Yahoo News Publishes My Steemit Article, and Now, I'm Being Attacked by the "Kremlin!"

Breaking news for my fellow Steemians! Yahoo News just picked up my Steemit article that was originally published by InvestorPlace Media, here -- http://investorplace.com/2017/06/facebook-inc-fb-fear-social-media-kingslayer/#.WUG1jdyQyM- Folks, this is as big as it gets! The only thing bigger would be a feature on The Wall Street Journal, which they wouldn't do anyways because the blockchain threatens their staid, antiquated business model.

Once I realized the true potential of the blockchain, and the reality that I could make serious money on the Steemit platform, I knew that the glory days of Facebook, Twitter, and Snapchat were coming to an end. Facebook still has a great chance to make long-term gains, but the problem is that a mass exodus could occur once people recognize Steemit's monetization capacity. 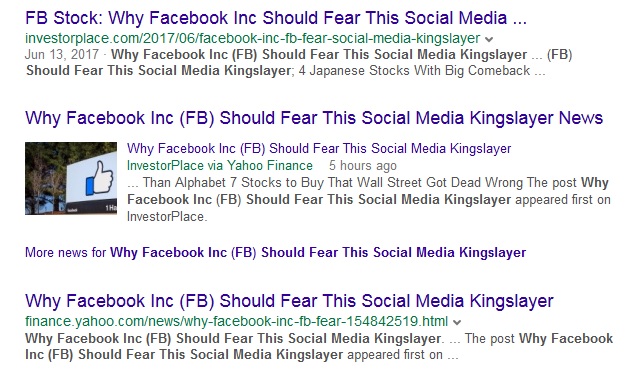 Steemit truly sells itself, but in order to sell, someone must know what they are buying. Organically, an opportunity came up at InvestorPlace where I could write about Facebook stock, but discuss the very real potential of Steemit impacting both FB and the social media industry.

From there, it was a matter of doing some research, gathering evidence, and "doing my thang!" I'm really pleased how the article turned out, and that I was able to bring mainstream attention to this awesome community!

Of course, not everyone was happy about Steemit finally receiving mainstream coverage. Yahoo trolls -- or as I like to call them, the Kremlin-bots! -- immediately sought me out and attacked me. Here's a sample of their handiwork, and I'm sure there's more to come...

I laughed! I take encouragement for the fact that a) I'm going to make money off these idiot trolls, and b) we really must be getting to them! Imagine a future where the majority of social media content is delivered via the blockchain. Putting out crap content -- like these assholes -- won't profit them anything, and they'll eventually suffocate out of the system.

After dealing with YouTards for years on end, this is music to my ears!

Oh Whales, Where Art Thou!?

I need some help. I truly want to get this InvestorPlace article greater coverage. I call it help me, help us all! Can you imagine the good that it will do for the entire community now that InvestorPlace Media, Yahoo News, Google Finance, and other popular sites are running current, relevant coverage about Steemit and the STEEM currency?

I want to thank everyone that has already seen and shared the article. I'd especially like to reach out to the whales -- if you can use your influence in spreading the word, it would help tremendously! After all, this is a win-win situation across the board, and it will catalyze Steemit (and STEEM) to unprecedented volume and engagement levels.

For your convenience, the InvestorPlace article is here -- http://investorplace.com/2017/06/facebook-inc-fb-fear-social-media-kingslayer/#.WUG1atyQyM8

news steemit steem story blockchain
3년 전 by bullishmoney63
$100.36
100 votes
댓글 남기기 48
Authors get paid when people like you upvote their post.If you enjoyed what you read here, create your account today and start earning FREE STEEM!
STEEMKR.COM IS SPONSORED BY

Thanks for what you have done for steemit

That is fucking CRAZY NEWS!!! Where are All The Whales???

Yesterday was just not a good day. Unfortunately, the overall traffic was mediocre so I won't be able to write about Steemit until it really generates attention on its own. It's a shame because more people were interested in the potential of a mainstream Steemit article as opposed to its actuality!

I have seen the whales come in on the 2nd and even the 3rd day!

Nope. I'm not taking any shit from them and doing a minstrel act to pretend that that snub wasn't insulting.

Oh you mean on IP article.

I got you now. You know they don't want the TRUTH!

(mainstream is going to be ruled by the MAINSTEEM)

No, I mean that I'm actually getting snubbed on Steemit. I'm honestly barely keeping myself from boiling over. There's no way that the mindless crap and known con-artists are going to support Steemit; they're in it purely for themselves. It's mainstream credibility that will get us to the "mainsteem," as you call it.

Well, hello? I just did exactly that. This particular work warrants special consideration for the effort that I put in and making the very lonely case for Steemit.

One of the things -- of the many -- that bothers me is that I could very well have bashed the shit out of Steemit, and I would have received widespread adoration for it. Instead, I stuck with what I firmly believe is the truth. Supposedly, that's what Steemians want -- a chance to be heard. Again, hello, I did just that.

I mean, for God's sake, I didn't even advertise my own screen name ... I instead called out regular, hard-working Steemians.

Everybody need the whales! Where are they!

Niiice good for you man,let the waves we make be heard!!

I'm doing everything I can! :)

Nice work. I'll help you get the message out.

Thank you! That would be very much appreciated! :)

Everyone, lets start sending this article and the others as the memo on small transactions to the whales, post them in the chat, re steem them. Do anything you can think of to draw as much attention as you can . This is a big deal.

Thank you so much! The one thing that Steemit was so far lacking was proper mainstream coverage, and I wanted to do my part. I'm so grateful for your enthusiastic support! Frankly, I was thinking that this would have taken off a lot earlier, but maybe the whales still need to get back home from work! :) 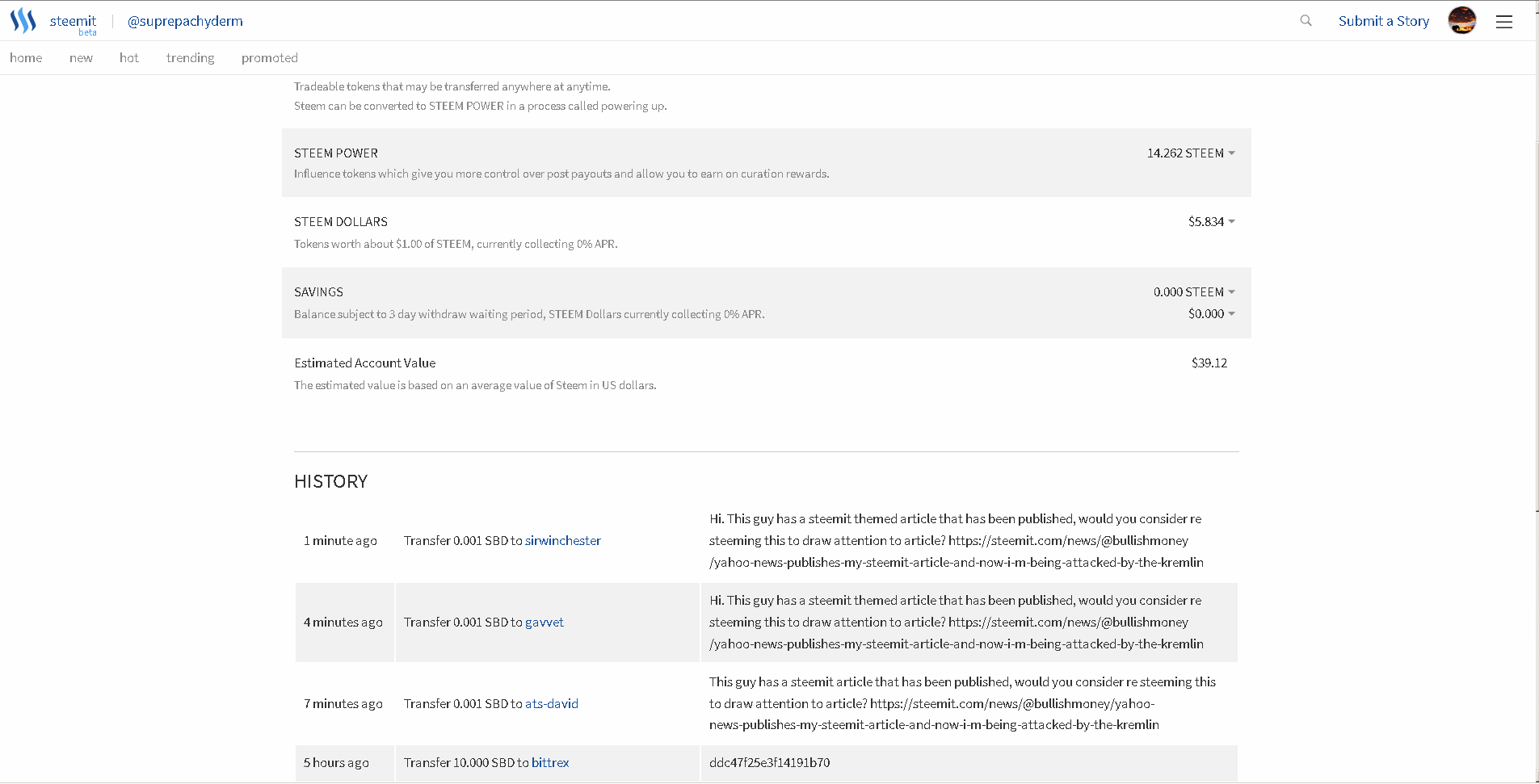 One of the best post of the day on steemit, thanks @bullishmoney! 🙌🏼🙌🏼🙌🏼

Haha! That would be something! :)

Cyka Blat! thats all russian i know haha besides semiliota is airplane and Dvatset Dva is 22 from watching WIngs of Russia documentaries on the fifth gen russsianstealth jet the Pak Fa T50 Sukhoi and they ept talking abot the F22 raptor and saying Ef Dvatset Dva so i knew that meant 22 hahah i am guessing you are talking about steem price going to $5!

I love russian weapons and airplanes
I Cannot WAIt for the Pak DA Hypersonic Bomber! One day america and russia will just have wargames using robot tanks and aircraft on some island where we will test out alll our wepons on real War Games where we will play for a cash prize and Bragging rights, it can be a huge evvent like the Tank Biathalon where russia invites american tanks to compete in races but american taks are slower so we would loose! haha

To hell with Facebook, it's the most dangerous social media on the planet.

welcome to steemit ,we happy to have you here!!!!
@follow

holy shit i must resteem this

Thanks for the enthusiasm! Unfortunately for me, the payout period is over, but yeah, you can resteem if you'd like! To be honest, it didn't quite generate the eyeballs that I thought it would...

Ok well, you still get paid after the first 7 days! the post can still be upvoted more and make more money and you will get even more steem from it!
or ddid someone tell you otherwise? Id like to know, cuz i know ive seen past posts of mine go up after the 7 days, ive only seen posts from before last hard fork some psost from like 9 months ago i cant upvote the price up, its weird, but i still can upvote this post and price went up!

Honestly, I have no clue! I was under the assumption that after 7 days, it's done and over with. Of course, I would love to be wrong on this! :)

Thank you for what you did ... it really does mean a lot to me because I spent considerable effort bringing positive attention and support to this community! :)