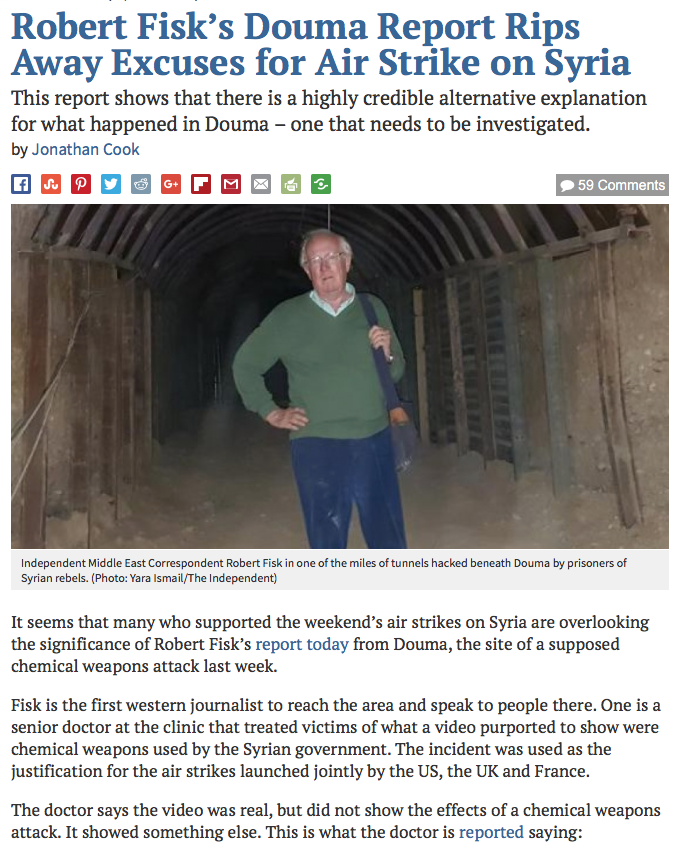 Robert Fisk after talking to doctors: 'There was no chlorine attack in Douma. Video was real but there was no gas poisoning."

Lord West, Former head of the British Royal Navy states it was likely a false flag involving the White Helmets - "Chemical attack doesn't ring true. What benefit was there. In the past some of the Islamic groups have used chemicals and there would be huge benefits for them. The White Helmets are not neutral. They are on the side of the groups that are fighting Assad."

Sky News UK Abruptly Cuts Off General Johnathan Shaw Former Commander of British Forces in Iraq Over Syria Comments - "The debate that seems to be missing is what possible motive might have triggered Syria to launch a chemical attack at this time, in this place, ya know the Syrians are winning. General Vogel at CENTCOm has stated that Assad has won this war. We have to face that." 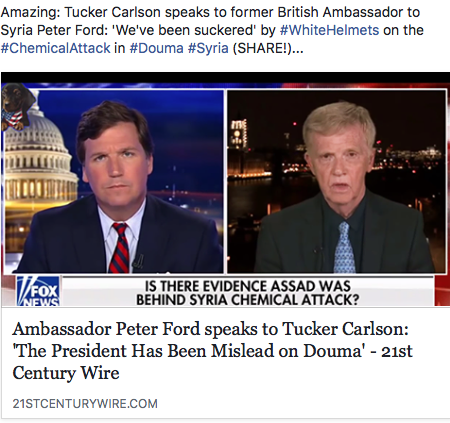 Tucker Carlson interview with Peter Ford former British Ambassador to Syria - "Why Would He Do That??" (Tucker NOT Buying the Syria Narrative). Peter Ford - "There are reports from western journalists in Dhouma yesterday that they could find no folks who could confirm that there had been a chemical attack".

Excerpt: A senior correspondent for German state media broadcast ZDF heute stunned his European audience during a report from on the ground in Syria when he gave a straightforward and honest account of his findings while investigating what happened in Douma. The veteran reporter, Uli Gack, interviewed multiple eyewitnesses of the April 7 alleged chemical attack and concluded of the testimonials, “the Douma chemical attack is most likely staged, a great many people here seem very convinced.”

It appears that all local Syrians encountered by the German public broadcast reporter were immediately dismissive of the widespread allegation that the Syrian government gassed civilians, which the US, UK, France, and Israel used a pretext for launching missile strikes on Damascus.

ZDF heute: The world continues to puzzle over whether the banned chemical weapons were used in Douma. ZDF correspondent Uli Gack is in Syria for us: “you were in a large refugee camp today and talked to a lot of people – what did you hear about the attack there?” Gack responded, “the Douma chemical attack is most likely staged, a great many people here seem very convinced.” 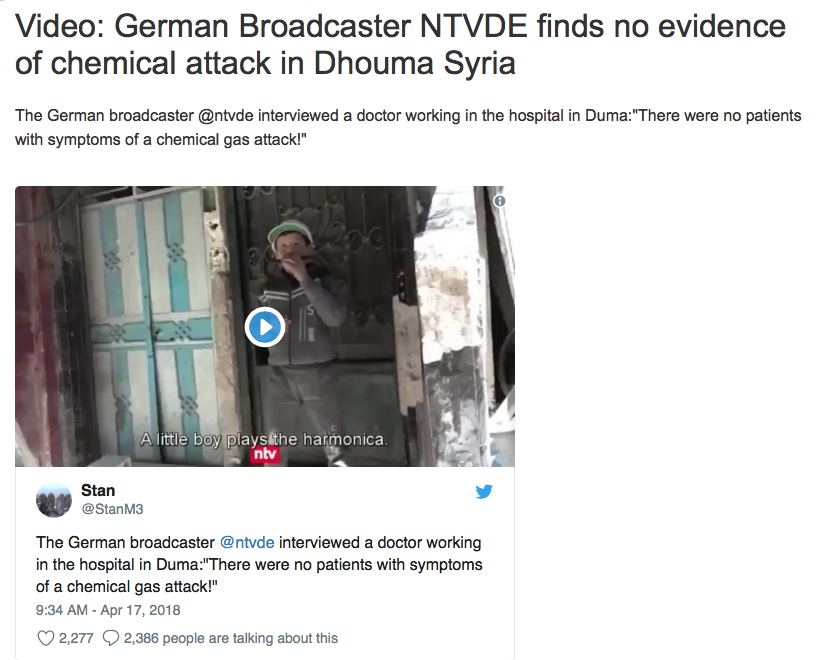 Peter Hitchens on Newsnight with Andrew Neill - "There might be a temptation to stage such attacks. These major nations act in defiance of law. They are providing a temptation to these Islamist groups in Syria. If the western countries are prepared to launch attacks based on the words of groups in Syria (interrupted by host), then the people that would be prepared to fake the attacks would be the Islamist groups. Check your research on that. They've given you a bum steer".

Tucker Carlson Goes on Epic Rant Against War in Syria

Syria Voice of Reason Accidentally Allowed on MSNBC - Jeffrey Sachs "This is a US mistake that started seven years ago. We know they sent in the CIA to overthrow Assad. The CIA and Saudi Arabia together in covert operations tried to overthrow Assad. It was a disaster. Eventually it brought in ISIS as a splinter group to the jihadists that went in, it also brought in Russia. So we have been digging deeper and deeper and deeper. What we should do now is get out. Seven years has been a disaster".

In Wake of Fake Chemical Attack in Syria: Atlantic Council Outs Russian Bot Only To Find Out It Is A UK Citizen Angry With Own Government

BBC Breakfast Show -"No shred of legitimacy. This is a war crime" Peter Ford on BBC N. Ireland

Article by Craig Murray, the Former UK Ambassador to Uzbekistan- An Index on Disgrace (Article on media attempts to disgrace academics and researchers reporting the truth about the Syrian war and the White Helmets, labeling them as conspiracy theorists and Assad apologists. Antimedia.com article - There's a Good Chance We're Being Lied to About the Chemical Attack in Syria

Really Graceful channel - The Lies They Told Us About Syria 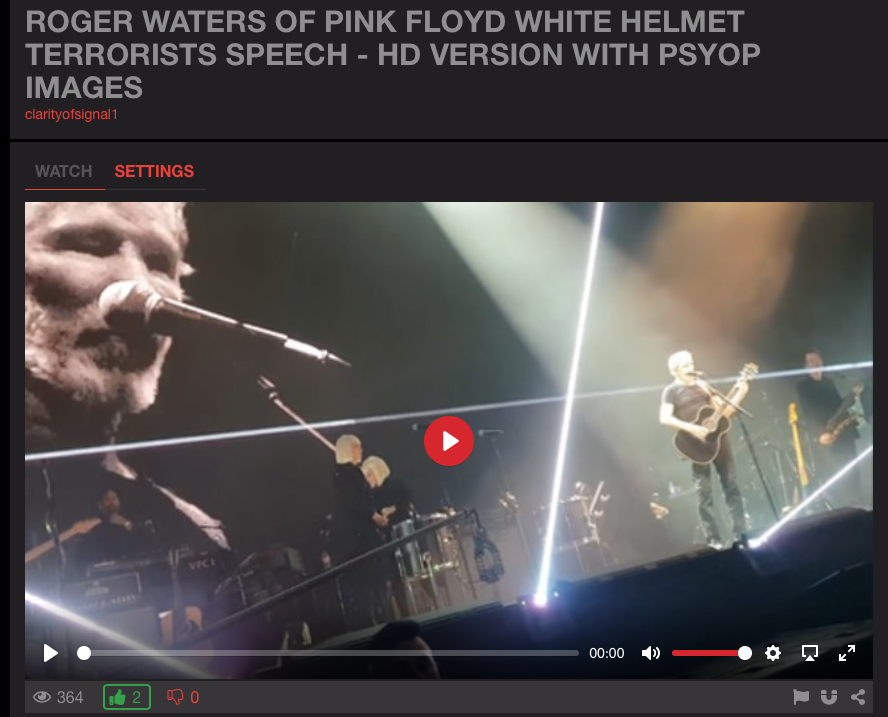 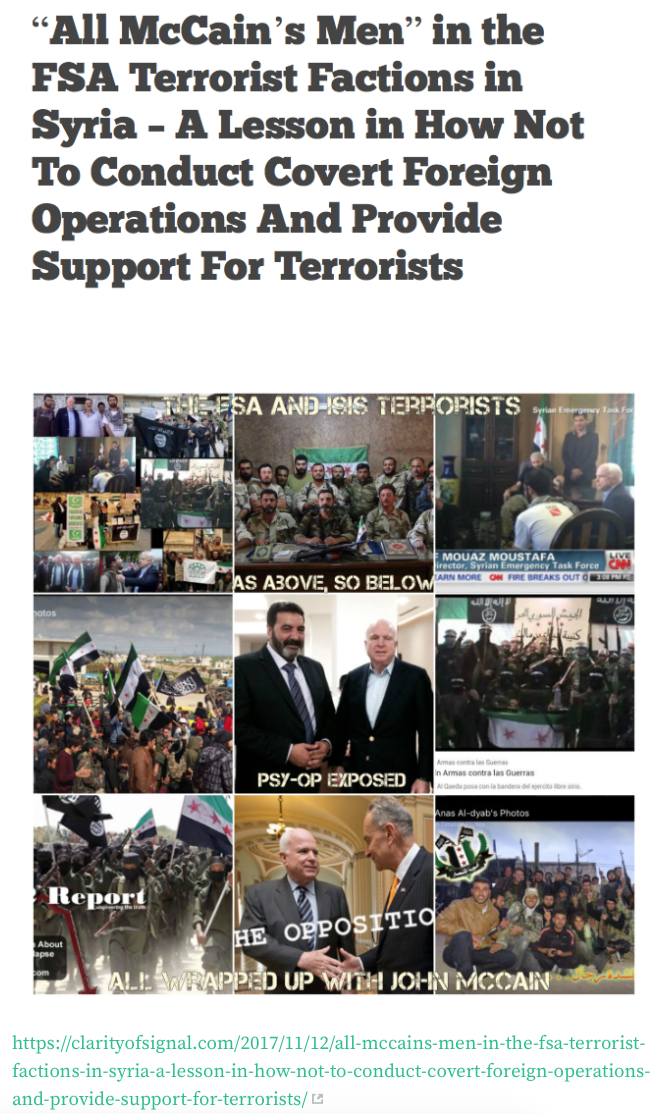 news informationwar syria psyop
3년 전 by clarityofsignal63
$48.62
49 votes
댓글 남기기 17
Authors get paid when people like you upvote their post.If you enjoyed what you read here, create your account today and start earning FREE STEEM!
STEEMKR.COM IS SPONSORED BY

Another vast compilation of quality material. A few interviews that I haven't even seen. Sure this would have taken considerable time and effort. It is much appreciated.

These compilations are very much appreciated, cheers.

I got called a nut by a “friend “ for sYijg the white helmets are terrorists... people are literally brainwashed! It’s getting worse then ever b4!

Btw thank you so much for taking the time you do putting all this together. It’s amazing to have sources to show to people Especially all in one place.

Dear Christopher, more great material on the White Helmets. I think now, they are pretty much finished,as they've been exposed worldwide for the fraudsters that they are. I doubt they will attempt or be able to pull anything off in the future.

Hope all is well with you.

I wanted to ask you a favor, if possible. I've been attempting to expand my repertoire a bit by posting a guide to cryptos: Beginner’s Guide to Cryptocurrencies / Blockchain, Wallets & Exchanges but this post has received very few views & upvotes, or comments :( Thus, I was wondering if you would consider re-steeming it on your blog since you have many more viewers. I really think it is of quite good quality, as I've researched things a lot and tried to write them in an easy and understandable way for all to comprehend; my goal being to get more people into the crypto-freedom space. Pls let me know. Thanks!

Thanks Dan, will do. Resteeming it now. And yes it is becoming much more difficult for the White Helmet terrorists to get away with their murderous agenda. I hope the dam breaks fully soon. Kind regards.

Invaluable information to the truth seekers! Thank you @clarityofsignal. You always do such a thorough job of researching and putting all the information together. It's been such a relief since One America News Network has arrived there and started breaking open the story in front of media. Thanks for compiling all the data.

You are very welcome @angelfish. Pearson Sharp has really done a great service for humanity going there and getting the real story. It is incredibly important right now. Glad to see him doing it. His traveling to Syria will hopefully also make the elite think twice before they conduct their next false flag.

Reteemed and re-posted (the link) at Gab. Hope many more read...

Thanks for helping getting the word around @Arthur.grafo

Fantastic, superb and brilliant 100% upvote and resteemed with pleasure.

I just found this thread and I’m gonna spread it far also! It’s amazing having so much information and sources in one place. He really outdid himself! I look forward to following this accounts material daily!

Superb, thank you, enjoy. We are keeping it real on the blockchain.

Curated for #informationwar (by @openparadigm)
Relevance: False Flag
Our Purpose

Hey @clarityofsignal, great post! I enjoyed your content. Keep up the good work! It's always nice to see good.
And this news really helpful for all.