After 56 years of the same uniform on the Oscars stage! 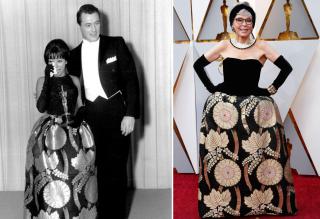 The stars kept the most attractive clothes in their almirahs for the Oscars. Many people make clothes by ordering from big designers to walk in the red carpet of this huge event. One of the most respected award in the film world, how to wear a dress at the Academy Award, how to decorate it, I do not think how many actresses sleep in the night is haraam. And there was an old actress Rita Morino, a 56-year-old gown! He also appeared in Oscars again once again in the same dress. Of course, after so many days there is a special reason to wear that dress.

Puerto Rico's actress Rita Morina is one of the only 12 artists in the world, who also won Emmy, Grammy, Oscar and Tony Awards. In 1962, she received the best side-actress Oscar for the musical film 'West Side Story'. Rita, who took the Oscars after the ceremony, had come after this year. In Lalglichaya, he told the presenter Ryan Sikstrst that. His lower part of this garment was made in Japan's traditional costume Kimono Style.

At the 90th Academy Awards, Rita Morina gave the best foreign language film prize. The category won by Chilean film 'A Fantastic Woman', directed by Savassian Leleo. This is the first movie to receive an Oscar in Chile. CNN

90th Academy Awards
Prior to the bad work before jerk

Fajur himself is inspired by militant ideology: IGP
Bangladesh

news life bitcoin new esteem
4년 전 by mdsakil123434
$0.00
2 votes
댓글 남기기 0
Authors get paid when people like you upvote their post.If you enjoyed what you read here, create your account today and start earning FREE STEEM!
STEEMKR.COM IS SPONSORED BY