Breaking: US Wants War With North Korea - "Self Restraint" Is The Only Thing Stopping Them In the wake of an ICBM test launch from the North Koreans,

Dan Dicks of Press for Truth breaks down the latest news while pointing out that "a US attack on North Korea right now would be absolutely devastating causing certain retaliation on the US and possibly others like China and Japan not only causing untold millions to die in the process, but it will create a massive influx of North Korean refugees."

news anarchy trump life pressfortruth
4년 전 by pressfortruth74
$190.90
186 votes
댓글 남기기 37
Authors get paid when people like you upvote their post.If you enjoyed what you read here, create your account today and start earning FREE STEEM!
STEEMKR.COM IS SPONSORED BY

On my youtube channel recently Xander vM posted this comment. I feel its many peoples idea around the world. So here is my input Xander vM commented
North Korea should fall though. It's not going to fall by itself. Its an evil repressive regime, its like a toddler with a gun now. We should attack it sooner rather than later
Reply

slippybits replied
I try to look at countries like I do my neighbours. I would not come around to their house and dictate how they bring up their children or treat their wife, what they eat, drink or that they should not make weapons to defend themselves. But if my neighbour comes into my garden being hostile or stealing then he is going to have to expect retaliation. I would expect the same from them if I went to their house with the same concept in mind..

First of all what would you do if you were handed leadership of N.Korea? ' Its an evil repressive regime,'

Its crime and murder rate are very low. Its occupants are just as brainwashed as western society. Who says their society is not the right way to go? It does not appeal to me either but I don't see the people uprising. I have never been to North Korea and what I have seen in the news I cannot rely on even the wiki page on crime seems a bit dubious, but again its not for me to interfere.
Some maybe facts and others Bullshit just like the West told lies about Gaddafi and Saddam. Look at what the West did to those nations.
If your neighbour had obliterated your other neighbours house and killed most of its occupants should you really be more concerned about that?
I would say Saudi Arabia is very similar in evil and repressiveness and attacking and destroying Yemen. Israel too is actually bombing and has Nuclear weapons. But the world isnt bothered about invading them?

Maybe you should start asking yourself why! N.Korea is all mouth so far.(your neighbour shouting abuse over the fence) Its protecting itself and hasn't stepped into anyone's garden with threatening behaviour. Some neighbours have bought or build hand grenades to protect themselves from other nations attacking or stealing their resources from there gardens. N.Korea is now doing the same.
This attitude of lets bomb our neighbours before they become a threat is becoming the norm. Have we not learned that doing that is NOT the way we should go.

Would you like it if your neighbours decided to destroy your garden because they did not like your way of life?

What do you think?
I am also looking for followers ans upvotes to make this steemit account a little lucrative! Your help would be much appreciated

I hate war, I don't wish anyone death, I know it's not that simple and people want war. I just wish there was another way.

North Korea is a big threat. But if you drop everything that newspapers, television and the Internet tell us. And look at what's happening in the world from the other side, then you'll see that for all the time North Korea has never launched missiles and has not fulfilled its Threats. But the US only does that they are fighting and killing people. Remember at least the last 10 years. This is Iraq, Libya, Afghanistan, and now and Syria. In Syria, they are illegal. In addition, the Nakh has a lot of secret prisons around the world, where people are tortured and tortured. Obama also promised to close the prison in Cuba. It was his pre-election campaign. So what? Has it closed? No. Now they have an aggressor in Russia. And what did Russia do? Nothing that can be qualified as an agression.

People are smarter. Think with your head. Do not believe fake. And you will understand that not all the truth is told to you.

The United States would really be stepping up their edge-game if they were to launch an attack against North Korea.

Up until now they have never attacked a nation that they 'truly' believed had WMDs (Hence why they were never found in Iraq - I'd be surprised if anybody above the ranks of the 'boots on the ground' were unaware of truth).

The only way they'd engage North Korea directly is if they were confident that they could neutralize the true WMD threat prior to invasion.

And then a central bank would get founded in the aftermath. Just like in Libya, etc.

war is not the solition .

China, Russia, Iran want US to attack North Korea. They want North Korea to nuke South Korea and make the US look bad on the world stage.

If USA can test long range Missile then why not rest of the world? for there peace and safety? actually world top countries are playing dual injustice role now thats why country like North Korea take it serious.

This is terrifying, the global tension just continues to escalate. I hope we can find a way to see this all end peacefully

What?! Is this for real? That’s crazy!

It is especially crazy considering North Korea is collapsing from the outside in! We literally do not have to do anything and Kim will fall. If we get involved we could start another giant war; diplomacy works people!

Yawn...almost everyday when I surf the mainstream news websites there's DOOM AND GLOOM about North Korea.

If somethings going to happen it's going to happen...wasting your energy (mental, spiritual, physical) paying attention to this repetitive CRAP does YOU no good! It bogs down your mind with negativity and subconscious fear.

This kind of news is like "crack". It's an addiction.

Listen, i agree with a friend who told me that the biggest offender in the world right now is the United States government, so far nobody has committed more atrocities in the name of Keeping peace than the U.S.A... Beware!!!

I think a preemptive strike on North Korea would be absolutely insane. Just one point is that Seoul is 35 miles away from the border. Imagine if they managed to respond with a nuclear warhead.

One way or another, we really have to get cooler heads into these decision-making positions. At least the new president of South Korea wants dialogue. 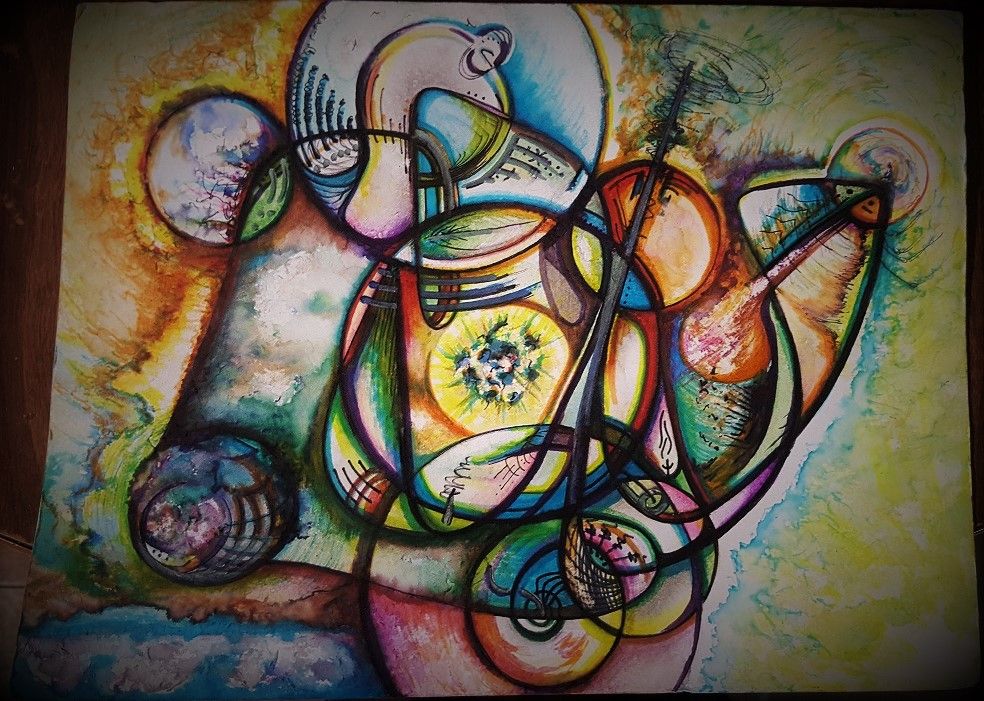 The US can't stand a nation that doesn't let it dominate them. Doesn't matter if that nation is good or bad, it is not the business of the US to interfere with it. Dialogue might work. The most disastrous thing to happen in recent decades is backing dictators against the wall and giving them no option but to dig in and fight. This is going to bite the US in the ass, but they are too stupid to see it.

I don't think we need war. Honestly Kim isn't dealt with to avoid the refugee crisis that would come after. However I think China needs to get on board with US or it may be time to end it. I don't want many innocent people to die before we act. North Korea has threatened ecen if they haven't acted and their people have beem dying in inhumane ways.

People act as if the US would be the bad guys but North Korea proves that laws are useless. They have been violating the laws of their people with no consequence because the US fears retaliation. Their actions prove diplomacy is not the answer with them. I hope war does not break out but if it does I will not blame the US for whatever happens. Atrocities are happening right now even if we don't see them mentioned in our media outlets. Whatever happens lets just hope it happens with thr least amount of victims and with a bright future for our world.

Strongly support to US. Kim jon is doing whatever he wants. it is really really the time to smash on his back. Go Ahead USA and crush because he has been warned multiple time.

North Korea is a serious threat to World peace and mainly because of an irrational leader. His provocation is clearly with an intent of either the World submitting to his demands or disruptions to everything else. I pray that a war is not started because of a stray missle during all the tests to show their powers.

@alexthemagician (The U.S.) "...is a serious threat to World peace and mainly because of an irrational leader. His provocation is clearly with an intent of either the World submitting to his demands or disruptions to everything else. I pray that a war is not started because of a stray missle during all the tests to show their powers."

Let's why would they want to invade North Korea? Covering up the collapse? Or going after the rare earth metals reserves? Or maybe taking over the poppy fields there? Remember the war machine needs an enemy to justify it's existence so you don't around doing regime change without a damn good economical reason. All wars are banker wars.

Either way, the elite will win. They have an agenda to pull and one way or another they will accomplish just what they want since most of America is dumb down and glued to their televisions​​ being programmed to react and act exactly how they want us to. I refuse to be a part​ of what is coming.

US doesn't want a war with NK because it will be WW III. US wants to control over 6 trillions of natural resources. https://steemit.com/northkorea/@euni/north-korea

Set up to feel frightened and justify defense budget. They don't even have public street lights, but fleeing in droves and theb they handle nuclear program for so many years

This was a great post. Thank you for sharing. I'll be sure to keep an eye out for you future work!

US should not start a war with N.korea, In case of war n.korea will certainly loose, but this fat fu*k is crazy, in process of war he will demolish the life of millions, so what's the solution for n.korea situation? Internal revolt just like soviet union