Welcome to The Daily Wrap Up, a concise show dedicated to bringing you the most relevant independent news, as we see it, from the last 24 hours (5/8/18).

The US has officially withdrawn from the JCPOA, the Iranian nuclear deal, and subsequently levied “the highest level” of economic sanctions on Iran. Trump stated that anyone who helps them to move forward with what was in all actuality their civilian nuclear energy program, will also be targeted by US sanctions.

Trump went on to reassert the same tired and verifiably false claim that Iran is the "leading state sponsor of terror." He also accused Iran of funded terrorist proxies to carry out its agendas around the world... now who does that sound like? Trump claimed that Iran was "plundering the wealth of its own people" ... again, is he talking about Iran or reading from a US to-do list?

Trump goes on to state that Iran has "continued to enrich uranium," as if to imply that such an act is not allowed within the current deal, and this is intentionally meant to manipulate those who do not understand all the ins and outs of the current agreement. There is a major difference between a nuclear military program and a civilian nuclear energy program, both which require enriching uranium. Doing so for the energy program, which the IAEA verified was the case in Iran, was perfectly allowed within the parameters of the Iran deal. So this was a blatant attempt to mislead those unaware of that fact in order to muster support for this move.

The most shocking aspect (at least to me) of Trump's overwhelmingly propagandized speech was when he claimed to have "definitive proof" that Iran was working toward a nuclear weapons program -- and then referenced Israel’s fake “proof.” Trump did this even though the US already backtracked on supporting those claims, going as far as to delete their tweet in this regard, and changed their press release claiming it was a “clerical error.” Yet, here he is saying it is now definitive. Are they really this bad at what they are doing? I just find that hard to believe.

Trump’s entire speech, as usual, was chock full of words meant to invoke an emotional response; because this was not about facts and the truth, it was about manufacturing support for yet another unjustified regime change. That of course is done with programmed moral outrage and outright lies, as we have seen many times in this nation's history. Next was a laughably disingenuous message to “the long suffering people of Iran, the American people stand with you.”

Except that the US government openly and actively supports the MEK, a group the Iranians vehemently oppose, and the Trump administration has already banned Iranians from the US.

As an article by the Anti Media put it today:

Perhaps the most absurd aspect of President Trump’s Iran policy is his attempt to claim solidarity with the Iranian people, even as he bans Iranians from the U.S. and his top advisors openly support the MEK terrorist group that is universally reviled by Iranians. The Iranian people overwhelmingly supported the nuclear deal, at least until the sanctions relief that was promised failed to materialize, and will be the party most impacted by Trump’s decision.

A potential opening for accelerated progress in Iran has now been slammed shut by Trump, an action that will redirect attention from the Iranian government to the United States. This will not just empower hardliners, it will force Iran’s political elite to paper over fissures on key social and political issues while cracking down further on any dissent. This is potentially the biggest crime of Trump’s decision – limiting the agency of Iran’s own people to choose peaceful political evolution in order to address their grievances.

Trump finished by saying, "there has been enough death and destruction, let it end now." So I guess by "let it end," he means more war and yet another destabilized country added to the long list of decimated nations “liberated” by the US.

Trump literally said in his speech that “the future belongs to the Iranian people,” followed by all the usual jingoistic words and phrases meant to rile up the blindly patriotic into thinking the US is simply out there spreading freedom to the oppressed, even while we lose what little we have at home. This lie, meant to elicit a specific emotional response, has been shown to be such utter BS over the many years of regime change, coups and assassinations. Without fail, these efforts leave the country of focus in absolute ruin, until the US gets what it wants and moves on, leaving the people it claimed to be fighting for to fend for themselves, as the power vacuum left in its wake sucks in all the surrounding extremists that the US will later support in its feigned fight for freedom.

Libya is the perfect example, as the people who the US claimed it was trying to “liberate” from Gaddafi, are the same ones currently being sold in the open slave market being maintained by the groups the US funded and supported, in order to overthrow Gaddafi. But we don’t hear about that, we just move on to the next country and never look back -- but we have to start looking back.

I truly believe this is simply a way to essentially force Iran into pursuing a military nuclear program as a way of absolute self-preservation, as opposed to the civilian energy program that has been verifiably under way. This despite the proven lies of Israel and the US capitulation to those lies, all in order to carry out what has been shown, a hundred times over, with documented evidence to support it, to be the long sought western plan for Iran. Which all the US actions up until this point make abundantly clear.

The Trump administration even tried to claim a while back that Iran was not adhering to the nuclear deal, until that was easily shown to be incorrect, so they then simply shifted to saying "well the deal is bad, and that's why, forget the lie we just tried to sell you, it's that the deal is not a good one, that’s what we're going with now."

Despite the Iranian threats of action if the US pulled out of the deal, leading up to this point, it appears that Iran has said it will remain in the deal, stating that the US actions are illegal, and they are choosing to simply deal with other countries for a new nuclear deal. Iranian President Hassan Rouhani, says he has ordered his foreign minister to negotiate with other countries to maintain a nuclear agreement, showing yet again that they are committed to the deal that the US just openly tried to sabotage, all based on clear lies and propaganda.

As we saw with the Russian decision not to retaliate after the illegal and completely unfounded attack on Syria, which was based on the lies of the group it just defended, it seems the rest of the world is beginning to see the value in letting cooler heads prevail. Yet I have no doubt the US will ignore this step and carry out its agenda of regime change in Iran, the one it has sought for decades.

In regard to Syria, which Israel immediately attacked following the US move to pull out of the Iran deal, it is now being revealed that the US has pulled all the funds allocated for actual humanitarian efforts in Syria -- that which the US claims is the driving force -- and is once again putting it toward funding the US-backed terrorist factions in Syria, as well as adding another couple million on top:

Back in March, amid speculation that President Donald Trump would push for a withdrawal of U.S. troops from Syria, his administration froze $200 million in funds intended for “recovery efforts” in Syria. Those funds were intended to rebuild infrastructure such as roads, water lines and the power grid in areas of Syria decimated by U.S. coalition strikes.

Since then, the cutting off of U.S. “humanitarian” aid to Syria has continued, despite the fact that a withdrawal of U.S. troops from Syria is now highly unlikely.

New evidence, however, now shows that those U.S. recovery funds are still intended for use in Syria, though they won’t be going towards any humanitarian causes. According to a portion of the Pentagon’s budget titled “The Overseas Contingency Operations (OCO) Request and Counter-ISIS (Daesh) Train and Equip Fund (CTEF),” the U.S. has allocated $300 million to arm and equip 65,000 soldiers who are part of U.S. “partner forces” in Northeastern Syria. That area of Syria is currently occupied by the U.S. and its proxies, such as the Syrian Democratic Forces (SDF). What has been shown to be essentially the very same terrorists it claims to be fighting, only they are being funded and arms by your tax dollars in an attempt to overthrow the democratically elected Assad government.

The Pentagon’s request also calls for $250 million to be used in building “border security” in Syria, bringing the total request for military aid to U.S. proxies to $550 million, a figure significantly higher than the amount of “recovery funds” that was frozen.

The Pentagon’s request was approved as part of the budget signed into law by Trump on March 23. One week later, the Wall Street Journal first reported that recovery funds for Syria had been frozen. The timing of the request’s approval seems to suggest that the aid money was cut in order to be allocated to arming U.S. proxies in Syria — essentially a straight swap of “humanitarian” aid for military backing.

The U.S. government, once again, has revealed that its “counter-terrorism” strategy is not about stopping terrorism, but using it in order to fulfill long-standing geopolitical goals for Syria and the region.

So consider this, as the new regime change efforts in Iran and Venezuela, which was just the target of fresh round of sanctions, are carried out, laughably in the name of freedom.

Please take the information discussed in the video below and research for yourself, and come to your own conclusions. As anyone telling you what the truth is, or claiming they have the answer, is likely leading you astray, for one reason or another. Stay Vigilant. news conspiracy politics writing blog
3년 전 by tlavagabond73
$1.54
21 votes
댓글 남기기 3
Authors get paid when people like you upvote their post.If you enjoyed what you read here, create your account today and start earning FREE STEEM!
STEEMKR.COM IS SPONSORED BY

The danger here is not overestimating the risk of war.

It is underestimating it.

He did it all. So when he uses the language of war with Iran, dont discount it

War is not fair.
Thank you @tlavagabond for this post
I always read your good posts.
From @popyhq with best wishes. 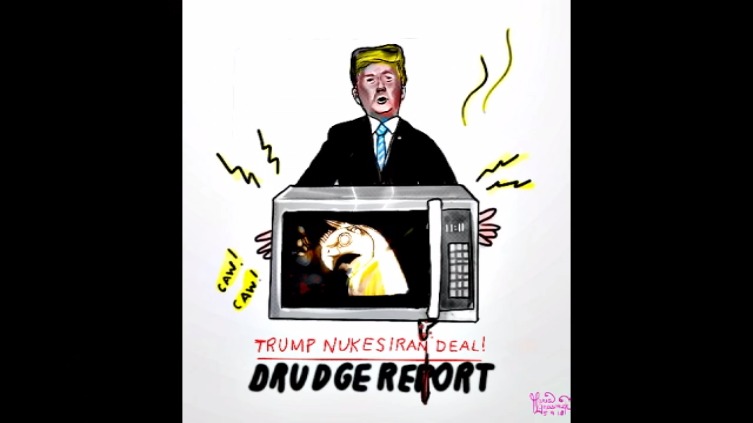