Barack Obama's favourite gum is Thrills. And although he will never admit it, Thrills is Donald Trump's preferred tweeting gum. The list of famous (and infamous) people who love this gum is long. It includes Kanye West, Peter Dinklage, Vladimar Putin, Angela Merkel, Jimmy Kimmel, and the Dalai Lama.

My family got me 20 packages of Thrills gum for Christmas 2017. I am not kidding. Do I have the best wife and kids, or what? Best Christmas Eva! 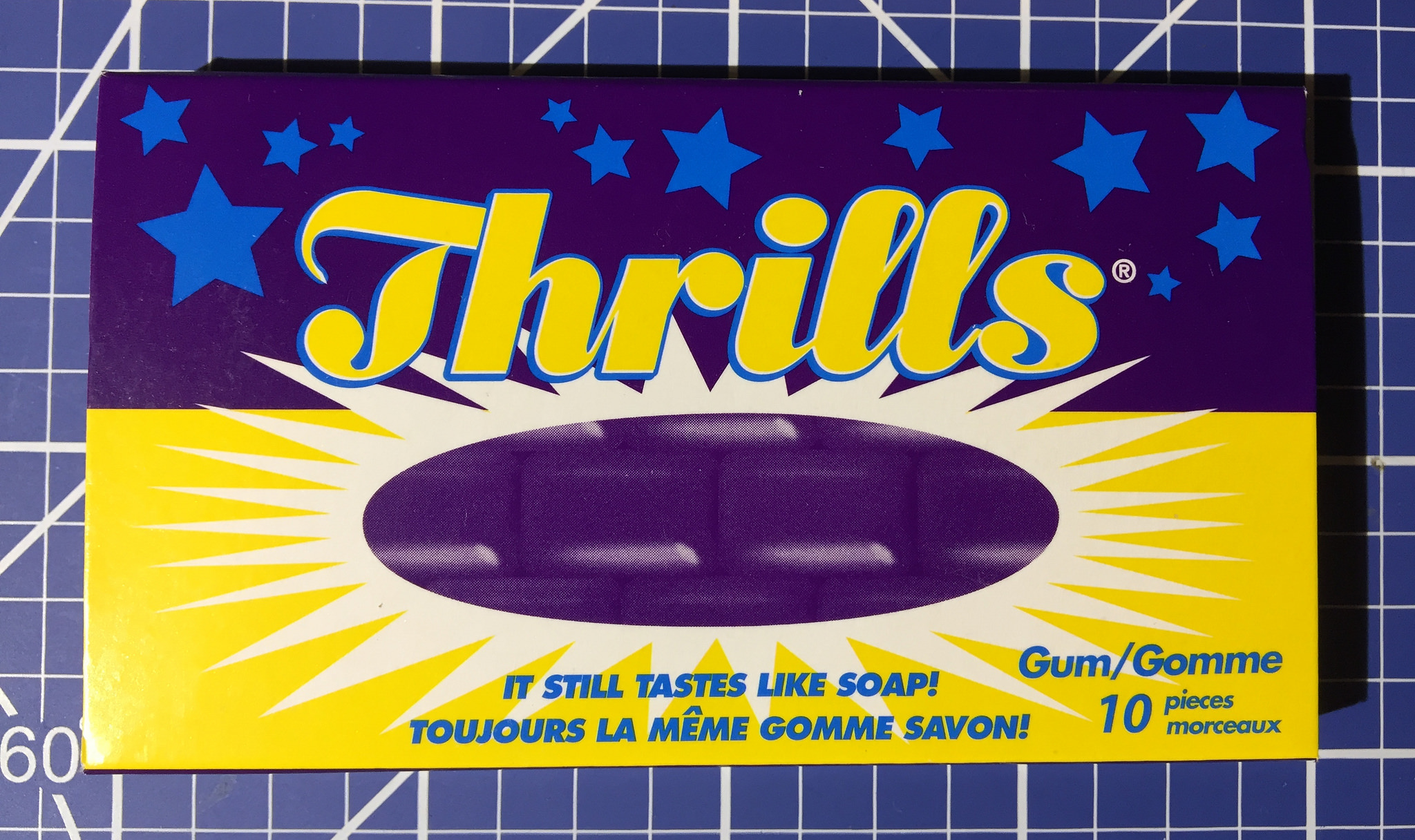 What makes Thrills so unique in the world of gum? Well, it tastes like soap. You either love it or hate it -- there is no middle ground. Oddly, the packaging even says, "It Still Tastes Like Soap!" 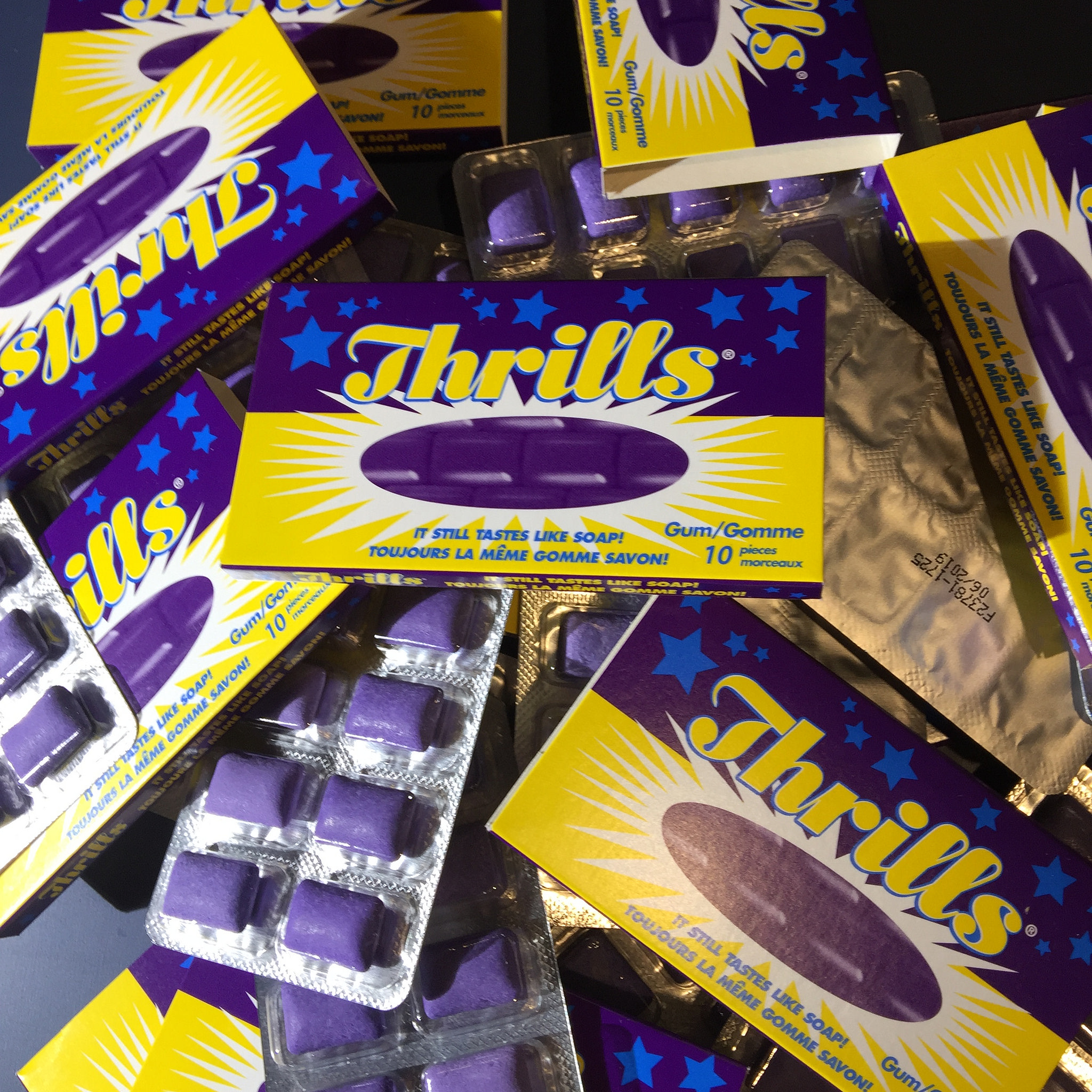 Despite Thrills being so popular among politicians and the nouveau riche, I am guessing most people reading this post have never heard of this tasty gum until now. Outside of elite circles, it seems to have been a uniquely Canadian thing. I had no idea of this until I tried to Google it. The Wikipedia article on Thrills is only five sentences long (as of Jan 2018). How is this possible for such a spectacular product??? This is mind-boggling!

I first encountered Thrills as a young child in the 1970s. I was no gum connoisseur, but I knew what I liked. In those days, Thrills was packaged like Chiclets. It came in a little cardboard box with a cellophane window so you could view the product (you know ... window shopping for gum). Now Thrills is packaged in blister packs like cold medication. Back then, there were no safety measures in place to prevent tampering with the gum. Imagine the horror of discovering someone had substituted a Chiclet for one of your Thrills ... gasp! I don't even want to think about that.

One time when I was about 10 years old, I stumbled upon a gumball machine that was filled with Thrills gum. This was no ordinary gumball machine -- it was broken. Someone had jammed some cardboard into the slot where the money goes. Thrills were free that day. Every time you spun the handle, more Thrills came out. I knew what to do ... Fill 'er up. I filled every pocket in my coat and pants to overflowing. Maybe it was the wrong thing to do. I looked upon it as a clearance sale. 100% off.

Believe it or not, I Iived through the 1980s and most of the 1990s without chewing any Thrills. I would call this "existing" rather than "living". When I finally came up for air around 2001, I discovered that they had changed the size of the Thrills pieces. Thrills used to be elongated and about 2x the size of a Chiclet. Obviously, Chiclets is an inferior gum. So, I was deeply disappointed to discover that the form-factor of Thrills had changed and they now looked just like purple Chiclets. Time is a healer and I eventually accepted the new shape and size. Still, I sometimes wake up at night in a cold sweat longing for the old Thrills.

Not only is Thrills gum delicious, it is also highly nutritious. It contains 2 grams of sugar -- your dentist will thank you for that. It gets even better. Thrills has only 10 calories per 2 pieces. Whoa! That's not a typo. And get this ... it is fat free! If you're on a diet, you cannot afford not to chew this gum. Thrills has the usual gum ingredients, but the one I love most is "carnauba wax". I choose to believe this is the source of the soap flavour. Wow, I can eat carnauba wax by the bowl. I'm currently sourcing bulk suppliers so I can get me a 55-gallon drum of carnauba. Ya, baby! 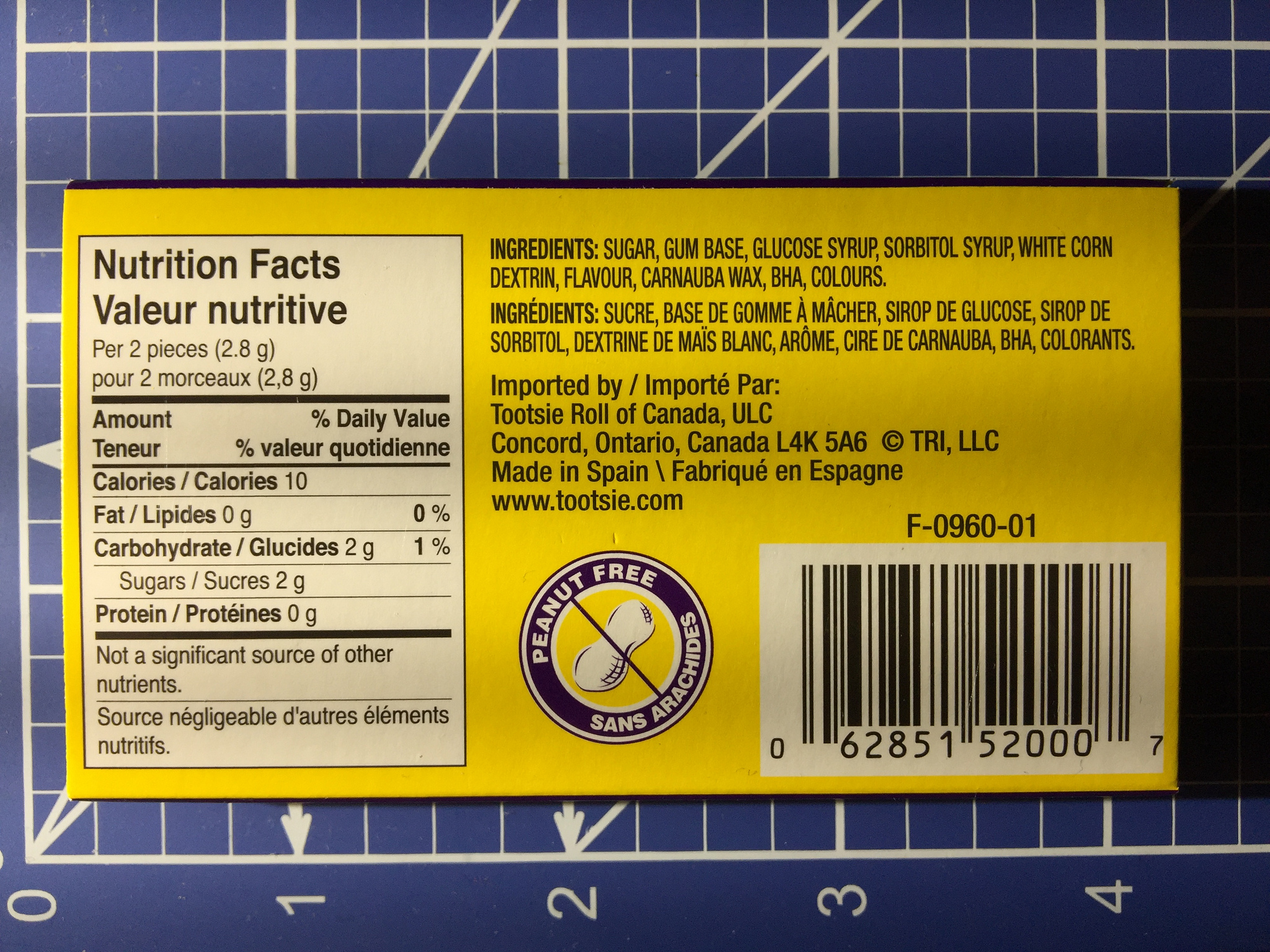 Notice that Thrills is "Made in Spain". I had no idea of this until recently. In fact, Thrills is their national gum. I have a renewed respect for the Spanish people.

The Gum-of-Choice at the G20 Summit

For anyone who has attended a G20 Summit, you know that you can't walk 5 metres without detecting the distinctive odour of Thrills. Every delegation is chewing the stuff. Furthermore, there is a strange kind of bond between politicians and protesters at the G20 because both groups are chewing it. The protesters swear by it because Thrills eases the discomfort associated with tear gas. Politicians insist Thrills is the best thing to combat Putin-breath.

In a clear statement of support for the gum, former British prime minister David Cameron made an impassioned plea in 2013 for Thrills to be included in humanitarian aid shipments. Notice his tie -- it's purple. Coincidence? I think not. 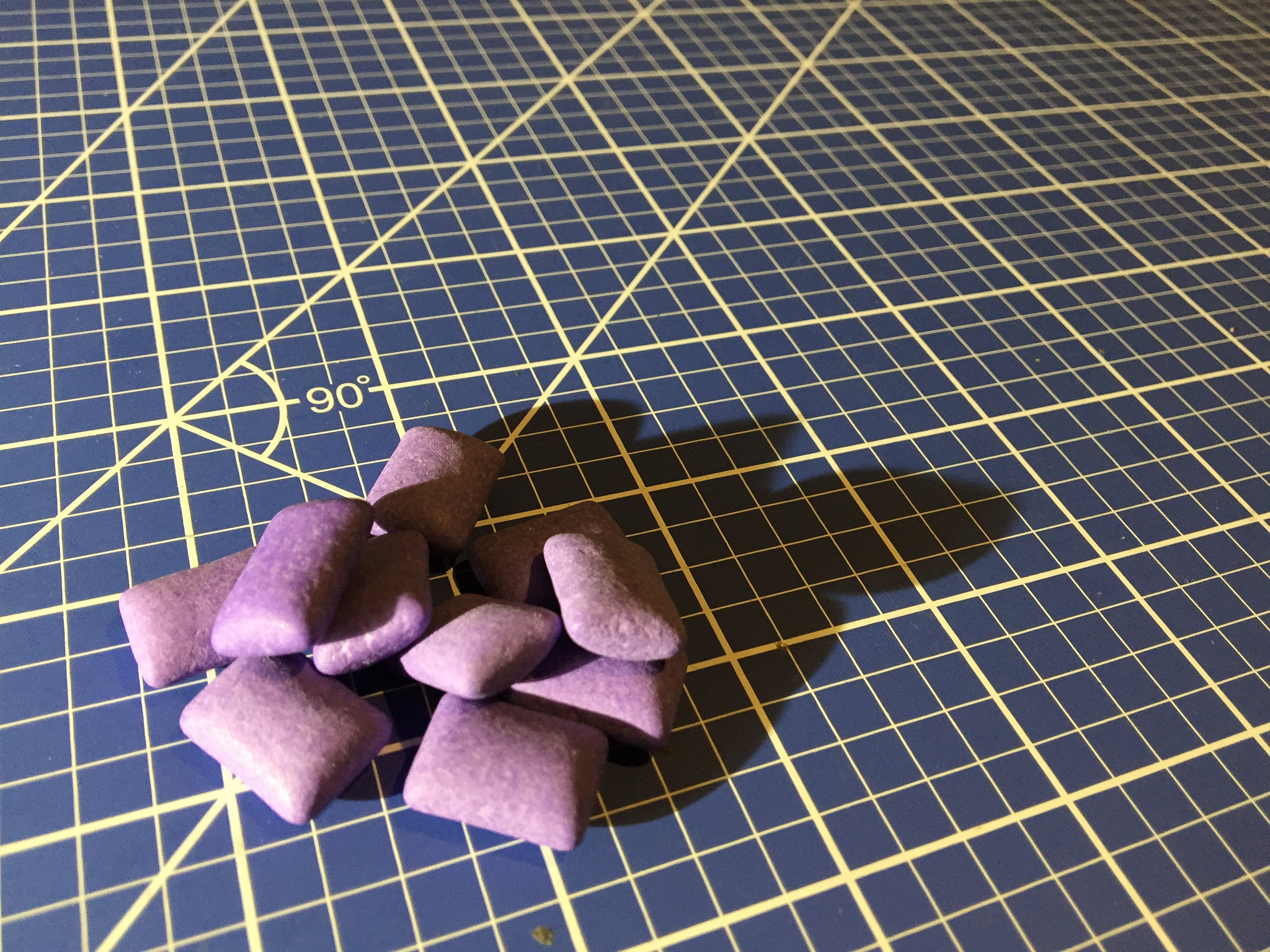 In conclusion, I just want to point out that Thrills is now Peanut Free. It's about time! You know what that means -- safe to chew at school! Yay!! I'll be sending my kids to school with an ample supply to pass out in class.

nostalgia funny christmas satire gum
2년 전 by opaulo59
$211.93
59 votes
댓글 남기기 19
Authors get paid when people like you upvote their post.If you enjoyed what you read here, create your account today and start earning FREE STEEM!
STEEMKR.COM IS SPONSORED BY

May be the next president is you :)

May Thrill bring thrills and happiness in your life :)

If you can get the constitution changed so that citizens born outside of the US can be president, I’ll be Thrilled to run against Trump or Oprah.

Looks like you can buy 20 boxes here on Amazon. I might have to try some... I'm intrigued by soap-flavored gum

You will either love it or hate it. For me, it is the best thing.

Amazing post, just followed, Follow me back and upvote my posts as well. Hope we can be good friends.

hahah interesting gum, nice to pass around for a conversation

Thrills gum used to be made by the O-Pee-Chee company of London, Ontario, Canada. About 10 miles from where I used to live. The smell coming from the factory was awesome! O-Pee-Chee was bought by Nestle in the 1980's. It has always been that purple gum that tastes like soap. That flavouring comes with the addition of rosewater. They used to allow tours of the factory and people got to smell and taste the rosewater. I did not it had moved to Spain. A loss for Canada!

I was shocked to see Spain on the packaging. Imported by "Tootsie Roll of Canada". Odd.

haha this is a super funny post. Thanks for getting this info out there. I'll pick up pack next time I see some. I bought some chiclets today cause I hadn't seem them in awhile. Super good ;)

I'm off gum - I had to go cold turkey due to TMJ problems. But once every 2 or 3 years, I fall off the wagon and I chew a pack of Thrills. I think we should lobby to have it brought back to Canada. Make Canada great again!

I suspect most Thrills are still sold in Canada. If the Americans ever realize this, we may need to build The Wall. It's going to be a beautiful purple wall, the likes of which the world has never seen.

There is nothing like chewing a whole pack of Thrills at once. I've been known to chew 3 packs in one go. I find that above 3 packs breathing becomes difficult.

Even if you just chew a few pieces of Thrills at a time, it's pretty easy to go through whole pack in one sitting. It's a short-acting gum.

Yes, the Thrill wears off quickly. It's a slippery slope. I truly believe Thrills is a gateway gum.

Does it really taste like soap? hahaha!, chewing gum without sugar is very good for preventing cavities. But, chew soap? I do not know. You are crazy! hahaha!