Haven't written a stop motion post in a while, so I thought I'd cover the puppet making process for a project of mine called "The Legend of Dink." 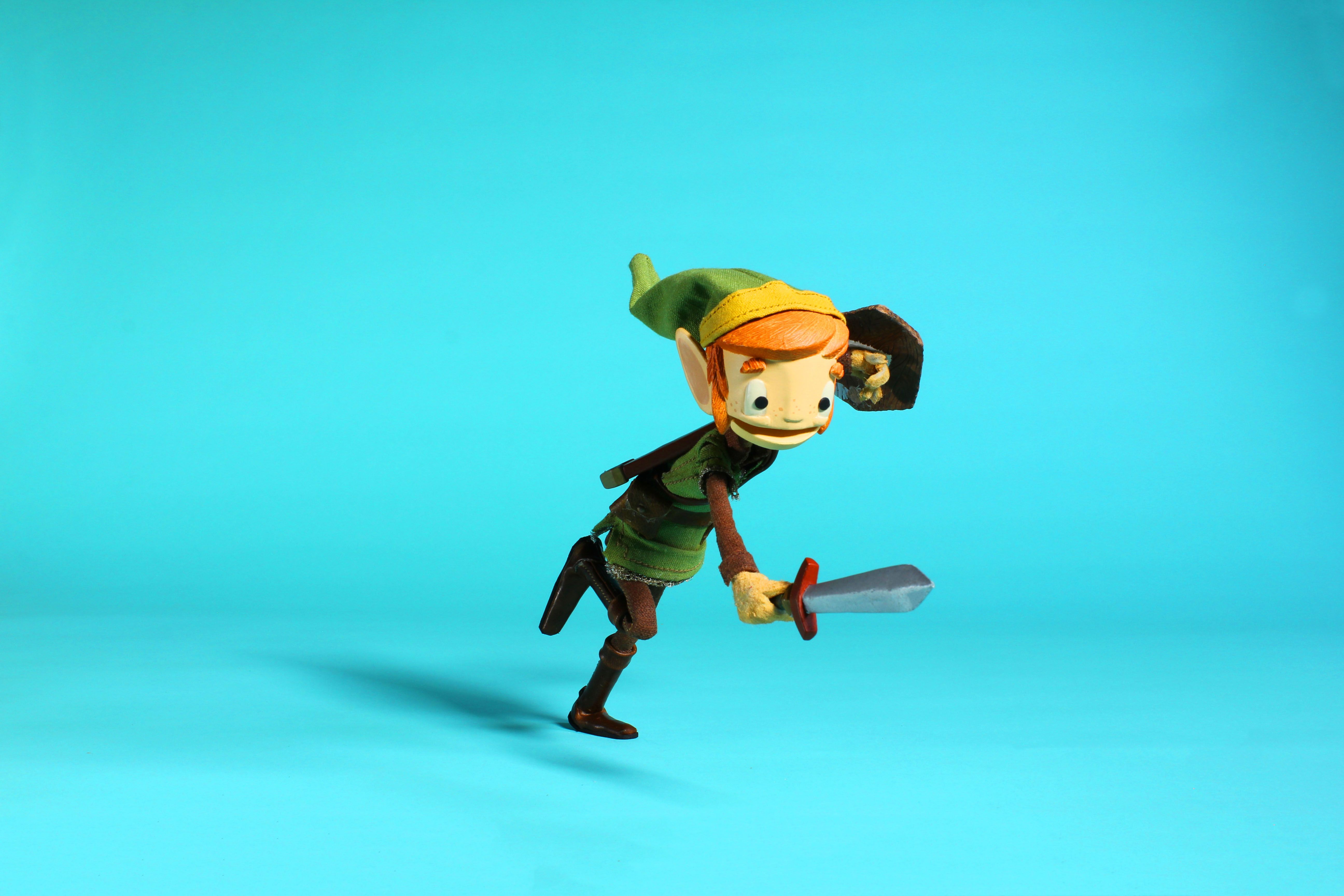 I built Dink at @extracredit while I was between jobs. This was my work space (lots of k&s tubing, aluminum wire, sculpting tools and clay). Here's a shot of Dink's first head sculpt (I ended up doing a second version). 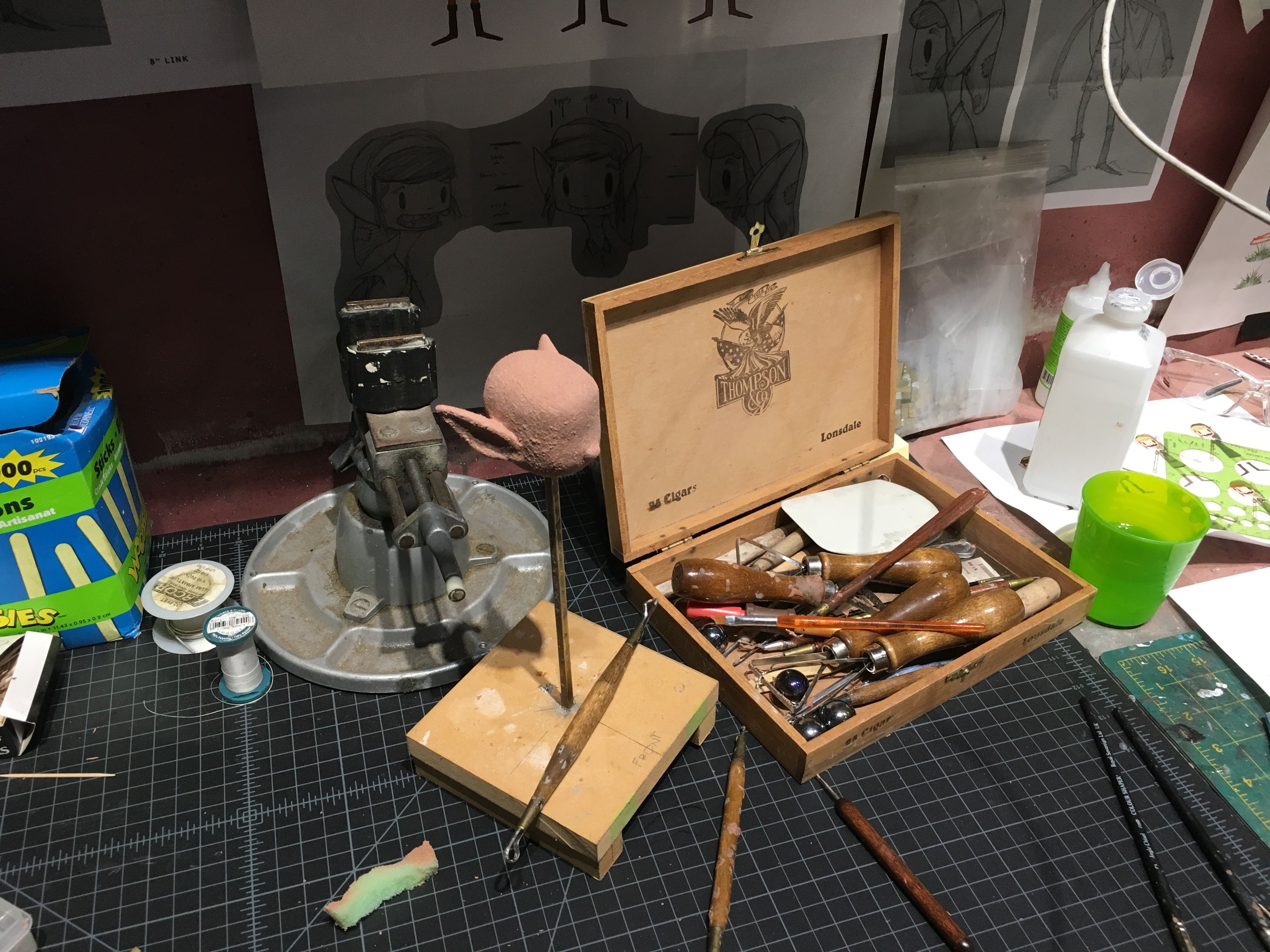 Dink's head being prepped to be molded. Two air vents, and a red dividing line for once the mold is poured. Dink's head in the box, ready for the silicone to be poured. 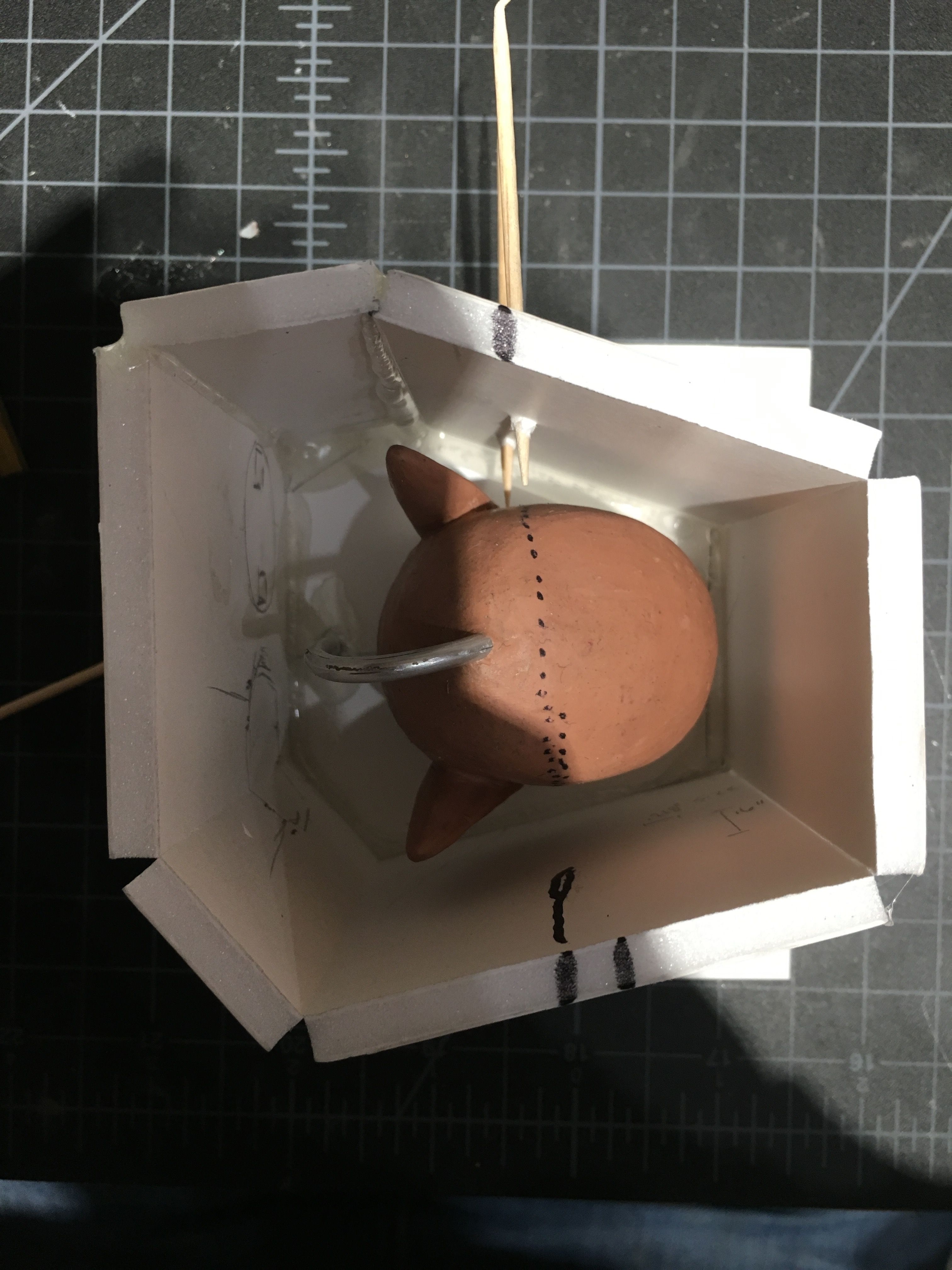 Top right corner of this image shows what the final mold looks like once the silicone has cured, and been removed from the box. 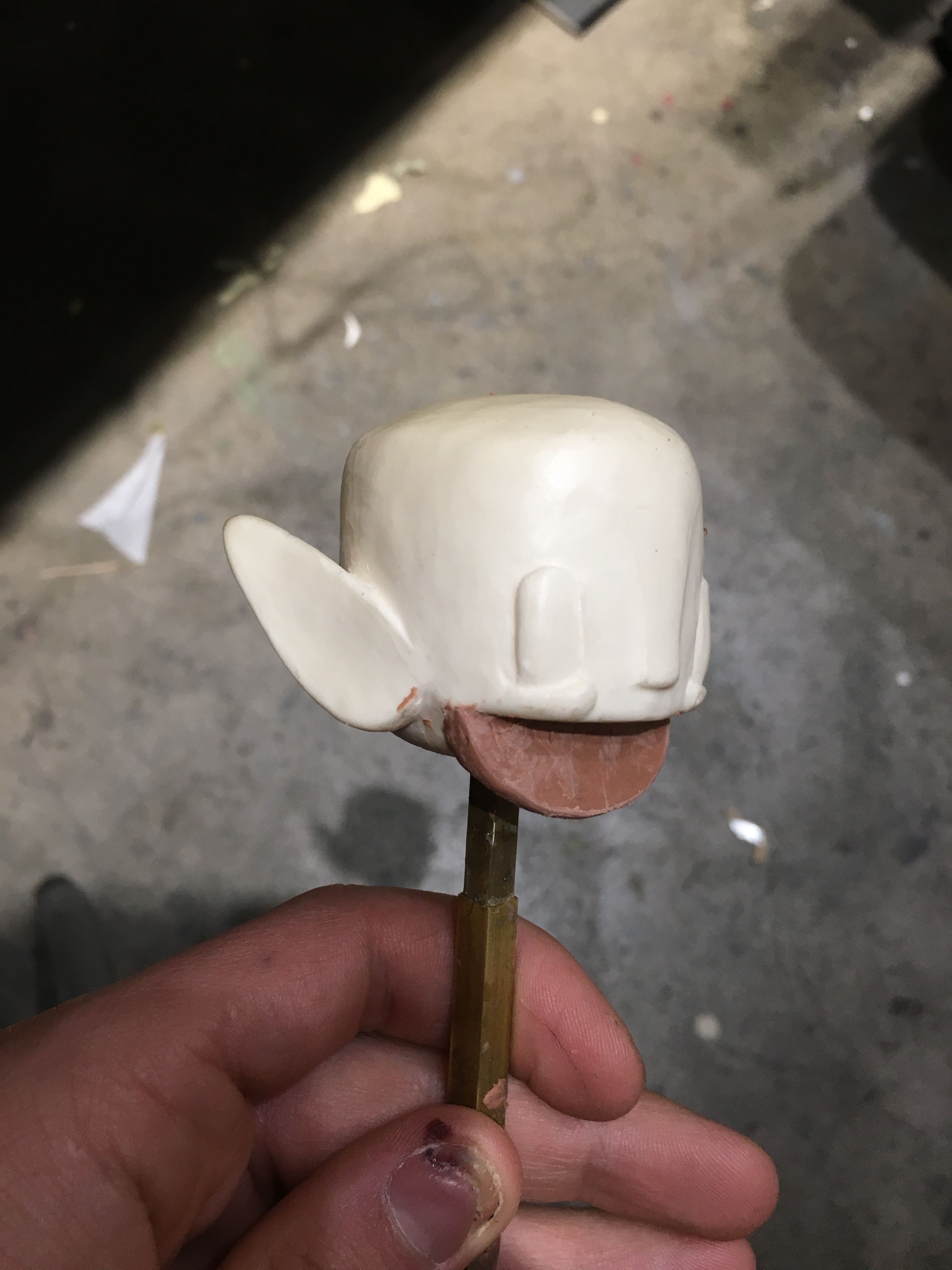 This is Drayson sculpting the mouths. We ended up using 5 different replacements for all the mouth shapes. Here's another mouth shape being sculpted onto the test head. 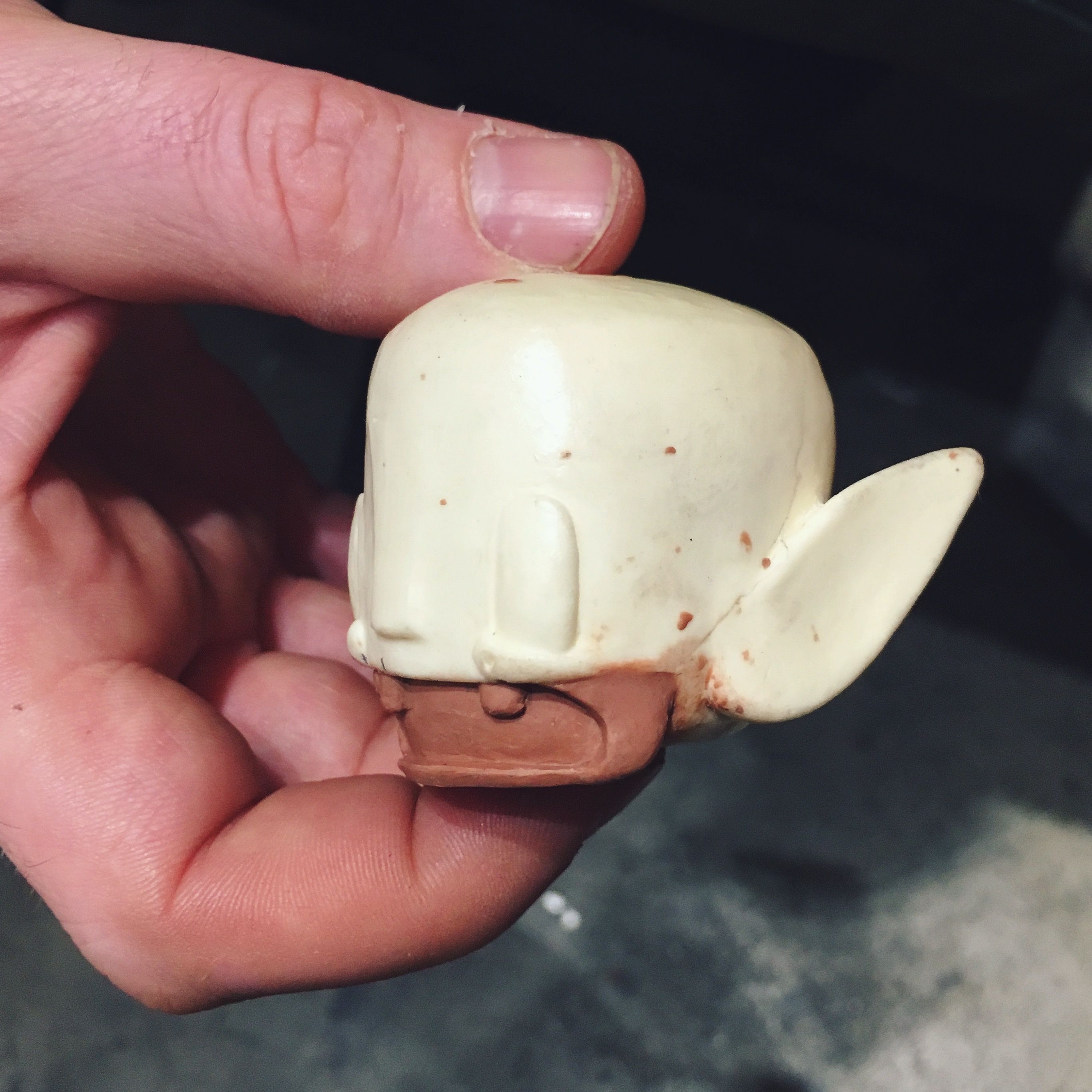 All the mouths getting ready to be moulded. Here's a shot of my spraybooth workstation. Anything that is chemical or toxic related gets done in a room with adequate ventilation. 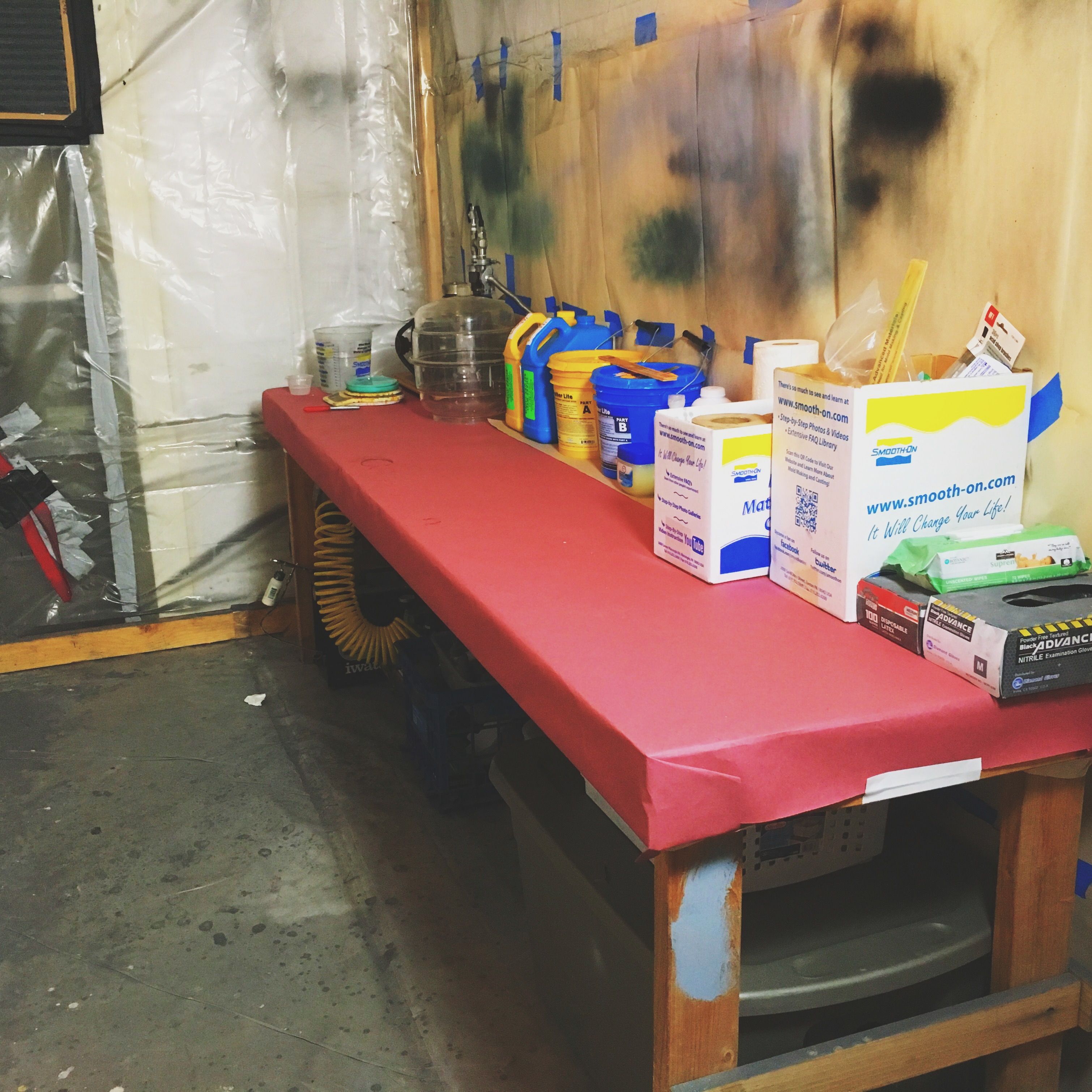 Here are all the final head pieces, primed and painted with their base coat. Final Head being painted! Everything is airbrushed, and then dry brushed with details. 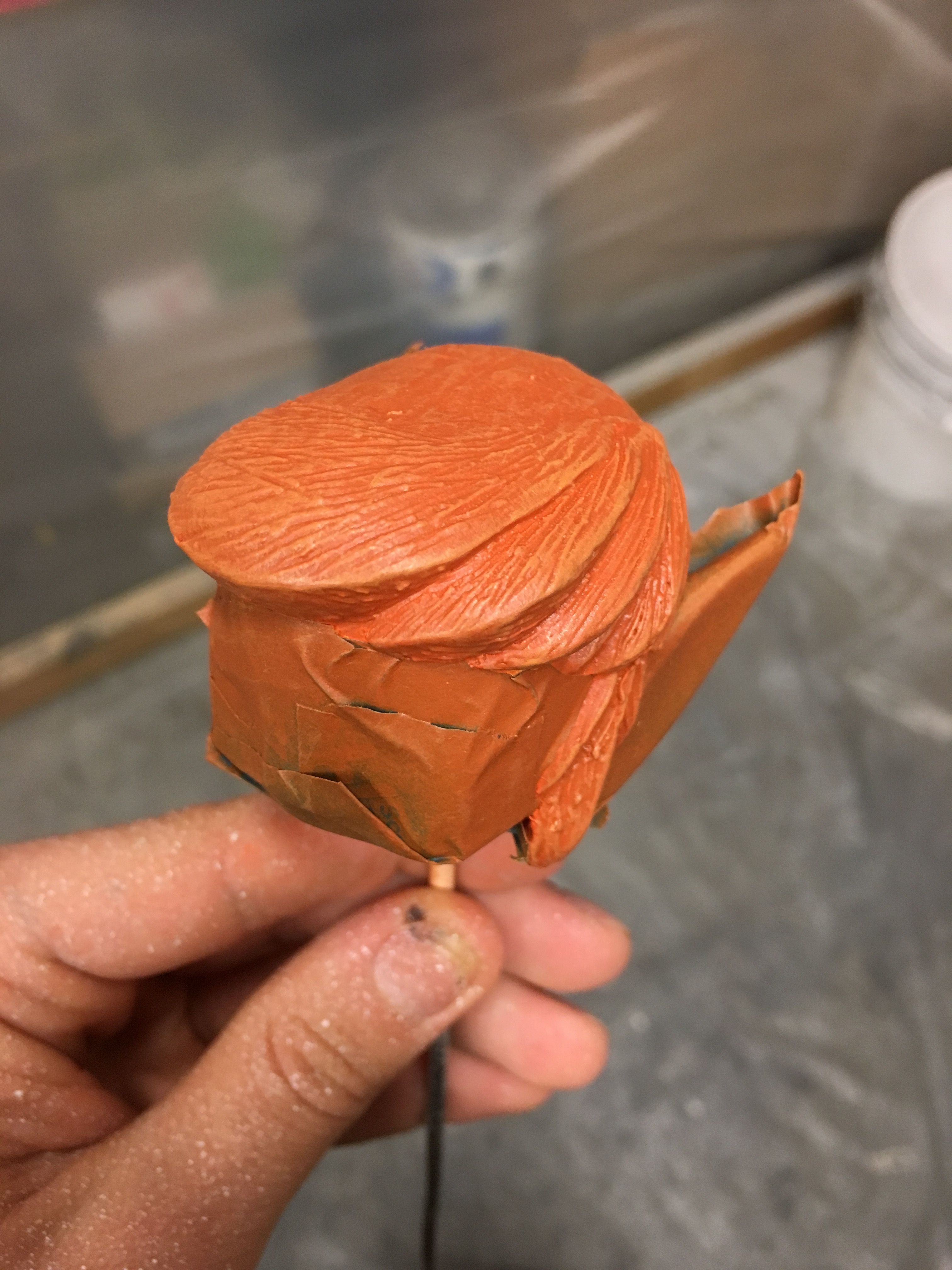 Here are all the clothing elements. All of these parts were sewn together, and then placed into the body blocks of the armature, which keep everything held together and are what make the character animatable. It's important to use fabrics that have a high thread count, so the scale looks appropriate relative to the size of the character. 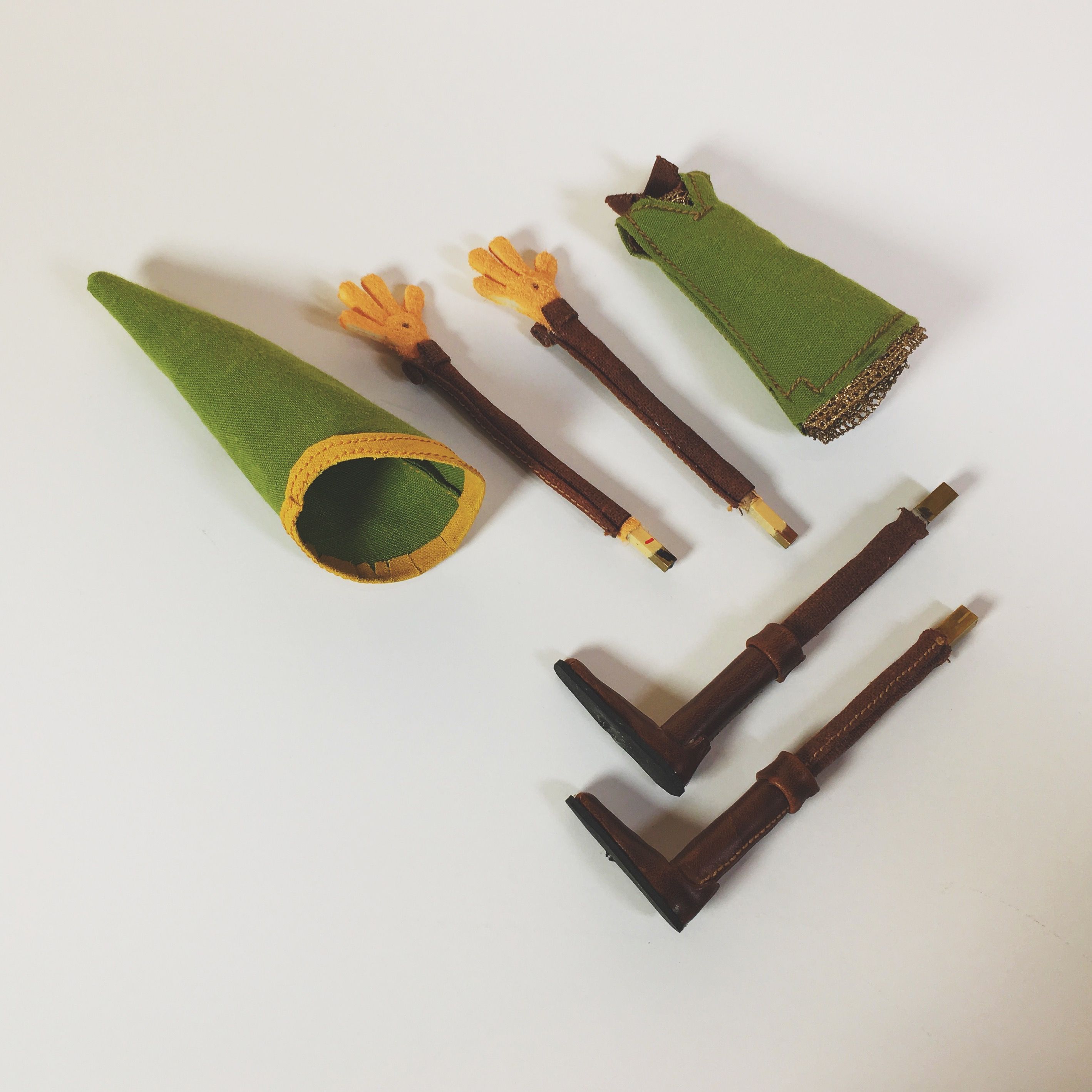 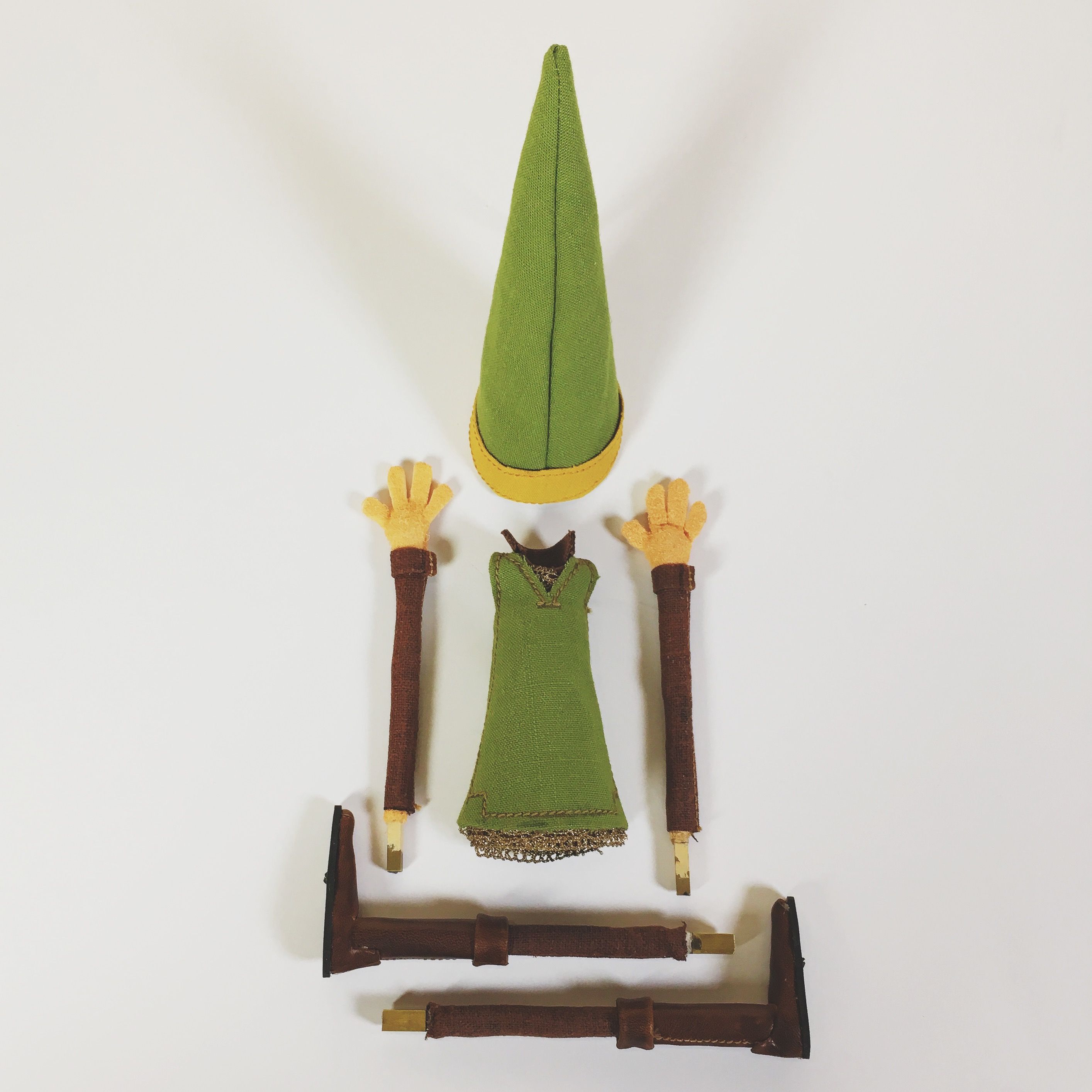 His accessories were made from real leather! Here is the full armature without any fabrication. All limbs are aluminum wire and all the body blocks are hard plastic with plugs fitted so that the limbs will slot in. 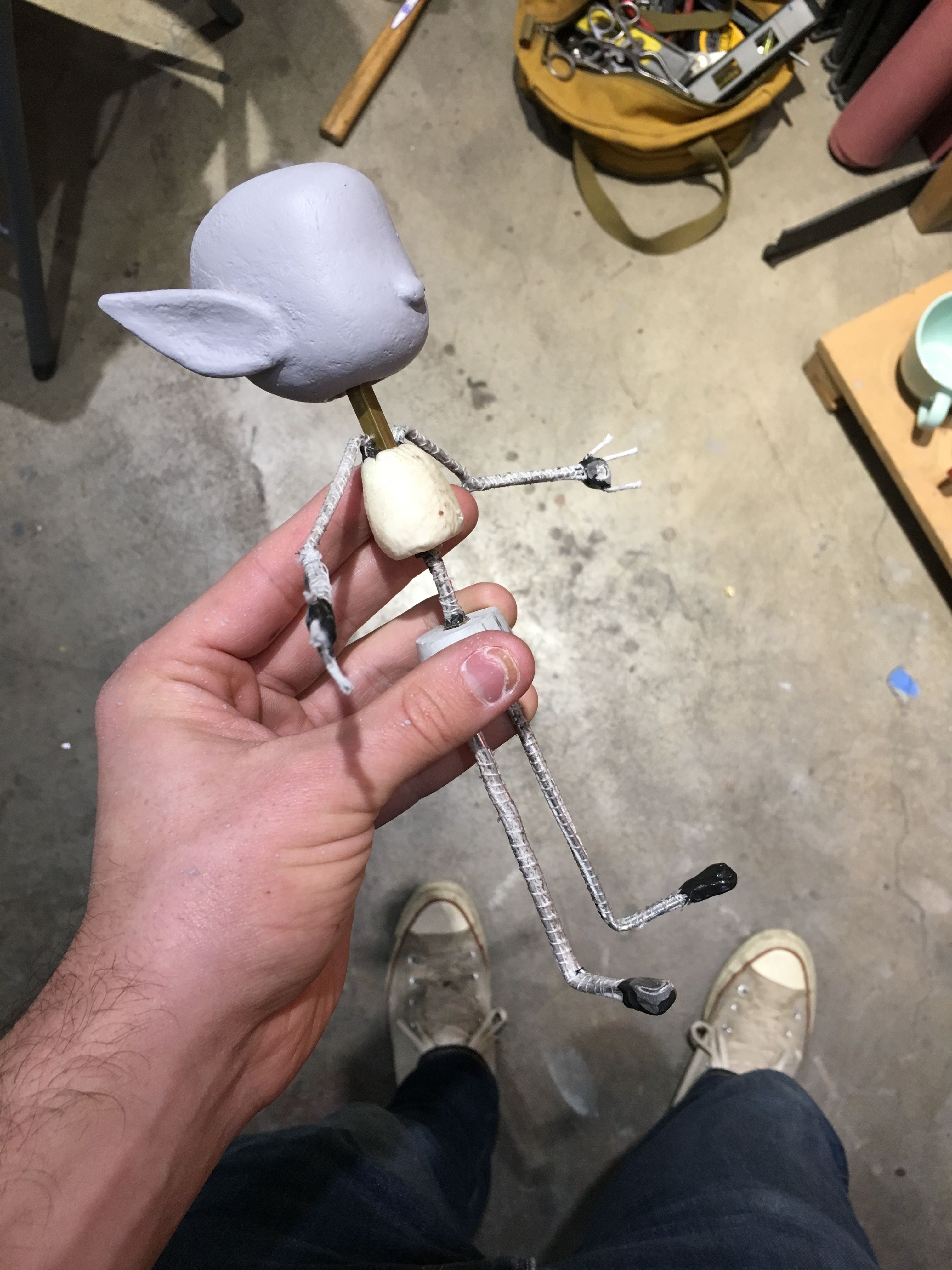 Once all the pieces were fitted together, we did a photoshoot to make sure all the elements photographed well in camera. 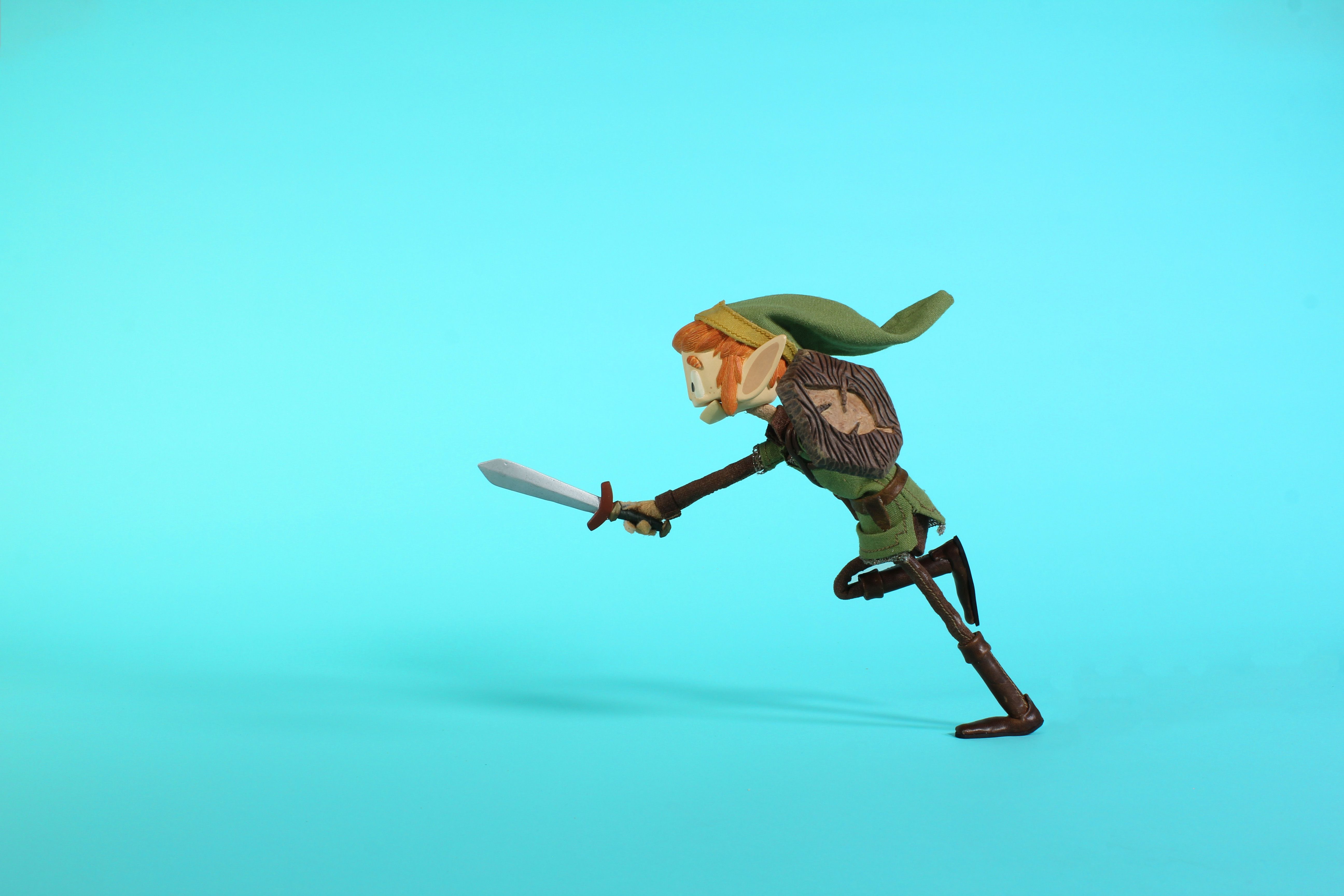 Next post on Dink will probably focus around the set! 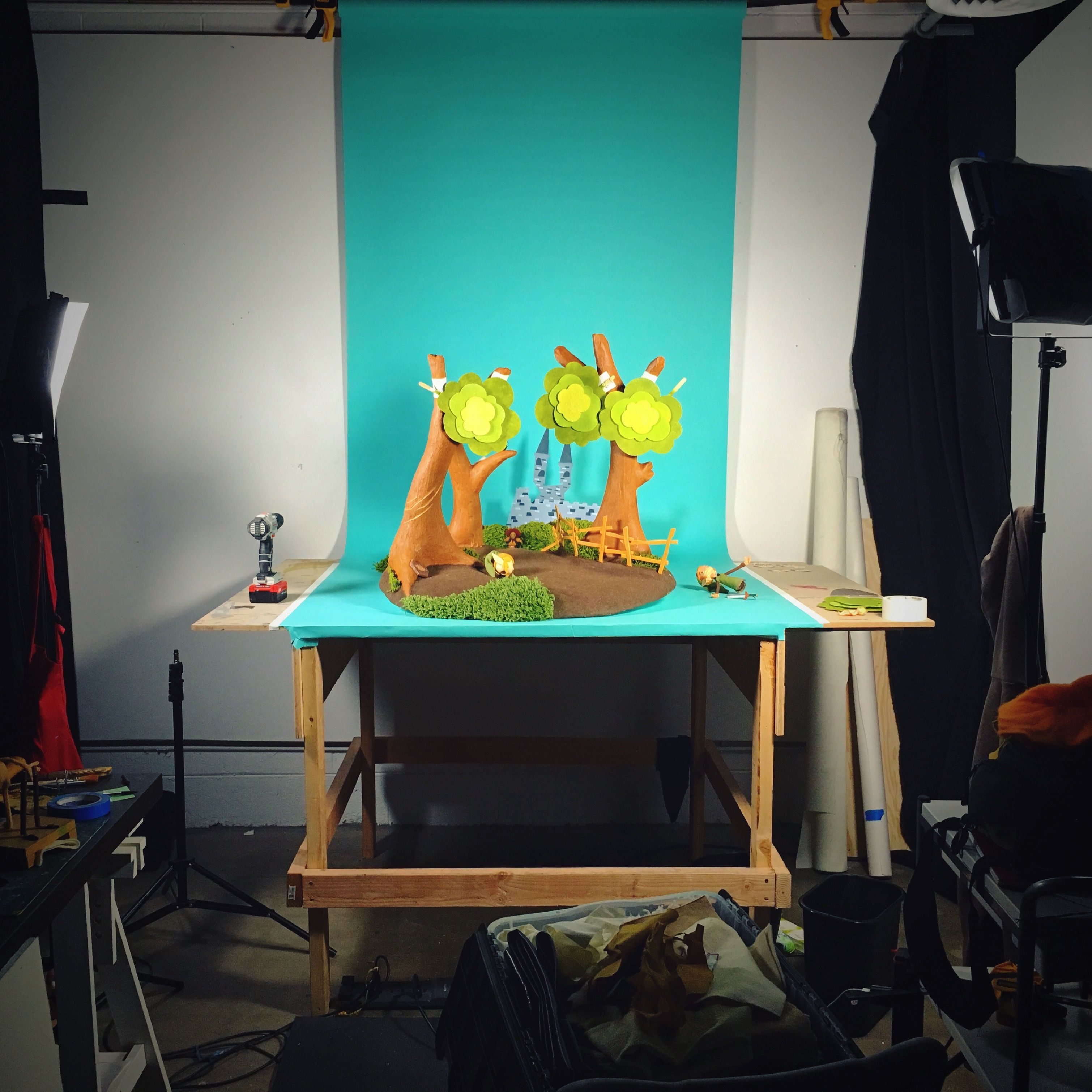 Thanks for following along, steemers! I appreciate it. Will keep everyone updated as this project gets closer to completion. :)

ocd-resteem animation art stopmotion steem
3년 전 by tysonjames58
$2.74
54 votes
댓글 남기기 24
Authors get paid when people like you upvote their post.If you enjoyed what you read here, create your account today and start earning FREE STEEM!
STEEMKR.COM IS SPONSORED BY

Did you make his clothes as well? Or does someone else do that?

My animation partner generally does the clothes. I wish I had that talent but I don’t!

Also, thank you so much for the support! You’re upvotes have been super helpful these past few months. I really appreciate it!

Stop-motion will never cease to amaze me. The amount of work and time put in the craft it´s just plain amazing. This one in particular looks very funny! Please keep us posted!

Thank you so much! I’ll definitely keep ya updated on the progress.

What a talent! I really like this post @tysonjames specially because Zelda was my favorite Nintendo game!

Thanks man, I really appreciate it!

This looks like so much fun! So cool. Upvoted :)

This is amazing work! I can't wait to see this.

A great miniature stuff. The clothes are lit. You are totally a talented one. Keep on posting a great post like this. 👏

wow man. I've never actually seen what it takes to do a stop motion. I'm so blown away by all the little pieces . This just blew my mind a little. I'll be following you for sure!

This is outstanding! The amount of work you put into this! wow! You are beyond talented!

I have a good friend that that is doing her short stop motion movies. I helped her with the soundtrack of one. And another friend of mine is a crafter in Laika, so I know how much work is behind this, it's amazing. I love it. I love to design monsters and I wish I had the skills for this. Inspiring, thanks for sharing.

That is so cool. Reminds me of a version of Link ;)

I love your Dink! Lol big fan of Zelda and he's just as charming as Link. I enjoyed looking at all that went into making this guy! Definitely resteemed :)

Gosh! I need your skill. I love seeing the breakdown of Dink. I’ve been thinking about attempting a full figure sculpture soon. It might be because I want to make clothes for a little person. :D

$0.00
댓글 남기기
[-]
crisangel65  ·  3년 전
I am very impressed by what you have done. With that he reminded me to link, in the legend of zelda, those days when I was playing "La Leyende de Zelda: Ocarina of Time", also "The Legend of Zelda: Majora Mask". Thank you for remembering those old times, in addition to sharing that beautiful art you are dedicated to. A greeting.
$0.00
댓글 남기기
[-]
otage70  ·  3년 전

Really great post a lot of cool information here. I never thought about using high thread count but I guess it would look like burlap on a tiny character if you didn't. All the various mouth shapes are interesting too. Do you have different shapes for different syllables or is it just about emotional levels and they all can do speaking? Thanks for another peek behind the scenes.