Phở or pho Vietnamese is a Vietnamese soup consisting of broth, rice noodles called bánh phở, a few herbs, and meat, primarily made with either beef (phở bò) or chicken (phở gà). Pho is a popular street food in Vietnam and the specialty of a number of restaurant chains around the world. Pho originated in the early 20th century in northern Vietnam, and was popularized throughout the rest of the world by refugees after the Vietnam War. Because pho's origins are poorly documented, there is significant disagreement over the cultural influences that led to its development in Vietnam, as well as the etymology of the word itself. The Hanoi and Saigon styles of pho differ by noodle width, sweetness of broth, and choice of herbs. A related noodle soup, bún bò Huế, which is a spicy beef noodle soup, is associated with Huế in central Vietnam.
Pho originated in the early 20th century in northern Vietnam, southeast of Hanoi in Nam Định Province, then a substantial textile market. The traditional home of pho is reputed to be the villages of Vân Cù and Dao Cù (or Giao Cù) in Đông Xuân commune, Nam Trực District, Nam Định Province. According to villagers, pho was eaten in Vân Cù long before the French colonial period when it was popularized.

Although dishes similar to pho probably existed in Nam Định prior, cultural historian and researcher Trịnh Quang Dũng believes that the popularization and origins of the modern pho stemmed from the intersection of several historical and cultural factors in the early 20th century. These include the higher availability of beef due to French demand, which in turn produced beef bones that were purchased by Chinese workers to make into a dish similar to pho called ngưu nhục phấn. The demand for this dish was initially the greatest with workers sourced from the provinces of Yunnan and Guangdong, who found affinity to the dish due to its similarities to that of their homeland, which eventually popularized and familiarized this dish with the general population.

Pho was originally sold at dawn and dusk by roaming street vendors, who shouldered mobile kitchens on carrying poles (gánh phở). From the pole hung two wooden cabinets, one housing a cauldron over a wood fire, the other storing noodles, spices, cookware, and space to prepare a bowl of pho. The heavy gánh was always shouldered by men.They kept their heads warm with distinctive, disheveled felt hats called mũ phở.

Hanoi's first two fixed pho stands were a Vietnamese-owned Cát Tường on Cầu Gỗ Street and a Chinese-owned stand in front of Bờ Hồ tram stop. They were joined in 1918 by two more on Quạt Row and Đồng Row. Around 1925, a Vân Cù villager named Vạn opened the first "Nam Định style" pho stand in Hanoi. Gánh phở declined in number around 1936–1946 in favor of stationary eateries. 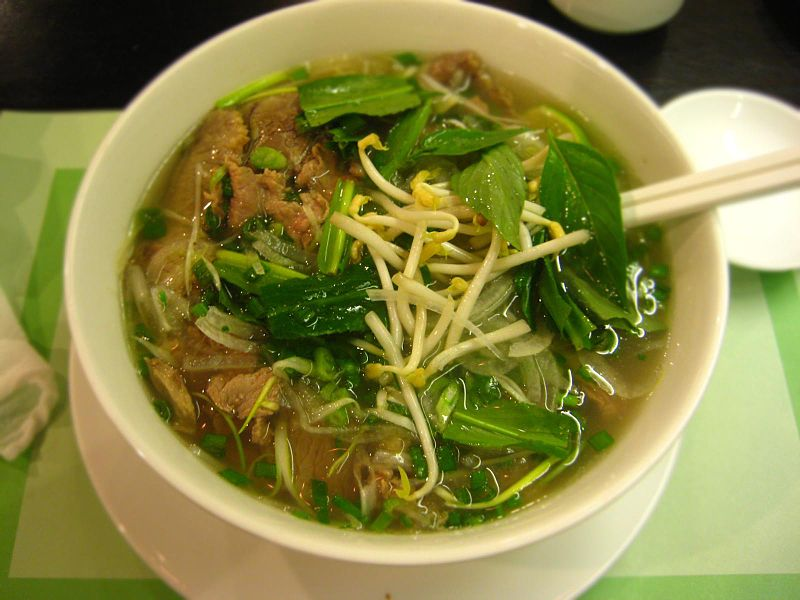 p
4년 전 by thanhphuong9625
$0.00
10 votes
댓글 남기기 0
Authors get paid when people like you upvote their post.If you enjoyed what you read here, create your account today and start earning FREE STEEM!
STEEMKR.COM IS SPONSORED BY