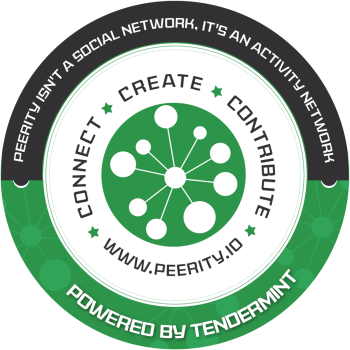 Listen to Peerity on Beyond Bitcoin Hangout from this morning, raw recording provided by: @africa

Check out peerity blog to view articles such as:

Earlier this month, Peerity was given the opportunity to present the project at the Blockchain +IOT Expo in Berlin. Though the internet connection was next to non-existing, which was quite a surprise for a tech event, Peerity’s first public appearance was an amazing experience.

Peerity is a social connection and activity platform. We connect individuals, communities, and organizations together. Want to start a band, write a novel, volunteer? Peerity is here to make connection and collaboration effortless.

Our goal is to provide the tools and space for communities to thrive online. Think of us as Meetup meets Reddit meets Patreon meets Bitcoin.

Communities can use Peerity to find and recruit members who are interested in their causes. A Peerity community can raise funds, launch projects, advertise services, and more.

Create your profile and get effortlessly connected to people, communities, and organizations with similar interests and goals that are local to you. Plus, you will automatically get Peerity tokens based on activity that you can redeem for site features or exchange for cash.

Established organizations can use Peerity to connect with those interested in their brand, products, or goals.

If you are new to Peerity.io you can read our whitepaper here or listen to Jan Schets’ presentation below. It gives a quick look at the project that we have been putting together for the past few months.

LIFE HAPPENS AWAY FROM THE COMPUTER. DON’T LET TECHNOLOGY TAKE OVER YOUR LIFE, HAVE TECHNOLOGY AMPLIFY IT. PEERITY REWARDS LIVE HUMAN ACTIVITIES.

I have always wondered, “What if there was a blockchain that could help active communities such as living arts and civil services?”
Put simply: Peerity is an Activity Network built with Tendermint that rewards positive actions via online content, commerce, and most importantly live human gatherings. Exciting times.

Peerity is a blockchain based social activity network that rewards on and offline human interaction. Visit our New Site to read the latest version of the Peerity Whitepaper

Watch for updates of the token sale. @virtualgrowth will be offering/giving away free crowdsale tokens on bitshares when available.

“The overall goal of the online token reward system is to reward helpful, high-value content while diminishing spam and hostile behavior. Users who post helpful, courteous, friendly content will be rewarded.”

As with many blockchains there will be those with a greater stake in the success and direction of the platform. These nodes will be responsible for validating blocks on the Peerity chain. They will be incentivized with something like 35% of the daily created tokens.

peerity community beyondbitcoin whaleshares bounty
3년 전 by virtualgrowth72
$27.27
91 votes
댓글 남기기 9
Authors get paid when people like you upvote their post.If you enjoyed what you read here, create your account today and start earning FREE STEEM!
STEEMKR.COM IS SPONSORED BY

Sounds like a very interesting project. I've never heard of an activity network, and I can see how it could be useful. Will be watching it.

Interesting article, thanks for sharing

Welcome, thanks for reading.

I'm very excited about peerity, and I'm looking to get involved and invest as soon as possible.Looking forward to the tokensale, and I'm hoping that it will be listed on tradeqwik.
Upvoted and resteemed.

I'll take a look at the white paper if I have a chance. Take care VG!

I think that I want in.

This post has received a 3.49 % upvote from @booster thanks to: @virtualgrowth.