Have You Heard This? (the trail is still a mystery)

How did your mind, ever come to these questions in your mind? And looking for answers from where we come from? Could we be alone in the universe? Perhaps this is a question that never ceased to be raised. That it is these questions and mysteries that bring people to dream of finding other friends who may be in this universe. Or at least trace the history of human life on Earth.

It may also be the question that brings humanity to trace the past of the Solar System. The goal is one: trace where life on Earth comes from. And from which water becomes the key to life on Earth can be present. How can our Earth have so much water composition that it is able to sustain life?

It could be the first answer, the Earth can have water in the liquid form because it is in the sun's lonely zone. But where does that water come from? Various theories have been put forward, and one of them is water on Earth is believed to be carried by comets in the ancient times.

Life on Earth began at the end of a massive collision period, some 4.5 billion years ago. Before the period of the collision occurred, the Earth has been invaded by interplanetary debris that became the material for the formation of the planet embryo of this human house. As a result of the onslaught of inter-planetary debris, proto-Earth becomes so hot that it is impossible for life to be formed in it. Here, asteroids and comets play an important role.

Large collisions of asteroids and comets change the course of Earth's history from extremely hot planets to lonely planets. The comet invasion of the early Earth's formation became the key to the presence of water on Earth. Yup! Water and organic molecules that form the basis for growth and development of life on Earth are delivered through the invasion of comets in those days. 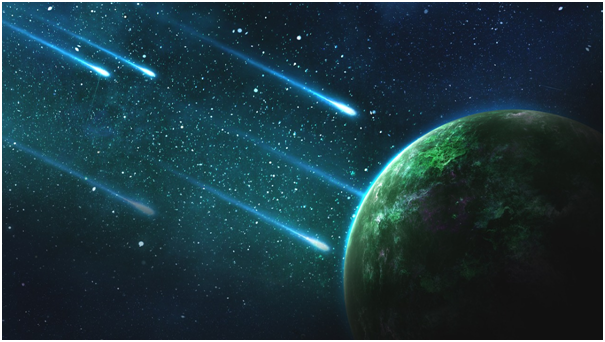 During the massive collision periods of asteroids and comets, the oceans on Earth evaporate and the carbon-based molecules that form the basis of life on Earth were so fragile that they could not survive. After that, the early life that might have formed on Earth was destroyed. But at the end of a massive collision period, life appeared! The proof is the oldest fossil found on Earth is 3.5 billion years old. The microbial fossils found in Australia are believed to be evidence of the early existence of life on Earth that later evolved and evolved.

But how could the fragile early life of the Earth end when a massive collision took place, and there was a new life emerging at the end of a massive collision period? That is, in a very short period of life can grow, develop and survive on Earth. Life then evolved into a complex life on Earth.

Before the big collision period, the Earth has only a small amount of water and carbon-based molecules on its surface. Well, how is it possible for a short time there could be a new life? The answer lies in the big collision itself.

Comets that are repeatedly hitting the Earth are what deliver water and organic molecules to form life. That is, comets are composed of ice water, dust and organic molecules that are abundant from the rest of the formation of the Solar System 4.6 billion years ago. And they have preserved eternally on the outer edge of the Solar System away from the Sun so that its condition is frozen enough to survive as it is.

So, when a large collision of comets and asteroids destroyed the first life on Earth, then in a short time another life emerged. And it is believed the comet collision 65 million years ago also wiped out more than 75% of life on Earth including dinosaurs. The collision leaves a life that can survive and evolve into what it is today. In the end, the comet seems to have an interesting dualism. Destroys life but then builds a new life and ultimately only those who can survive.

Comets do present water and life molecules on Earth. But the existence of Earth also helps the survival of the evolution of life. Earth's location in the habitable zone The warm sun becomes another reason life can continue to survive and thrive. Without it, life will die to leave Earth as an uninhabited empty planet. If the Earth is too hot, its fate may not be much different from Venus, or it may be like Mars on the outside edge of the Sun's habitable zone. Gersnag and dusty.

To be able to know the initial composition of the formation of planets, astronomers learned the composition of comets. Hopefully, astronomers can trace the past of the Earth and also the planets in the Solar System as well as know how life begins. With this information, astronomers will look for another Earth in extrasolar systems that already present thousands of planets to explore and there are at least about 21 planets believed to have life potential. Will the life on these planets have the possibility to grow and flourish and will that life come from a comet collision in each of those planets? That's the question that still needs to be explored. 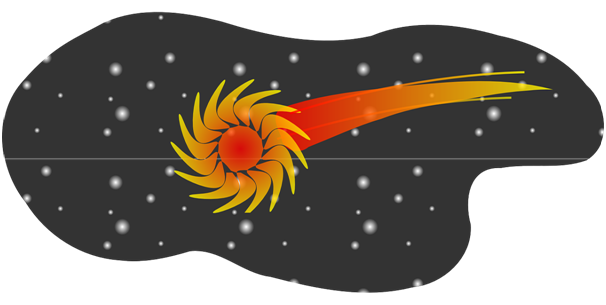 Comets, small objects that lie deep on the outer edges of the Solar System are even considered to be a sign of the coming disaster for humans on Earth. But, a small object whose contents only ice and dust is storing the spices and materials that form the Solar System. Comets are timeless historical witnesses of time. Despite its shape, its color does not seem attractive, even difficult to observe, but this small object is the key story about the formation of planets in the Solar System and also in other stars. thanks!

philosophy esteem astronomy science life
4년 전 by irza53
$0.56
18 votes
댓글 남기기 0
Authors get paid when people like you upvote their post.If you enjoyed what you read here, create your account today and start earning FREE STEEM!
STEEMKR.COM IS SPONSORED BY