Hello Lovely Steemians, here are some of my favorite winning photographers and images for 2018, with German photographer Tobias Friedrich being named Underwater Photographer of the Year 2018.

More than 5,000 images were submitted this year by photographers from around the globe. Prizes and commendations were handed out in a number of categories including Wide Angle, Macro, Wrecks, Behavior, Portrait, Black & White, Compact, Up & Coming, and, in British waters, Wide Angle, Compact, and Macro shots.

Here are some of the photos with captions written by the photographers and hope you enjoy them: "We found a pod of Orcas that were circling some herring caught in a net. The animals keep circling the net and we could approach them easily to take some close-up shots." Photographed near Skjervoya, Norway 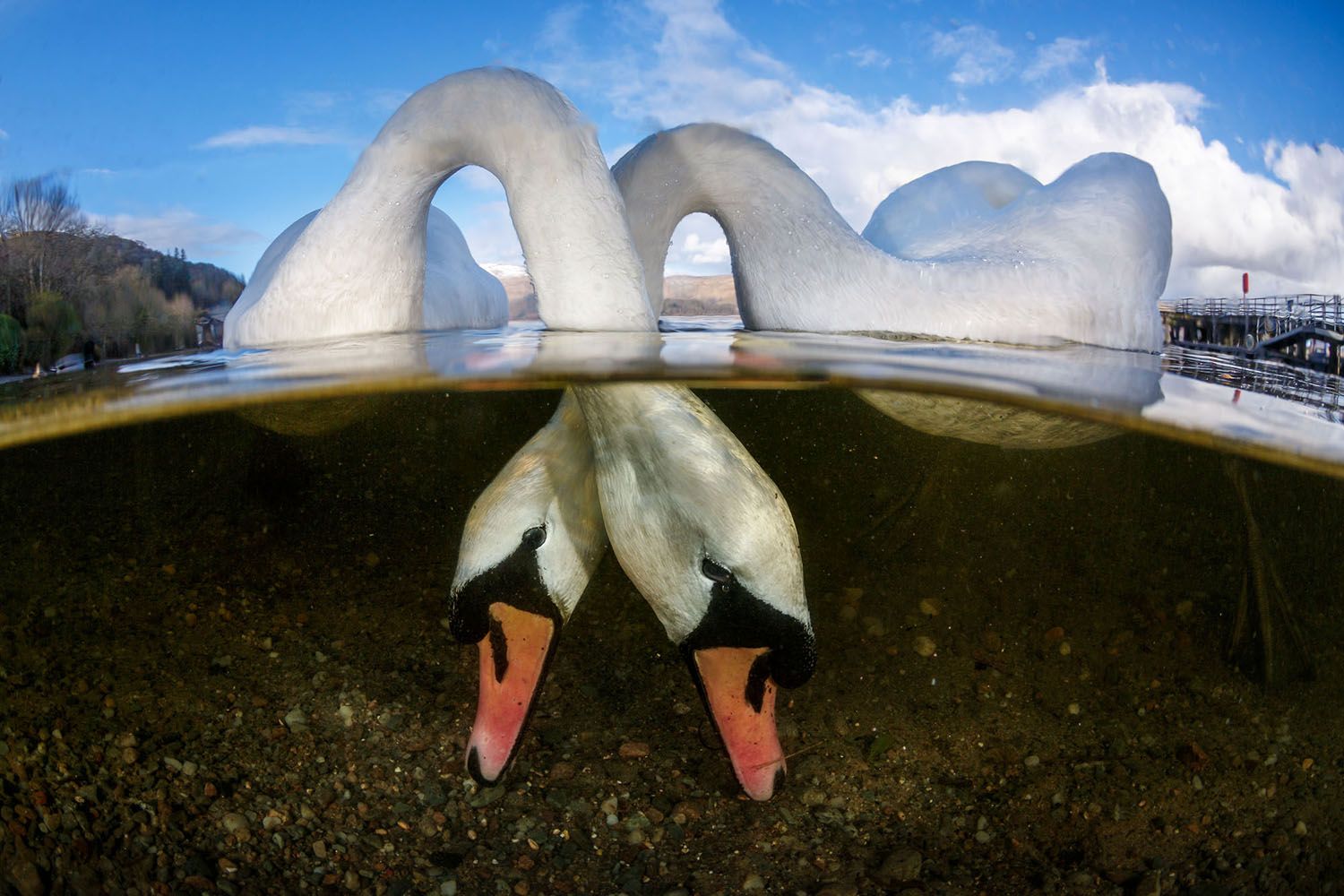 "I have always been fascinated by over-under photography, connecting the everyday terrestrial world that we all know with the less familiar underwater secrets. I chose Loch Lomond as the location for this shot due to its idyllic scenery, water access, and friendly swans. My initial idea was to frame a split shot of one swan feeding below the surface of the water but when I noticed how comfortable they were around me I was confident, with some patience, I could get that magical shot of the two. It was mid-day, sun high in the sky, when I waded slowly into the shallow water, allowing the swans to become comfortable with my presence. When they began searching for food below the water line I just had to wait for that perfect moment of synchronicity." Photographed at Luss Pier, Loch Lomond, Scotland. "During springtime, from April to June, on the coast of Baja, California, we can witness one of the most impressive migrations of the sea. Thousands of mobula rays migrate along this coast. I tried many times to find this incredible behavior but never was able. This year, during a morning safari on the sea, we saw a different group of beautiful mobula rays. I jumped in the water and we followed them for a couple of hours and a small group moved into a shallow area where I was able to shoot in great light." Photographed off Cabo San Lucas, Mexico. 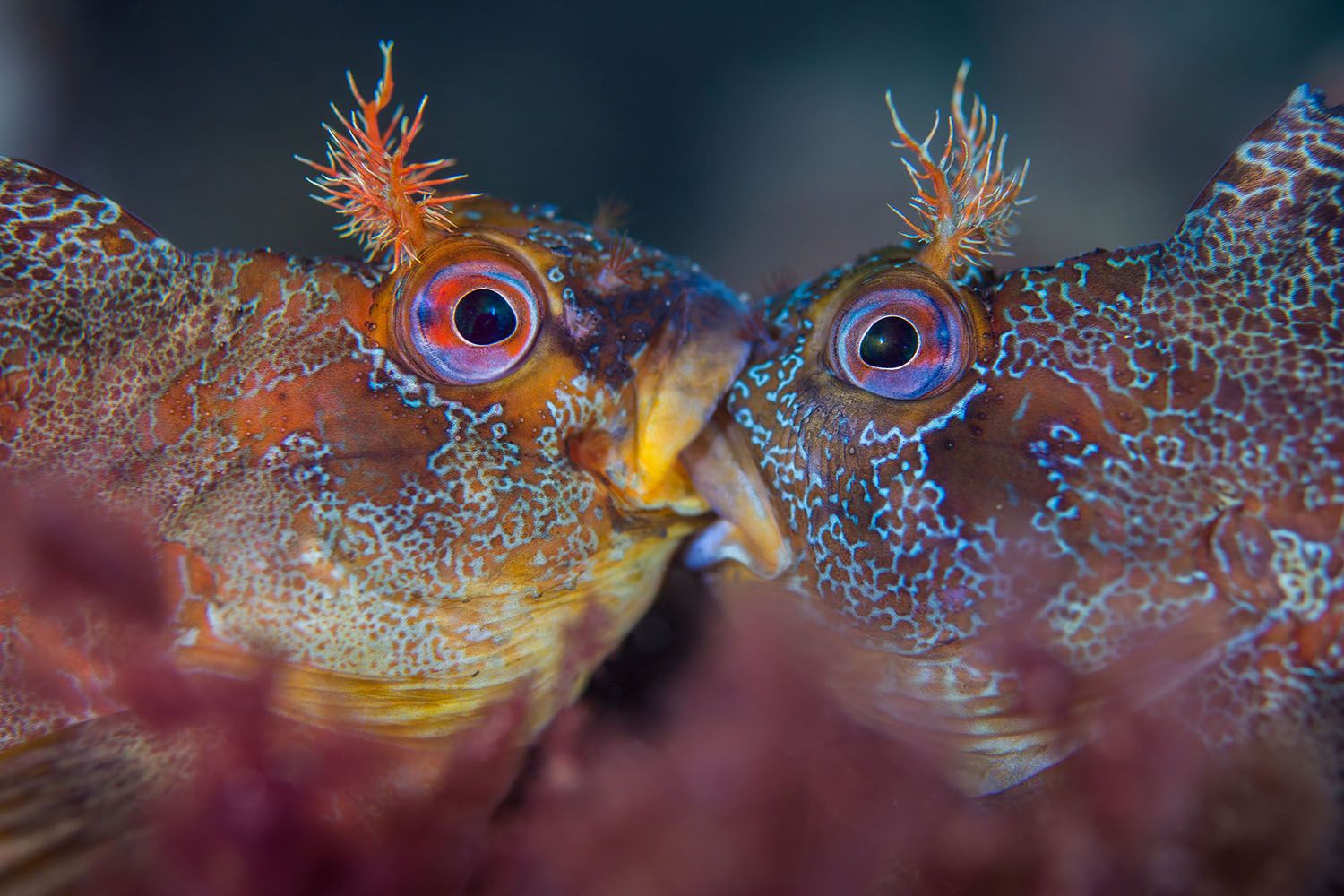 "Despite appearances, these two tompot blennies are not kissing but engaged in a ferocious battle over mating rights. The British summer is mating season among tompots and competition is fierce. I went diving under Swanage Pier in search of these charismatic fish and was delighted to encounter one with the ornate, blue facial markings designed to attract a partner. To my surprise and wonder, he was soon joined by another male and they started tussling. At one point, the dust settled and they remained motionless, jaws locked together just long enough for me to capture this image. It was a very fortunate encounter and I am delighted to be able to share it through this photo." Photographed at Swanage Pier, Swanage, Dorset, UK. "I have dived this wreck several times and I never get tired of it! This is a well-known subject, a British World War II BSA M20 motorbike inside Hold 2 (port side, upper level) of the wreck of the SS Thistlegorm. Usually, I use strobes for this kind of shoot but I had to try this with two video lights, I think the result works well and the lights are useful, especially when you, as the photographer, can see how the light is shaping and working." Photographed in the Red Sea, off the coast of Egypt. 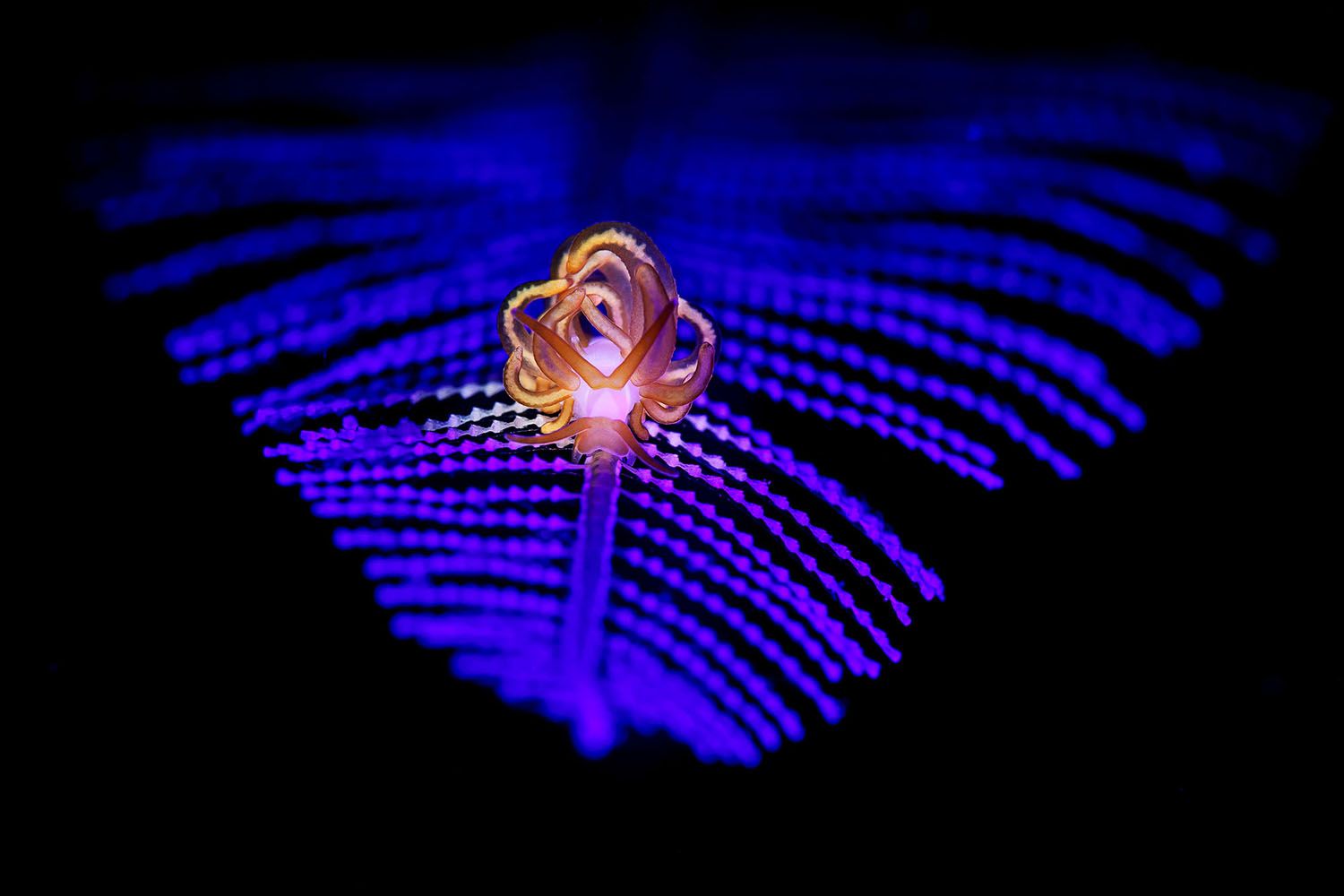 It is not easy to combine blue light in a traditionally lit image. You need to make the subject pop while integrating the blue light into the photo naturally." Photographed near Lembeh, Indonesia. "I was very intrigued by this mammal who adapted to marine life and had in mind to witness of this scene. So I asked to my Scottish friend Richard Shucksmith who knows this species very well to help me to capture this image. During a dive we were very lucky to find this otter who was curious about my lens." Photographed near Shetland, Scotland. 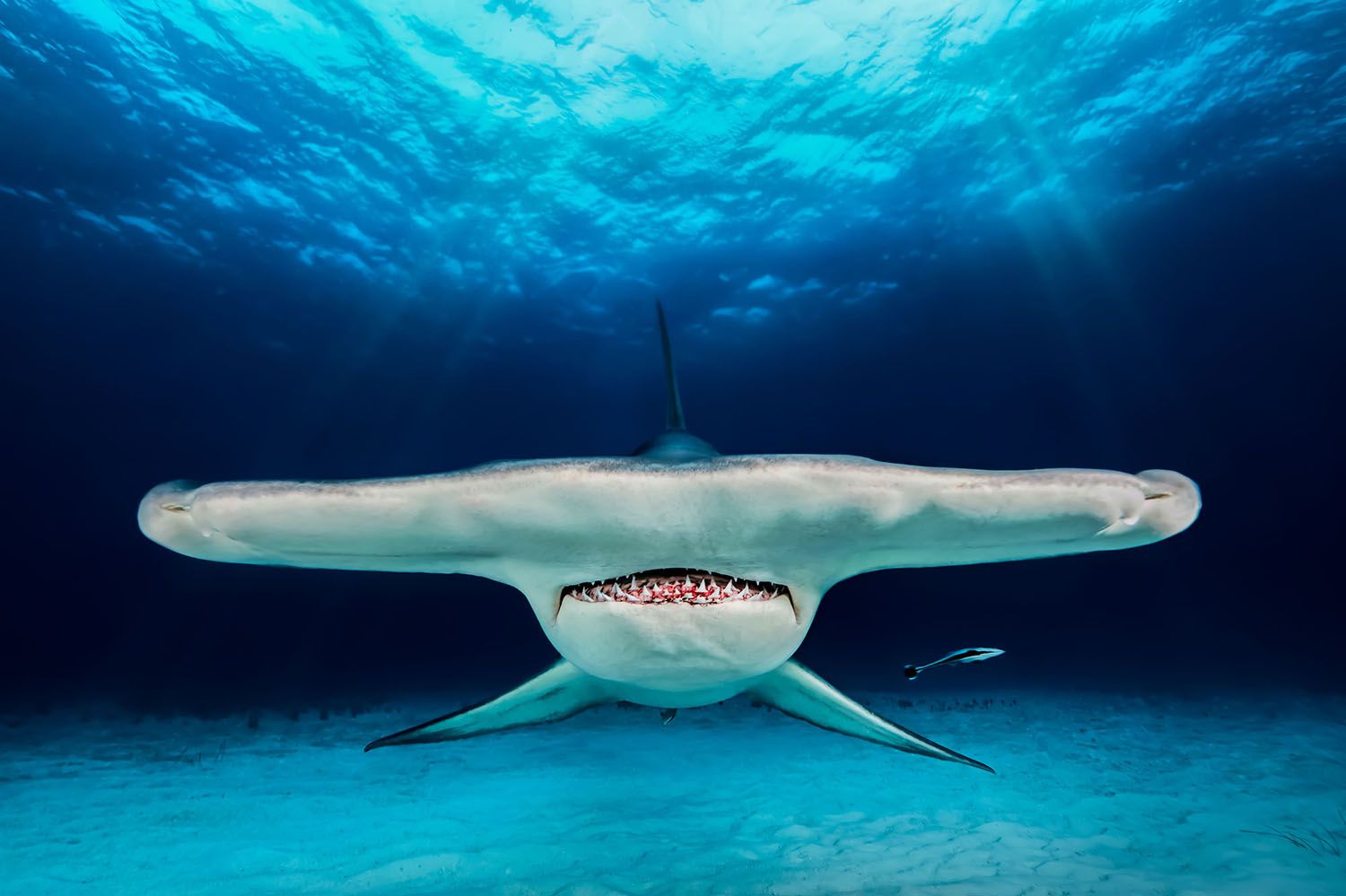 "It was the last day of the Enigma team shark expedition to Bahamas. The last day and I was still missing a shot I came here to take. We went down. The day before there was a storm and we did not see anything. But they were back. Glorious, mighty, curious, but shy four-meter-long ladies. The great hammerheads were slowly circulating around us. It was my last chance. The last opportunity to do what I had in my mind for months. 'Stay calm; be patient,' was constantly echoing in my mind. Sitting on a soft sandy bottom, facing against the sun I could have only waited. And there she was coming directly at me." Photographed near Bimini, Bahamas. "When I originally booked my surf trip to Fiji, I didn't realize how close Tonga was. I had always wanted to go to swim with the whales so I made a last minute adjustment to my flight and jumped over. Everyone I talked to strongly advised against going to Tonga without a guide lined up, but I figured a bad day swimming with whales was better than going back home. As luck would have it I found a group that was leaving early. I was able to take their spot on a boat with just one other diver and it was just us hanging with this mom and her calf. The calf was a wild one, breaching and tail slapping all over the place. I love this photo because it looks like mom is giving the baby a talking to about straying too far from her." Photographed off the North Shore of the Kingdom of Tonga.

I really hope you enjoyed those photographs, and let me know which one is your favorite in the comment section.

photography travel photochallenge photo sea
3년 전 by digdaga60
$71.80
58 votes
댓글 남기기 50
Authors get paid when people like you upvote their post.If you enjoyed what you read here, create your account today and start earning FREE STEEM!
STEEMKR.COM IS SPONSORED BY

Wonderful photographs i really amazed with your photography skills!

Not my photography, all photographers names are mentioned under each photo.

many thanks @samer484 for your support.

I'm loving the hammerhead. That's what I look like before my morning coffee. ;)

they are se beautiful that it can not be real. I loved especially first two photo but they are all stunning. tombots also seems fall in love but its surprising that they are in fight. Finally impressive post again. thanks friend.

They are real and beautiful, our world is very beautiful and thanks to all the explorers and photographers out there that take some impossible and daring photos.

Absolutely the most impressive migrations of the sea. Thousands of mobula rays migrate along this coast. This is truly amazing! Thank You for sharing!

Thank you for this comment and your support, they are indeed beautiful.

Thank You for taking time to reply to my comments. I look forward to your future Steemit posts. Have a great day!

photography is very good my friend

This post has received a 6.88 % upvote from @boomerang thanks to: @digdaga

You got a 2.96% upvote from @buildawhale courtesy of @digdaga!
If you believe this post is spam or abuse, please report it to our Discord #abuse channel.

Enigma sharks I like best friends, I upvote and resteem yes.

I love anything with water, and I prefer to be in the water as well :)

This post has received gratitude of 4.47 % from @appreciator thanks to: @digdaga.

You got a 2.43% upvote from @postpromoter courtesy of @digdaga!

Thanks for sharing your post with us about photography

Those pictures are amazing. I really like that first one of the Killer whale.

I do love killer whales as well, and that photo is just amazing, thank you!

Animals are the closest and most devoted friends of a person. They are more sensitive and loyal to people. They are ready to be from the very beginning, and some of us do not understand this ... and the animals are on the street.

Indeed they are and thank you for this comment.

Animals are part of the natural law, they have their rights, because they are reasonable. Thank you for your post, I liked it. I wish you a good day and all the best.

I agree with you, Animals have the right to live and we have the right as the supreme species on this planet to protect them and make sure they do go instinct.

@digdaga sir this so wonderful amazing.

long time i did not visit your blog @digdaga. the first photo, made me think it was a photoshop editing instead of a portrait using a camera and this is really impressive. and in the photo of the kissing fish, makes me tickle to laugh, like a couple kissing on valentine day only

In the photo that shows two fish kissing, they are actually fighting :)

Amazing photographs... I’m in Love off all..
following you and upvoted this post.
Please if you have time go check my blog and see my story. Regards form Venezuela

I will take a look for sure, and many thanks for the upvote and re-steem.