The Quacking In The Grass Started Earlier This Year 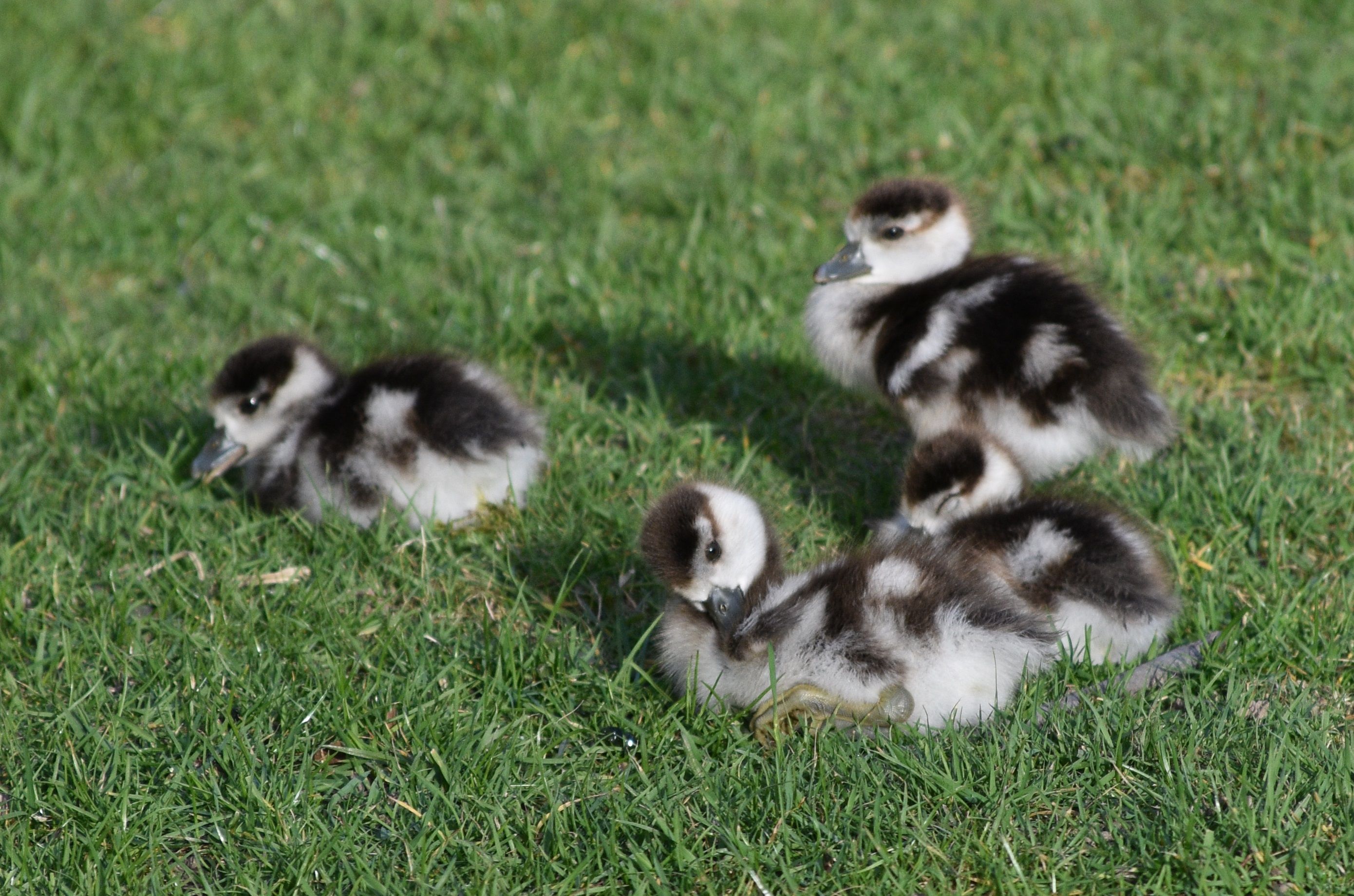 "Quack, quack, quack,.." goes the tall grasses along the banks of the man - made mere these days. A few ducklings must have already hatched, yet no sight of them because Mama duck has managed to hide them from us very well. The side of the mere is covered of thick grass bearing white flowers and hopefully the mowers stay away. Please people, think eggs and bugs between those! While the geese and the coots are probably still sitting on their eggs, I awake with that sweet peep of quacking ducklings. They remind me of my childhood days in my grandparents house. That constant running after the yellow balls of fur and letting them swim in a basin full of water when we get to catch them. Those were the days ... indeed.

Well, the Nile geese beat every waddling creature here were showing off their lings as early as the first week of April.
I stalked one grazing in a park then. Unlike the normal geese, their parents just stared at me and though their eyes looked very very stern, I could sense that they were more scared than threatening. 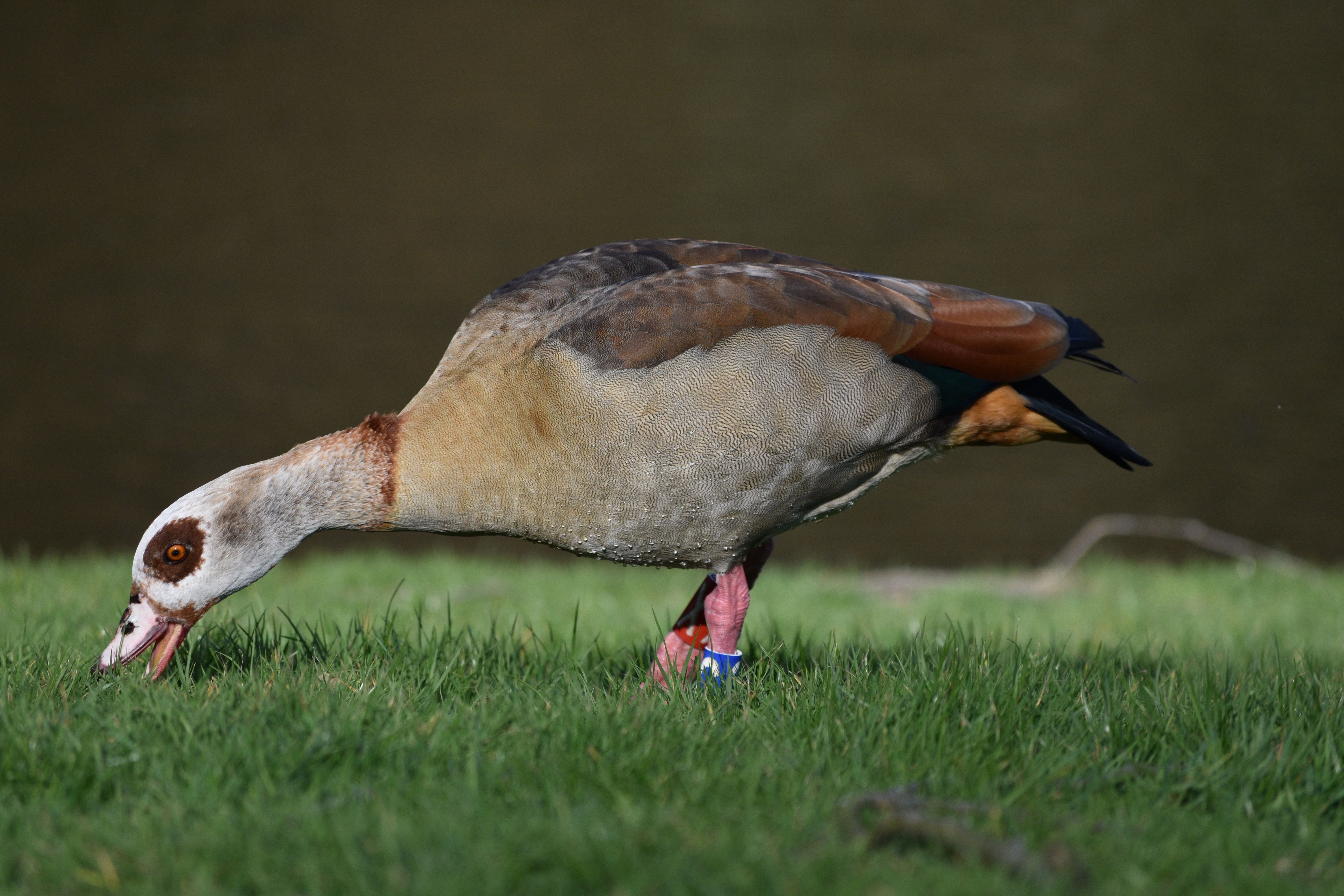 A normal geese with their young would hiss on you if you take even just a step closer to their young but not these. The couple were just on guard, watching my every move at first and they just went on grazing later on .. totally not minding me being there as if I don't exist at all.

A normal baby goose would run towards the water as soon as you approach them. These ... they just went on grazing and even dared waddle far away from Mom. 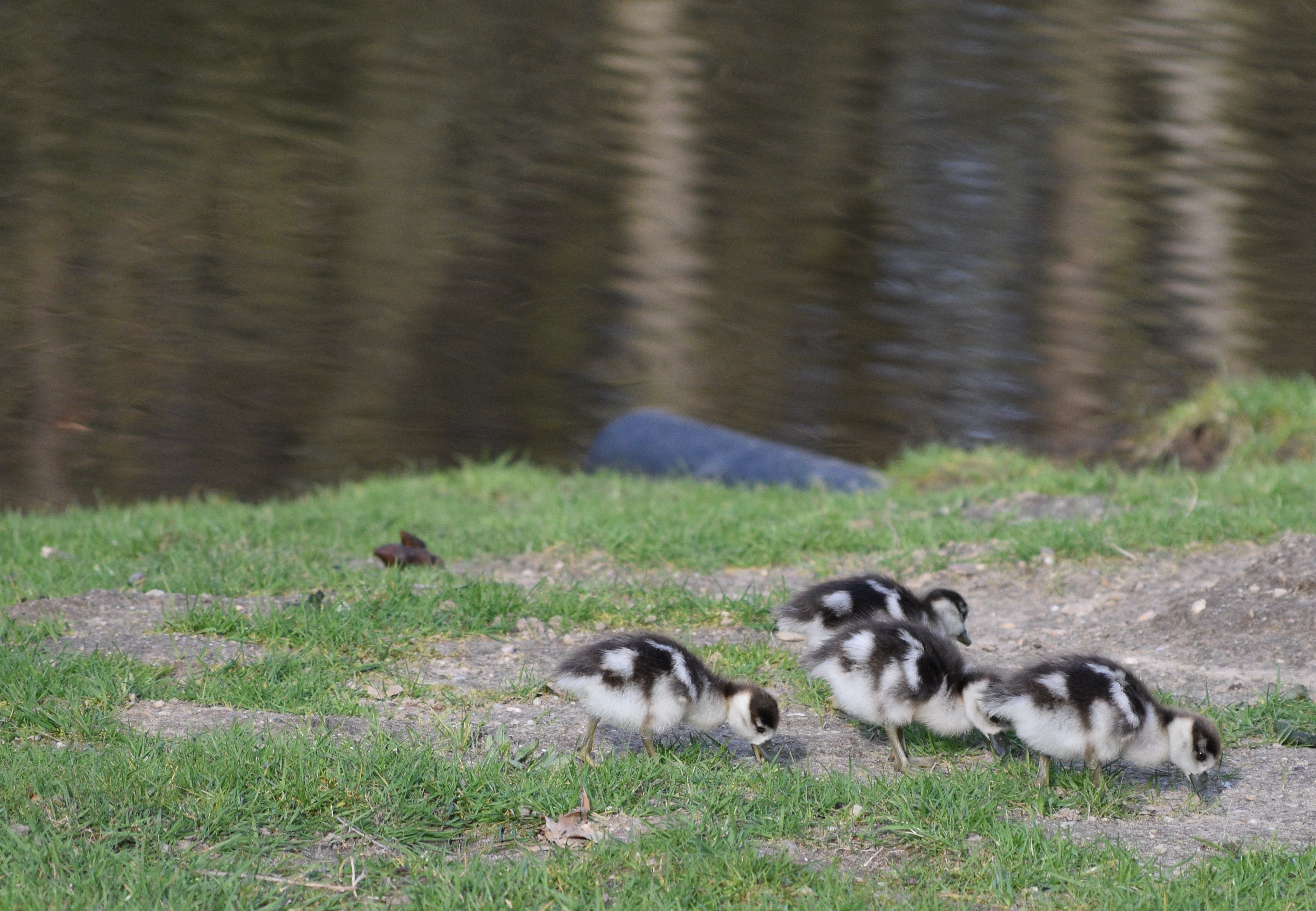 It looks like these haven't learned that begging thing yet. They were just happily grazing like their parents are. They look content with the grass and when someone threw them a piece of bread, they just ignored it, too unlike how the ducks would probably run towards it and peck like there's no tomorrow.

I wonder how long these guys would stay true to their nature. They say the environment you often are in could shape you, have a huge influence on you so I wonder if one day, they'd behave as coots and ducks do now... like puppets to the sight of a bread thrown at them.

Perhaps, it would still take years before they do that, these guys were on a solitary mode that day. No other geese nor ducks on sight where they were so I guess the parents know, hanging out with the wrong companion gets you to learn what nots. I have to admit, if ... and only if, they were in my own terrain, I'd do .. chase after those cute cuddly looking balls of black and white fur. That's the downside of being in the West, you can enjoy watching the birds and they'd come so close to you but that's it .. hands off!

Well, I don't mind at all because nature is supposed to be left alone.

This content's 100% mine . I took the pics with my D Eye.. Right click on the pic to open it on a new tab.
**TIP :
ONLY Upvote POSTS THAT ARE 6 DAYS OLD below to earn yourself curation rewards.

photography story thenetherlands ocd-resteem animals
3년 전 by englishtchrivy72
$47.96
125 votes
댓글 남기기 41
Authors get paid when people like you upvote their post.If you enjoyed what you read here, create your account today and start earning FREE STEEM!
STEEMKR.COM IS SPONSORED BY

They still do not know about the dangers that may come.

But such is nature for humans, animals and everything living on this beautiful earth we have.

Hope we humans soon understand what we have.

Thank you for the photos you share with us @englishtchrivy

they look so fluffy cute :)
and yes you're right ... very innocent and laid back
no fear yet
and hopefully it stays as so

Your pictures are lovely. I feel like I am right there with the birds.

I have 2 opposing feelings when I am close and get to interact with wild animals. First is the wonder they create within me. To be right there and be part of their community.

The second is what you expressed. I should leave them alone to their own nature. They are too friendly with me and may mistake that to hold with all "mankind". That is especially problematic where I am because there is a lot of hunting done here. They should learn to be more afraid of "man" for their own safety.

P.S. I am mainly talking about the deer and the rabbits that we have roaming here.

it's always a tempting sight :)

I don't know .. perhaps if we just treat them with respect, fear is not necessary
as long as they don't get threatened and we let any animal be, they don't really do much harm
compared to that hazard that we're capable of doing against them

that's sad they're getting hunted
well, some people need to eat I guess :)
they should try more greens, :D keeps one slim and alert
plus doesn't fasten aging ;)

Yes, people need to eat differently....more fruits and vegetables. I've been a lacto-vegetarian for over 40 years and it has been good. Definitely more healthy.

Re: Hunters - West Virginia, where I am in the US is economically very depressed and so many people need to hunt to provide food for their families. I can't blame them for that.

I'm living at a retreat facility for meditation and we don't allow hunting on our land, so the deer are safe here.

I am wondering those rings with letters on the mother ducks legs are mean something or not, it looks like "A" and probably "U". Those little ducklings the same way as little chicks are just calling cuddling. as child I was trying to catch them, but they are unbelievable fast and you always loose. But it was a great fun!

Cheers and have a nice, @englishtchrivy

no idea what the tag is all about
am guessing .. for counting them?

those black and white ball of furs were too quiet
no honking at all
not even a tiny peep :)

I would never dare try catch a goose's baby they could be very very aggressive compared to ducks :)
the ducks would even give you their babies here just to get bread hahahah ^ ^

Photography of ducks is very nice. I like the kids very much. It takes great pleasure to touch. Thank you.

Geese are so fierce when they charge, it makes Rottweilers weep in shame.

The environment changed them that's why they care less when a bread is thrown and become so human friendly so they don't have to run like their ancestors did when they see any human aside their owners.

Duck lives are easy, just say Quack Quack. Grazing and after that go have a shower or swim in the water. Easy life, wish human lives was as easy as this.

what's those markers on their legs?
are they tagging the birds?

yes, they're counting them here
that's protection
so they won't be eaten or stolen and served in a resto

there's more to the tag
I just don't know what .. tracking or something ..
they must also be counting them
it's a good thing, that's for sure

they're here permanently it seems
no need for visa or citizenship application :)
cool huh

that's the best thing about it
they were successful with the normal EU geese so I won't be shocked if these guys thrive here, too

the whole world should learn :)

does the world ever learn?

nice writing. love to know it

Cute! Wishing you a wonderful day!

Great pictures! Don't feed the ducks bread though, it doesn't have any of the nutrition ducks/geese need, throw them some seeds or fresh clippings from the garden. :)

That's good, slugs are very good for them; and it helps out the garden too! :)

I don't understand why there is a bracelet on the foot of the duck it ivy ..? I see there are 2 colors on its foots..thanks.

very good photos, and nature is wise the animals are very intelligent so much so that the mother knew that you wanted to approach

The ducks are very beautiful whether it is your pet ducks @englishtchrivy or wild ducks ? 😊

They are so cute, all these newcomers!
What a joy to approach them and make beautiful pictures.
Until they grow up, protect by their mother.
I'm waiting to see them bigger!

Perfect Shots...@englishtchrivy Maybe they had been feed by someone before they got to that place or environment changes something about them, Its not common to see goose /duck been throw something eatable like bread, they do rush it as they been starving for decade lol especially their young one but with these duck you came across not so.

Time to quack the heart out so amazing post today :D