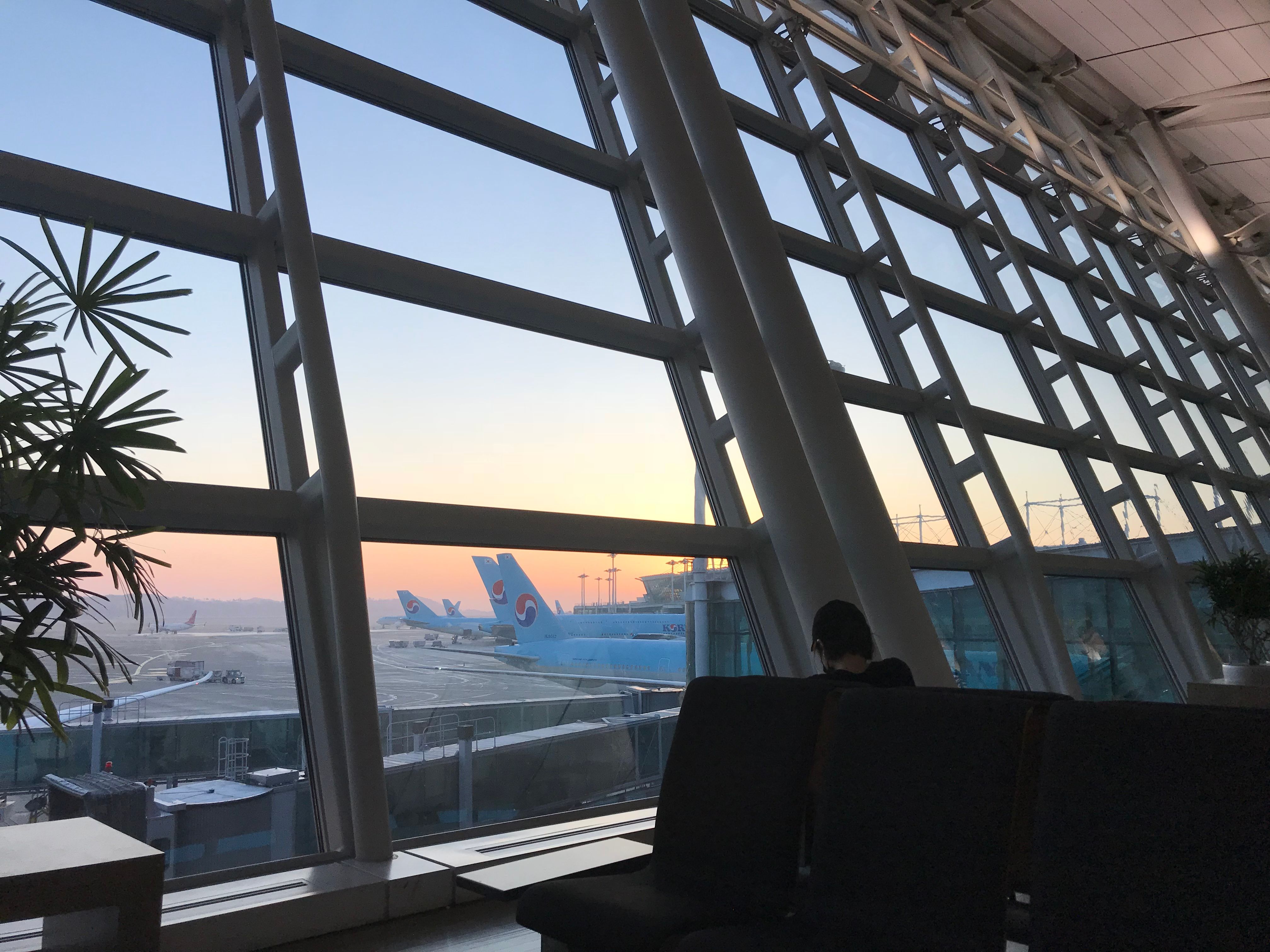 This morning doesn’t even seem like a different day...

Just an extension of yesterday which started early with buses and airports and airplanes and then morphed and merged into me sitting in Korea in a sleep-deprived haze, sipping Dunkin‘ Donuts coffee... 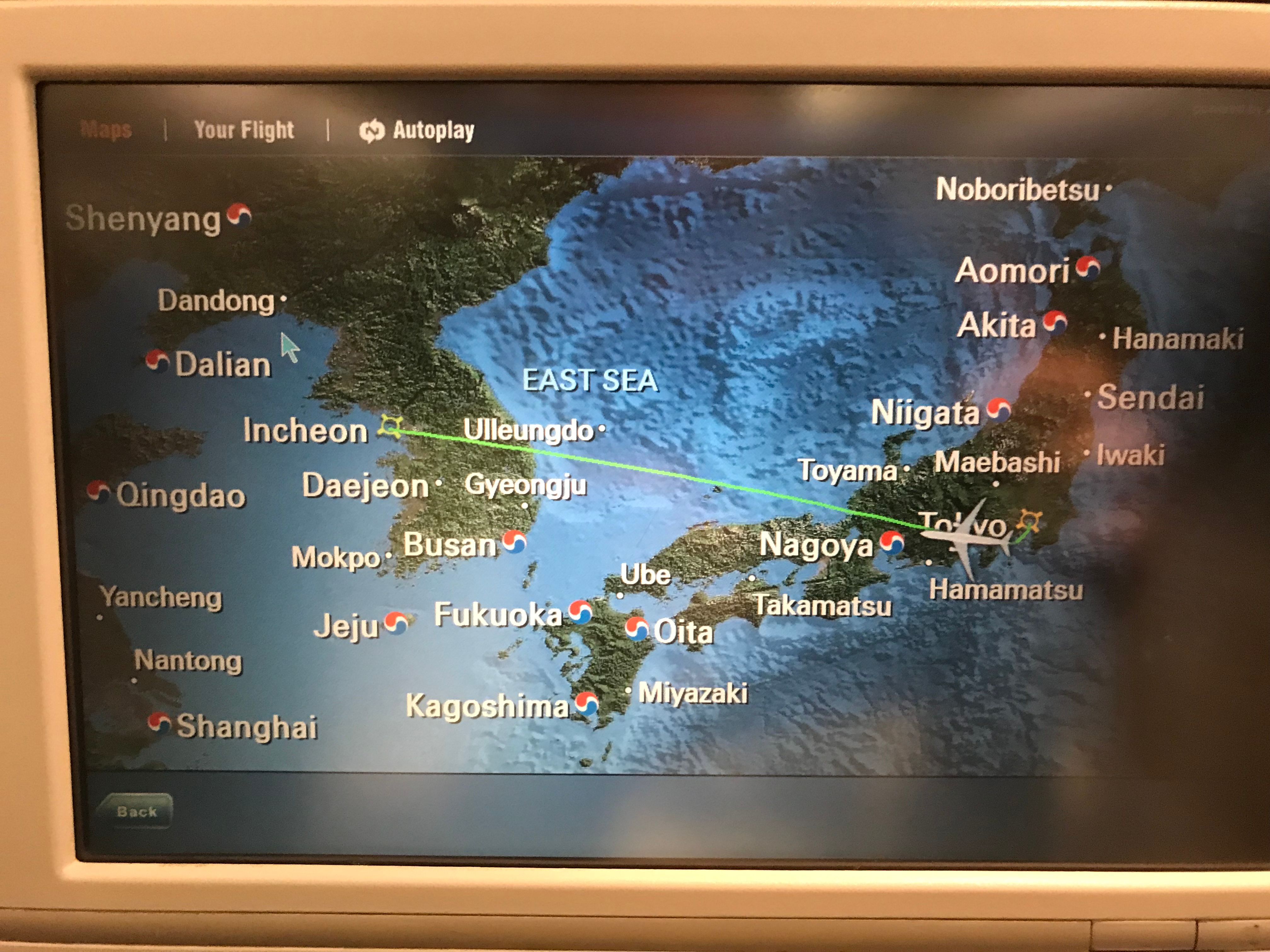 A short, red-eyed hop across the pond... Arriving at Incheon in Korea this morning. 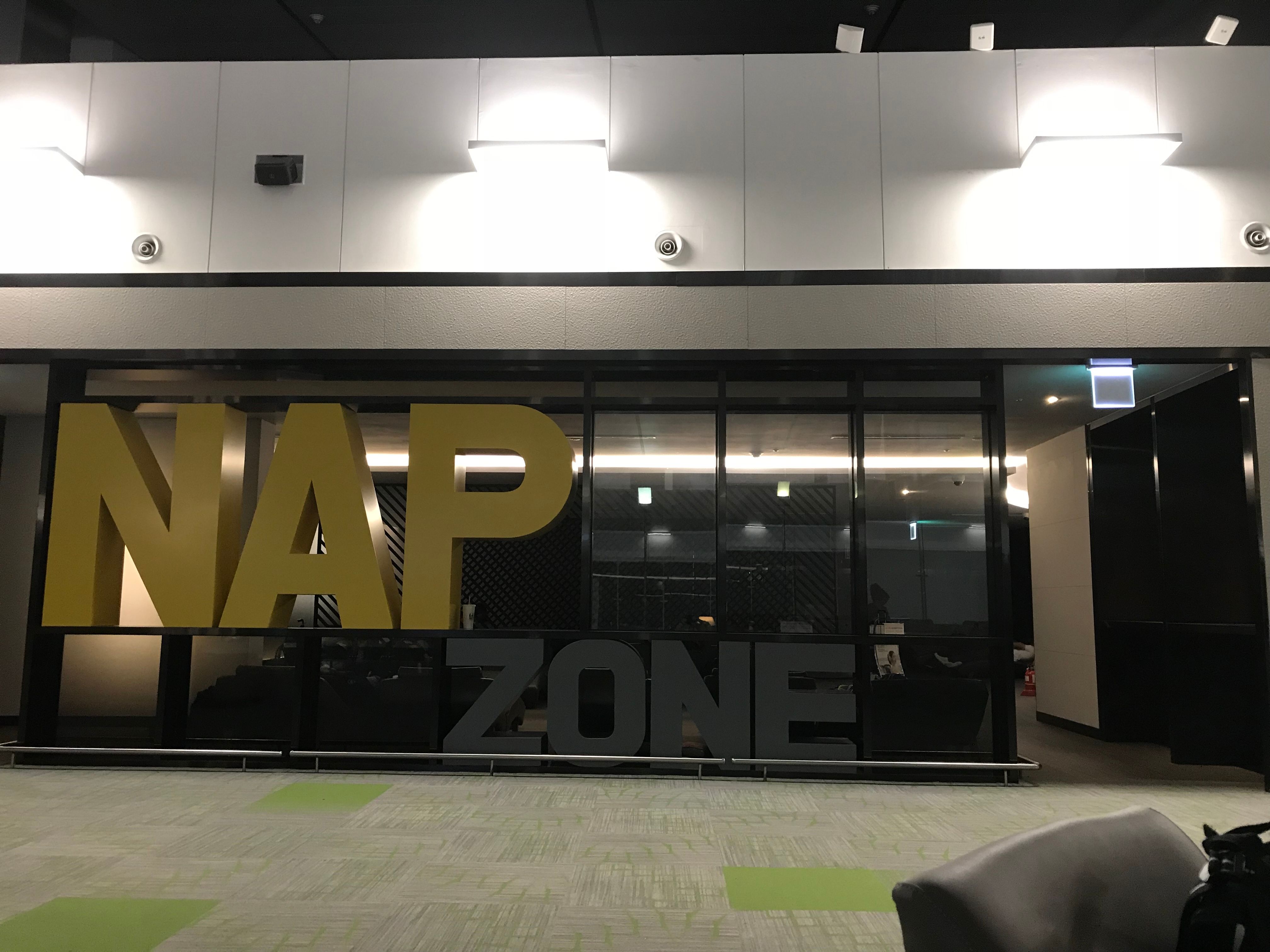 So how is Incheon International, after all the hype I saw about it on YouTube the other night?

It’s big. It’s pretty. It seems kind of innovative as far as airports go. I haven’t had time to explore it all. Here is the interactive “K-Pop Zone” and “Fashion Zone,” where you can attend a “live concert” “front row,” or stand in front of the cameras and let the computer try on lots of different styles for you. One thing I didn’t expect to see, though, was all the garbage in the lounge area. Empty paper cups, snack wrappers, and other such flotsam and foodstuffs littered all over the floor. Things were just...disorganized. I felt like I was back in...America.

After 7 years in Japan, where people routinely clean the streets with tongs and white gloves even when there’s nothing to clean, this kind of thing jumps out at you. It was the same when I returned to Chicago 4 years ago, too.

To be fair, it was three a.m. But yeah, that lounge would have never passed the “order-is-more-important-than-your-soul” J-culture test.
Bad with the good, good with the bad, right? I gotta say though, I do enjoy the cleanliness of Japan. The bathrooms are second-to-none, and the attention to presentation and “wa” makes things more enjoyable for me.

On another note, folks here in Korea seem to be a bit more direct, than in Japan, generally speaking.

I just bought Isaiah a toy from a little souvenir shop here in the airport, and dealing with the lady at the register was kind of fun. She kept holding her hand up as she tried to punch some numbers, telling me simply “Wait. Wait.” Someone came in and attempted to offer her a toy to buy or exchange and she waved this woman off without a word. The man at the drugstore smiled and said hello to my son in a very genuine way. This happens in Japan, too, but the feeling of directness I get here is a bit different..in general. And I do like and appreciate directness. 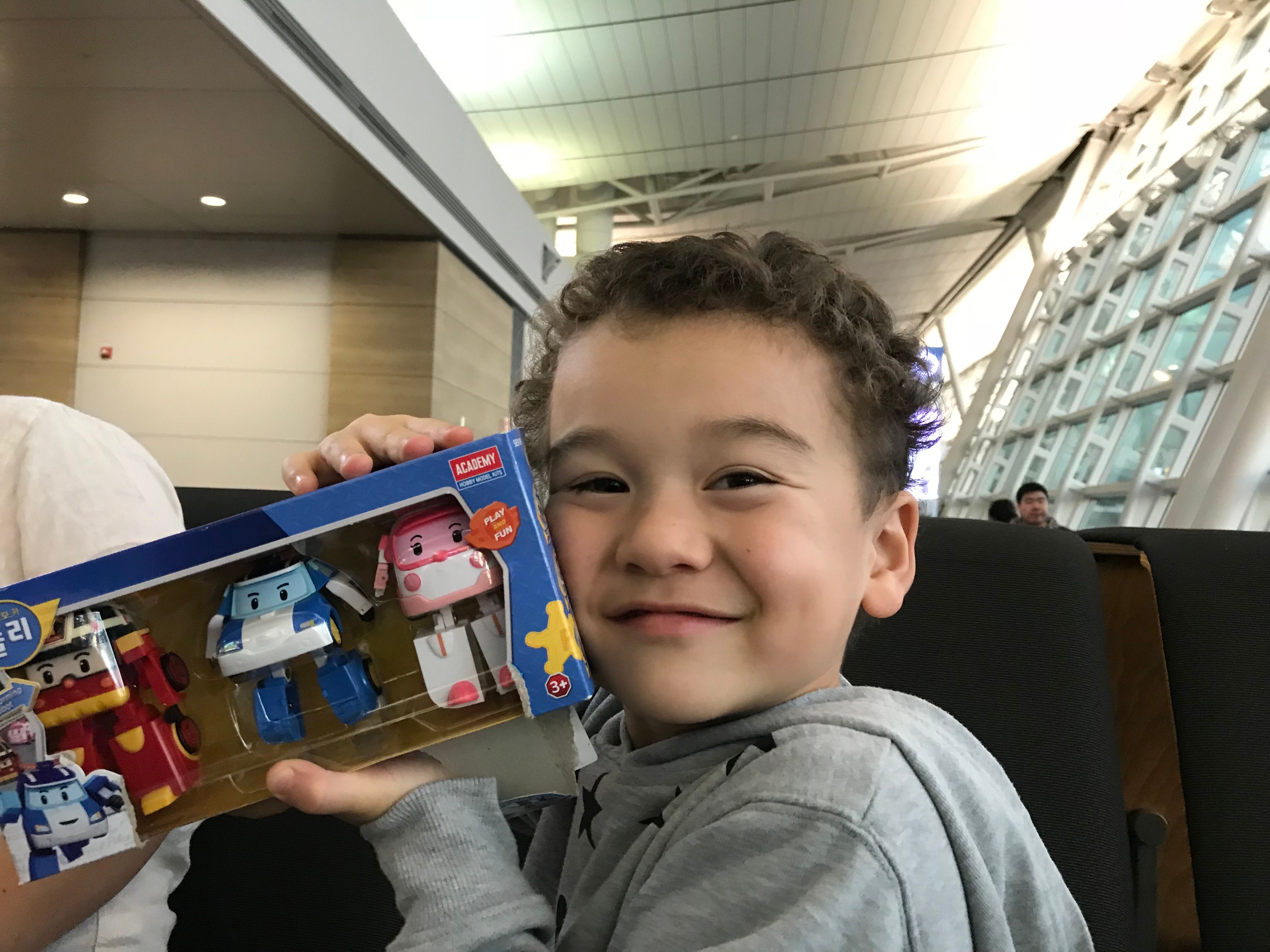 Graham Smith is a Voluntaryist activist, creator, and peaceful parent residing in Niigata City, Japan. Graham runs the "Voluntary Japan" online initiative with a presence here on Steem, as well as Facebook and Twitter. (Hit me up so I can stop talking about myself in the third person!)

photography travel japan korea blog
3년 전 by kafkanarchy8474
$117.79
99 votes
댓글 남기기 19
Authors get paid when people like you upvote their post.If you enjoyed what you read here, create your account today and start earning FREE STEEM!
STEEMKR.COM IS SPONSORED BY

Haha, I remember flying from Narita Airport to Bangkok after a little while in Japan and noticed the shit piled up everywhere. You get used to the unbelievably clean streets in Japan and really notice it when you go anywhere else.
I guess Korea will help segway you back to the decay of western society, I sure you'll notice the piles of crap everywhere when you get back Stateside dude.
Have a great flight buddy 😉

I guess Korea will help segway you back to the decay of western society...
Hahah, this is an excellent way to think about it.

Although I live in Taiwan (a sort of second-hand Japan), I know what you mean about super cleanliness and I do enjoy it.

The Nap Zone in Incheon Airport sounds like a nifty idea that other airports should copy. It probably beats paying through the nose for a few hours of rest in an overpriced airport hotel. Thanks for the photos (your son is so cute!)

Thank you! Yeah, those airport hotels seem like they'd be a bit pricey. I've never stayed in one, myself, though.

Really wanna visit Taiwan sometime! Thanks for the comment!

Glad that you made it to Korea @kafkanarchy84! I bet you and Isaiah are beat!

Working for a Japanese owned company, I know exactly what you mean by "order is more important than your soul" lol. The 5-S principles are our Bible.

Have a great trip and find some rest lol!

Yep! Brutal. Cheers, @jbcoin, will do!

Good stuff @kafkanarchy84! Thanks a lot for sharing this great post! Upvoted and followed! (Please follow back and upvote if you feel to :) )Greetings from Spain! :)

Nice, it looks luxuriously for the airport;) I would like to wait there for hours and absorb the atmosphere

The right move is to be honest. All photos are sweet :)

Nice.. enjoy your Korea tour.. Hope you'll have some memorable time there.. photographs were excellent..
Lots of love to Isaiah..
Resteemed.

I will never forget my first experience off the Incheon airport! Coming from warm country and feel the freezing cold just right after I step out the plane, I underestimate the meaning of winter season! I went to Myeongdong, nami island, seoul tower, the palace i forgot what's the name. I even experienced wearing the hanbok dress! Unforgettable winter experience in Seoul! Enjoy all of you. And Isaiah is soooo cute! Advance Merry Christmas!

That layover was a little too close to rocket man haha. Have a safe Trip!

Awesome! love seeing various viewpoints on cultures ! thanks for sharing :)

Congratulations on a very informative article . have a nice day

I would like to meet japan and korea very beautiful places

you have a very nice article and congratulations