Good afternoon Steemit!
I's time for my fourth #photofeedback already. I'm pumped by the fact that people like my posts and I look forward to write more of these for you in the near future. Your comments motivate me and make me want to improve this series as much as I can. I need you guys for this! So if you have comments about improving this series in any way possible, please leave them as a reply on this post. I will read them and use them for improvement of this account.

And remember: if you want a photo reviewed by me, please post it as a new story on your feed, with the hashtag #photofeedback and I will provided detailed feedback on your picture. If possible, please tell me the camera and settings that you used for that specific picture. Thanks in advance!

My fourth feedback will be of a picture by @deborahmack, which she shot for the Monday Red Colorchallenge. As her profile tells you, she loves photography and she has uploaded some amazing shots! Please visit her profile and leave her some upvotes and a follow, you won't regret it!

The picture I'm about to review was shot in Canada, at the Fisgard Lighthouse. This was the first lighthouse on the west coast of Canada and it was built in 1860! The lighthouse is located adjacent to Fort Rodd Hill, which was used to defend Victoria from naval threats. Considering these impressions, I imported this photo into Lightroom and made some minor adjustments. This is the end result: 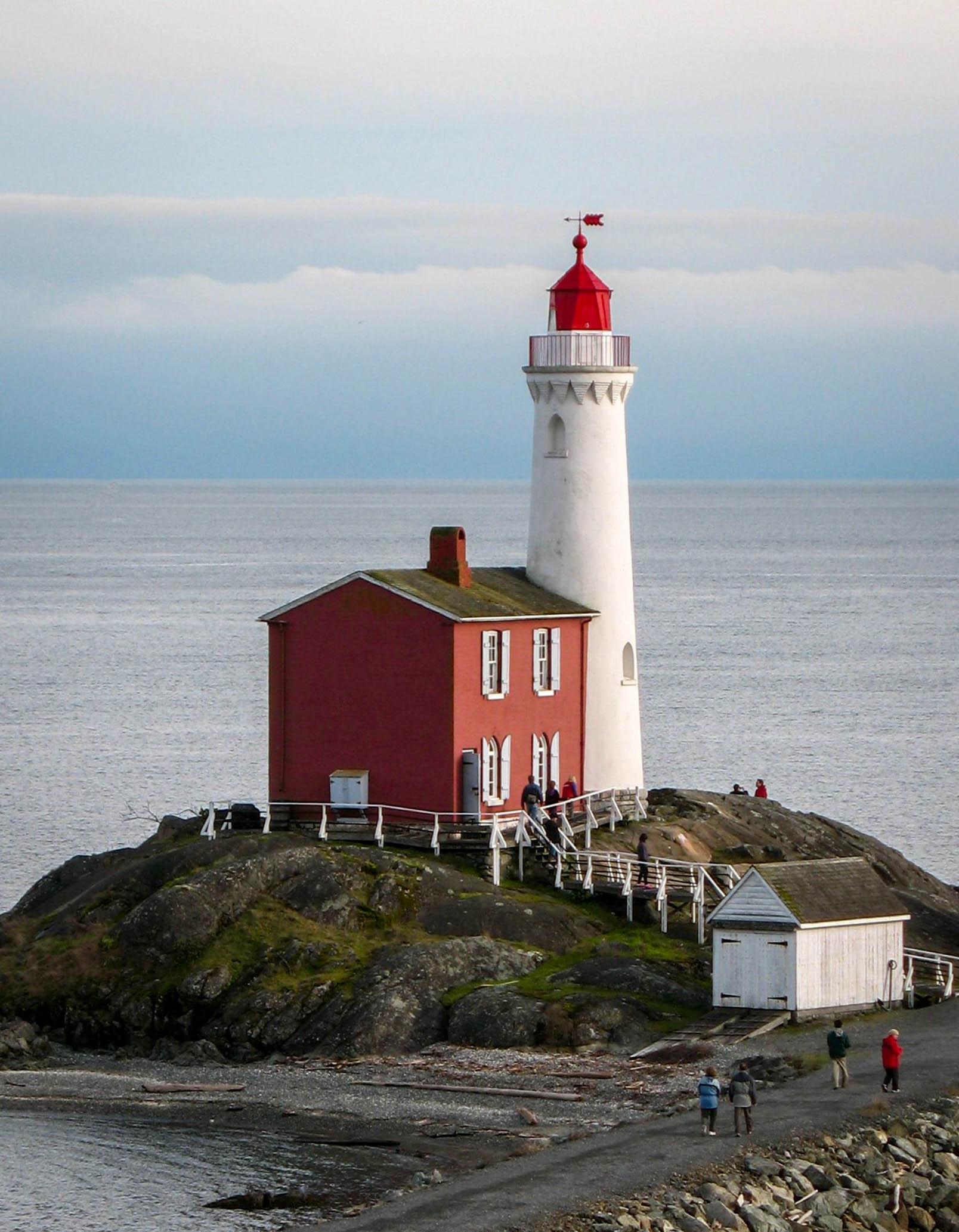 As you can see, the picture has a bit more noise in it now. This is because it is a small sized JPEG and when I upped the contrast and exported the image, the noise became more visible. But it doesn't bother me too much.

What would I do differently?

Conclusion:
@deborahmack did a good job shooting this picture. The main things (horizon, people and ship) that were making this photo less pleasant to look at were easily removed. She did a good job on the composition/crop and especially the horizontal angle it was shot at. In the end, these things are the hardest part of photography. If you understand composition, the rest will come more easily in my opinion. Deborah definitely has an eye for photography and I really hope she will keep improving and entertain us with her shots and blogs.

Thank you very much @deborahmack for letting me review your picture! It's great to do this work, because it makes me look at photos in a different way. This helps me to improve my own skills, while helping others improve theirs.

I look forward to reading your responses.

photography photofeedback photo life blog
3년 전 by photofeedback48
$4.30
41 votes
댓글 남기기 38
Authors get paid when people like you upvote their post.If you enjoyed what you read here, create your account today and start earning FREE STEEM!
STEEMKR.COM IS SPONSORED BY

This is uncanny, just as I thought of you, I see that you just posted again. So I get first draw at upvoting!

By the way I am currently not the furthest from you, being in Sweden, and am heading to Germany for Christmas!

My advice for your posts would be maybe try and format your text a little wider apart, and try learning a little more markdown stylings to help you out!

Nonetheless, value is value and it will be appreciated, in that sense, you're doing great and will always have my support.

Haha nice! Thank you for leaving this comment, I really appreciate any feedback given by others. I will definitely try to learn more about markdown to make my posts more pleasing to read.

I'm jealous of you being in Sweden, it's such a beautiful country! Enjoy your time there

Sure thing! I'm glad I can help.

Indeed it is, I am born and raise in the modern city of Singapore and I absolutely adore the old architechture of Sweden. I really onyl started taking photos when I first came to Sweden. That's what really got me started.

Even in the town, I can almost feel the age of this place, I love it. img credz: pixabay.com
Nice, you got a 98.0% @brains upgoat, thanks to @ansonoxy
Want a boost? Minnowbooster's got your back!

Another great, detailed and useful post. Thanks to @deborahmack for providing the photo. Could you explain what the vignette is and how it is done? I haven’t heard the term used with pictures.

The vignette I added in the review is barely visible, but when you see the before and after vignette pictures next to each other, it suddenly becomes obvious.

Thanks. I think I will have to play around with that. I normally use GIMP mostly just to crop pictures but I have a free trial of Lightroom after seeing what you are doing.

That's great. Lightroom takes some time to learn, but with Youtube videos and some articles you will quickly understand it.
There isn't a piece of software I'd recommend more than Lightroom.

When I see this photo that @deborahmack took, all I can picture in my mind is a monochrome rendition with added drama in the skies. The tastefully applied processing certainly does raise the image up a level for sure. Nice concise critique and advice.

Hmm yeah, maybe I should have added a monochrome version as well! I just converted it to b&w in Lightroom and indeed it comes out quite nice.

Some valuable and interesting posts over here :)
I must follow you!

Thank you very much @ananuaremere! I quickly checked your profile and already like what I see, you've got a follower too :)

Much appreciated! See you around!

Nice initiative you started there. Really like it! Now following you...

Wow! You did a fantastic job on my picture. Thank you very much for taking the time to do this. I appreciate the advice as I am a complete novice and have much so much to learn. You are a complete gem and will fit in perfectly and will be very successful here. Thanks again :)

Thank you so much for your kind words @deborahmack! It was an honor to do this and I hope you learned something valuable.

It's beautiful, I'm sure you will enjoy it here.
Lots of Steemians love photography.
I like your photo reviews:) very interesting for me, new things to learn.
Enjoy and have great time:)

It's a very good post and you were dead on with your critic of the photograph. It was a good picture to begin with and your edit made it that much better.

It was good you highlighted what the photographer did right while offering suggestions of what she could have done to make the photograph better.

At the same time as a reader of the critic, I found it educational making me think about and being more aware of the photos I take.

One suggestion I would make is in the future proofread your posts a little bit closer or have someone else read them for you. The first word in the critic after the introduction is misspelled and there was a least one instance where you appeared to change your mind on how you wanted to say something but didn't complete your edit, "I normally don't like it to remove objects from my photo by using spot removal." These are the kinds of things that are very difficult for the person who wrote the work originally to see.

Overall, I really like what you are doing here, providing a great service to both the photographer and the reader.

Now that is some helpful feedback doc, thank you so much.
I think it a good idea indeed to have someone else read my post before I upload it.

My English is not perfect, so I´m not able to spot the mistake in "I normally don't like it to remove objects from my photo by using spot removal". Should it be "I normally don´t like removing.."?

Thanks again for your detailed feedback,appreciate it a lot!

Your English and writing is good, just common mistakes and typos. It's a lot better than a lot of the native English speakers.

"I normally don't like (it) to remove objects from my photo by using spot removal".
Just dropping "it" would work just fine.

"I normally don´t like removing objects from photos by using spot removal".

This is a Fantasic initiative,
well done and the best of success to you!

Thank you very much @daveks! Number 5 is just finished hehe..

Very detailed and informative feedbacks. Definitely i will subscribe :)

Thanks a lot for reading and commenting, really appreciate it!

Since I have no experience with Photoshop (or anything similar), it would never occur to me to artificially change the colors within a photograph. On the one hand, the resulting photo was quite striking. On the other hand, that may not have been what the photographer actually saw. So I am struggling with the concept of trying to make a photo look better than the real objects look with the naked eye, especially when it comes to shadows and colors. I suppose that process combines photography with painting, making it a completely different form of art. I will have to think about this some more!

I agree with you on your point that it may not have been what the photographer actually saw. But I can tell with 100% certainty that her result wasn´t what she saw either. Cameras ´change´ a scene completely. If she had her aperture more open, the photo would come out overexposed. If she had a faster shutter speed, it may have caused the shadows to look way too dark.
So a camera actually edits what you see and captures it.

What I like to do in my edits is make subtle changes that enhance the overall quality of the photo. I think my editing is on the edge between ´changing stuff´ and ´making it look more like it was´.

It indeed is an interesting discussion on which there is no real answer. I always edit my pictures, some people never edit their pictures and leave them the way their camera edited them.
It is pure personal opinion.

When I learned about photography for the first time I read a sentence that I remember till this day: In photography, there are certain guidelines to make a picture look more pleasing, but there is only one rule: there are no rules!

Have a great day @scribblingramma!

Now I have even more to ponder! Thanks for the added information!

I just so happen to love lighthouses and going around photographing them! Thanks for this nice post with feedback. :)

Appreciate your response @ozhiya, thanks for stopping by! If you ever want one of your lighthouse pictures reviewed, you know where to find me :)! #photofeedback