Good afternoon Steemit!
Unfortunately I wasn't able to post a new #photofeedback in the past few days. I had a pretty bad strep infection in my throat and I didn't feel fit enough to focus 100% on a new photo review.
Luckily I feel quite a bit better now! The fever is gone and all that's left is a sore throat and a difficulty speaking. A perfect day for a post, because typing is possible with my mouth closed haha!

And there is news! @pentaxke submitted a photo by using the #photofeedback tag on his feed. He liked my earlier reviews and decided it was time for a review of one of his own pictures. Thanks @pentaxke for being the first one to submit a photo in this way!

He has a nice online gallery on ello. You can check it out here: https://ello.co/pentaxke. Also check out his feed here on Steemit and leave him upvotes, follows, resteems, love, Walmart coupons, whatever you think will help him grow his Steemit account.

@pentaxke came early to work, because he mixed up the weeks. Not wanting to go back home, he thought it would be nice to visit the zoo very early in the morning. Because it was still dark outside, all the nocturnal animals were awake and running around. One little fella kept running around while he was trying to take a picture. Just at the moment he wanted to give up and put away his camera, this South African springhare decided to sit still and @pentaxke managed to shoot the following photo: 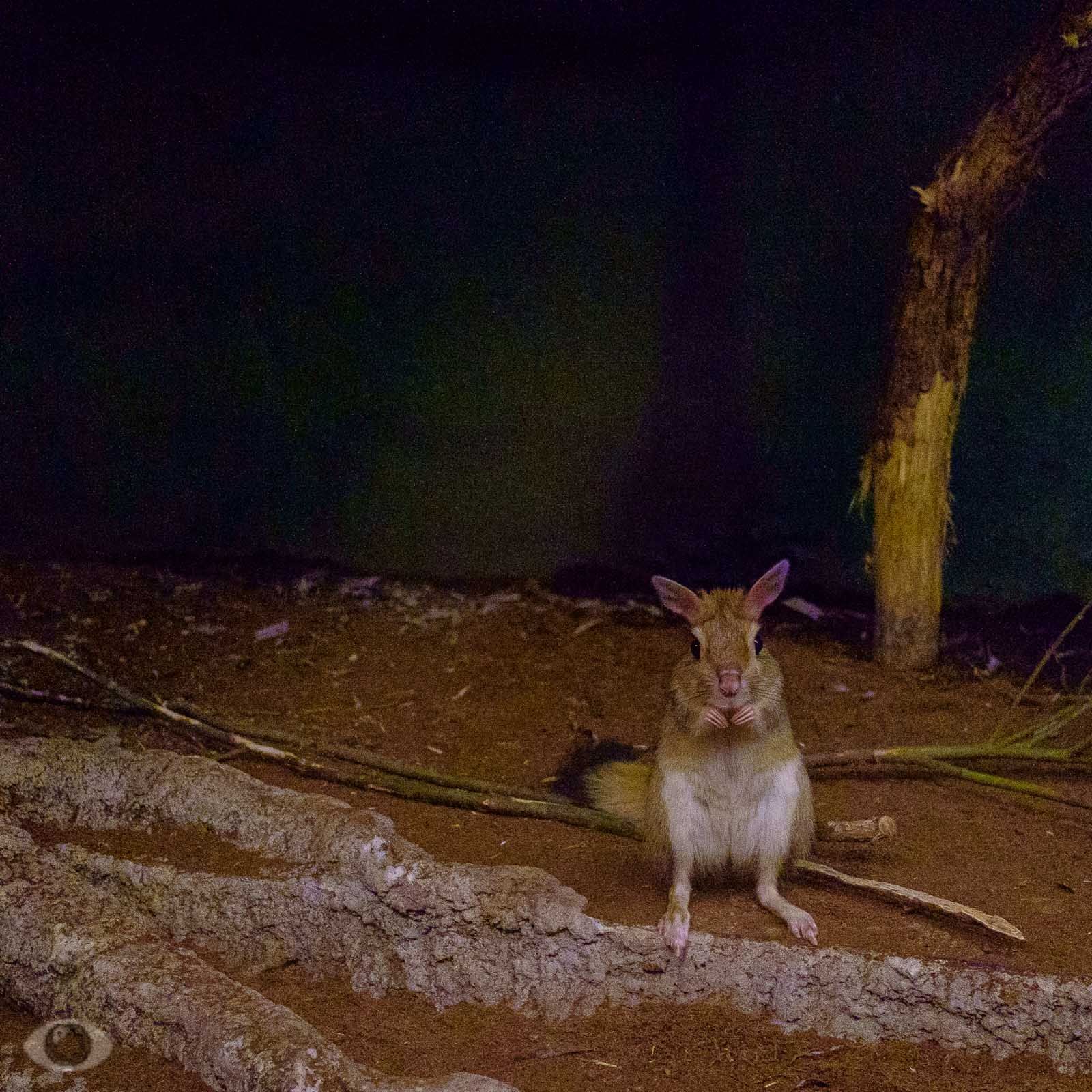 This picture was taken at very low light conditions, so you need your diafragm to be fully open to capture the most light possible. This lens' maximum aperture opening is f/2 and that's exactly what @pentaxke used to shoot this picture.
In these light conditions, you also need the lowest shutter speed possible. If you handhold your camera, 1/40th of a second is about as slow as you can go without introducing camera shake in your picture. I think @pentaxke did a good job with these settings (or maybe it was on Auto).
The ISO at 6400 is the maximum ISO value for this camera when shooting in JPEG. The camera chose this ISO automatically because of the low light conditions. That brings me to my next point..

I imported this picture into Lightroom and made two quick edits, which in my opinion improved the picture quite drastically. Here's the first one: I also made a second edit. Actually I just used the first edit, but cropped off a whole lot, to make it more like a springhare-portrait: 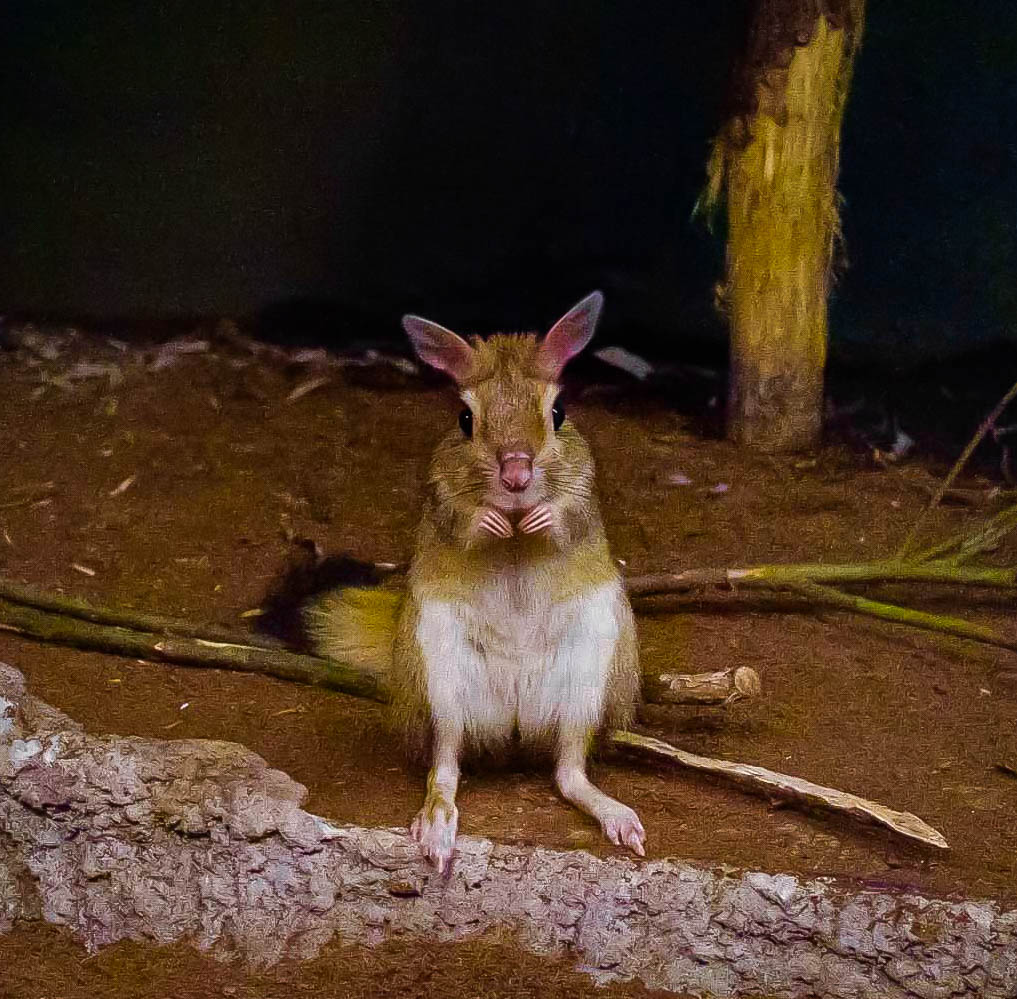 This edit emphasizes the cuteness of the animal a lot more, but it takes away some of the context and his habitat.

What would I do differently while standing there?

Conclusion:
I really like the timing of this picture. @pentaxke waited and waited and then decided to put his camera away. But at that moment the springhare sat still and he was able to take this shot. @pentaxke managed to capture the cuteness of this animal. It has a look in its eyes that says 'please, please give me some food' :).

Because of the low light conditions and the small file size, this picture came out very noisy. This is distracting and not pleasing to the eyes. Luckily it was possible to restore this a little bit in Lightroom so that the focus shifted more to the subject.

The story behind this picture is nice and really made me fantasize about @pentaxke walking around in a dark zoo, taking pictures of animals.

I think I like the second edit the most. This one is more like a close up portrait, showing more detail in the fur and really showing that hungry and innocent look in its eyes.

Thanks again for reading my post and a special thanks to @pentaxke for submitting this photo via the #photofeedback tag!

What do you guys think about this picture? And which edit do you like the most? Please leave a reaction in the comments to tell me what you think!

And remember, if you want one of your pictures reviewed by @photofeedback, please create a new post on your feed containing the picture and the hashtag #photofeedback and I will review it for you!

photography photofeedback photo blog
3년 전 by photofeedback48
$8.71
33 votes
댓글 남기기 23
Authors get paid when people like you upvote their post.If you enjoyed what you read here, create your account today and start earning FREE STEEM!
STEEMKR.COM IS SPONSORED BY

Wow, this one is really great! Awesome!

Thanks brother! Always great to hear from you

No problem! There is a new Steem-powered platform that is quite interesting.
It is called DMania.io, which instead of focusing on longer form posts like Steemit usally does, it focuses on single image content.

The creator is looking at it more towards it being a meme type platform, but I think photos will do great there too. It's worth looking into, I personally am working on improving that platform as is as I see huge potential for it.

Cool, I'll check it out!

@photofeedback: thanks so much for reviewing my photo. You did a great job!
To add a little context to it, I shot in RAW (although I reckon you can make a better LR edit than this like you proved), but conditions were such that everything was maxed out (f/2 and ISO 6400 is as far as the camera let me go and I figured 1/40s, maybe 1/30s is as low as I can handhold - my hands are not as rock steady as they used to.) So that were the settings I used and I hoped the best of it - the photo came out quite underexposed. So my photo is already heavily edited and cropped. The blue/purple haze is high color noise that appears in an underexposed ISO 6400 photo. If you like I can mail you the original RAF file and see what you can come up with using the original... I would be much obliged as I feel that I can learn something about LR editing.

Thanks again, I actually learned something. Your reviews are about the best that this site has to offer! Keep up the good work; I surely will check here on a regular basis...

Och, yes. A flash was out of the question, firstly because the X-pro doesn't have one and more importantly because the animals are behind glass. The reflections would kill the photo...

Och, and the Antwerp Zoo opens @10h00, but those with a pass (which I have) can enter as early as 9 o'clock... I was a little earlier but looking in a pleading way did the trick - they let me in! Apart from the zoo keepers there was no one. Really magical!

It was an honor to make this photofeedback @pentaxke!
Thanks for the context, I would really like to receive the RAW file and see what I can do. Can you please send it to steemitphotofeedback@gmail.com?

And about Lightroom: there are some real interesting and instructive Youtube videos on learning how to edit your photos more professionally. I used to watch them a lot and improve my editing day by day.

Cheers man, and thanks again!

I received it! Will try some things with today :)

this is awesome picture color details was good.

i have tried to capture a nature picture like this can you please check this out-
https://steemit.com/photography/@businessway/awesome-view-of-bangladesh-nature-of-chittagong

Thanks man! I finished your photofeedback yesterday. Please check it out and tell me what you think :).

your reviews are very detailed and thus interesting to read. thak you!

That's great to hear @zirochka, thanks! img credz: pixabay.com
Nice, you got a 95.0% @steps upgoat, thanks to @bitopia
Want a boost? Minnowbooster's got your back!

Thanks so much @bitopia! You are such a generous person. Appreciate it very very much!

I like how you retouched the image. Animal photography is tricky. I am surely going to learn from you :)

Your quality post caught my attention and I hope you benefit from my resteem. My followers have a refined appreciation for quality art. You might also enjoy my curated collection. To see the quality posts I have curated via resteem, see my blog @pixresteemer. If you want to know more about me and my mission, please check my introduction.
$0.00
댓글 남기기
[-]
buildawhale74  ·  3년 전

This post has received a 0.77 % upvote from @buildawhale thanks to: @photofeedback. Send at least 1 SBD to @buildawhale with a post link in the memo field for a portion of the next vote. img credz: pixabay.com
Nice, you got a 26.0% @rocky1 upgoat, thanks to @photofeedback
It consists of $3.14 vote and $1.05 curation
Want a boost? Minnowbooster's got your back!