Photos of Lisbon and Sintra

Hey guys! It's been a while. I promise to give you all a proper post with lots of words soon, but in the meantime, I thought that I would share some of the pictures that I took while I was in Portugal for SteemFest. Enjoy! 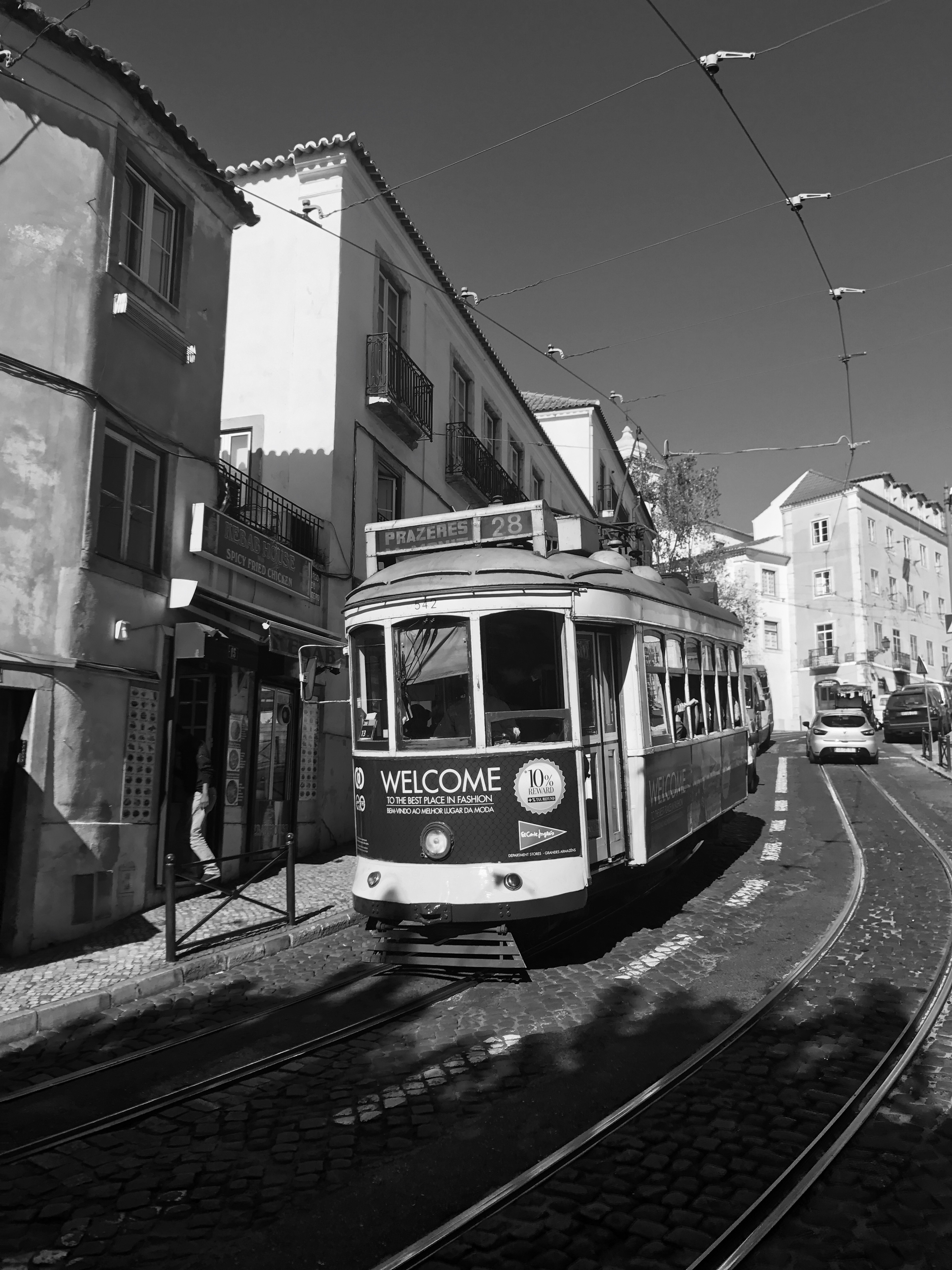 One of my favorite things about Lisbon was the trams. I grew up near San Francisco and always loved seeing the trolleys make their way through the city, but the trams in Lisbon are far more ubiquitous and convenient than the trolleys in SF. Come to think of it, Lisbon actually shared a lot with San Francisco... they're both gorgeous cities that overlook the ocean and were built on hills. But I have to admit, Lisbon has a certain Mediterranean flair that San Francisco lacks. Even though I was visiting in November, the weather was warm and the bougainvillea were in full bloom. This is a picture of a miradouro -- a viewpoint. Miradouros are scattered throughout the city, and I love that they were built specifically so that people could stop and appreciate the beauty of Lisbon. Wouldn't it be great if more cities had miradouros? I could see them being amazing in places like Vancouver, where you can see both the mountains and the ocean.... 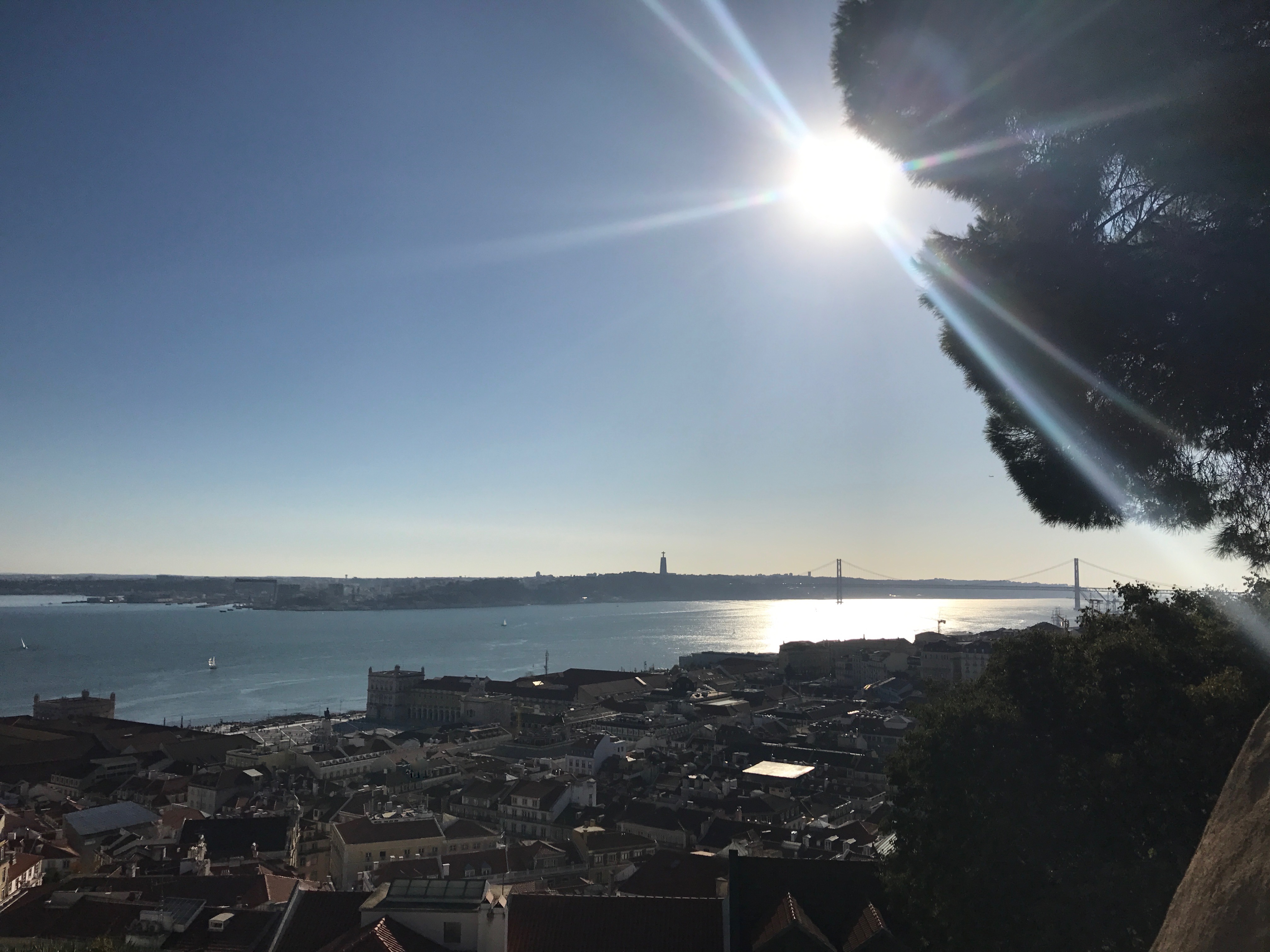 Speaking of places to enjoy the view, I would highly recommend the Castelo de São Jorge. I took this picture while standing along the wall of the castle, and it was definitely worth the trek up the hill to get there. If you want a truly unforgettable experience, explore the castle ruins in the late afternoon, then stay to watch the sunset over Lisbon. They even sell glasses of wine (and ice cream, if that's more your thing), which you can enjoy while watching the sun go down. Ancient castle ruins + gorgeous European city + sunset + wine = one of the most romantic things you can possibly do. 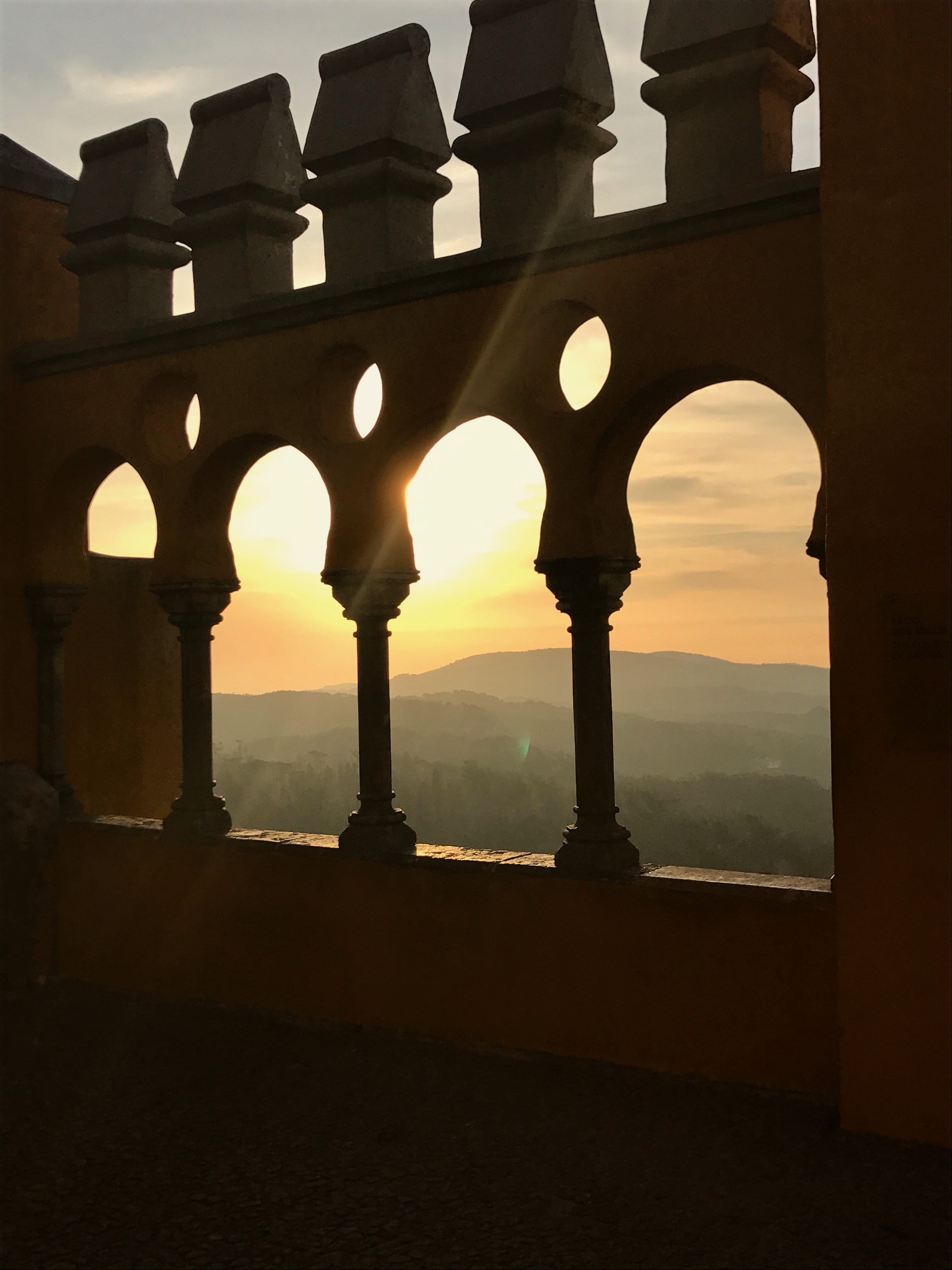 Aaaaand here are a few actual pictures of a castle sunset, since it seems unfair to tell you all about a gorgeous sunset but not show you one. This castle is in Sintra, which is a short train ride outside of Lisbon and has six (yes, six) castles that you can visit. This is the Pena Palace, which has a gorgeous mix of Moorish and European architecture. But -- real talk -- don't walk around its outer wall if you're scared of heights. 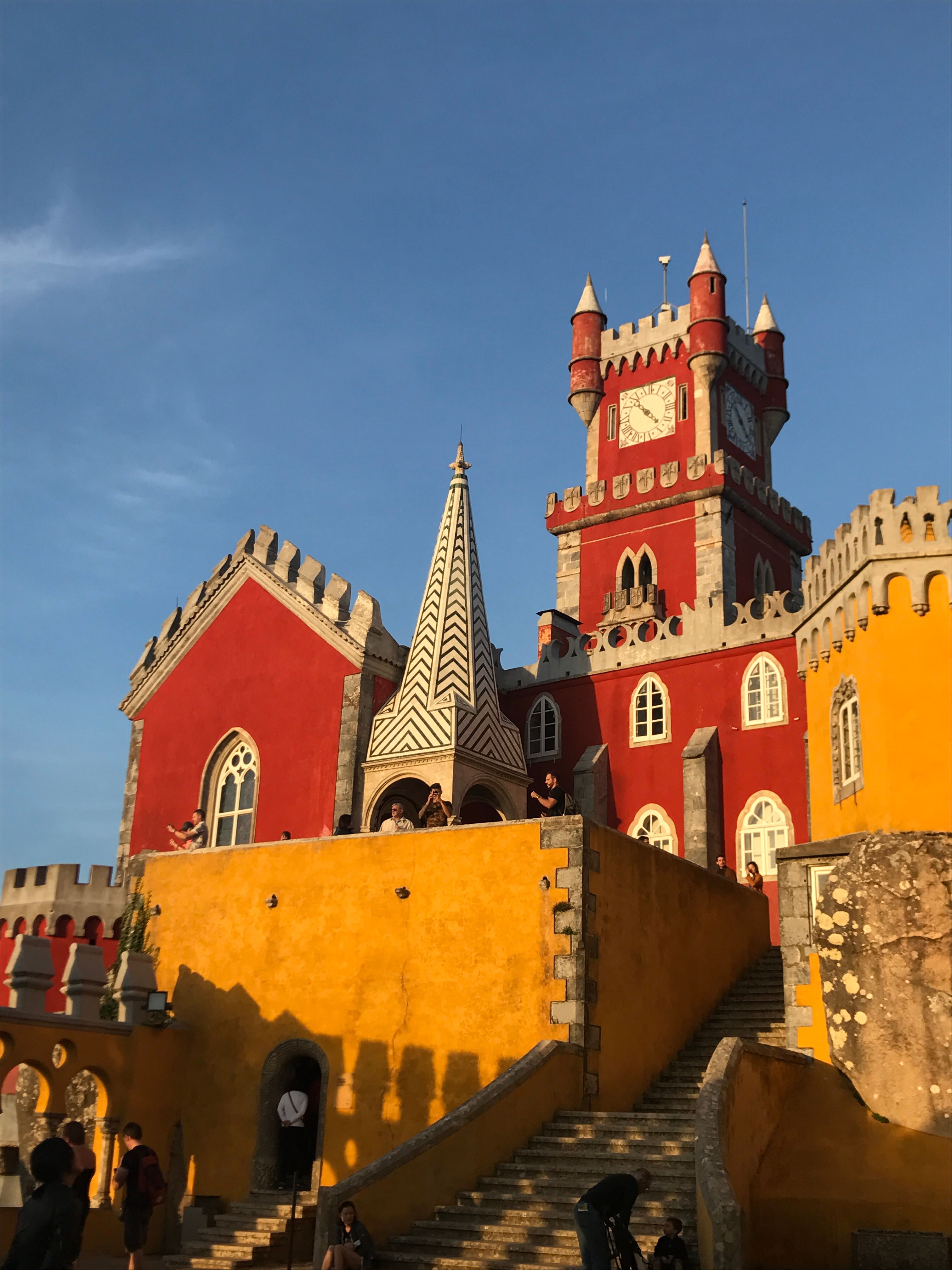 Another picture of the Pena Palace! Isn't it pretty? It's colorful and tiled and built on top of a mountain... I mean really, what's not to like? Seriously guys, walking around the Pena Palace felt like walking onto the set of a Disney movie. It was that gorgeous. Get thyself to Sintra. 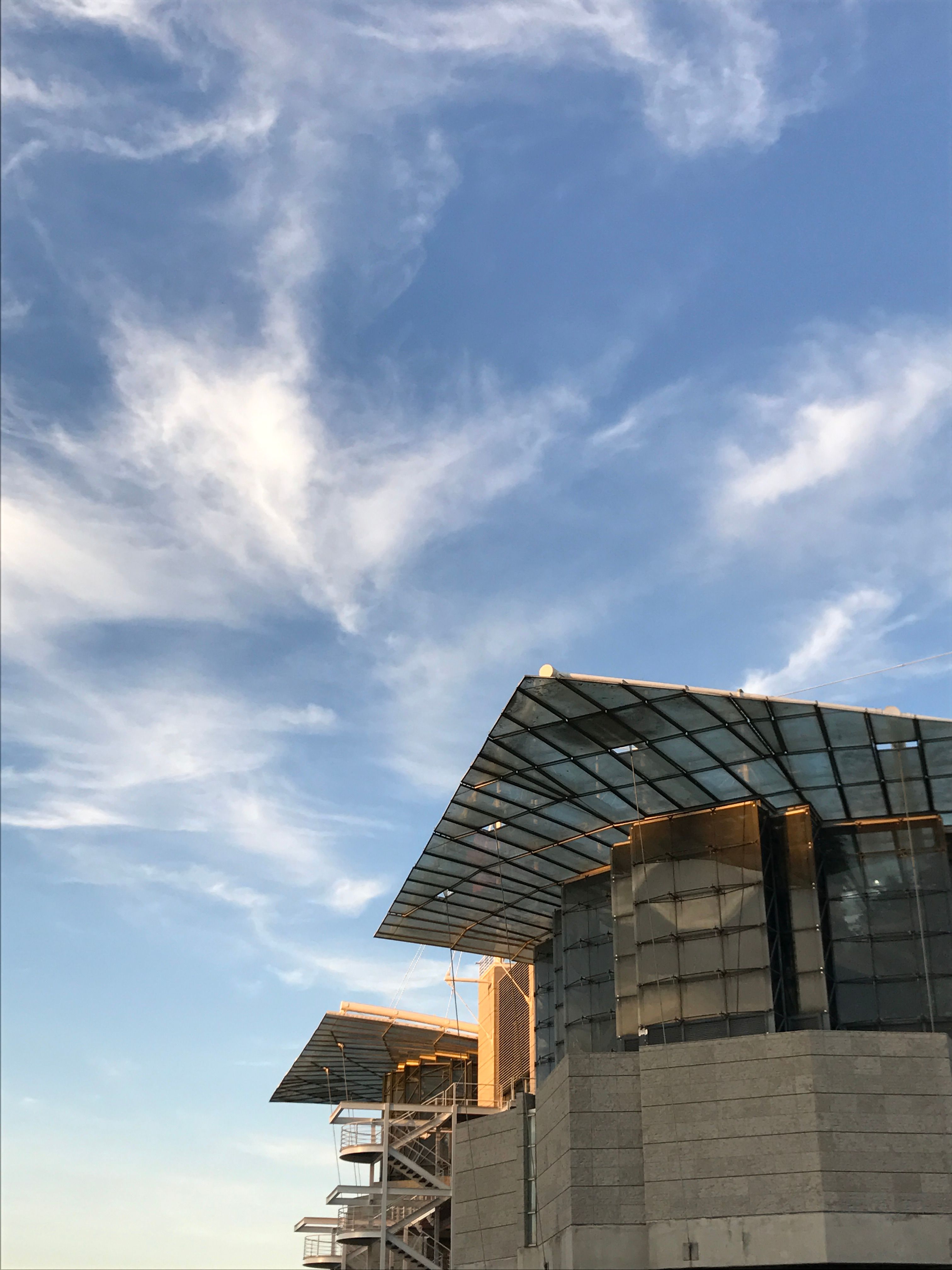 But if castles aren't your thing (it's ok, we can still be friends), then I would seriously urge you to check out the Oceanário de Lisboa. Yes, it's an aquarium. But not just any aquarium! This is the second largest aquarium in Europe and has been rated the best aquarium in the world on TripAdvisor. Trust me, it lives up to the hype. You approach it over a long bridge that connects the aquarium to a waterside park, which gives you plenty of time to admire the Oceanário's architecture (I mean, just look at all that glass. Isn't it pretty?). Inside the aquarium, they have all of the usual aquatic suspects... and the cutest penguins and otters on the planet. My favorite part was actually a temporary exhibit called "Forests Underwater" by Takashi Amano, which looked like a rain forest that had fish swimming through the sky. It was just surreal.

Portugal is such a beautiful country. I hope to go back one day, and if I do, I'll be sure to share the photos on Steemit!

All photos are my original work, so the usual copyright rigamarole applies. For those of you who are curious, these were all taken with an iPhone 7.

photography travel writing steemfest2 life
2년 전 by theowlhours62
$73.21
101 votes
댓글 남기기 24
Authors get paid when people like you upvote their post.If you enjoyed what you read here, create your account today and start earning FREE STEEM!
STEEMKR.COM IS SPONSORED BY

Great photo's! Can i please usem them for my cartoonizing artwork?

Go for it! Please just credit me for the original photo. :)

I posted a cartoonized photo of your Lisbon tram, hope you like it. We are making a cartoon using this style and we will be publishing the first album here on Steemit.

It looks awesome! I'll keep an eye out for your album.

As i told you, we are making a comic series in this cartoonizing style, which we want to publish here on Steemit. It's called Elohibaluk.

I posted a teaser with a few of the first pages. Pls check it out and if you like it, a resteem would be highly appreciated.

On another subject, i just posted a short story i made today and i'm very curious what you think about it.

If it's not too much trouble, could you take a look at it and tell me if it's any good?

Some really nice composition and lightning, would love to visit those places one day!

Man !! All the clicks are made by positioning yourself perfectly . You’ve become pro in the photography. Keep the good work up :)

Thank you so much! 😊

I like your posting and so Beautiful picture.
Nice to meet you @theowlhours.
And please visit my blog too :) WOW Portugal has become one of my favorite countries, thanks for sharing the beauty of this wonderful country, congrats :D

It's looking like the city of 1900's but historical places to watch :)

OMG! nice shot!! how did you take a pic?! your skill is perfect!

My parents are from São Jorge, part of the Açores islands, so I've been there, but never to the mainland. Someday, I will. Your photos are stunning and while I'd heard of the castles, I had not heard of the aquarium! Fascinating! Thanks for sharing!

Beautiful photos,thank you for sharing those with us!

Each of your picture is full of enjoyment that i love to do <3
Your trip was just amazing.

Wow! Those photos are gorgeous!