about a month with the new Pokerstars(.it) rakeback system - rant

This is an update from previous post, I learned a couple of things more about the new system. 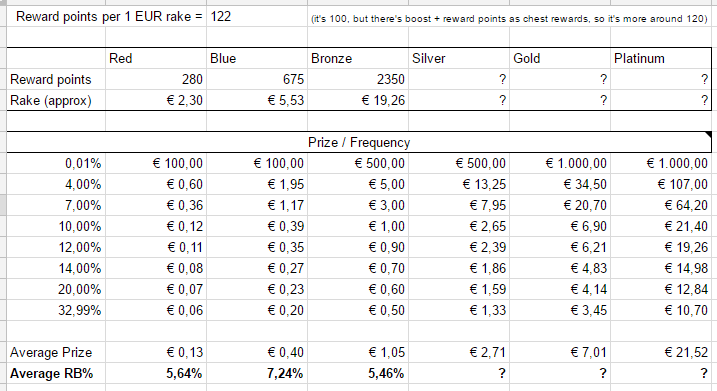 Come on, you give me less rakeback with the bigger chest?!?

As a former Goldstar I used to get around 16% rakeback, but this month is about 7% (and I paid about 400 EUR in rake playing Zoom NL10, NL25, plus a couple of tournaments).

I opened like 7 bronze chests, they gave me an average of 5,6% RB this month, compared to 8,1% of blue chests and 8,3% of red chest. Ok it's just one month of data, but I feel this is wrong on so many levels.

I think the new rakeback system is horrible for poker regulars (I mean people playing hours every day, could be good or bad players).

First of all, they cut (my) RB in half, which is like increasing rake. And from the little I saw, the more you play the less they give you back. They increased variance even more by putting randomness in rake(back), something we already saw with the introduction of spin n go's multiplier. And there's little transparency about how the new system works.

Unfortunately there are no alternatives for me in the italian online poker market (other rooms have very low traffic and/or they lack fast forward tables). So I will keep grind on stars... the day I will not beat the rake anymore, I will stop playing.

poker rakeback rake pokerstars chests
4년 전 by bnoise54
$0.26
9 votes
댓글 남기기 2
Authors get paid when people like you upvote their post.If you enjoyed what you read here, create your account today and start earning FREE STEEM!
STEEMKR.COM IS SPONSORED BY

Sorry to hear that, I m a Hyper Turbo Sit n Go Player , arround 35% of my profit is from RB at the moment , so I think about moving to a other site as soon as they bring this rbsystem to the .eu client . Really sad to follow the development of Pokerstars over the last years .

[...]
Information posted on the Two Plus Two News, Views & Gossip Forum in recent weeks suggests that a significant amount of dedicated online poker players — many of whom have been loyal PokerStars customers for years — will indeed make the move to a competing site as a result of the changes.
Partypoker appears to be the early favorite to capitalize on the shift and has already experienced unseasonal growth since mid-May thanks to its own revamped player rewards system which incentivizes high-volume play, according to Poker Indsutry PRO.
[...]