Constitution Bypassed in Illinois. US Citizens Given 60 Days To Turn In Guns Or Face Being Criminals. Mayor Swayed by High School Students. 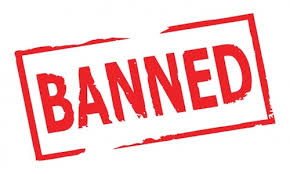 Residents of a town in Illinois were just handed down an unconstitutional decree from their local government, they now have 60 days to give up their guns or be fined up to $1000 per day...

As reported in the following MSM news outlet locally there:

As the state promises gun rights activists they’re not coming for their guns, behind the scenes they’re pleading for it to happen. And now the feared gun grab is occurring. Residents in Deerfield, Illinois have 60 days to surrender their “assault weapons” or face fines of $1000 per day per gun.

The gun ban ordinance was passed on April 2nd with residents left with few choices of how to dispose of their valuable “assault weapons.” Upon careful reading of the ordinance, residents will be left with revolvers, .22 caliber “plinking” rifles, and double barrel shotguns to defend their homes and families from criminals who could care less about the law.

Fines for not disposing of the weapons range from $250 to $1000 per day per gun for those who choose not to comply with the city’s ordinance. While a fine may seem reasonable to some, as TFTP has reported on multiple occasions, failure to pay fines always results in police action. It is not far-fetched to predict major turmoil and arrests in the event of non-compliance.

One example of the so-called “assault weapon” is the Ruger 10/22 which can accept magazines that hold more than 10 rounds. Even though the 10/22 is not listed in the list of guns the village wants to see banned, the gun cannot legally be possessed in the village.

Residents have been instructed to either sell their guns, transfer the ownership to someone who lives outside the village, surrender their guns to Deerfield’s sheriff, or begin paying the fines.

Deerfield mentioned a number of cities where mass shootings took place, including Sutherland Springs, TX where 26 people were killed in the First Baptist Church. That shooting was actually stopped by a man who used the very gun Deerfield voted to ban. No mention was made of that fact in the ordinance.

Even though the village trustees ignored the pleas of residents to leave their guns alone, and passed the ordinance anyway, many residents were encouraged to ignore the gun ban and engage in civil disobedience.

Joel Siegel, a resident of Lincolnwood, warned the village’s residents that governments all across the world have moved to confiscate guns then turned around and ran roughshod over the people. He said,

“There’s an ancient and honored American tradition called disobeying an unjust law…I have urged (people) to listen to their conscience and if so moved do not obey this law.”

Deerfield Mayor Harriet Rosenthal implied the students from the local high school helped sway her decision to bring about the ordinance.

“Enough is enough,” Rosenthal said adding, “Those students are so articulate just like our students. There is no place here for assault weapons.”

The statement mirrors the knee jerk reaction to ban guns following a nationwide public outcry of students who supposedly feared for their own lives following the recent mass shooting in Florida.

Opponents of the gun grab vow to fight the action in court while others praised the trustees decision to ban semiautomatic rifles, pistols and shotguns. Ariella Kharasch, a Deerfield High School senior said she wants more action to be taken on both a local and national level.

Authored by Jack Burns via The Free Thought Project, and shared by ZeroHedge.

politics news freedom life philosophy
3년 전 by barrydutton74
$3.53
44 votes
댓글 남기기 23
Authors get paid when people like you upvote their post.If you enjoyed what you read here, create your account today and start earning FREE STEEM!
STEEMKR.COM IS SPONSORED BY

Everyone is leaving Illinois anyways as the stake is flat broke, so there won't be many people with guns left in that state anyhow.

The USSA in every state is flat broke and so is #Canadastan with 38M people.

Will people finally wake up this crash?

Well, I shared this with our friend @richq11 today as it came up on my Fascistbook memories from 5 yrs ago: 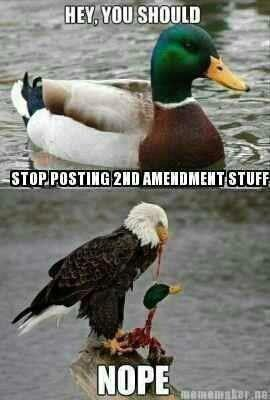 I can see the militias on this, the whole point of your 2A in the USSA is to protect people from this stuff.

This is the most action on this post I have had, I have shared it about twice a week, nobody is discussing this, I could not believe it.

It is kinda like a gov't in #Canadastan taking away our hockey rinks.

"Assault" is an action, not a type of firearm. Every gun is an assault weapon. I keep a .22 in the house for protection (a .22 magnum). Believe me it will stop someone just as effectively as a .45. If you've ever been shot with one you know what I mean. Chicago has the strongest gun laws in the country and the highest per capita murder rate in America. Laws don't stop crime, morals do. What do they think is going to happen, the criminals are going to turn is their guns??? These people are insane (not to mention corrupt). The only reason they want to take guns is because criminals prefer unarmed victims- and that includes political criminals! They're welcome to take mine... as long as they don't mind getting my bullets first!!!

All this chatter with you made me think of the shoebox of hockey cards I have not looked at in years, so I just spent about 30 mins going thru it.

Some stuff you would like in there for sure.

About 1/4 of the collection is Oshawa Generals past and their NHL teams.

Found some Terry O'Reilly cards and a Dave Andreychuk Rookie card and a lot of other cool stuff man.

I've never really looked thru it that much til now.

Always makes me wonder if he took some of the best stuff out before I drove to get it.

I do not keep up to date with all the USSA stuff but this is a pretty recent article, as I knew of one city for sure where you are required to own a gun, unless you are a consc. objector I think -- I did not know there were others.

I remember too that the governor of Vermont introduced legislation for mandatory gun ownership. I don't know if it passed or not!

I honestly thought you were always on the east coast near Boston someplace, so my mind is still blown that you are in Arkansas near your buddy Billy C.

I honestly was against guns in any form, until around 6 yrs ago, when I decided to see WTF all these 2A gun nuts were up to.

.... spent a week doing my own research at nights.

I left Boston in 78 and only went back once to visit. I've lived all over the country, but I love Arkansas, the people here are the best I've found anywhere... that's why I'm here. It feels like home, where I belong and Billy C. doesn't come around here anymore, he's not very popular!

Thanks for LMK back.

I think some of this you may have mentioned to me in the past. Damage to the melon means I am not as sharp as I used to be man.

Every day is a struggle now.

Well, here's a little humor to lighten things up!

I've never seen that one, thanks man!

Along with this theme....

on top of all the legendary damage reports, broken glass from buildings, trees, pictures, and stories out there now....

The Jays game might even be cancelled, due to all the damage around the Rogers Centre/Skydome now, outside and the retractable roof is leaking - there are buckets on the field catching water inside the stadium, I just heard.

They had their last 2 games in Cleveland cancelled due to weather and bad rain in Ohio.

We've never even come close to a game being cancelled here, w the dome, for such a thing, it has been historically now --- really bad here the last 3 days and like you said, we are used to such things.

I believe this is a step in the wrong direction. I would rather see free guns and ammunition given to senior citizens along with a license to kill.

We would finally respect our elders. "Yes sir, gramps, sir. Sure I'll help you with that computer problem." @ironshield

" No grammy, that is a virus SCANNER"

This is poor decision. Exactly the opposite of what needs to happen. Since when do teenagers have the experience and knowledge to dictate laws? (No offense to younger folks, but they have much yet to learn).

Gun violence at schools is a symptom, not the problem. What really needs to be addressed is the underlying school bullying, shunning, rejection, lack of nurturing, and lack of education for emotional intelligence.

Once the guns are gone, (and they won't EVER be). The poorly treated and mentally ill folks that are driven to acting out in violence will just turn to knives, poison, or other methods if the underlying REAL problems are not addressed.

Criminals will always have weapons.

The opposite is what happens. Most shootings are taking place in gun free zones and areas with the strictest gun controls. This is a violation not only of the second amendment but also the eighth which prohibits excessive fines. I am sure I could find others it violates as well, but those two came to mind right away. Massacres occur when people are helpless to defend themselves.