Stuff I Got For Christmas 1975 - VertiBird Air Police

VertiBird was a toy helicopter manufactured by Mattel for 10 years starting in 1971. 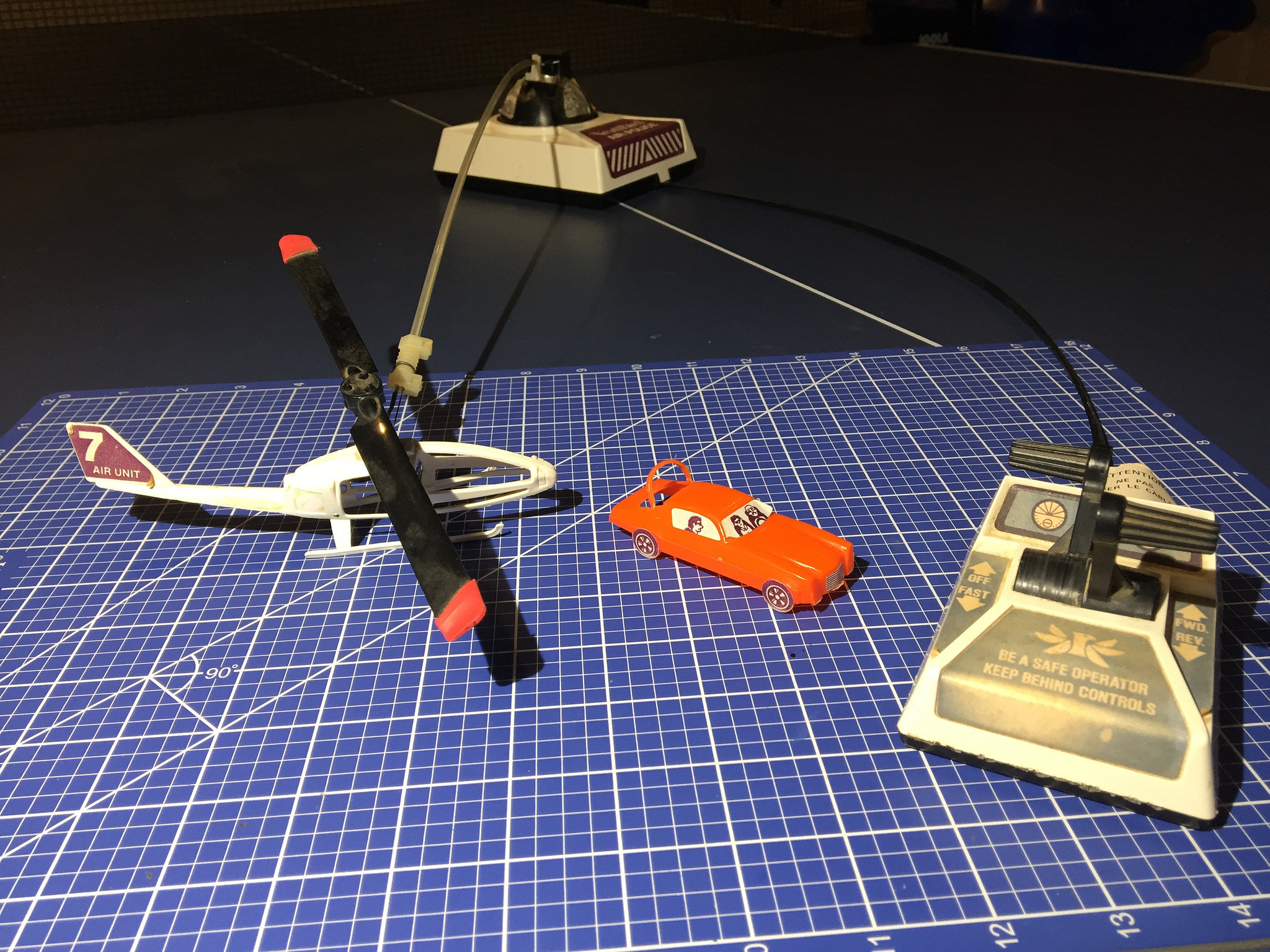 Throttle control simply changed the speed of the blade on the helicopter, thereby providing lift to control altitude. The pitch control tilted the helicopter to make it go forward or backward. This is very similar to how a real helicopter is controlled. The unit was powered by 4 D batteries. 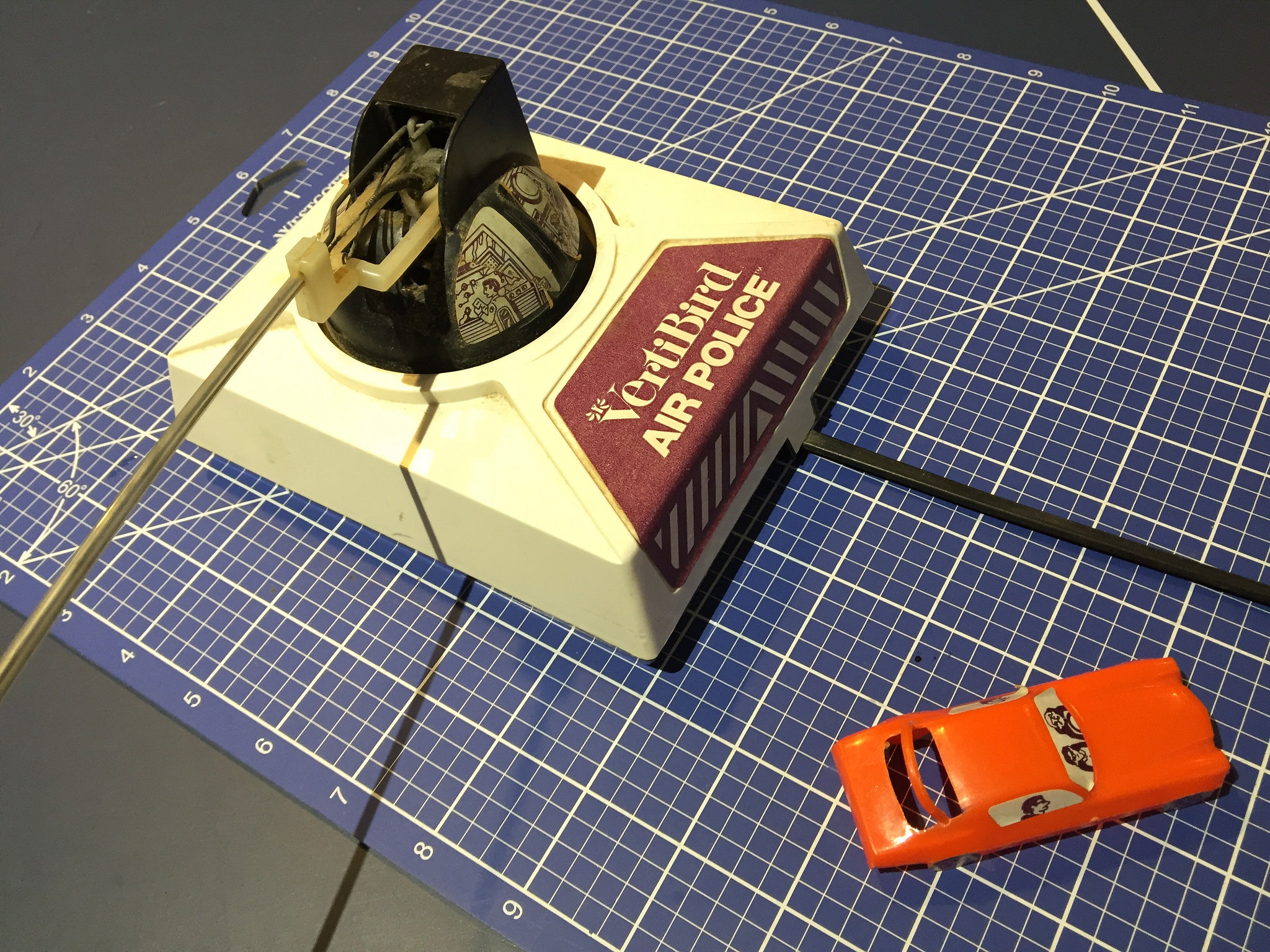 Various versions of the Vertibird were released during its decade-long run. I received the Vertibird Air Police version for Christmas in 1975. Accessories in this version included: a cardboard highway strip, an orange plastic car, and an orange roadblock sign. I seem to have lost the highway and the roadblock sign. Both the car and the roadblock sign could be lifted by the helicopter using a hook that hung from the undercarriage. I fabricated countless other similar accessories myself using cardboard and masking tape. At one point as a child, I modified my Vertibird to be powered by an AC adapter so I wouldn't need to keep changing the batteries.

The Vertibird might have been my all-time favourite childhood toy. I played with it for hours on end. It was so much fun. I still have my original Vertibird. However, it broke around the mid-1980s. I have always had in mind to fix it thinking my own kids might play with it, but it never happened and they grew up so fast. Perhaps, this post will prompt me to finally fix it anyway.

retro christmas games childhood toys
2년 전 by opaulo59
$133.71
32 votes
댓글 남기기 11
Authors get paid when people like you upvote their post.If you enjoyed what you read here, create your account today and start earning FREE STEEM!
STEEMKR.COM IS SPONSORED BY

I don't even know how I got to this post, but it's a really cool retro helicopter!
what is broke in the old one? if it's a part - you might glue it carefully and take it to a 3D printing shop so they print you a brand new and whole one :) if it's metal - it might be a problem, you'll need a CNC machine which is more complicated.

Mechanically, everything is intact and should work. The electric motor in the base station seems to be burned out. It could be replaced. I think this post has motivated me to get it done. Another possibility would be to buy the entire toy on eBay. They are definitely available, but pretty expensive. I'm considering it.

I would try to get the engine fixed - must be cheaper.

Update: I bought a functional Vertibird Air Police on eBay for $125. It's been sitting in the box in my basement for a few weeks. It is comforting just knowing I have it. I'll crack it open one of these days.

I figure when you are thinking about something like this, don't delay. Life is too short. Get 'er done.

Hi, nice of you to remember our conversation and updating me - good to hear you've got a functional one!

your post I have upvote, sorry if my vote does not have a big impact for you, if you want please look into my post @jibox and follow if you want

It's sort of amazing you have all of your stuff still. My parents sold practically all of mine through yard sales over the years, lol. If they had only kept my Sega Genesis and games.