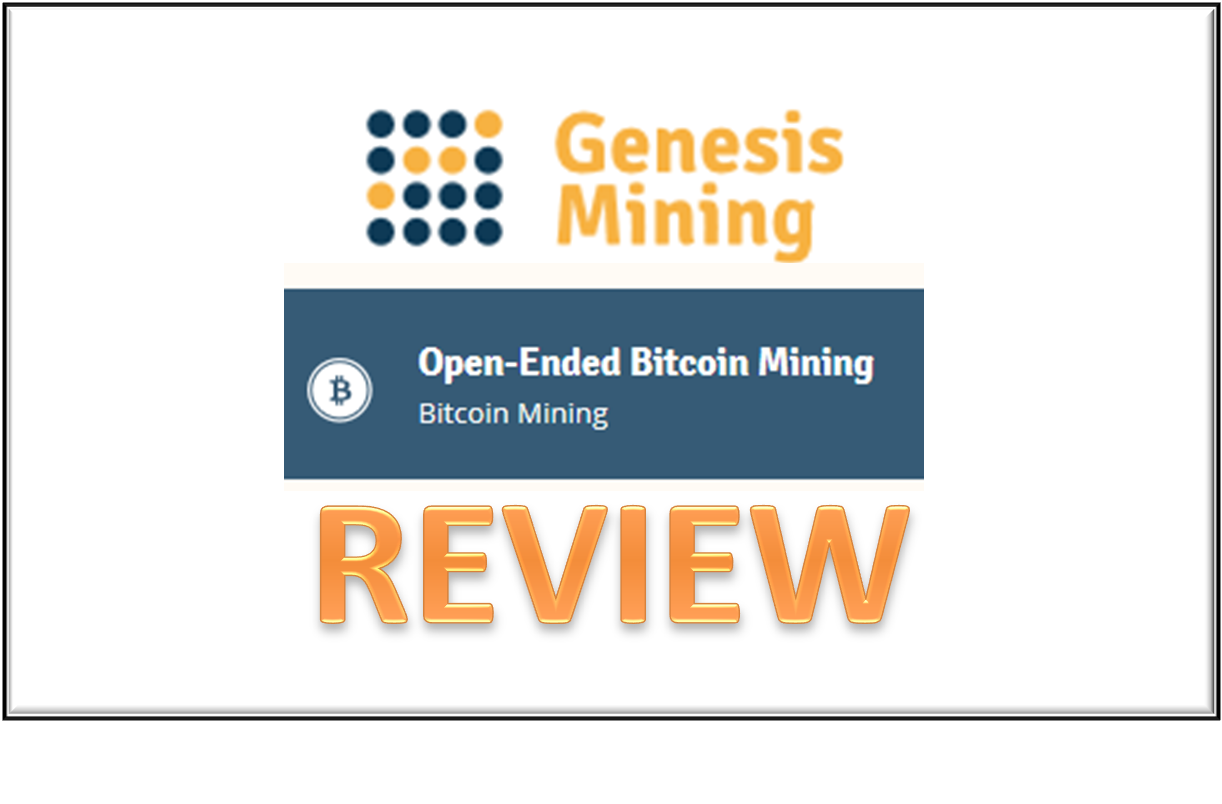 Bitcoin mining will continue until the number of Bitcoins reaches 21 million. It is estimated that the last Bitcoin will be mined in the year 2140.

Bitcoin halving events occur every 210,000 blocks, roughly every four years. The Bitcoin Block Reward Halving Countdown clock currently has the next having occurring in June of 2020.

I was Bitcoin mining during the last Bitcoin halving. Yes, my payout did get cut in half. This is just another factor which may make a mining contract unprofitable. 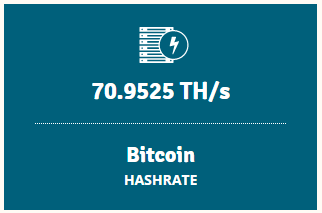 I initially started Bitcoin mining at Genesis Mining with 0.15 TH/s. After about 6 months at this rate to assess the viability and reliability of Genesis Mining, I decided to upgrade my hash rate. I bought a contract to add 10 TH/s to my overall hash rate for mining Bitcoin. A fellow Steemian was kind enough to use my affiliate promotion code, Q1MYO7, for a 3% discount off their upgrade purchase. Their upgrade purchase gave me another 0.01 TH/s of hash power. Since then I have done several more upgrades.

In the following graph I plotted the individual daily payouts with the mean and upper/lower statistical limits (USL/LSL) three standard deviations from the mean. 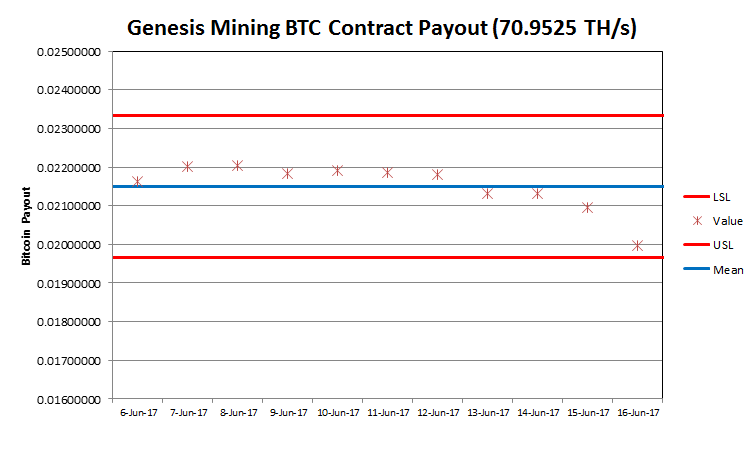 Since 6 June 2017 the Bitcoin mining payout has been relatively consistently staying within the upper/lower statistical limits.

The Bitcoin price and volume during the payout period is in the following chart.

The average daily payout with 70.9525 TH/s is 0.02149782 BTC. Based on my accumulated Bitcoins since I started Bitcoin mining in June 2016 and using the current average daily payout my break even date is 19 February 2018. This is well ahead of the next halving in June of 2020. However, the actual results are likely to vary due the an increase level of mining difficulty. Using the lower statistical limit (LSL) of 0.01966182 BTC per day, the break even date is 15 March 2018.

My Goal for a Daily Income Stream and Return On Investment

I have recieved daily payouts from my Genesis Mining Open Ended Bitcoin mining contract since June 2016. At this time I have exceeded my goal for a daily income stream.

As of today my accumulated payouts from my Genesis Mining Open Ended Bitcoin mining contract since June 2016 is $4,901. The total cost for my Open Ended Bitcoin mining contract is $9,385. Based on my current average daily payout my break even date is 8 September 2017. Again, this is likely to vary with the mining difficulty level and the price of Bitcoin.

Assuming my average daily payout remains constant up through to the next Bitcoin halving in June 2020 (THIS IS A BIG ASSUMPTION), my return on investment is estimated to be 575%. However, I would conservatively hope for a 100% return or slightly more.

Today I upgraded my Genesis Mining hash power again by another 5 TH/s. I will monitor the payouts again to put together another review post.

Based on my experience with cryptocurrency mining contracts here is what I have learned from the school of hard-knocks:

If you are interested in learning more about Genesis Mining then click here to visit their website and use promo code Q1MYO7 for a 3% discount on your first mining contract purchase.

If you have an account at Genesis Mining, you will recieve a 3% discount on your next upgrade using promo code Q1MYO7

You can pay for your mining contracts at Genesis Mining using Credit Card, Bitcoin, Dash, Litecoin, and Dogecoin.

I buy my Bitcoin, Ethereum, and Litecoin through Coinbase. For me, buying them through Coinbase is fast and convenient. Plus, you will get $10 in Bitcoin when you signup at Coinbase using this link and you buy $100 or more of crypto-currency. can you do a review on hashing24

At this time, I am not interested in opening a Hashing24 account. However, here is a video I found that does a payout review:

What's your thoughts on alternative coins like potcoin or cannabiscoin?

I stick with the main coins like Bitcoin, Ethereum, and LiteCoin... and of course STEEM.

There are nearly 800 cryptocurrencies now. I am sure that some of them will do very well. But for right now, I will stick with the ones I own.

Thanks Mike. But let's say that you didnt currently own any coin. With the high cost of the big 3 coins, would you jump on a new coin in a bull market, like Cannabiscoin or Potcoin? Or is it best to just bite the bullet and fork over thousands of dollars for 1 Bitcoin?
Maybe you can recommend a review of up-and-coming cryptocurrencies. Thanks so much!

You don't have to buy a whole Bitcoin. You can buy a portion of a coin down to eight digits. I typically buy Bitcoins at $20 USD at a time.

I did the same for Ethereum and Litecoin last week.

Thanks Mike, do you buy on bocktraders or bittrex or another trader?

I also mine bitcoins and ethereum at genesis mining, your analysis is really great.

Thank you! I know a lot of people have questions about buying mining contracts and I try to share my experience and results. I hope my experience helps people to make a more informed decision or at least gives them more insight for their own research.

Have a great weekend!
Thanks,
Mike

Excellent info. Followed and upvoted. I'm looking to trade codes with someone if your upgrading again anytime soon.

I will be upgrading again when BTC gets close to $3,000 again. I have been trying to leverage BTC to buy the mining contracts.

I have a login for STEEM and I am mining STEEM on Genesis-Mining. How do I get the STEEM wallet address? Thanks - SC

I think your STEEM wallet address is surfcatsteemer. You could e-mail Genesis Mining's customer service with your question.

The other thing you could do is allocate your mining to Bitcoin then send it to the address that you would use to purchase STEEM Power.