global warming: the result of our continuous bad activity

This is an old song that continues to be repeated, but this is the current reality. We are now and our children and grandchildren will be more bear the burden of the consequences of our bad deeds to nature and will continue over and over again if we still ignore it. Climate change, global warming, is a material that is endless to discuss. Just look at how uncertain the current climate. Is this a turbulent influence of nature or is there human influence in it?

There have been many research results that we see with forehead wrinkled and as if hard to believe it. Recent research from NASA shows human actions in relation to climate change have had a very wide impact on natural systems, including melting ice sheets, faster crop blooms in Europe, and declining lake productivity in Africa. The study, conducted by Cynthia Rosenzweig of NASA's Goddard Institute for Space Science in New York and researchers from 10 different institutions, tried to make the physical and biological impacts that have occurred since the 1970s along with rising temperatures throughout that period. As a result, the warming that occurs widely is derived from the impact of human activity throughout the Earth.

This study is the first to study the relationship between existing global temperature data sets, climate model results, and observe the large-scale changes in the physical and biological systems to show the interrelation between human activity, climate, and its impact. The observations show that there is a relationship between human action and climate change and observations of the impact on Earth also shows the same truth on a continental scale, mostly in North America, Europe, and Asia.

To arrive at the conclusion of the relationship, database analysis of more than 29 000 series of data obtained from observations of the impacts that occur in the natural system on Earth. The data were collected from 80 studies in a span of 20 years from 1970 -2004. The impacts observed in this study are changes in physical systems such as glaciers that are dwindling, melting the ice plains, and the warmth of lakes and rivers. Other consequences also occur in biological systems, such as re-emerging leaves and flowers that bloom faster, birds arrive more quickly in periods of migration, as well as plants and animals that move from pole to pole in greater numbers. In aquatic environments such as oceans, lakes, and rivers, plankton and fish also begin to shift from cold adaptation conditions must now be able to adapt to warmer water.

On a global scale, 90% of observations show a consistent change in the physical and biological systems of Earth warming. Another thing, changes in the land that also changed from the use of forest to agriculture was another impact. Ultimately the conclusions can be taken, humans are indeed one important factor in climate change is happening on Earth. This effect occurs through an increase in greenhouse gas emissions, and it happens globally in America, Europe, and Asia. In some continents including Africa, South America, and Australia, documentary results from observations of physical and biological changes are still uncommon with regard to global warming as a result of human activities. More observations and research are needed for the continents to get a more definitive result, as there is less research. Whatever it is let's start with ourselves at least to make the environment around us so much more comfortable to live in.

Storms and cyclones are affected

Good news. storms that have been increasing for the past 35 years may not be there anymore, although some with an average will still emerge. Typhoons will also be increasingly rare in the Atlantic throughout the 21st century if the world continues to get warmer. This is the result of research on the linkages of global warming is affecting the intensity and frequency of the hurricane.

Globally the number of major hurricanes has risen dramatically by 75% since 1970. And although to date the main suspect for the increase is increasing ocean temperatures, unfortunately, the relationship between the two continues to be a contested issue. Why is global warming a suspect? Apparently, the problem is, the hurricane can only form when the sea surface temperature exceeds 26 degrees Celsius.

In the study, Thomas Knutson of the US National Oceanic and Atmospheric Administration (NOAA) and his colleagues used a regional climate model from a pool in the Atlantic (an area in the Atlantic) to simulate observations of hurricanes in 1980 and 2006. Observations used are sea surface temperatures and atmospheric conditions. In a study conducted, Thomas Knutson et al did not include the notion and opinion that the increase in greenhouse gases also led to an increase in the frequency of tropical storms.

In this study, Knutson et al used two models to estimate whether hurricane activity will continue to increase in certain areas as a result of human actions that cause climate change. The first model assumes climate warming of 2.8 degrees Celsius until 2100 and other models do not include the heating. In general, the number of hurricanes will decrease. And with a weak storm, the consequences are still quite large. It is estimated that tropical storms will fall by about 27%, 18% of which are tornadoes and another 8% of major hurricanes. 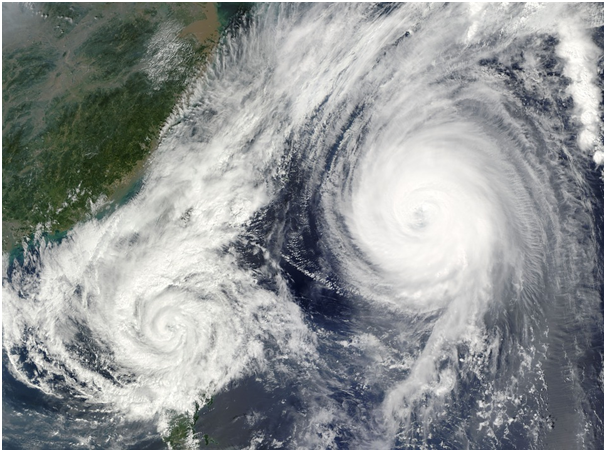 So by not ignoring the fact that hurricane activity has increased dramatically over the last 35 years, this trend will not continue until the end of the century under the influence of warming conditions. However, according to Isaac Held of NOAA, "we can not extrapolate the last 35-year trend for the future."
In addition to studying changes in the number of hurricanes, the study also focuses on projecting climate shifts. Perigean in question is the intensity of storms and heavy rain. This is largely seen in the work of Kerry Emanuel, a hurricane expert at Massachusetts Institute of Technology, Cambridge. Kerry uses a variety of models to show the effect of global warming on the decline in the number of hurricanes globally. But on the other hand, it also shows that hurricanes become more intense in some locations.

The Size Is Influential

Kevin Trenberth, a climatologist at the National Center for Atmospheric Research in Boulder, Colorado, though not involved in the study, agreed with the findings. But Kevin also questioned why Thomas et al actually underestimated the increase in hurricanes and storms are very large. This refers to the fact that the model used is still a low resolution that has not been able to account for changes in some very large events. For Kevin, in a climate issue like this, it's not the amount that matters. It should also be taken into account the issue of intensity, duration, and size. In the beginning, the good news is that there will be a decrease in the number of storms and hurricanes. But unfortunately the news cannot be a good thing for us because of the results of these studies bad news shows global warming continues, climate shifts will continue, and the storms that occur despite the decreasing, it turns out the intensity, duration, and size may be very large.

science steemstem education steemiteducation globalwarming
3년 전 by irza53
$0.43
9 votes
댓글 남기기 3
Authors get paid when people like you upvote their post.If you enjoyed what you read here, create your account today and start earning FREE STEEM!
STEEMKR.COM IS SPONSORED BY

We have too take care of our planet if we want to leave a legacy, I actual want to have grandchildren that inherit the earth and rake care of it.

Thanks for posting your thoughts

we hope everyone starts thinking about what should be passed on to future generations :)

The question should not be: "Can science definitively prove that fossil fuel burning is causing global warming?".

Instead the question should be: "Can you prove that fossil fuel burning is completely benign?"

If I held out a pill and said to you "Take this pill." your first questions would be "What is it? Is it safe?"

That is the attitude we need to take to all the coal and oil burning.