Dust is not foreign to us and many we find around us, as there are at home that it is very disturbing especially for those who suffer from allergies, it wants to far away and does not want to get closer. But the dust also has its own story, do you know in the sky there dust floated in space, surprised?

It turns out that in space there are factories, factories? Not a factory like the one on earth, man! When scientists examine the stellar explosion, they discover something like molecules, molecules, and dust. The experts say that they found a dust factory, confused how there is dust there?

Usually, dust exists like in our room due to the long time we do not clean. And like that also in space. The age of the universe is about 13.8 billion years old. So naturally, there is dust everywhere in the universe.

The dust that scientists see in outer space is very different from the dust we encounter around us here attached to something like things. Here people can bathe with dust let alone in outer space there, I can not imagine. Dust in space is also called cosmic dust. The size of this cosmic dust is very small than one strand of your hair, and this part of the dust is composed of very small particles. The size of cosmic dust can reach 0.1 μm in some molecules. Scientists say that among the stars in the sky there is cosmic dust.

The dark-looking universe is also caused by the dust that is scattered, and we can not freely see the heavenly bodies. Even the dust can block something we will observe and also can close the light from objects that shine in the sky, nor do you forget to have a telescope to see it. Artist’s impression of dust formation around a supernova explosion,wikipedia

What's interesting about this dust, it turns out this dust can shine you know! But you have to use a special camera equipped with infrared light as used by astronomers.

Who else is lucky? We!

You know that dust is an important component in outer space? The planet, man, stars and many others are made up of dust. Particles composed of two elements and even more so-called molecules, these molecules can be found among the stars with other materials such as cosmic dust.

The phenomenon of the destruction of dust in space occurs when the star explodes, the explosion will not be able to imagine. When a star explodes with a powerful explosion, very strong and its rays even beat the other star rays, have you ever watched the supernova how?

So when scientists investigate the phenomenon of exploding a star, they are really very surprised by what has been seen because in the rest of the space explosion it found many molecules and also dust.

After being investigated the remains of the exploding star turned out to contain many molecules and also dust, so this discovery is so shocking to the scientists.

Supernova 1987A is the exploding star, the incident occurred 30 years ago. Has a very long distance, about 163 thousand light years. The explosion occurred in the environment on the Magellan cloud, more precisely in the Tarantula Nebula. There are two new molecules found namely, formyl molecules (HCO +) and sulfur monoxide (SO). In addition, astronomers also found two other molecules namely carbon monoxide (CO) and silicon oxide (SiO).

The place most often found the dust factory is in the star-birth trough, interesting, is not it? Very interesting! This means that the star to be born again comes from a dead massive star.

So we see there that dead stars can still help to form new stars, interesting, is not it! we like to see the dust that gave birth to the bird Phoenix, very beautiful !!!

see a bright color game in the sky

Do not underestimate dust in outer space there, dust there is not the same dust we find on earth that we think is not useful. Because stars in space are created from flying dust. 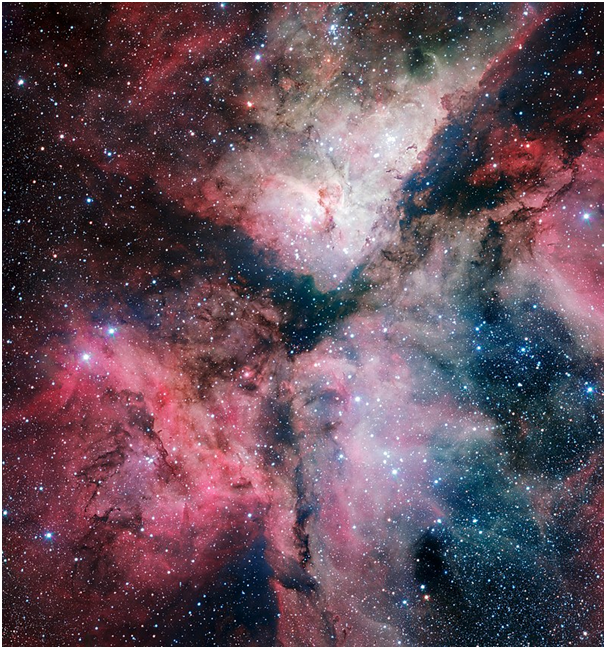 Dust on the Carina Nebula that forms a new star,wikipedia

We will never see a star without the presence of dust, and dust that is also seen as a star maker's fuel. Stars are born if enough material is in the star formation zone. This is where the dust grains make a very important contribution in forming a new star. This place in the Carina Nebula if dust and gas are combined it will weigh about 140000 times the Sun!

In the next few million years, many stars will be born, because there are many dense areas in the Carina Nebula. And the massive stars found in the Nebula will be able to help push gas and gas particles to unite.

Like cotton and paper that will fly blown by the wind, as it will also happen when the gathering of matter due to the wind blowing from a massive star. Supernova is known as a very powerful stellar explosion of a massive star destroying itself. When a supernova explosion occurs, the material will get help to get together quickly and a new star can start!

Our parent star is the sun that is near planets in the solar system. As we know all along that the star is always near the planet because the planet is formed around the star. However, astronomers now find clues that other objects may be forming their own planet. This means the number of Earth-like planets in the universe is more than we can imagine.

There will be a lot of residual dust and gas that will form like a disk that will widen the newborn star, just as we see a ring that surrounds the planet Saturn. Sometimes there are also many grains of dust coming from the rock formed in the disk. Over time it will form a very large chunk that comes from a lot of dust grains that had previously joined between them and cling tightly, then the planet will be the process of formation.

And there is also an object that is neither a star nor a planet around a brown dwarf that is present with a dispersed granule in solid form on a gas disk, an additional job for astronomers. We should also know that sometimes there are failed stars, also called brown dwarfs. The magnitude of even reaching 80 times the mass of Jupiter (the largest planet arranged solar) this object is not a planet because it is very, very large. However, the white dwarf is too small to start burning hydrogen in its core so it does not shine as brightly as the star.

Astronomers do not expect to find dust grains around brown dwarfs for several reasons. The main reason is that the disk around the brown dwarf does not contain much material, so it is unlikely that the particles will collide with each other and merge into larger objects. However, their allegations turned out to be wrong, the dust grains were indeed around the brown dwarf. In fact, it is possible that in some instances the grains have grown into rock planets, so we are likely to find another planet as big as Earth in the larger space.

With the dim light dyed brown will not shine as bright as a star. The compressed material inside the brown dwarf stomach is due to a continuous gravitational drive. With the incident, the brown dwarf heats up which eventually causes it to glow reddish.

Like the legend of the Phoenix (you should see the Harry Potter film), a number of planet Earth are found emerging from the dust of a pair of stars that have run out of fuel. Many light years away from our Solar System. 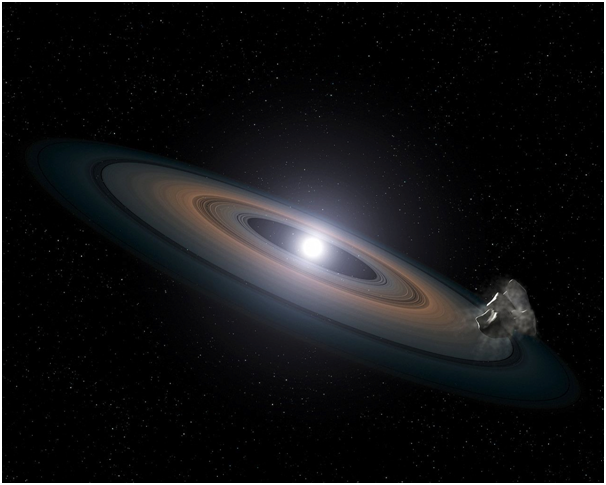 Splinters around the white dwarfs that make up the ring.,wikipedia

Like the stories of magical beings, they are known as 'white dwarfs'. Both are small and dim and are the remains of stars that used to be like our sun. These white dwarfs live in a young star cluster. Prior to this discovery, the search for planets in star clusters did not work. About 800 planets have been detected outside our Solar System and called 'exoplanets'. Of all the alien planets, only four planets are found around this newly discovered star-like star member.

However, that does not mean that the planet does not form in the star cluster. It's just that finding a small and dim planet is not easy. The star group we are talking about is young and very active and radiates enormous energy that can obscure the cluster's delicate details. In relatively calm clusters, finding a planet that is circling a star is like trying to see fireflies between fireworks.

The material that has turned into dust then forms a ring that surrounds the white dwarf stars. This image illustrates this. Inside the disks, rock dust will collide with each other, forming larger and larger boulders, until finally a new planet is born.

The possibilities are very small indeed, but it is possible that the signs of life could be present on the planet that circled the white dwarf. And, the planet must be very close to the star to keep warm for liquid water. This is because the fuel in the white dwarf is exhausted and the nuclear reaction, which creates heat that makes stars shine, no longer takes place at its core.

The mystery is not always a mystery

13.8 billion years ago, the most important event occurred: the universe appeared in a big bang, Big Bang.

In the early days after the Big Bang, the universe was very hot and foggy. In millionths of a second, the universe cools and creates the right conditions for elemental formation.

Nearly 400,000 years later, helium and hydrogen first formed. The two elements are still the largest element in the universe. 1.6 million years later, gravity began to play a role in the formation of stars and galaxies of the gas clouds.

Since then, all the heavier elements, such as carbon, oxygen, and iron, have been produced in star centers. The elements are then thrown into the universe when the stars are doomed. These elements also constitute our bodies.

What remains unclear until now is how these elements can gather together to form cosmic dust bits undisturbed by the cruel environment in which the grain is formed. Now, we are one step ahead to find out why. Astronomers have investigated SN2010jl supernovae, for the first time they successfully measured heavy elements that coalesce into cosmic dust grains just weeks after the supernova's massive explosion took place. Not only that, the dust grains are also the biggest and strongest grains we have ever seen!

The soot from the candlelight is very similar to cosmic dust, only the sooty grain is 10 times larger, even larger, than the cosmic dust. thanks

science steemstem astronomy life steemiteducation
3년 전 by irza53
$0.04
4 votes
댓글 남기기 0
Authors get paid when people like you upvote their post.If you enjoyed what you read here, create your account today and start earning FREE STEEM!
STEEMKR.COM IS SPONSORED BY