The Scattered Debris That Makes the Planet

The millions of asteroids in our solar system that have formed planets from their debris some 4.6 billion years ago also move around the sun, so not only the 8 planets we know are moving around the sun.

Asteroids in the Main Belt.,wikimedia

There is an area in the solar system that contains small stones of various sizes available, the area is called Main Belt of Asteroids. Here is available a variety of sizes from the size of 1000 km to the rock size of a dust grain. Asteroid stones are also found around the sun from the Earth's inner orbit until they are found on the outside of the planet's orbit Jupiter, so not only in the Main Belt of Asteroids we know.

The relative masses of the twelve largest asteroids known.wikipedia

1801 is the year of discovery of the first asteroid that Ceres discovered by Piazzi, then the asteroid is classified as a planet by astronomers. In vision by Piazzi ceres the asteroid looks rather unlike the round disk like the planet in general. It's the same as Vesta, Pallas, and Juno. Because of the smaller size of a planet we know that the planets are round and the asteroid rocks have irregular shapes, that's the conclusion of the observers.

Another question arises. Are these little objects found between Mars and Jupiter these are the ruins of a ruined planet? If it is a devastated planet, how big are these things? These questions arose in the 18th century when the new telescope was nearly 200 years old.

Then a question, a long-standing question. The question has emerged since 200 years after the discovery of the telescope around the 18th century. So when the discovery of debris around the planet Jupiter and Mars, whether the debris is a planet that has been destroyed? The scientists need an answer to the question. The question remains a mystery as to whether the planet has been destroyed?

Small objects in the Solar System that we know as asteroids are thought to be formed from planetesimal, just like the planets of the earth. But, these planetesimals never made it into a planet. The rest of the debris that failed to join the planet is what we know as an asteroid. In the main asteroid belt, Jupiter's gravity is so strong that it causes the failure of the planetary formation between Mars and Jupiter. 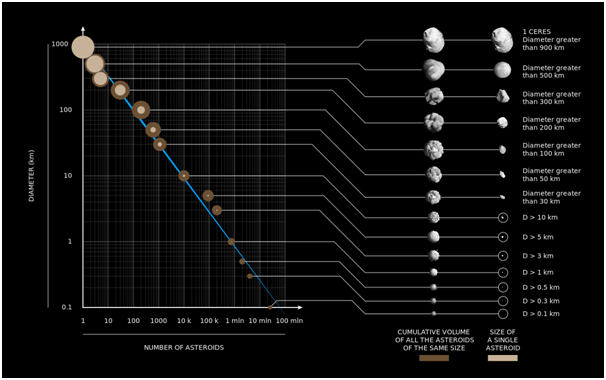 The asteroids of the Solar System, categorized by size and number,wikipedia

Collisions that occurred in the past and now, slowly breaking the rocks of the asteroids become smaller. The remaining dust grains are also eventually destroyed by radiation. Although the vast majority of the remains of planetary formation are irregularly sized, Ceres, the largest asteroid in the Asteroid Belt, is large enough to have gravity large enough to maintain a round shape. However, since 2006, Ceres's status is no longer an asteroid but a dwarf planet. And since then, the largest asteroid in the Main Belt is Vesta.

The remaining debris of planetary formation can be found also in freezing conditions outside the orbit of Neptune. It's just that his name is also different.

The new telescope was discovered in 1608 and was used by Galileo for the observation of celestial bodies in 1609. Though the 200 years passed, its development is of course not what it is today. Even the problem of chromatic aberration on a new telescope was solved 71 years earlier by Chester Moore Hall. Newton also made a reflector telescope in 1668 to address the problem of chromatic aberration.

In 1894, US astronomer E. E. Barnard calculated to obtain the size of the discovered asteroids such as Ceres, Juno, Pallas, and Vesta, with an Lck 91 cm refractor telescope at Mt. Hamilton, California. The result, Vesta is initially the largest estimate is just 439 km while Ceres is even larger that is 964 km. Pallas is known to measure 381 km.

But, it is not easy to know the size of these small objects directly. One of the important information needed to know the size of the asteroid is the absolute magnitude and albedo. The absolute magnitude of the asteroid is the brightness of the small object when placed at a distance of 1 AU from Earth and 1 AU from the Sun. While albedo is the ability of objects in reflecting light.

For asteroids with 100% albedo, it means that the small object is very bright because it reflects the entire light received. If albedo is 0%, there is no reflected light, and the detected object is very dark. Most of the primitive asteroids are very dark because they reflect only a small amount of light received. Asteroid albedo can be known from the temperature of the object or it could be from the received spectrum.

Most of the earth or meteorite rocks are known to contain silicate minerals such as feldspar, olivine, peroxin, and phyllosilicates that resemble different types of clays.

In 1975, Clark R. Chapman, David Morrison, and Ben Zellner divided the asteroids based on compositions in 3 categories, the C-type, the S-type and the U-type. The division is done after they see the pattern of the 110 asteroid spectrum that has been calculated diameter and albedo. This classification continues to grow and to date, we recognize several categories of asteroids based on their composition. 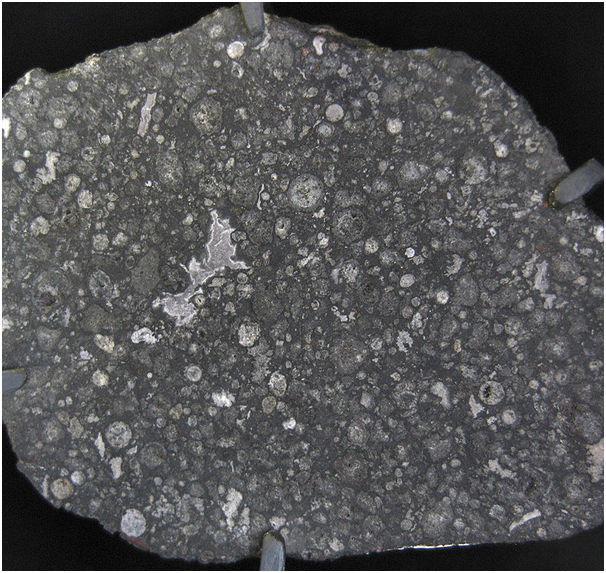 A slice from the 4.5-billion-year-old Allende meteorite. This rock was formed along with the solar system.( Carbonaceous chondrite),wikipedia

Type-C is a grayish carbonaceous asteroid (carbon). This type of asteroid is dark because it has low albedo and has no specific features in the spectrum. Temperature is also low and only experienced low heating. Or even never experienced warming up. This C-type asteroid is the most common and is thought to have a composition of clay and silicate rocks. In the main asteroid belt, the C-type occupies the outermost region of the belt.

The second most common type of asteroid is the S-type or Stony asteroid (rock). Asteroid silicate is bright enough reddish green with moderate albedo. The S-type has 17% of the population of all asteroids and dominates the area within the Main Belt. Its main composition, silicate material, and nickel-iron.

The other type is the E-type, an asteroid with a very high albedo and looks very bright. In addition, there are asteroids type D and type P which amounts to about 5 - 10% of all the asteroids. These D and P types are asteroids that are darker and redder than S-type asteroids and much more primitive than C-type carbonaceous asteroids. Both are suspected to contain organic compounds formed due to space weather.

Interesting compositions can also be found on V-type asteroids that have a high albedo and shrouded in volcanic kernel from basalt material. An example is an asteroid Vesta. The other type is a W-type asteroid that has hydration.

Asteroid from its Orbit

Asteroid Belt and Trojan is the location of the existence of asteroids in the Main Belt and Lagrangian point Jupiter.wikimedia

In the Solar System, asteroids occupy an area between Mars and Jupiter that we know as the Main Belt of Asteroids. In this area, there are 1.1 to 1.9 million asteroids larger than 1 km and there are still millions of much smaller asteroids.

Outside of the main asteroid belt, we can find similar small objects sharing orbits with large planets like Jupiter, Neptune, Mars, and Earth, but not colliding with the planets. The asteroid known as a trojan is located in two special locations known as the Lagrangian point. In this area, the gravity of the Sun and Jupiter create stability.

There are also asteroids wandering around the sun from near the Earth. Near Earth asteroids less than 1.3 AU. These objects surround the sun with orbits that cut Earth's orbit. Until 2017, more than 16294 recorded asteroids near Earth have been discovered and 1786 of them are potentially harmful to Earth. 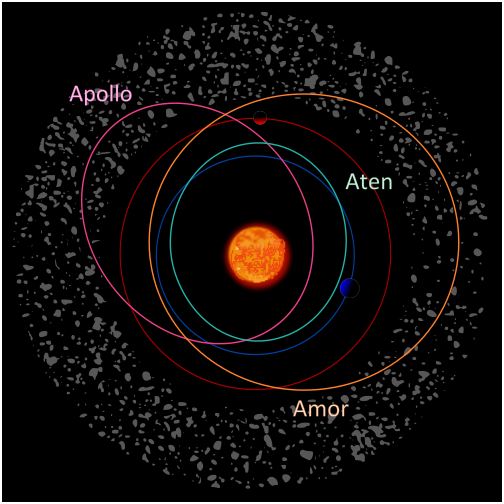 Most of these asteroids are harmless. But the close exposure between the asteroids and the Earth remains under observation since a slight disturbance could alter the orbit of an asteroid that could endanger Earth.

science steemstem space astronomy education
3년 전 by irza53
$2.33
152 votes
댓글 남기기 13
Authors get paid when people like you upvote their post.If you enjoyed what you read here, create your account today and start earning FREE STEEM!
STEEMKR.COM IS SPONSORED BY

Hi @irza
We have selected your post as post of the day for our DaVinci Times. Our goal is to help the scientific community of Steemit, and even if our vote is still small we hope to grow in quickly! You will soon receive our sincere upvote! If you are interested in science follow us sto learn more about our project.

Immagine CC0 Creative Commons, si ringrazia @mrazura per il logo ITASTEM.
CLICK HERE AND VOTE FOR DAVINCI.WITNESS
Keep in mind that for organizational reasons it’s necessary to use the “steemstem” and “davinci-times” tags to be voted again.
Greetings from @davinci.witness and the itaSTEM team.
$0.54
3 votes
댓글 남기기
·
[-]
irza53  ·  3년 전

happy to hear that you like it, in the future, I try to follow your instructions.
Thank you for your time...

Good idea with this article, I wanted to do something similar a while ago but I didn't have the time and then I started covering something else.
There are many theories but we might never know for sure is there was a planet before in the debris field.

I would also link the images so when they are clicked they are maximized. You can still do it by using the licence, but it's more user friendly.

my writing idea came up suddenly, maybe you think of it earlier than me but I first raised it hahaha ... joking
your articles are still interesting to follow
I will fix it in front of it, thank you very much for you ...

Enjoyed the article, learned a lot. Was surprised to read that all the asteroids in the main belt combined are only 4% of the moon's mass. Even including Ceres and Vesta?

yes including all the asteroids combined in the belt. it turns out I just know that the moon like "monsters" large, asteroids in the belt is very small nothing in our month appeal. thanks

I guess the moon is bigger than I thought:)

I upvoted your contribution because to my mind your post is at least 25 SBD worth and should receive 114 votes. It's now up to the lovely Steemit community to make this come true.

thank you, hope your day is also more fun ;D

I am also wondering about the different possibilities behind the formation of the asteroid belts. If I remember well, many options are possible and there is very little means to disentangle them. But my memory may fail here ;)

I just found out about the various asteroids in the belt. of course, there are many possibilities.
I'm sure you know more than me;)

I am not that sure. This is a bit far from my domain of expertise ;)