How we detect 'Black Holes'

Most of us probably have heard the term 'Black Hole' before, either through one of the many favourites in the SCI-FI genre, or through physics comedies such as 'The Big Bang Theory', however interestingly enough what you all probably think you know about a 'Black Hole' Is wrong. 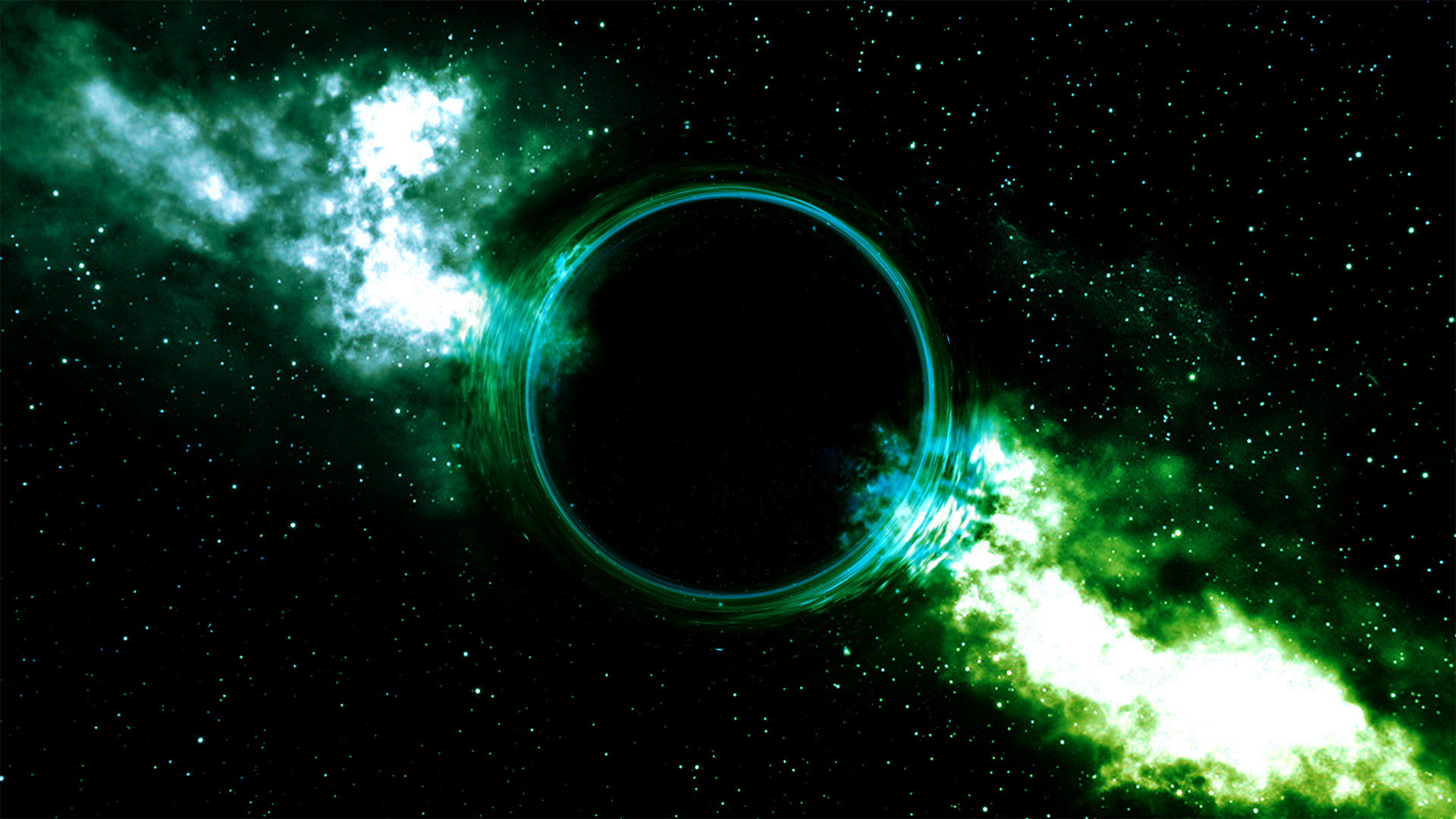 Take this image above for example, now this is probably one of the closest images I could find to explain how whilst you can get some things 'right' about your understanding of Black Holes, there are still incredibly strong misconceptions that need to be addressed and in explaining how we detect them will allow you to understand explicitly what a Black Hole is (more or less).

Well first of all Black Holes are not really 'Black', in fact to actually visibly see a color would require an object to be in some way partially opaque and to actually interact with light in scattering and refraction, a Black Hole causes such a strong curvature in space time (as the singularity, which is the 'center' of the Black Hole has a density diverging to infinity as it's volume approaches 'infinitesimally' small with a large mass), the gravitational force between the singularity and the 'Boundary' ( commonly called the 'Event Horizon') is strong enough such that even light which travels at about 300 million meters per second cannot escape! The image above shows a large black circle with nothing inside, which is contrary to what we actually observe, in fact we cannot directly observe Black Holes we can only observe their affect on Space-Time around them (Macroscopic or 'Strong' Gravitational Lensing) and the X-Ray radiation emitted by heated materials falling into them.

Whilst the image above has the 'Newton rings' sort of correct around the Black Hole, due to gravitational lensing we would still see the light from stars behind the black hole as being in front of the Black Hole and hence we should not see an seemingly 'Empty Black Circle' as depicted in the image.

So what do we observe then, and how can we determine if this is caused by a 'Black Hole'?

What we observe is something that more or less looks similar to this:

The two individual stars are shown on the left part of the image and are observed by the Hubble telescope to be further apart, the right part of the image is the affect caused by Gravitational lensing (as a result of a strong gravitational field warping space-time) and observed by it's microlensing affects which cause a shift in angle and intensity of the lensed stars, this intensity and angular shift are both observed and due to the relative intensity gain (and the fact that there were no perturbations of the intensity peak) we would conclude that this affect would be caused by a Black Hole, as if it were caused by any other object such as a planet, or star the affect would be weaker and would cause spectral lines / perturbations to arise in our measured intensity. 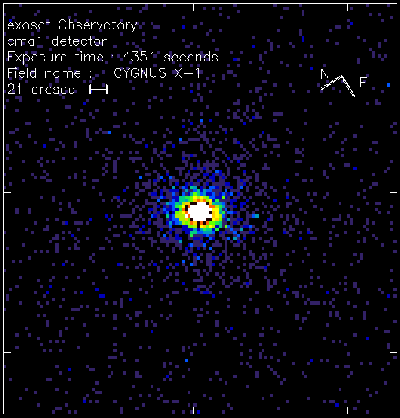 This is an 'image' taken with CCD cameras which shows the immense X-Ray radiation emitted by matter falling into a Black Hole. X-Ray Telescopes and Spectroscopy are used in order to discern the approximate size and locations of Black Holes once they are discovered through Gravitational Microlensing. A recorded 'Spectral Wind' Event is of quite some interest as it details their methods of spectroscopy and what types of spectral lines are commonly observed, this can be found in full Here. The observed Spectra from this event is also below;

This spectra is measured in the X-Ray and is completely different to the Intensity measurement of the Gravitational microlensing as before. We can see from the image that there are significant amounts of spectral lines and perturbations, this is due to the sheer amount of radiation emitted in the different wavelengths of what we call 'X-Ray'; which in itself is really a wavelength range between 0.1 and 10 nano meters.

Well that just about sums up this article, I hope that you found it interesting more or less to discover how we actually 'detect' something we cannot in itself observe. Black Holes are an incredibly interesting 'thing' as a lot of the 'Laws of Physics' as we know them break down at the singularity, However many physicists have a few theories about how Quantum information and Relativity 'may' work in a Black Hole, for example Hawking Radiation where information is conserved as being emitted and 'scrambled/encrypted', unfortunately it's one of those things where the idea of the 'nature of infinity' makes everything a whole lot more complicated, and I will leave you with a question;

If I have a boat of infinite length in 3 dimensions, and I fill this boat half way with water, How much water is in the boat?

science physics technology steemstem education
3년 전 by locikll55
$35.88
71 votes
댓글 남기기 20
Authors get paid when people like you upvote their post.If you enjoyed what you read here, create your account today and start earning FREE STEEM!
STEEMKR.COM IS SPONSORED BY

Amazingly enough, I have read somewhere that sonic black holes where reproduced in laboratories and Hawking radiation were observed. I am just too lazy at the moment to find the references back (but I am sure google will help :p )

I just spoke with a colleague of mine who was actually involved in a project of creating sonic Black Holes using BEC a few years ago, It's really interesting stuff

I think there are actually reproducing sonic white fountains instead of black holes, but my memory fails here. (It was a day where I attended 10 short seminars of 30 minutes in a row... This I remember...)

Question is wrong. You'd never be able to fill it half way =P

Reply to this comment if you accept, and are willing to let us promote your gem of a post!

If you accept this, you'll be nominated and the members of the OCD team will vote on whether we'll feature your post in our next compilation post.

I'm mostly curating in #science and am always glad to see quality posts like yours peeking out between the garbage and plagiarism!

Thank you very much, I am glad you enjoyed it :) I absolutely accept. I completely agree, garbage posts and plagiarism are becoming a huge prevalence on Steem (I also curate in #science #technology for Curie), and it definitely is annoying the amount of garbage we have to go through to find quality content on the platform. I always love the feeling when I find quality content where everything is sourced nicely and has a great flow, anyway this is going on a bit of a tangent now :P, Thank you for reading and nominating me for @ocd

I've seen you in the steemSTEM channel so I had great hopes when I saw and clicked your post :P

It's always fascinating to consider the differences between how we understand complex phenomena and how they actually are. (Or more accurately, how a layman understands a phenomena in broad terms and how an expert understands it in much greater detail - but still doesn't necessarily, completely comprehend it.)

Consider how a young child understands a car. A shiny box on wheels, with one pedal to make it go, another to make it stop, and a steering wheel. A mechanic would say, "not really, you've also got this engine and these brakes and this steering system." And then a physicist could go into detail about the laws of thermodynamics and how heat and pressure drives the pistons.

No particular interpretation is "wrong," but there's a real devil in the details.

No worries, thank you for reading :) I hope you enjoyed it

Dark energy is just the difference in energy caused by the expansion of the universe, which we observe with telescopes by objects getting further away from us over time (a great analogy by Brian Cox is that if you put a raw bun (dough) with sesame seeds in the oven, as it expands the sesame seeds will become further apart, this is an analogue to what happens to galaxies, star systems, even planets to a much smaller degree as the universe expands.

Dark Matter is also observed through it's Gravitational Lensing affects and the affect of Dark Matter-Matter annihilations on the cosmic microwave background.

All in all, sometimes it can be difficult to imagine these things, and you could even be right, there might be no such thing and what we observe could be a completely different phenomenon, but as of right now our observations of the X-Ray background and the lensing effects have no other reasonable scientific explanation and until we have the capability to directly measure their affects on objects we are stuck half-way between hypothesis and theory :P

I've read all of the explanations.
I don't buy it...
I'm not convinced that the Universe is expanding....
just because there is 'no reasonable explanation' doesn't mean the current explanation is correct.
It just means there is a failure of imagination.

Watch out he might flag your stuff if you prove him wrong.

Interesting topic. I have always been intrigued by this topic

UPVOTED.
very good.
I would be happy if you like to follow me and give your opinion about my posts.
Thanks.