Picture of The Day: The Cloned Children of The Clone

The first cloned animal Dolly (sheep) has lived for 6 years, instead of the normal 10-12 years for a sheep of her breed. However, science is moving forward, and 9 years after Dolly, the world saw the first cloned dog- Snuppy.

Puppy breed Afghan Greyhound was born from a cell taken from the ear of the original. During the life of Snuppy were not observed any deviations and in 2015 he died at the age of 10 years old. The cause of death is cancer, which is typical of many dogs of this breed at this age. On the picture you can see the three puppies who were born through cloning from stem cells of Snuppy, which were taken from him at the age of 5 years. ie they are clones in the second generation. All three dogs are absolutely identical to each other and to the original.

In contrast to their father-clone they were born with much less “biological costs”. To get Snuppy scientists used 1093 embryos that were fertilized by cloned cells and implantable to 123 dogs (surrogate mothers). Only 3 females became pregnant, and only one of the three puppies could be born and live a normal life, it was Snuppy. Thus, the probability of his birth was 2.4%. 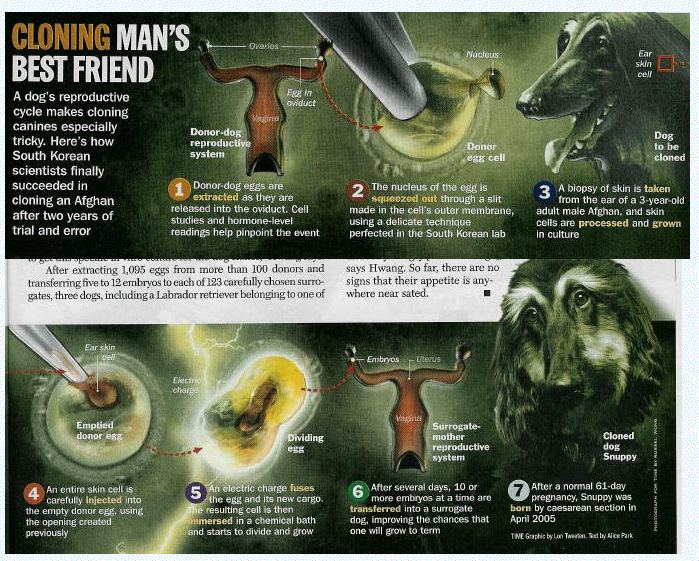 The indicators of successful birth of the reclones reached 42-44%! Scientists used only 94 embryos, fertilization led to four successful pregnancies. Four puppies were born, one of which died after a few days due to acute diarrhea. At the moment, all puppies feel good and have reached the 9th month of age. Throughout their lives, scientists will closely monitor all their biological indicators. Detailed scientific report

Such experiments demonstrate how close we are to biological immortality, in one of its manifestations. In fact, having the original cells at hand, you can clone their carrier an infinite number of times through several generations without any changes in the genome. sciencepop science clone til busy
3년 전 by natord66
$4.94
15 votes
댓글 남기기 4
Authors get paid when people like you upvote their post.If you enjoyed what you read here, create your account today and start earning FREE STEEM!
STEEMKR.COM IS SPONSORED BY

Oh goodness am I the only one thinking about storm troopers after reading that. Still quite a low percentage and for dogs but really just seems like a matter of time.

Also guess it gets much trickier for other more complex species.

Actually, dogs are fairly complex creatures, they are the highest animals, the mammals, are viviparous, with a complex brain like humans. So in fact we can clone humans, but such experiments are forbidden. And it is difficult to predict what specific genetic diseases can act as a side effects.

I also thought about storm troopers and wanted to add a picture at the end of the article: storm troopers with the heads of these puppies. However, judging by my previous post, readers do not take the psychedelic images in science posts :)