Hello science lovers! As I promised, I continue to publish a digest of news from the world of science. The theme of the previous post was nature, so today it's time to learn what has happened in space.

This time it was not difficult to determine the most epic discoveries and I hope they will surprise you. As always, I tried to convey information in simple language and supplemented it with some facts that may be interesting.

Gamma-ray bursts in the laboratory

Gamma-ray bursts are grand cosmic events, which involve huge releases of energy. Such flashes have a duration of 1 to 100 seconds and can release up to 10^ 50 erg of energy per second. For comparison, our entire galaxy emits 100 times less energy per second. 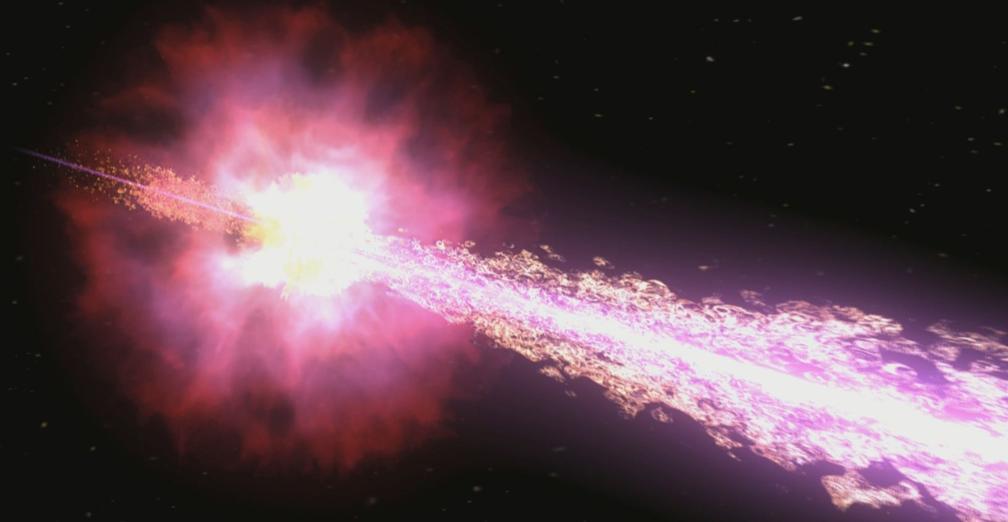 If the burst occurs within a radius of 1000 light years from Earth and will be directed toward our planet, then we may well lose the atmosphere.

Despite the fact that our telescopes record gamma ray bursts every day, they are poorly studied. An understanding of the nature of the phenomenon is also hampered by the diversity of gamma-ray bursts (different duration and power). Modern theories argue that gamma-ray burst sources can be different objects. In the past year managed to establish that one of these sources are neutron stars.

Another theory refers to supernovas. Under certain conditions (high density of the star, rapid rotation), energy is emitted not from the entire surface evenly, but within the boundaries of a narrow cone- jet. The formation of a jet with gamma-rays in a black hole. [image source]

If inside the cone observed low density of matter, the radiation pressure can accelerate particles to almost the speed of light. As a result, inside the cone forms a powerful magnetic field, which causes the electrons and positrons to release huge amounts of energy in gamma and x-ray ranges.

Scientists from Queen's University Belfast decided to test this theory in practice. With the help of the Gemini laser, they were able to create a powerful stream of radiation, which in just a few hundredths of a second generated 10 * 21 watts of energy. It's like to direct 10% of the energy radiated by our sun to one meter of the surface. [source]

As a result, was created a narrow beam of electrons and positrons simulating a supernova jet, which gave birth to a powerful magnetic field. The theory of supernova stars as sources of gamma-ray bursts confirmed. So, today we can say that sources of gamma radiation can be at least two types of objects - neutron stars and supernovae

What struck me more was the fact that this is the second case where people were able to reproduce the amazing cosmic phenomenon in the laboratory. (Earlier I wrote about the fact that scientists were able to obtain the highest temperature in the Universe). Just imagine, we can simulate the ejection of matter from a supernova, albeit a fraction of a second!

Not all black holes are eaters

Imagine hundreds of thousands of stars, which are located relative to each other to 7,000 times denser than usually in space. The distance between stars at this density is only 0.3-0.5 light years. For comparison, the closest star to our Sun- Alpha Centauri is removed to a distance of 4.3 light years. Such cosmic structures are called globular clusters, and each star in it is the same age as the galaxy.

And now imagine what would happen if you put even a small black hole inside such a structure. The smallest black holes have a mass of 1.4 solar, and the radius of action of gravitation of our Sun is about 1 light year.

Those, even the smallest black hole will actively attract matter within a radius of 1.4 light years (remember the distance between the stars in the cluster - 0.3-0.5 light years).

It would seem that a black hole inside a globular cluster should steadily eat the stars located so close. But, scientists have discovered that not all black holes are active eaters.

A group of researchers from the University of Göttingen found an amazing black hole in a globular cluster NGC 3201. Discovered black hole has a mass of approximately 4.36 of our suns, but it does not absorb any substance and light. In fact, it is not active and is only a gravitational center for nearby stars. [source]

The most important in this discovery is the method of detecting. Light cannot escape a black hole because of the actions of its monstrous gravity. Therefore, the main method of detection of black holes is observations of radio or x-ray radiation from hot substances in the surroundings. But the detected black hole does not accumulate mass and does not heat the space, ie is invisible. So, for the first time astronomers were able to detect a black hole by its gravitational influence on nearby stars.

One More Reason to Colonize Titan

Cassini spacecraft has completed its mission in October 2017. But terabytes of the received data are still being studied, and serve as a source of new amazing knowledge about Saturn and its satellites. About a year ago, I wrote post in favor of Titan as the best place for colonization than Mars. Now I can add one more argument. Cornell University unveiled the most detailed map of the Titan's surface. It still has white and fuzzy spots, but overall we now know how looks the surface of a possible future colony. It turned out that Titan is more flat than the Earth. [source]

The average height of the mountains on Titan is just 700 meters and the highest peak has a height of at 3,337 meters (three times smaller than Everest). Cassini's flight allowed to obtain surface data with a resolution of 40 cm per pixel. 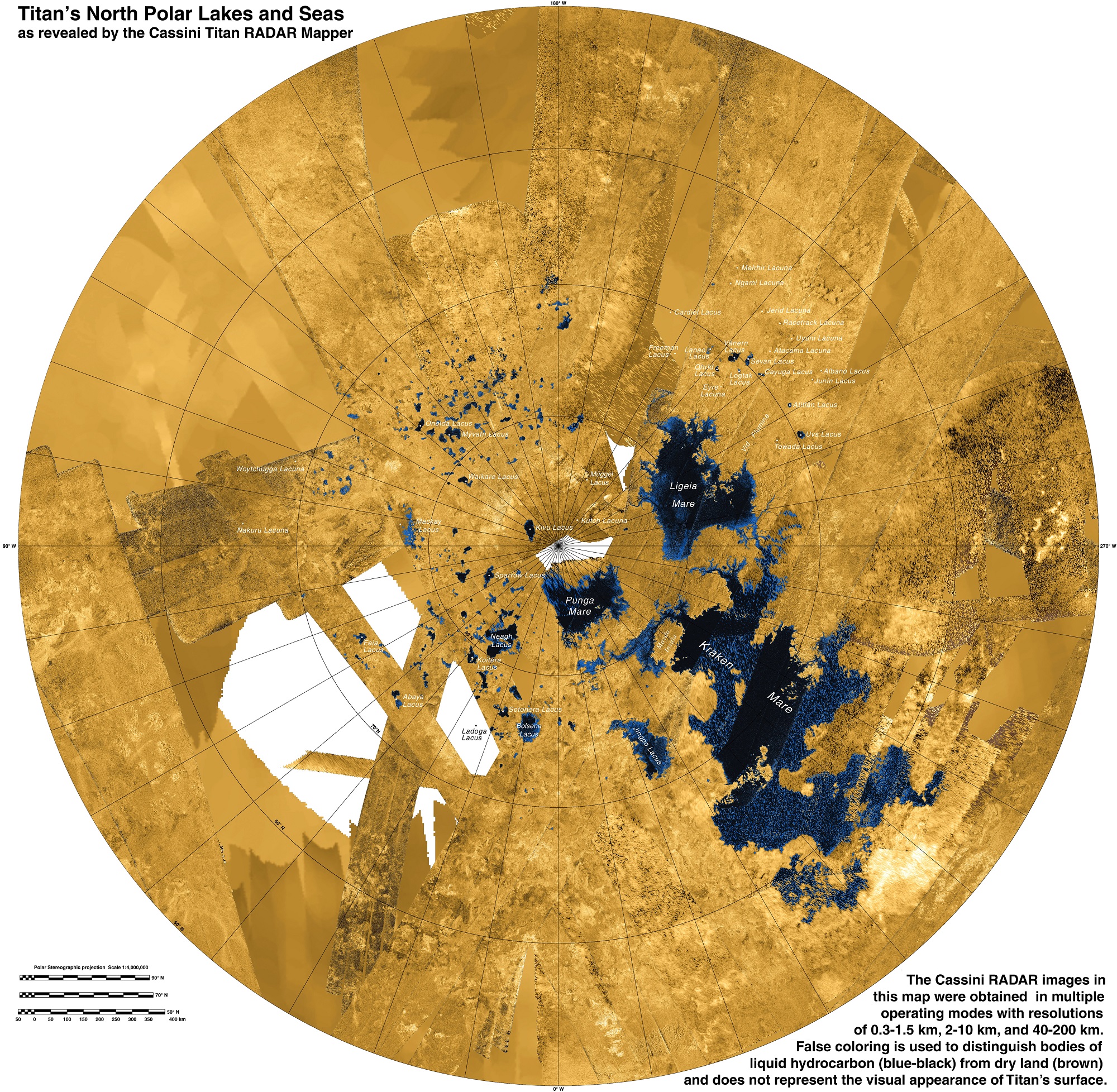 It's an old map. The new one is not yet published. But here you can clearly see the main geographic features.[full size image]

Also managed to make another important discovery: The largest Titan’s seas (Kraken Mare, Ligeia Mare and Punga Mare) are connected. Those, Titan has a common sea level, like the Earth. Uniform action of tidal forces will help to predict the ebb and flow and will allow to receive additional energy from these sources.

Apparently, the seas and lakes of Titan are connected to some kind of subsurface networks and reservoirs. But, in order to find this out, we will have to send a new mission to the surface. Tracking sea-level will allow scientists to better study the gravitational field of Titan.

Awesome news that made me choke on tears of happiness. FOX and National Geographic has announced the approximate premiere of the second season COSMOS: Possible Worlds with Neil Tyson.

According to the creators, we can expect the release of the series by the spring of 2019. Why so long? Well, look the first season and you will understand how unique and grandiose the project is.

I hope you liked the digest of these short, but interesting news. I will continue to make digests on the theme of nature, technology, space and science 1-2 times a week. sciencepop space science steemstem busy
3년 전 by natord66
$11.58
19 votes
댓글 남기기 8
Authors get paid when people like you upvote their post.If you enjoyed what you read here, create your account today and start earning FREE STEEM!
STEEMKR.COM IS SPONSORED BY

I find the Titan stuff really fascinating. I vote for Titan!

Support. Left to shorten the period of journey from 7 years at least 2-3 years. I think your stories will help the colonists cope with the flight depression ;)

Haha, it I will be the first to be thrown out into the deep cold!!

It looks like a really serious radiation
Really valuable information

I do like reading about this news, thanks for sharing!

Wow Titan having actual seas. I realized I was living under a rock for a really long time apparently, as last year you made a post about Titan's features. Fairly exciting visibility we are getting into these candidates, that's for sure.

I quite often come across news that make me feel backward from life. Science is developing so rapidly that it is difficult to keep up with all the discoveries, while our school knowledge has become completely irrelevant.

science that can add insight to us about nature and its constellations.

Wow. What an interesting topic!