The Hidden Security Bugs in Architecture That You Never Noticed

Some of the best security features are subtly interwoven into the fabric of building design. 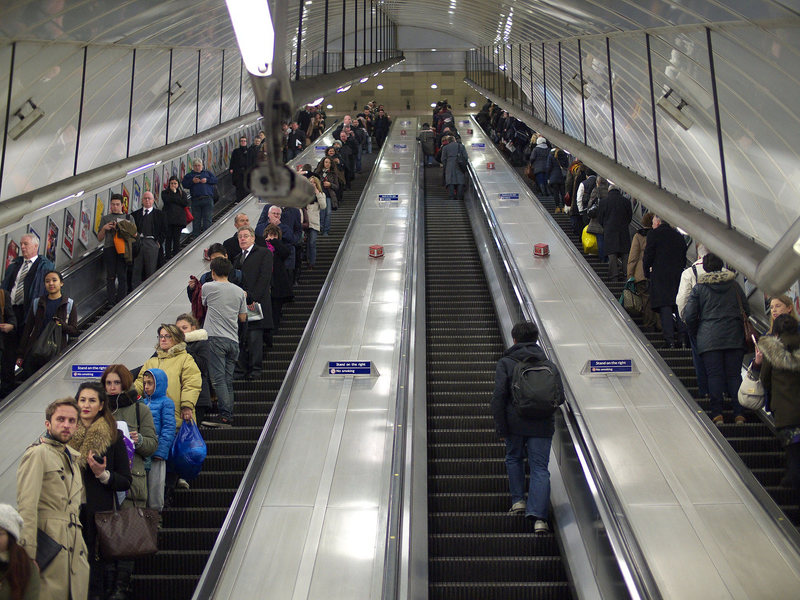 This escalator is giving security experts extra time to scout out criminals. (Photo: eliminium/CC BY 2.0)
When you are strolling through exhibits in the Nevada Museum of Art or making your way to the roulette table at the Circus Circus hotel and casino in Reno, you are a player in a well-orchestrated scene. Your every move is carefully watched as you unknowingly follow a plotted path filled with invisible bugs—security bugs. In his new book, Manaugh investigates how building architecture and the city grid could affect and cause certain kinds of crime. (Photo: Geoff Manaugh)
Hidden technologies and protective structures embedded throughout buildings are tools of war. The rivalry between criminals and security experts has influenced architectural design for centuries—from mapping where hallways meet, strategically placing escalators, and growing specific shrubbery. In his new book A Burglar’s Guide to the City, Manaugh dissects the architectural battle grounds of these two rivals.

The first thing many security heads will tell you about a building is how many doors it has, says Manaugh. They know exactly where all those exit and entry points are and what kind of protection guards each (key lock, electronic lock, automatic or timed lock, alarm, thorny plants, hidden camera, or a combination of securities). Security experts don’t just look at architecture for its historical value, beauty or craftsmanship, but rather pay attention to the strategic possibilities the building allows criminals a means to break in. Manaugh analyzes buildings from the perspective of bandits, police, FBI agents, and security managers—exploring how each use the design of buildings and cities to prevent and commit crime. 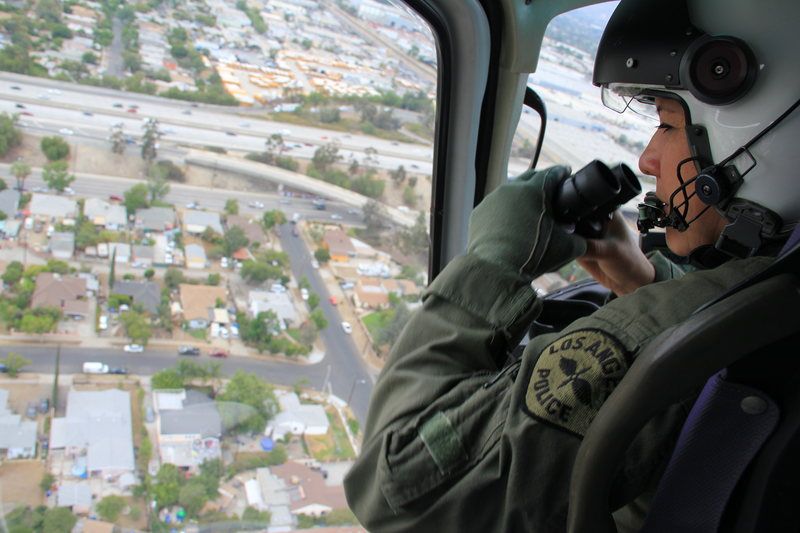 Manaugh shadowed the Los Angeles Police Department's air-support division viewing crime from the air. (Photo: Geoff Manaugh)
Security and architecture have always been intimately connected. The origins of buildings came out of a need for protection from the elements. The very first crude homes and huts can, metaphorically, be seen as security from the weather, says Manaugh. The very first locks date back to ancient Egyptian door locks made of wood. “You can actually trace any involvement of architecture throughout human history with different security concerns; that could be as simple as walled cities or as complex as today’s geofencing against drones.”

Today, building security has evolved—a cornucopia of technologies are available to security teams. Security centers can track people throughout buildings with motion detectors, thermal cameras, pressure sensitive pads, and electromagnetic fields that lock on and follow radio-frequency identification tags. Even the simple hidden or disguised camera shouldn’t be underestimated. Manaugh once operated an outdoor PTZ camera, or pan-tilt-zoom, which was so powerful that he could see three to four blocks away and read numbers on license plates. A PTZ camera blends into the grey building. (Photo: AxisCommunications/CC BY-ND 2.0)
But perhaps the most compelling defenses against burglary are the simple designs woven into the fabric of built environments.

On a unique tour of the Nevada Museum of Art, Manaugh was able to experience how subtle some of these security features are. While visitors marveled at exhibits, Manaugh followed Jes Stewart, head of the museum’s security, as he described the "various invisible forms of security that have been installed there, hidden in the walls, floors and ceilings." Air ducts and the angles of air conditioning machines play into security master plans. Air conditioners need to be positioned so that they don't blow loose papers off a desk in the middle of the night and trigger the motion detectors, or else there would be an entire unnecessary security response, says Manaugh. Even insurance companies have their hand in the security of the museum, dictating exactly where paintings should be mounted on a wall or how exhibits are oriented so that they provide optimal tracking shots recorded on a closed-circuit television. 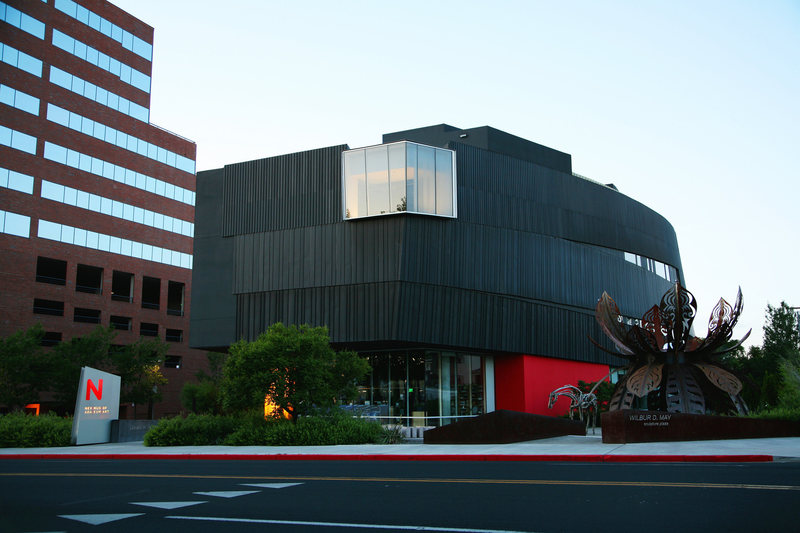 The inside of the Nevada Museum of Art has an assortment of security features embedded throughout the architecture of the building. (Photo: Travel Nevada/CC BY 2.0)
Stewart also described how museums create choke points and funnels, where corridors and pathways narrow to bottleneck movement, manage circulation, or give security time to corner a fleeing criminal. This same architectural feature can be found in casinos. However, in Nevada, many of the first casinos dotting Las Vegas and Reno were not built with security in mind.

“Instead, security managers now have to find a way to retroactively build choke points into the layout and funnel everybody past high-resolution cameras,” Jason England, a Las Vegas-based magician and authority on casino gambling, told Manaugh, like the oddly placed escalators at the entrance of many casinos. The result “might not be great buildings, in an architectural sense—but they are great at taking pictures of you.”

Manaugh spoke to Darrel Clifton, a well-respected leader in the security world and the head of security at the Circus Circus—a 37-year-old hotel and casino in Reno, Nevada that lacks the kind of ideal architectural design for security. Clifton has to be scrappy. Decorations, furniture, gaming stations, and retail cash registers are all coordinated with camera placement to ensure comprehensive views of a space while blending into the environment as much as possible, Manaugh wrote. Circus Circus in Reno has 1,572 hotel rooms and a 65,000 square foot casino all of which needs to be monitored carefully. (Photo: Ken Lund/CC BY-SA 2.0)
Clifton uses landscape architecture to his favor, selecting a particular species of plant called trifoliate orange not for beauty, but for creating a protective barrier—a living fence. The dense, fast-growing thorny plant, commonly referred to as the Rambo bush, can stop speeding vehicles and has even been used to secure U.S. military buildings, such as missile silos and armories.

Convenient modes of transportation inside buildings manage movement, while also providing another opportunity to track people. Escalators in casinos and other buildings serve as an optical apparatus that give security teams an almost 360-degree view of everyone moving through the interior of the building.

“People will dutifully line up one behind the other and most people, especially in the U.S., don’t walk on escalators. They’ll just stand there even if it’s just a 20-foot ride,” Manaugh says. “It gives the security team an extra 20 or 30 seconds to take photographs or video footage from pretty much any side.” 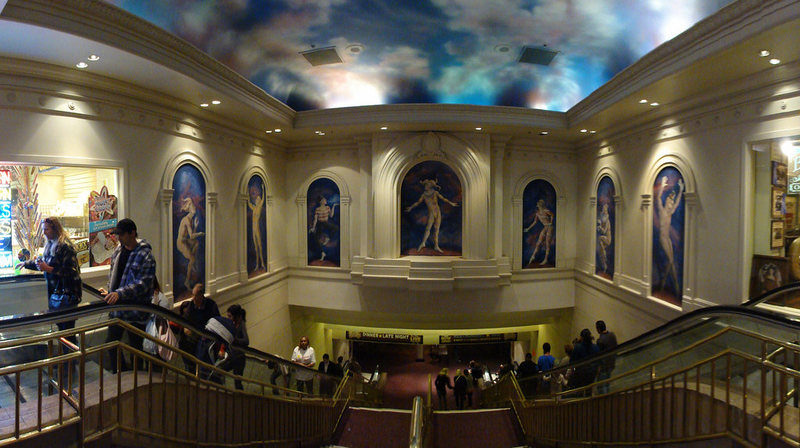 These escalators at the Circus Circus in Las Vegas (a different casino than the one Clifton operates) give security experts the advantage of scoping out burglars. (Photo: inazakira/CC BY-SA 2.0)
An elevator is even smart enough to catch burglars. Elevators have scales that can calculate the weight and number of people occupying the carriage. At a casino in Reno, a security manager, who is a friend of Manaugh's, told him that an elevator flagged a person that weighed much more than he was supposed to and was caught with hundreds of dollars’ worth of coins hidden in his clothes.

Not every building housing money or precious materials are so well protected, though. Some have security cameras that may not be real, the building owners hoping it will be enough to deter people from stealing, says Manaugh. On the other hand, Manaugh has heard of terrifying, highly secure suburban family homes run by drug dealers that are equipped with trip wires and guns. Some suburban homes can be more secure than banks. (Photo: Geoff Manaugh)

Increasingly, new buildings are integrating more modern security technologies into the initial design of interior layouts. With the wave of smarter buildings and cities, security mechanisms and information lie in digital networks and files. For example, there is a safe-deposit box that contains the codes to an entire city. The operating system that permits communication between buildings, urban infrastructure, and devices in New Songdo City, Korea had to be backed up in files and held in a safe in case the system crashes. The technology may allow cities to work faster and more efficiently, but this is also a huge risk, says Manaugh.

Over time, criminals will reveal "things about the way we design our cities that many people haven’t been anticipating,” he says. 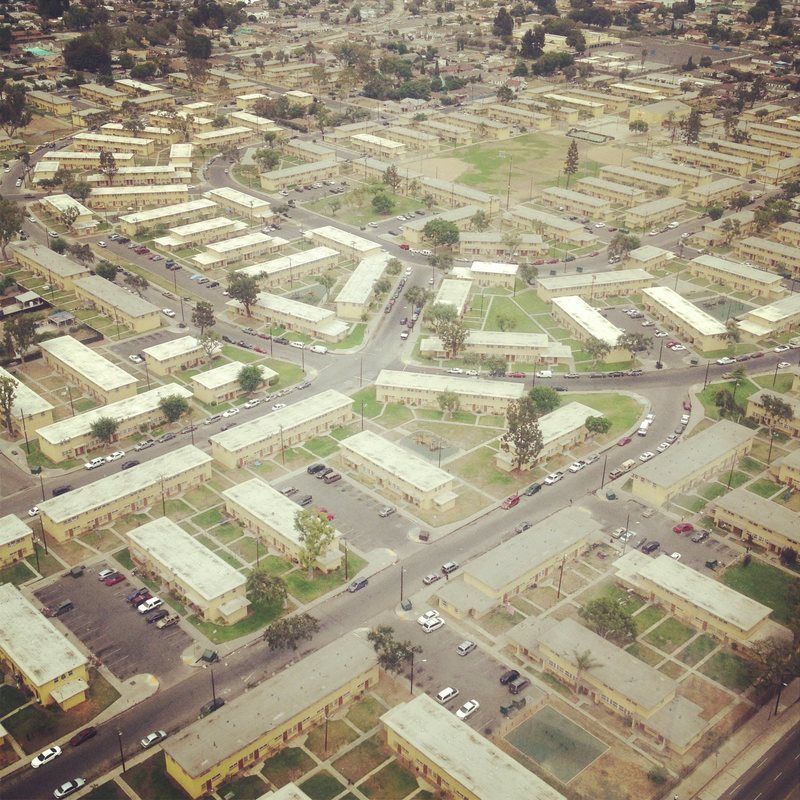 The cat-and-mouse chase throughout cities and buildings continues on. As security experts battle to protect people, these technologies and methods raise concern over privacy—whether or not people can opt out of being constantly surveyed. Manaugh believes that we could be either entering a science-fiction fantasy or an ominous dystopia. It all depends on how these technologies are managed and controlled.

“You enter a really interesting sphere where the world can be tracked according to technologies that you otherwise wouldn’t know you’re being tracked by,” Manaugh says. “There are security experts on one side and criminals on the other, and somewhere in the middle is us—civilians—who aren’t really aware that there’s this war going on.”

security architecture bugs buglary technology
3년 전 by bobbydraxler25
$0.00
4 votes
댓글 남기기 1
Authors get paid when people like you upvote their post.If you enjoyed what you read here, create your account today and start earning FREE STEEM!
STEEMKR.COM IS SPONSORED BY