Voting with multiple addresses in one shot

I times where most SmartCash owners have split their funds into multiple addresses due to SmartNodes, SmartRewards or whatever reasons... its currently hard to cast votes with your full voting power. I have no doubt that this will become better anytime in the future since there is probably any wallet integration coming for this...

For now i just created a script which lets you vote with your full voting power in one shot!

The install process of the script is pretty simple. Its all explained in its GitHub repo where you can also see the full source code. You can find it here:

This will work everywhere you can run python. I only tested it with macOS and Windows 10 though.

What you should know

In order to use this script you need to configure your wallet to have the local RPC server enabled. This is because the script uses the RPC interface to sign the needed voting messages. Like you would do it manually from your wallets Sign message tab.

Its also required that your wallet is unlocked for the voting process. You have two options here.

In this case the script does not lock your wallet if its done. Its up to you to run walletlock in the debug console once your done with the voting.

Let the script unlock when required

If you don't unlock your wallet before running the script it will ask you for your password. In this case the script will only unlock the wallet for the moments it needs to sign the messages. Once a message is signed it gets locked until the next sign is required. It will also lock the wallet if you quit the script.

Also in this case you don't need to worry about your entered password. Everything is open source and you can go through the code to see that its only used to unlock before signing the required message. Its doesn't do anything else with it.

Its up to you

I just want to let you know that this configuration of your wallet in combination with your wallets encryption password which you type into a terminal where a python script is running should be used with much care!

If you really have nooo idea what you are doing... i would recommend to begin with trying to get it and come back later :)

There you see that it first collects all your addresses which are ready for vote. Then it checks if the wallet is already unlocked. If its not it will ask you for the password. 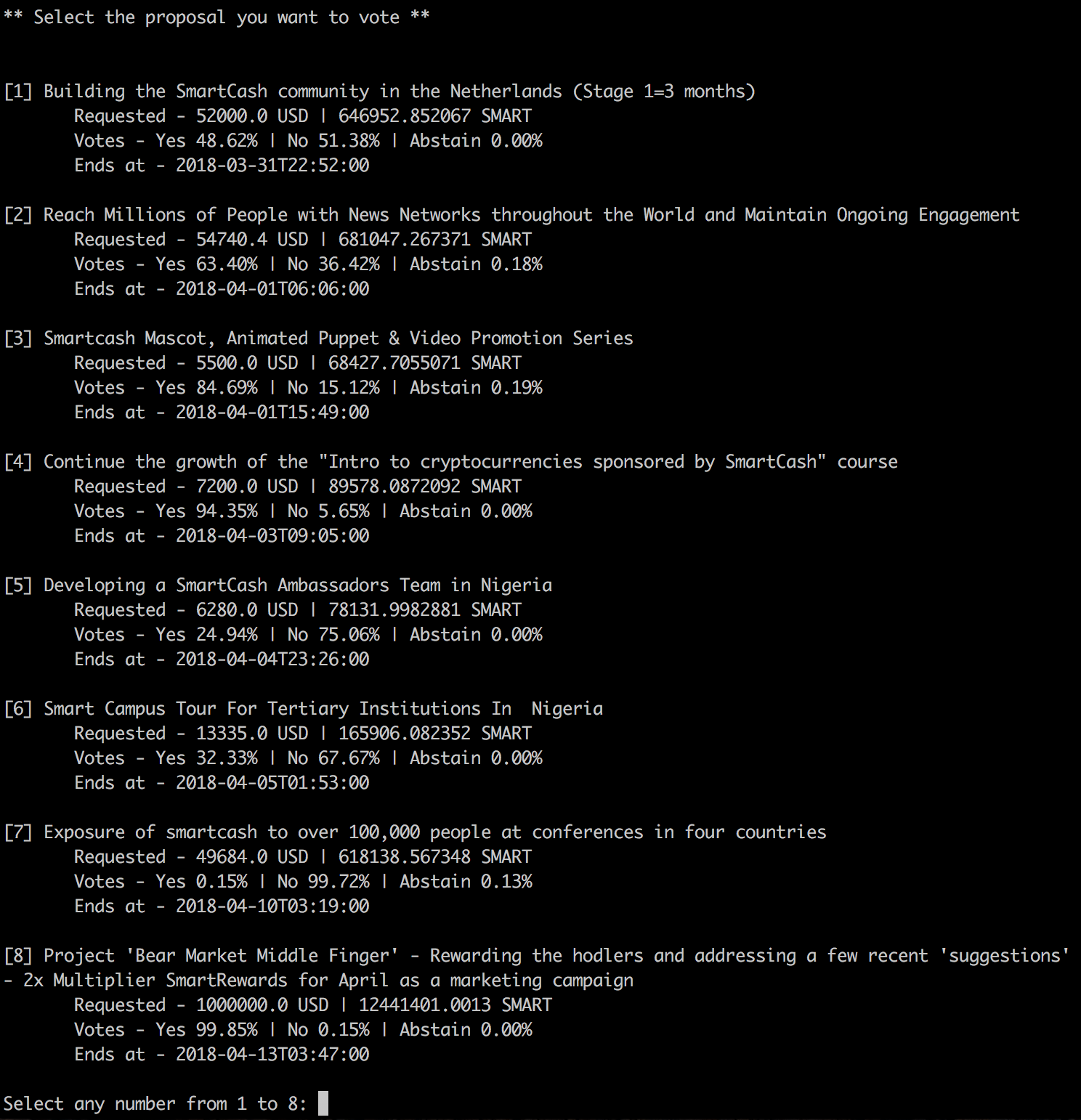 Here you just choose which proposal you want to vote. Next you will be asked for your desired voting type

Type y, a or n then hit Enter to start the voting.. Then you will see the following screen

Thats it! One shot to vote them all :D

If you enjoy it and you are feeling the urge to tip me...go ahead :D

smartcash smarthive voting cryptocurrency
2년 전 by dustinface45
$1.92
21 votes
댓글 남기기 6
Authors get paid when people like you upvote their post.If you enjoyed what you read here, create your account today and start earning FREE STEEM!
STEEMKR.COM IS SPONSORED BY

Wow this is a great development. I dont have much voting power right now, but will keep this handy, it will come in useful as i grow in smart coins.

Another very useful tool from @dustinface. On behalf of myself and the community of smartcash users, thank you. I Have found voting challenging and would definitely be trying out this script.

Wonderful post ..thanks for sharing...Best of luck friend ✫

this is the best bot for steembottracker clik here https://steemit.com/bots/@hassanbenali/the-best-bot-for-service-how-to-create-steem-bot-tracker

Transfer 0.200 SBD or 0.250 steem to @mrbean1 and put the link of your post in the public memo you get 5 good UPVOT and resteem by @mrbean1 +followers

really a great step 😁 😁 but now the blockchain has already made us a programmer, even if you ain't one following a blockchain topic will force you to. know one or two things, 😎

Σ$$$ Tipped @dustinface Σ20 SMART! Comment @smartbot help to claim. Currently the price of SmartCash in the market is $0.085 USD per SMART. Current value of the tip is $1.70 USD. To find out more about SmartCash, please visit https://smartcash.cc.