Updated guide for the new version of the SmartNodeMonitorBot!

If you have no idea what this is about click HERE To give a more reliable position indicator for your nodes i digged through the SmartCash core code and re-implemented the position calculation which is used from the miners to determine the winners for the payouts.
There are three ways now to get the positions of your nodes:

At the time of writing there is still a problem in the node network (not all paid blocks are populated to the nodelist) which can sometimes end up in slightly wrong calculations but from my testing/logging it looked pretty good in the most cases. This should become better over the time when more pools are updated to the 1.1.1 wallet and should be much more accurate once the 1.2 release fixed all the current issues!

Click here to check out the position calculations. If you have any concerns about its propriety let me know!

When there is a protocol upgrade needed for the network all nodes need to be restarted after the wallet update. This means their uptime will also become resetted and according to this none of them would be eligible for payouts. But due to the upgrade mode state in the network which is hard coded in the SmartCash core nodes with an too low uptime are not penalized when all nodes had to restart at any point (Meaning of the upgrade mode). At the time of writing we were in the upgrade state of the network. The bot will from now on recognize if we are in upgrade or normal mode, print information about it in the info command and also incorporate it for the position calculations.

Click here to check out the remaining upgrade mode time calculation. Also here: If you have any concerns about its propriety let me know!

The info command contains now lot more information about the SmartNode network. Check it out :D (Its also available in telegram but the message there was too long to fit on a screenshot :P) 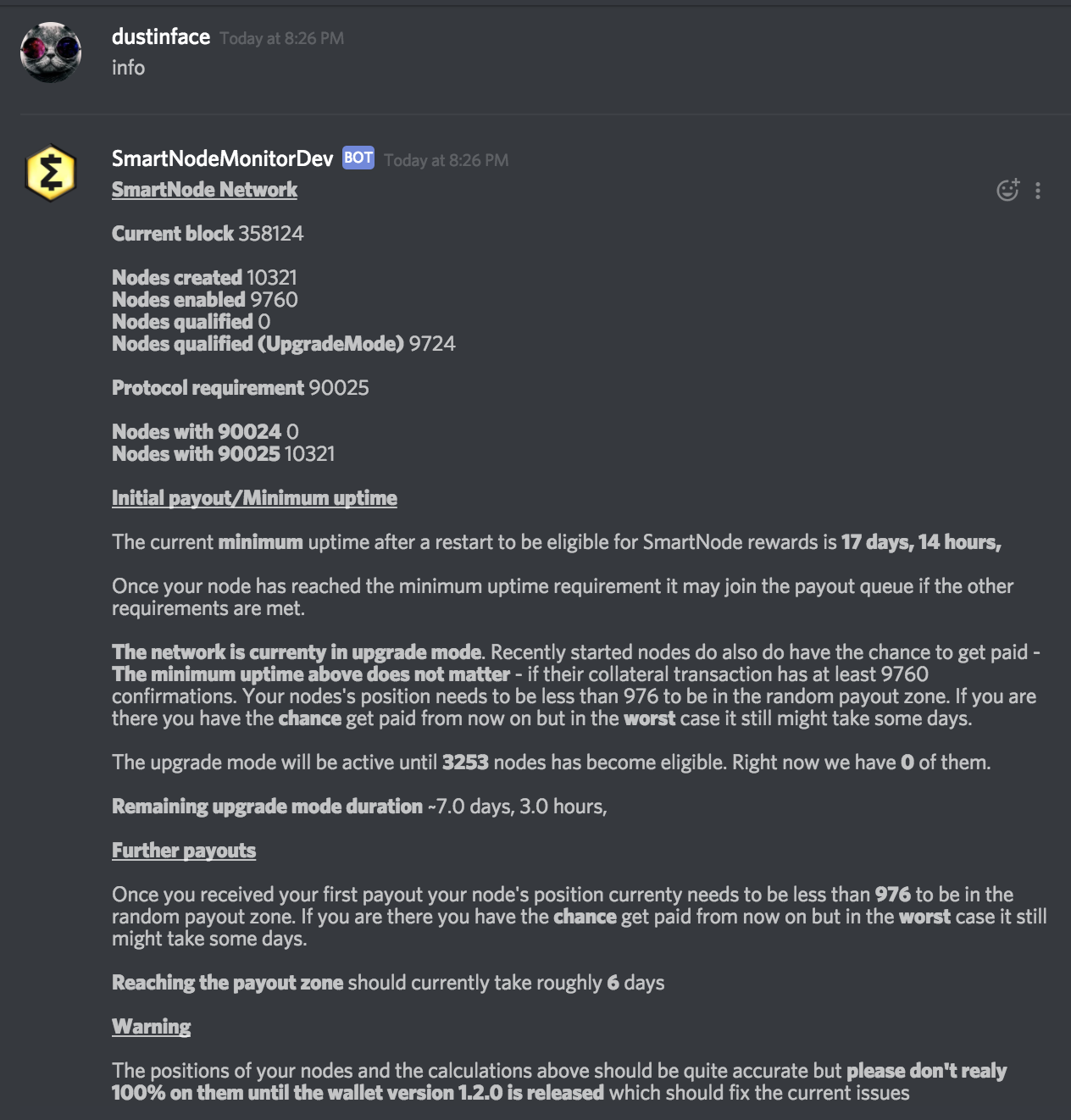 With the new lookup command you can check if a nodes payout requirements are met. To do this just fire the command with the ip or multiple ips as argument.

Edit multiple nodes in with one line

From now on you can now use the editcommand in the same way like the add command to edit multiple nodes in a row.

Remove multiple/all nodes with one command

or just all with

Discord users can now use shortened commands. Also if you have small misspellings in your sent commands the bot will match them to the most similar command. I cannot tell you exactly where the boundaries are but you can just play around a bit to figure out your preferred abbreviations :D

If you enjoy the bot and its new features and you are feeling the urge to tip me...go ahead :D

smartcash smartnodes telegram discord masternode
2년 전 by dustinface45
$29.66
25 votes
댓글 남기기 19
Authors get paid when people like you upvote their post.If you enjoyed what you read here, create your account today and start earning FREE STEEM!
STEEMKR.COM IS SPONSORED BY

Thanks for the great work!

Thanks man! I will keep up the work ;)

Thanks @dustinface. I use both the telegram and discord bots and they are most dependable monitors. There has been two occasions it told me there was a node reward which I could even see on explorer! the bot was right both times.

Great to hear! Thanks for nice words! Enjoy it! :D

hey admin. How do i get on the discord channel i cant seem to verify my Identity it says i am rated limited. what do i do?

You are rate limited for the SmartCash discord? Honestly now idea how this can happen lol. Do you try to do SMS verification?!

Very nice! This is what makes Smart Cash a top project, THE COMMUNITY!

I am just getting into all these cool Smartcash features. So cool to have a bot like this to monitor the nodes. it's incredible how fast SmartCash has developed. the combo with Steem works really well.

Thanks for your work!

Transfer 0.200 SBD or 0.250 steem to @mrbean1 and put the link of your post in the public memo I GIVE you FOLLOW AND 5 UPVOT and resteem by @mrbean1

Thanks so much :D Really nice to hear! And thanks for the tip :)

Σ$$$ Tipped @dustinface Σ10 SMART! Comment @smartbot help to claim. Currently the price of SmartCash in the market is $0.205 USD per SMART. Current value of the tip is $2.05 USD. To find out more about SmartCash, please visit https://smartcash.cc.

Thanks.... this is very helpful

Your welcome man! Good to hear!

Σ$$$ Tipped @dustinface Σ15 SMART! Comment @smartbot help to claim. Currently the price of SmartCash in the market is $0.193 USD per SMART. Current value of the tip is $2.90 USD. To find out more about SmartCash, please visit https://smartcash.cc.

Thank you man! I really appreciate it :)