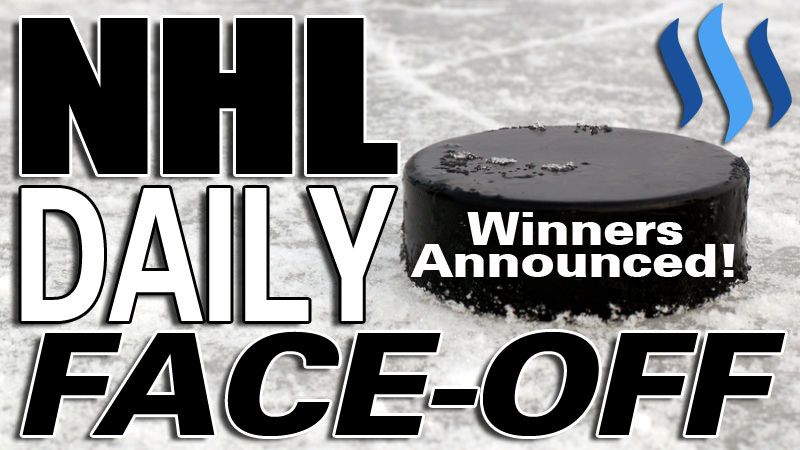 
All 5 players went 6-2 on their picks and picked the correct total combined score for the bonus giving them all a total of 9 points, way to go! However, not a single one had a correct pick for either tiebreaker so we ended up with a 5-way tie. As I continue to work the kinks out multiple ties like this should be less likey.

Pick the team with the MOST GIVEAWAYS: CHI with 29

Pick the team with the MOST FACE-OFFS WON: both VEG & DAL with 47

Remember to play daily because your points will accumulate throughout the season giving you a shot at the Season Pot!

We had a total of 29 contestants for the October 10 match-ups, a big thanks to all the participants! until next time...
sports contest hockey nhl nhldailyfaceoff
4년 전 by liberty-minded63
$5.27
25 votes
댓글 남기기 10
Authors get paid when people like you upvote their post.If you enjoyed what you read here, create your account today and start earning FREE STEEM!
STEEMKR.COM IS SPONSORED BY

@eileenbeach has voted on behalf of @minnowpond. If you would like to recieve upvotes from minnowponds team on all your posts, simply FOLLOW @minnowpond.

10 fake accounts with 25 reputation enter this contest, 2 of them won. You should stop that.

@cmoljoe which accounts and how do you know they are fake?

All 10 with 25 reputation. If I would have contest , I will make rule you must be at least 40 reputation to enter contest. Everybody can make many fake accounts to have multiple entries to contest like this, so they can have bigger odds of winning. If you make this rule, you will avoid this. I saw some other contest creators making this rule to avoid multiple enteries from one contestant.

I certainly understand your reasoning however I have no way of knowing if accounts are fake or not. Which contests that you know of have instituted a rule like that?

There are new accounts created on Steemit constantly and I don't want to shun real new users on the platform but I also don't like the idea of people trying to take advantage of the system.

I went to check comments few of them...of course it is all sport contest and no one post. It is obviously fake accounts to have multiple enteries in sport contests. I know few sport contest like from @nanzo-scoop and some other photography contest having this rule. Nanzo have rule of 35+ rep, but I would put it even higher because of changes made reaching higher reputation more easily now.

I appreciate the heads up @cmoljoe

yer man joey probably has a point about accounts but he also suggests a reputation minimum of 35 or 40 which he has already surpassed. it might be naiive to think there isn't some self interest involved in trying to block other accounts which are newer than his from entering. I won't say it's pure self interest. but you won't see him suggesting a min reputation of 65 or 70.
as it stands he would directly benefit from banning other users

let's say a few people with reputation in the 30s now enter your comp and resteem the odd time and gain few followers a week. this eventually leads to more people entering your contest and makes it potentially more worthwhile for you.

obviously I am defending myself as my reputation needs work to get up to 40. and if I can't comment on posts I'm interested in, that'll take longer

if you want to reduce the number of ties in your competition make a rule where each entry has to be unique and the first unique entry wins if people copy paste. ( by the posted time - or time it was last updated)

and for the record if you are going to change it to reputation score you may as well make it high, then at least most of us including joey will have to work to get there

I don't have any self interest in this. I don't care if I win or not. I have problem with people having multiple enteries with fake accounts. If you don't see it as problem, that's your problem.

You made one post in your 9 days on Steemit, but you had many comments on sport contest. You didn't put any effort to build up your reputation and you are wondering why your profie is suspicious to me? Don't want to call you fake, but how would fake profile made just for sport contests look like then that?

I appreciate your feedback @isellbooks

I'm not here to be judge nor jury so as long as Steemit allows it, so will I. I have no interest in preventing new(er) users from participating. While I can certainly understand his point, it's not enough for me to take action.