Like everything, it has its pros and cons, but for me the pros are HUGE, and the cons aren't significant enough to worry about. I wanted Steemit long before it finally came around. Back in 2012 I was insistent in my YouTube videos that some method of rewarding activists, artists, and other content-creators MUST be found and employed. I didn't know what it would be called or how it would work, but I knew the need existed.

Relatively new on the scene, Steemit uses blockchain technology not available before to allow tiny micropayments between users. Transparency and security are built in, but there's the possibility for certain personal privacy. The banks don't own it, and it could destroy them, so we have to realize its potential. It appeals to me on many levels.

After being here and "grinding" from 0.5 Steem Power up to 50 Steem Power, in about 3 months, I must tell you that the battle is long and hard! I'm not sure how new users, with only 0.1 Steem to start, will be able to get noticed. I had an audience with me when I arrived, many people don't. And it's getting harder every week to earn Steem, for various reasons. Most new accounts have little hope of establishing themselves on Steemit unless they've got extremely precious footage to upload. Celebrities, for example. But most people, like my newbie friends, are never going to make more than a few cents here.

That's why I decided to spend my Bitcoin, which has just been sitting there doing nothing, to buy Steem. 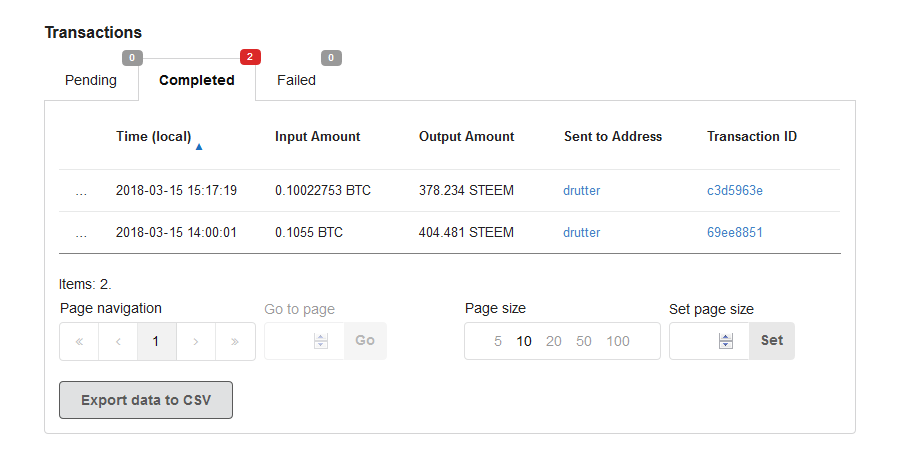 First, I spent about half of it, just to make sure the process worked and I was happy with the result. When I was, I spent the rest of my bitcoin, and now I'm "all in" Steem.

I sent 50 Steem to my friends @girlsofgreen and 100 to my friends @greatesteem. I trust they'll power it up and use it to build their causes and help their smaller friends.

This is how it's done around here!

Please do what you can to improve the blockchain. If you're down with Liberty, ending cannabis prohibition, precious metals, and cryptos... we're family. Let's build each other up.

steem bitcoin cryptocurrency steempower
4년 전 by drutter69
$0.47
18 votes
댓글 남기기 24
Authors get paid when people like you upvote their post.If you enjoyed what you read here, create your account today and start earning FREE STEEM!
STEEMKR.COM IS SPONSORED BY

Wow, thanks so much @drutter! The @girlsofgreen are really gonna feel the growth spurt! :)

That’s extremely generous of you mate. Well done. And excellent idea to go all in on Steem Power. It’s the perfect way to get your investment to generate a great return. I’m also about to sell off the rest of my crypto and convert it all to SP.

Agreed! SP is cheap right now. A great time to move in from USD and other currencies. Also a good time for converting from BTC, since BTC isn't down as much as Steem lately : )

Yeah @mazzle, I totally agree with you. For me, it was actually really easy. The site did most of the work, there were no glitches, and within an hour it was complete. I'm VERY happy I moved more into Steem. I can always buy something else with it later, but in the meantime, it's pulling in profits because I've invested it the site. Which to me is a win-win, since I believe in the site!

One thing I should add: It was REALLY easy. I thought it would be tough, since I'm not fully crypto-literate yet, but Steemit made it easy. I was sent to blocktrade where I was given an address. I put that into my bitcoin wallet, selected how much I wanted to send, and what fee I wanted to pay (I chose the lowest fee). It took very little time to send, and the site did all the work behind the scenes. It's far more convenient to be your own bank than you might think! I'm not easily impressed, but I'm impressed.
Thanks for resteeming my post, @hempy : )

Thank you again. We're already putting it to good use! Powered up and ready to Steem on. : )
It was nice to see a jump of 2 full cents with my upvote.

Now everything you upvote will pay out, nice!
My clicks are now worth 10 cents each. If Steem goes back to $8 each, my clicks will be worth nearly 50c each. : )
Keep adding value with your posts and comments, and you'll grow.

Awesome time to jump in. And now you can really help people out and bud up medikatie and girlsofgreen!

I'm half way so keep giving. Me that help!

Thanks mang! Nothing changes because of this though, between us. I'll still upvote your good content and you'll hopefully still upvote mine. It's not a competition and we're still on the same team.
So just blaze it!
We'll keep building each other up week after week! All this is, is a little boost for the team. Still got a long way to go till the top! : D

Well nice move. And it will help the community and I am glad you are spreading the love and we all yes we all keep growing.

thanks for all that i been a nenber form early on thanks to corbbett report but never have used ir nuch, ill make sure to upvoter and comment more thanks to your advice

Right on! Thanks for participating : )
Corbett report is pretty good, I didn't realize they got you into steemit, cool.

Very noble of you to donate your hard earned dollars! I am down with everything you said except for precious metals mostly because I am not sure how they it with everything else. Was that a test to see who actually read your post? 😉

Heh actually no, but I've been known to 'test' in such a way. This time, I'm being serious. I think precious metals (specifically silver at $16 USD per troy ounce) are undervalued. Gold and silver are private long term stores of value outside of the system and have been that way for thousands of years. I'm not really sure what their place in the future is, but that's where they're coming from.

@drutter this deserved a Full UP Vote just because I am impressed with your consistency and dedication to increasing your STEEM Power !! You are Leading the Way and an inspiration to those that are looking to be rewarded for their Content..............Peace be with You.

Thank you! I do try to be consistent. My dedication just comes naturally!
Peace also be with you : )

I would totally upvote you right now but im having to wait since I've just figured hout the benefits in 100% voting so I'm slowly climbing up from a few days of crazy voting. I will resteem this so I don't forget to UV you for genuinely caring about the community & staying positive in this world of doubt we seem to live in IRL. Thank you for showing you care to those who care about you! friendship is the strongest bond(no matter what any chemist would say Lawl)

It's such a learning curve around here eh? But I find it enjoyable and pleasant to learn, for the most part! Sometimes, learning through doing is a very powerful way to learn. Thank you for your comments and support : )

yes there is definitely a curve lawl, I do learn best from trial, failure, research, retry, rinse & repeat.
in less than 48hrs you will be getting a 100% vote from me ^_^

Good positive attitude!
Thank you. And congrats on your new 99.99%* voting strategy!

i am aware, but im wanting to make sure that i give the max to those who deserve it