My goals: I want to provide:

I began a short while ago providing technical analysis on one crypto coin of my choice each day. I enjoyed sharing my analysis to anyone interested in trading, investing, or just trying to learn about charting in general to gain an edge.

I didn’t feel that I was providing relevant enough information that made people want to check back in with my posts. I felt like I could provide more value and build up my credibility while still upholding my original idea of providing fresh, high quality technical analysis AND giving potentially actionable scenarios. Following up w/ them is something I wanted to do too as the picks played out.

I’m not guaranteeing any of these coins will do anything I say. I'm hoping for the best but expecting anything.

I am attempting to point out what I believe are coins that are behaving better and more reliably than the rest. Buying blindly has worked in this market so far, but it is unlikely to last for much longer. Knowing this, it is important to know what a better scenario looks like when compared to an average or below average entry location.

Now that you know my goal, let’s move on to my first pick!

If the pattern holds its current lows around the $1.95 area and breaks out to new highs then expect a run into the Fib levels shown in the chart.

A break above the upper blue trendline would signal the first attempt to continue the upward trend. No promises here. I am calling out scenarios and locations to expect it to happen.
Others that love the coin won’t mind buying it anytime they can so do what you prefer. Either way, to me its at a great time to enter because the trend is strong and it has rested well so you aren’t chasing it right now.

To throw a little water on this super hot chart I just want to reiterate that nobody knows what is going to happen. We can only look for areas to act that give us higher probabilities for success.

I hope you enjoyed this breakdown. Let me know what you think about my review. Too long/too short? Which coins do you think are about to move? Comment below!

I look forward to your comments! If you benefited from this please follow and up vote! 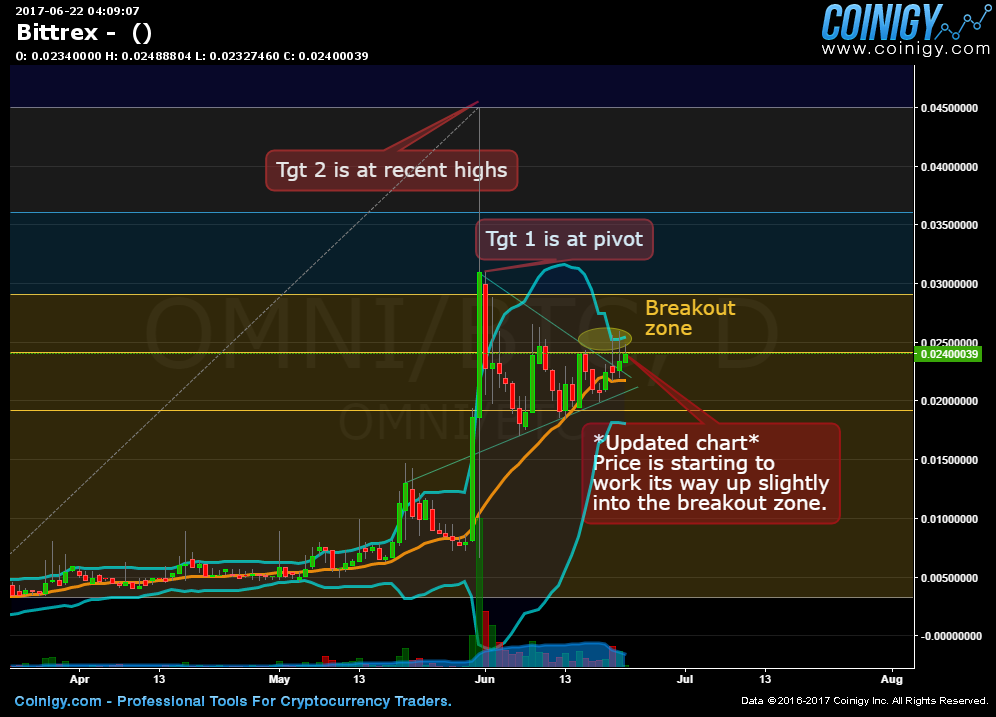 steem steemit cryptocurrency trading charting
5년 전 by inzan1ty44
$9.89
9 votes
댓글 남기기 7
Authors get paid when people like you upvote their post.If you enjoyed what you read here, create your account today and start earning FREE STEEM!
STEEMKR.COM IS SPONSORED BY

Glad you liked it. Thanks!

Is this is the correct area? I figured if anything could go in the Steemit section it would be STEEM analysis.

If I'm mistaken, please politely explain and I'll correct it.

Thanks for sharing an insight, Upvoted!

Thank You very much!

Congratulations @inzan1ty! You have completed some achievement on Steemit and have been rewarded with new badge(s) :