There has been a lot of “talk” that Steem is now owned by Tron or Trons owner Justin Sun.

One of the best articles out there to date is:
https://news.bitstarz.com/steemit-abandons-own-blockchain-for-justin-suns-hype-train In this article the topic is addressed objectively.

However, what seems to be the issue with most readers out there is a lack of understanding about the different terms and names that conatain “Steem” in their name.
This issue is further fuelled by various posts from people who do not understand or who are deliberately misquoting the term “Steem”.

Then there are many Dapps and apps that use the term Steem in their names.
One of which is the user interface (UI) steemit.com
Steemit.com was the first of the UIs to utilize the Steem blockchain. It is owned by Steemit Inc., a USA based company that had a huge 41% of the STEEM back in 2016.
These STEEM were acquired exclusively for further advancement of the Steem blockchain and likewise for the needs of running Steemit Inc. as a legally registered company in The USA.
Ref:

The Steemit, Inc.-controlled primary account, @steemit, which holds approximately 41% of the platform’s Steem Power, will be gradually divested of its holdings in an effort to increase promotion and development of the platform, and this distribution shall further the platform’s security through decentralization of voting power.

Several methods will be employed, including and not limited to: funding the continued research and development of steemit.com, the Steem Blockchain’s first and best application, promoting and publicizing the Steem Blockchain and features, hosting highly available
services for platform users, sponsoring conferences and community gatherings, and sponsoring undertakings to build applications and increase user adoption across the entire ecosystem.

This will likely be a multi-year process, but is included in this 2017 Roadmap for the sake of clarity and understanding surrounding our organization’s plans and goals.

We have several very large initiatives currently in research serving this goal, and the community should expect further announcements later in the year regarding our firm plans as it yields fruit.

Ultimately, the goal is to harmoniously align the interests of all participants across the entire spectrum of people using and trading in STEEM. “ 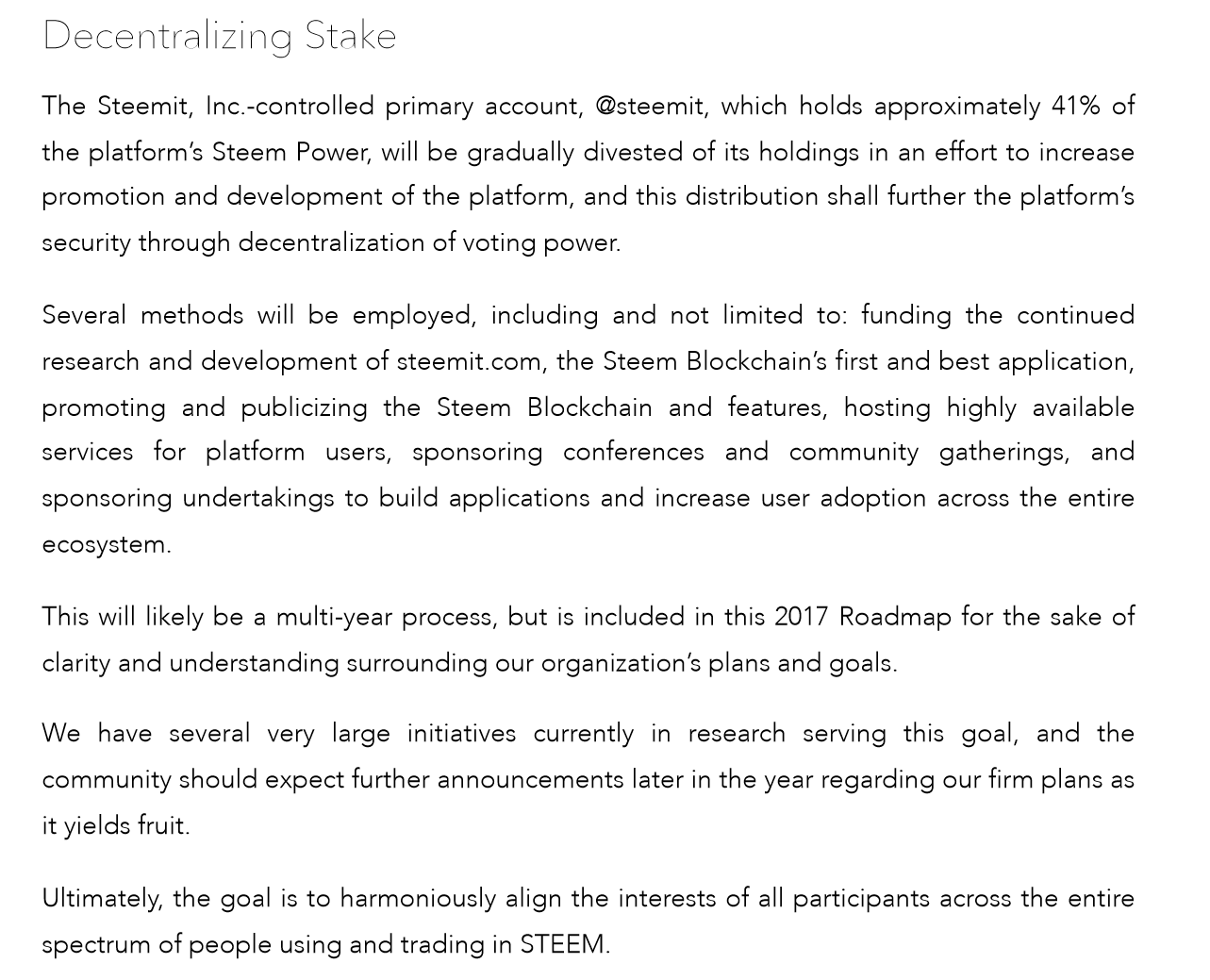 What Justin Sun purchased was part of, or all of the STEEM that are related to Steemit Inc. The US company.
He may have purchased other STEEM also, I personally do not know.

However, with this acquisition the original “ecosystem” that justified such a large number of STEEM to be in accounts that are managed by one company and that were not earned in accordance with the current ecosystem of Steem, well, let’s just say it has been put into somewhat of a questionable status.

From what has been put out there into the media, it has been made clear that the acquisition of these STEEM, was not all, Justin Sun, (Tron) also purchased Steemit Inc. the US based company.

The FUD comes into it when the question of the STEEM and their actual original purpose is brought up.
All this FUD is a result of the situation faced now that the “ownership” of these STEEM has changed hands. Now that the company that was supposed to play such a vital role in the Steem ecosystem is owned by a person who is building up a different blockchain and ecosystem.

It is clear to all those among us that this “handover of STEEM” was done as per the laws of The USA and not in accordance with the Steem ecosystem. As it is clear that the governance of Steem is a voted in representative model, decided upon by votes of stake holders (owners of STEEM).
Delegated Proof of Stake (DPoS) gives the weight vote for up to 30 representatives to be voted for by each person who owns STEEM.

A few months ago a “Steem Proposal System (SPS)” was coded into the Steem blockchain.
The purpose of this SPS in many ways effectively made Steemit Inc. redundant in nature and decentralized the further advancement of the Steem blockchain.
However, the STEEM that were managed by Steemit Inc. were not transferred into the SPS fund.
That is obviously one of the biggest mistakes made recently. After all, those STEEM were there for that exact purpose and at the time were when the Steem blockchain was commenced, the founders thought that a company to do the job would be the best way to go about things. However, as time moved forwards, it was made clear that “a company” can’t effectively serve the needs of a decentralized community such as the 1 million+ accounts/ “xyz” hundred thousand people who are registered on the Steem blockchain.

So where does this now leave Steem, STEEM, SBD and the hundreds of thousands of people who have accounts on Steem and own STEEM and are still using the Steem blockchain?

We do know that the technology of Steem has to date handled well over the total number of transactions that occur daily on any banking system, this was not only “tested” but actually proven in action some time around Decemberish of 2017.

The Steem ecosystem envisioned tokenizing the world of social media with its unique economy, while the ecosystem of Tron is somewhat similar to that of Etheruem.

These are just some of the major differences that most average people can clearly notice after looking into the basics of each individual venture.

Likewise, one can claim that Tron is fast, however if looking into the needs of the Steem ecosystem it is clear that there would most likely be issues. Speed, scalability and add to that the above listed financial/economical issues. So the “posts” out there talking about some sort of “swaps” are definitely not based on tech needs.
My guess is that they are based on “marketing” which in the world of blockchain must be backed with real advice from the tech experts. Otherwise it is not going to help matters any as far as the FUD is concerned.

What I can say is that we are now in a position that we should never have been in. The existential security of Steem is at question as a result of the above mentioned “acquisition”. Which puts DPoS to the test.
What shall happen as a result of all this, idk.
Will Justin Sun honour the terms and conditions under which the STEEM he purchased was produced and put into the accounts that Steemit Inc. had access to?

I guess only time will tell.

One thing is for sure.

Steem, its governance and the entire ecosystem are being tested right as we speak.

The mistakes from the past are now haunting all of us who have an interest to see the existing Steem ecosystem flourish with all its potential and capabilities.
Rare are the blockchains out there which can compete with Steem in any fields.
How will all this affect the market demands and prices of STEEM and SBD?
Idk.

“The markets are a beast of their own!” (my answer to crypto prices).

Somewhat I have the feeling that Justin Sun was maybe not aware of ALL the details involved with this acquisition, yet then again, maybe he was.

Either way, his actions shall speak louder than words and everything will be made crystal clear in the very near future.

They added an update:

Editor’s note: This editorial was written prior to an announcement from Andrew Levine, Steemit Head of Communications, who said, in part:
”[…] there are no hard or immediate plans with respect to the Steem blockchain and the migration of Steem applications to the Tron blockchain.”
Levine blamed the confusion on the fact that his team had not yet fully planned announcements with the Tron team. The following article can still be read in context, with the understanding that it’s fully possible for Steemit to abandon the Steem blockchain in the future.

I really liked this post. It wasn't laden with the false enthusiasm presenting in a lot of the junk on Trending.

Accordingly, I gave it a full vote and hope it does happen to make it higher up.

My posts have been satirical in nature but it's not like ole Sunny boy hasn't earned it imo.

Have been known for saying it as I see it.

PR and marketing are not necessarily my strongest points.

The post came about as a result of me thinking about all the disinformation out there and the conclusion is simply that most of it is a result of a lack of information.

Yet, then figured "How to present the information in a simple straight forwards way for every average person using one of the UIs?"

and there it is.

Nicely explained... especially marking out the different usages of steem and what they mean exactly. 😎👍

Lots of people still don’t understand the freedom of STEEM... ;)

There are plenty inside the ecosystem that can't make the difference betweem Steem and Steemit. What Sun might plan on doin with his famous transition and Steem Tron is probably to eliminate free transactions that Steem currently offer and tax everything. I doubted he knew what he bought but I guess he does. Still a lot of FUD around Steem.