The last updates to the bot improved the overall post quality on dMania a lot. dMania supporters do the curation on dMania. Supporters who have a fair voting distribution, get authorized and take part in the curation process.

To improve the fairness and prevent abuse, I have made some additional changes to the bot.

Posts can be selected by the bot with a post age between 6-24 hours. That gives supporters more time to vote on posts.

The upvotes from the bot belong to the whole community. The upvotes per user are limited. Some users try to get more upvotes by using multiple accounts. I have blacklisted anyone who tried to do that, but it is not enough. To prevent this kind of abuse, I have set a minimum reputation of 50 for bot upvotes.
There is no account verification on Steem and it is not possible atm to prove that one account belongs to one person. The closest thing to check if an account is real is the reputation. The reputation has to be earned by actively posting and receiving upvotes from other users. I can't be faked that easily.
Users who try to abuse the system and get blacklisted can't just switch to another account, which makes blacklisting bad actors a lot more effective.

This change means that new users who just created an account can't get upvoted by the bot. I was a bit reluctant to add this change, because it makes it harder for new users or discourages new users. Nevertheless I think it is necessary. Reputation isn't tied to your Steem Power and even minnows can get a high reputation. New users have to engage in the community and build their reputation, before they can get an upvote from the bot.

dMania supporters need a minimum reputation of 50 to get authorized as well. I have increased the minimum Gini-Simpson-Index (Index that measures your vote distribution) to 0.975.
There is also a new requirement to keep your voting strength above 50. This will limit the amount of voting that supporters can do.

You can check your vote distribution and your Gini-Simpson-Index on https://dmania.lol/vote-diversity. The check for bot curation shows only the relevant votes for the bot curation. 
If you have any questions join our Discord server

Please upvote, post and comment on dMania to support this project. Every single upvote counts. You can contact me on Discord if you find any bugs or if you have ideas for new features. Please resteem and upvote this post and tell everyone you know who likes memes about dMania. Follow @dmania and @zombee to get the latest updates about this project.
steem steemdev meme dmania funny
4년 전 by zombee65
$71.47
115 votes
댓글 남기기 59
Authors get paid when people like you upvote their post.If you enjoyed what you read here, create your account today and start earning FREE STEEM!
STEEMKR.COM IS SPONSORED BY

I guess holding off my curation was not a bad idea as it won't have an effect in the new system. I'm hopeful Dmania will better with these changes .. time will tell.

Vote for witnesses @emrebeyler
Dont be hesitate to vote hurry up guys.

No room for abusers on Dmania. It's either they abide by the rules and work hard or fuck off.
I must commend your efforts @zombee, Dmania is such an amazing project.

Minimum reputation of 50
is not a bad thing at all imo. It has much advantages and people who post good memes will also get some upvotes which will result in good reputation. The thing is, that new steemit-users should also be active on steemit to reach the reputation of 50 as fast as possible, but with dmania, steem, supporters and the users growing there will also be more upvotes.
The higher gini-simpson-index also forces it. Fine for me

The best thing is, that upvoted memes and memes that are too old do not count. People can not abuse the system in that way and also have to be more active, which will result in higher rewards and upvotes.

Really like the updates and will be the next big step of improvement in the right direction for dmania!

Very good changes, congrats. The changes are better and better. Some people will say that they don't have a change to do get the vote because their rep is low, but I think this was the only way to prevent some things and also the vote diversity thing is much better than the rep thing. Also they can build their reputation on other platforms fast if they want to and it won't take much time. Resteemed

Excuse me, but I did not understand about "There is also a new requirement to keep your voting strength above 50. This will limit the amount of voting that supporters can do. "

To prevent this kind of abuse, I have set a minimum reputation of 50 for bot upvotes.

Well RIP me then. I understand why you would do it and it sucks that because of abusers now way many more will suffer.

Also on a side note does anyone know when/how the rewards from delegation work? It shows i got some on the site but i don't see it in my wallet.

New system really awesome especially 50+ reputation so the way we can figure out how long and how true they are been with community .. like the same crazy dude destroyed my hard earned reputation 52 to 51 back.. because of you got Upvote from @dmaniabot .. we got a do something about it @zombee. .. you're doing a great job man .. appreciated

not good for those who are not in power

How can I keep a voting power over 70 if my meme posting account has around 100 SP and no voting bar? That isn't really fair in my opinion. Also new users will have a very hard time understanding all the new rules. There should be a FAQ somewhere.

Sorry but your explanation didn't enlighten me :) In my mind voting power and voting strength are connected. If I cast votes that have more voting strength my voting power will go down, or at least this is how I understand it.
Regarding FAQ I should have been more specific: I was referring to a separate tab containing the FAQ to make it more visible. Anyway the main idea is that all these rules seem kind of complex even for me to be honest, for a new user they might seem even more so.

As a normal user posting on dMania, those changes don't have to bother you. Those changes are only for supporters who want to take part in the curation process.

If you want to get authorized and be part of the curation process here is the easy explanation: Vote fair and don't vote too much. That's it.
Some users wanted to see the metrics behind the system. Normally I would hide stuff like that to keep everything easy and simple.

I thought that I had to keep my voting strength above 70% in order to qualify for a bot upvote as well as an index above 0.975

@calatorulmiop check here https://steemnow.com and enter your user name. This will show you how much voting power you have left and how long it will take to get your power to 100%. You only need 70% for Dmania. Even if you do not have much steem, you can maintain a high voting power. I can usually vote about 10 times a day without my power going below 75%. Hope this helps.

Just upvote fair and you will get there. If you check your vote distribution on https://dmania.lol/vote-diversity, you will see that two users (including you) get most of your votes and they others get a lot less.
Ofc upvoting too many posts at once will drain your voting power.

@zombee you should allow the voting strength upto 50 percent. Else its very difficult to curate and maintain the index, without doing anything else other than dmania.

I hope everything will be better for dmania family .thanks for the great work @zombee

I believe you will be more beautiful this way.Thank you. 🙏

waoo such fantabulous efforts and ideas from @zombee you're appreciated. This new rules will abdicate spammers on dmania and also prevent them from joining (rep =>50).

I think these are really solid changes. ty

Thanks for the explanation

If only you could fix that mobile safari bug. :)

Sry I don't have access to an iPhone atm to fix it. Will try to get one soon.

Great changes @zombee this should help a lot , thanks for the update ! upped and resteemed to spread the word !👍👍👍😀

@zombee keep up the good work and keep us updated!

@zombee @dmania I am pissed off about your changes rendering my account dedicated only to memes unfit to participate. And my account is not included in voting, yellow most of the time, I´ll stop my delegation from 3 accounts, two of them rendered worthless anyway by your rule changes. If my @elgeko account doesnt show up as green until tomorrow i will stop my 5000SP delegation. And if it shows up yellow in the next 31 days again i will also stop my delegation because I am sick of seeing it yellow and dont know why. Have a great day, get your shit right so that it is fair and easy to support dmania not a miracle. Thank you.

@zombee @dmania . . . . every parameter is within the range, someone fucking tell me whats wrong , thank you

Gini-Simpson is not important anymore?

Your vote-diversity is not good. You need to reach 0.975 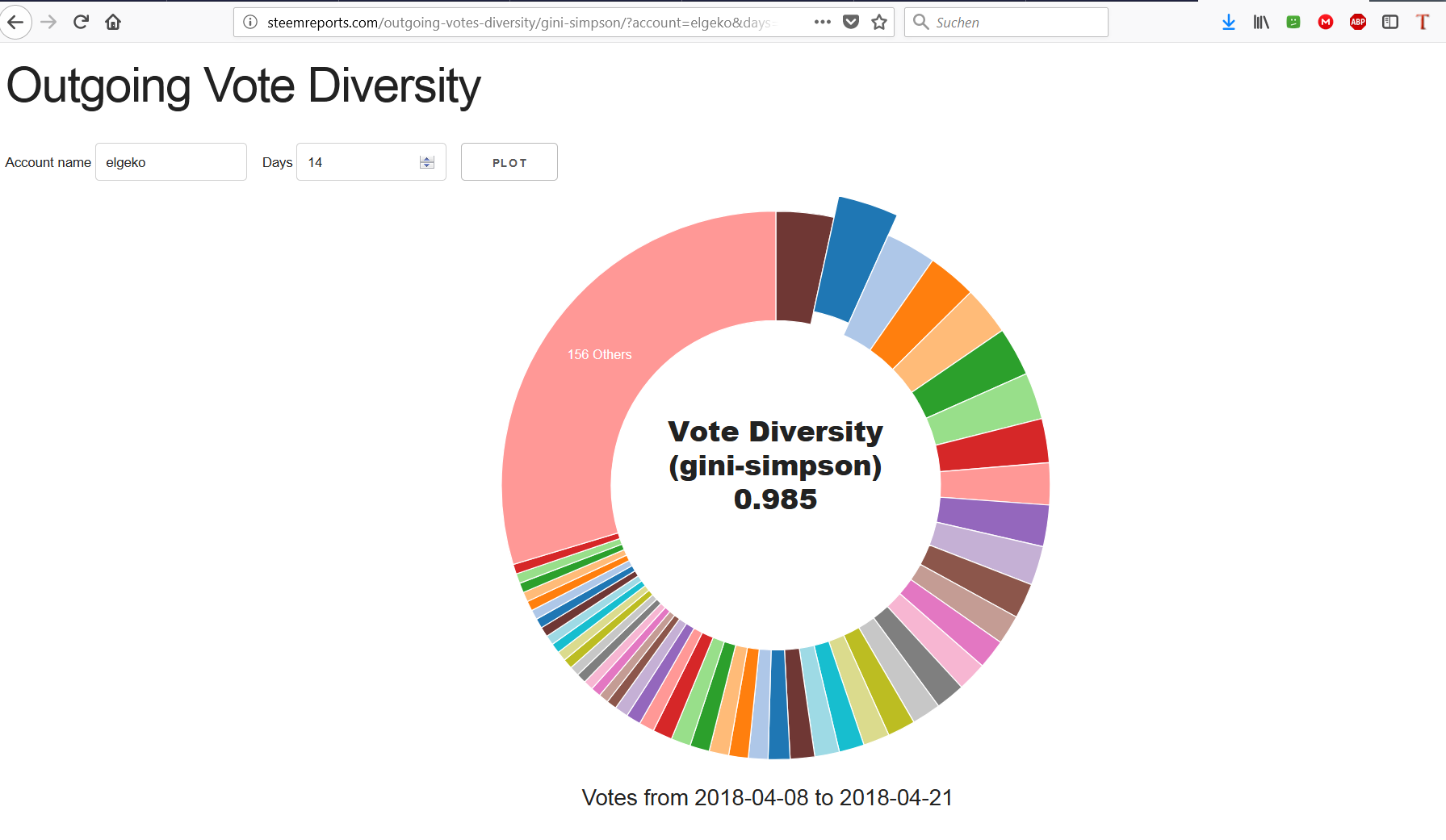 maybe I am too old and too stupid to get it but my vote distribution is better than 9.8 since days or weeks. And if I am offline for 3 days because i go to the hospital, when i come back and will be yellow again because I just wasnt here to vote. you know what, I half the delegation amount now i undelegated my @meme-deluxe (rep47) account which was created to deliver high quality fresh memes without overusing my artist/digital producer account @elgeko. If it turns out am really to stupid to get it right I´ll undelegate the rest if I cant manage to stay in the green zone. So you guys have no stress with grandpa geko

That's the problem you're using another vote diversity. I sent you the link before:
https://dmania.lol/vote-diversity OK, I am clicking now 51% random new shitposts just to get the vote distribution right. Bravo what a great achivement. no curation at all- just click a lot on random new crap shit and everything is fine and green. .
Anyway @lifeaef thanks for the link and informing me about the new set of rules, the new vote-distr-graph, the rep-change, the voting power is 50% today not 70% like announced 3 days ago is that correct?

It was nice to have you with us. Take care :D

Thanks, I am tired of this but thanks

Amazing change! this can create justice with a 50 reputation to get the authorization but keeping Voting Power 70% is a bit difficult as we are not likely to just upvote post on dmania. we also need to upvote post on other steemit. but this can prevent abuse because they have to keep their voting power to become autorization supporters. you did a wonderful job! @zombee
Cheers

I have lowered the voting power requirement to 50

but keeping Voting Power 70% is a bit difficult

Yes, I agree, especially if the votes need to be at least at 50% right @zombee?

No you can use any voting strength you like and will be correctly evaluated.