Road to SteemFest - One post to write them all and in the blockchain bind them. You have one week to catch up on the TEN topics, that's going to be a hell of a posting week! Let's get the Steem Fest hype full force!

A Trip down memory lane

So far, I’ve had the pleasure of attending every SteemFest.
It’s always been a different and exceptional experience.
We sailed across the channels, visited palaces, castles, and ate dinner in a salt mine. 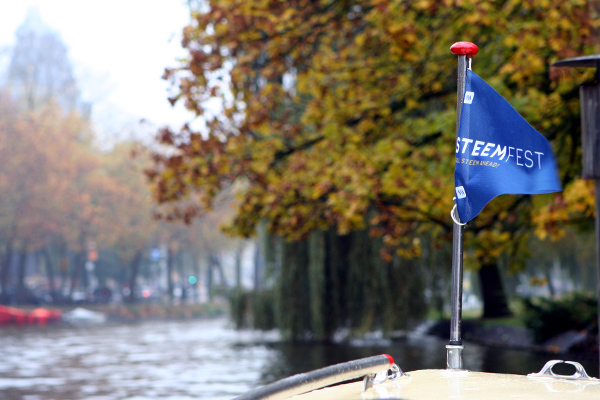 That’s easy.
Since the first SteemFest in Amsterdam, I’ve planned and wanted to attend the next SteemFest, wherever it was.
When you know that the next SteemFest is in a year and you’ve already put it on your calendar, you have a much better chance to make arrangements to be able to go.
Any doubts?
Well, there are of course more important things in life than SteemFests, and no plan is good enough to factor in unexpected events.
Other than that, I have no doubts.

- Bilbo Baggins, The Fellowship of the Ring, J.R.R. Tolkien

I surely miss many of those I had the opportunity to meet during the SteemFests in Amsterdam, Lisbon, and Kraków. I will not list their nicks, because I would have to arrange them in some order, and how should I decide what order that should be? What if missed someone?
If anyone feels I’d like to meet him or her, this is most probably true! :)

The list of attendees is probably already set, but hey it’s a small world, and exclusive discount codes for SteemFest flights are still there for you, buckle up and surprise us!

Judging by my experience with the previous SteemFests, I know that I’m enjoying meeting people I wasn’t planning to meet.

This time, it’s a lot more expensive for me to attend SteemFest, because of the distance, and the cost of the flight tickets is huge part of the planned expenses.

There are no direct flights to Bangkok from the nearest airport. There’s only one direct flight option from my country, and it goes to Bangkok once a week, but it’s not only a waste of money (it’s at least twice as expensive) but also a waste of time, because in order to attend to SteemFest I’d have to be away for 16 days… and that much time is what I can’t afford.

I use the economy class, because the difference in the price of economy and business class tickets is ridiculously high, so I see no difference between being miserable in economy class and a bit less miserable in business class.
Well, I have to admit that it's slightly better to wallow in misery in First Class, but the price of STEEM is far from $100.

In order to reduce the SteemFest-related travel expenses, not only for me but also to all steemians, I spent over a month contacting dozens of people get exclusive discounts for flight tickets (up to 15% or sometimes even more depending on the situation). Unfortunately, none of those discounts applied to the route I chose, but I’ve received feedback that they’ve been helpful to many people.

For convenience, I usually book a room in the “official hotel“ of the event, and I take advantage of early booking offers (and low prices).
No breakfast included. I can get that ad-hoc if/when needed (see “Expenses in Bangkok”).

I’m not a minnow, obviously, and Ithildin tickets exist for a reason. ;-)
As I’ve already said, if you know that you’re going to SteemFest many months in advance, this helps you make all the necessary arrangements.

ATMs in Thailand will have high (220 THB) fees on withdrawal.

Depends on your bank, card, amount you need it might be still better than exchange on airport.
Do your own research.

What I do for Steem I do for a living and apparently I’m not that bad at it so I can afford to pay my SteemFest expenses once a year, especially because SteemFests have been a permanent item in my calendar since 2016.
As I’ve mentioned, instead of funding my trip by posting dozens of SteemFest related posts I would rather help others by supporting @t-r-f.

Bangkok and Thailand in general are not new to me. Chian Mai, Thailand, we were still using analog camera back then This time, I will not have too much time to go sightseeing. Those who have already attended SteemFest events know that time tends to pass very quickly during SteemFest.

Speaking of which... can you tell the difference? This time, when I’m in Bangkok I want to see what I haven’t seen there before - the SteemFest :-)

Are you going to Bangkok because, like me, expect to find a crypto babe wealthy as hell and win her heart?

So you want to attend Steem Fest 4 because you need funding for one of your projects?

Do you want to go to Thailand so you can meet a whale who can get you out of anonymity?

Is this trip your opportunity to go to a new country and explore its touristic spots and get to know the local culture?

For a witness it’s a way to stay in touch with what’s going on around the Steem Platform.
Who are our users, developres, and investors? What are their problems, needs, and expectations?
A chance to talk about technical challenges related to Steem and blockchain technologies in general.

For a steemian, it’s a lot of fun and the pleasure of meeting old and new friends.

I’ll be travelling to Bangkok via two cities that have already hosted Steem Fests - Kraków (SteemFest 2018) and Amsterdam (SteemFest 2016).
I hope to reach Bangkok in 22 hours, which means that I will be travelling at an average speed of 472km/h, but the last several kilometers will be a bit slower due to the traffic jams in Bangkok ;-)

Three truths and one lie

Fear of the unexpected.

During such a long journey there are a lot of things that are beyond my control and may affect my plans:
Delayed transport to the airport.
Delayed flights.
Cancelled flights.
Delayed baggage.
Damaged baggage.
Lost baggage.
Strikes.
Civil unrest.
Weather.

steemfest roadtosteemfest blocktradescontest thailand bangkok
작년 via
t-r-f
by gandalf58
$36.28
283 votes
댓글 남기기 25
Authors get paid when people like you upvote their post.If you enjoyed what you read here, create your account today and start earning FREE STEEM!
STEEMKR.COM IS SPONSORED BY

The difference is that 2017 is a colored version :) Have a great trip. I won't be there this time, but it was cool to meet you in Krakow and I'll try to get to other events.

See you again my friend.

Wow! All topics in one post!! I love the picture from Ayutayah with Buddha in the tree!! Makes me wanna go there! Last time we just went through the city hitchhiking to Sukkothai. Im glad you are not afraid of the Poker game ;) Gives me faith haha. See you soon!! - Monday I am on my way. PS: I am sure you are an awesome Singer!

I'll say hello this time, last year I did see you but didn't.

Funny is I never worry about unexpected situations such as delays, baggages, etc. My worry is more plane and boat will crash.

I can swim but when it comes to flying.... I don't think I can call for eagles if something happens with plane.

So I think all of them are true :)

Ohhh, come on. I am sure you can call eagles if you will have enough time for it, but the problem is I do not expect that they will arrive ;-P.

AND..
stroke, arrests, stomach upset, other surprises
BUT ALSO:
adventures in trains 😎, nice postcards 😍, and of course unique memories 💙

I prefer not to have adventures on trains. :-)

I know, I know.
but what you don’t do -for wild memories and nice frame in the picture 😎

Congratulations @gandalf! You have completed the following achievement on the Steem blockchain and have been rewarded with new badge(s) :

The 22-hour flight is very long, but I look forward to seeing you:D

@gandalf, one of your Steem friends wish you a Happy Valentine's day and asked me to give you a new badge!

To find out who wanted you to receive this special gift, click here!