I came down this morning to see a dumpling-making delegation in the kitchen. I’m the sort of person who won’t thrive in a working kitchen. The reason? I like my space, peace, and order whenever I cook. Since I had to prep my dish in a stressfully-messy environment, the photos are few and far between.

Eat A Potato Mountain in One Bite Potato, rosemary, butter, salt, and high-quality olive oil always spell success for my tongue. The addictive rosemary potatoes that I regularly make don’t look attractive enough to belong in a SIC entry. I wanted to use similar ingredients but present them in a more refined manner. 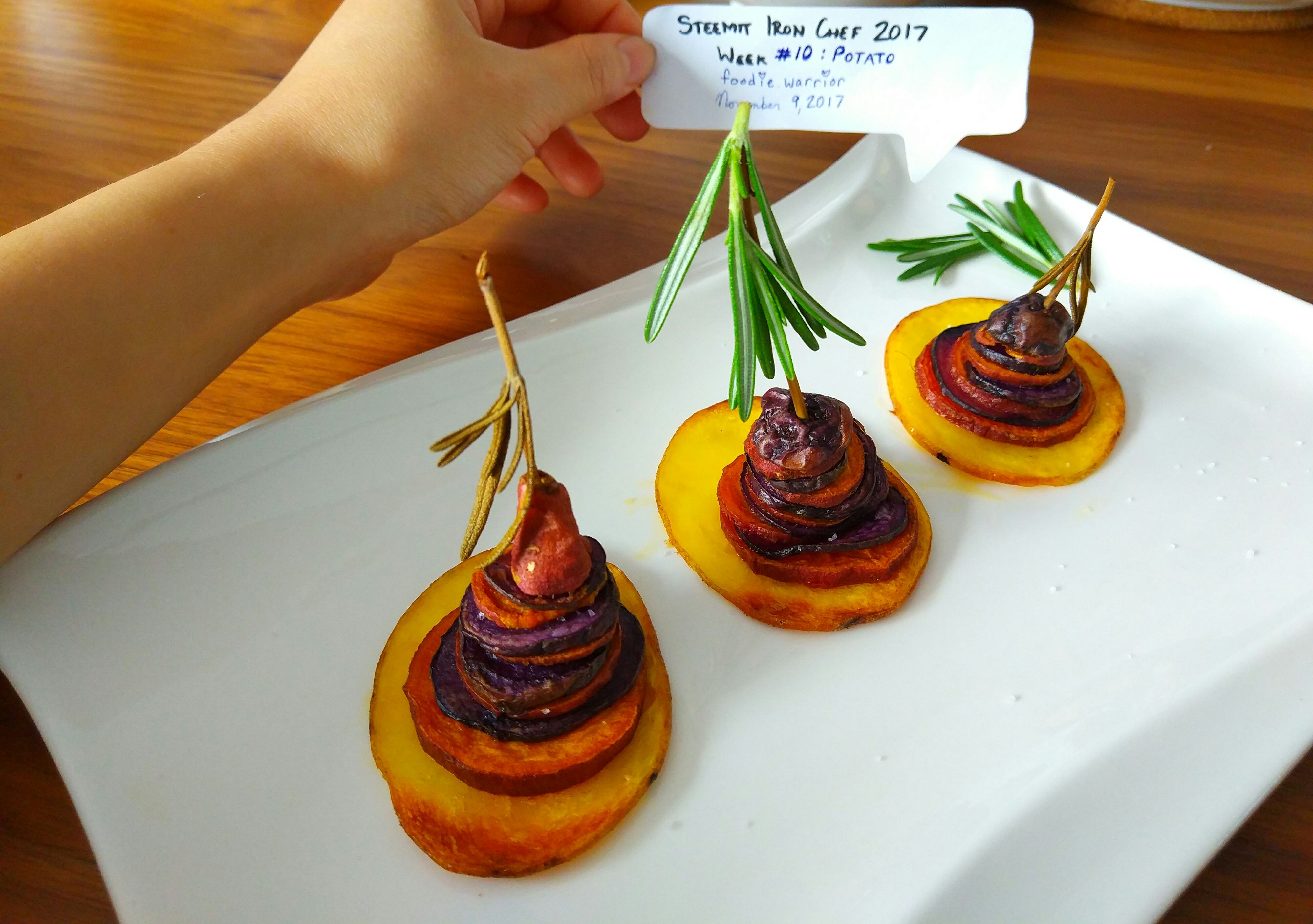 Now, the ideal thing to do would have been to make a trip to the grocery store to pick out uniform potatoes that could build a beautiful potato mountain easily. A look into our potato drawer revealed that we already had three types at home — albeit all oddly-shaped ones!!! I didn’t want to purchase more potatoes when we had so many, so I simply made do with slicing bits from suitable parts of the potatoes according to my needs.

The leftover bits? I scattered around the tray and drizzled with more seasoning to make homemade oven-baked potato crisps for the rest of the family to enjoy. How to Make the Potato Slices

Wash and scrub all the potatoes. Slice in thin slices. 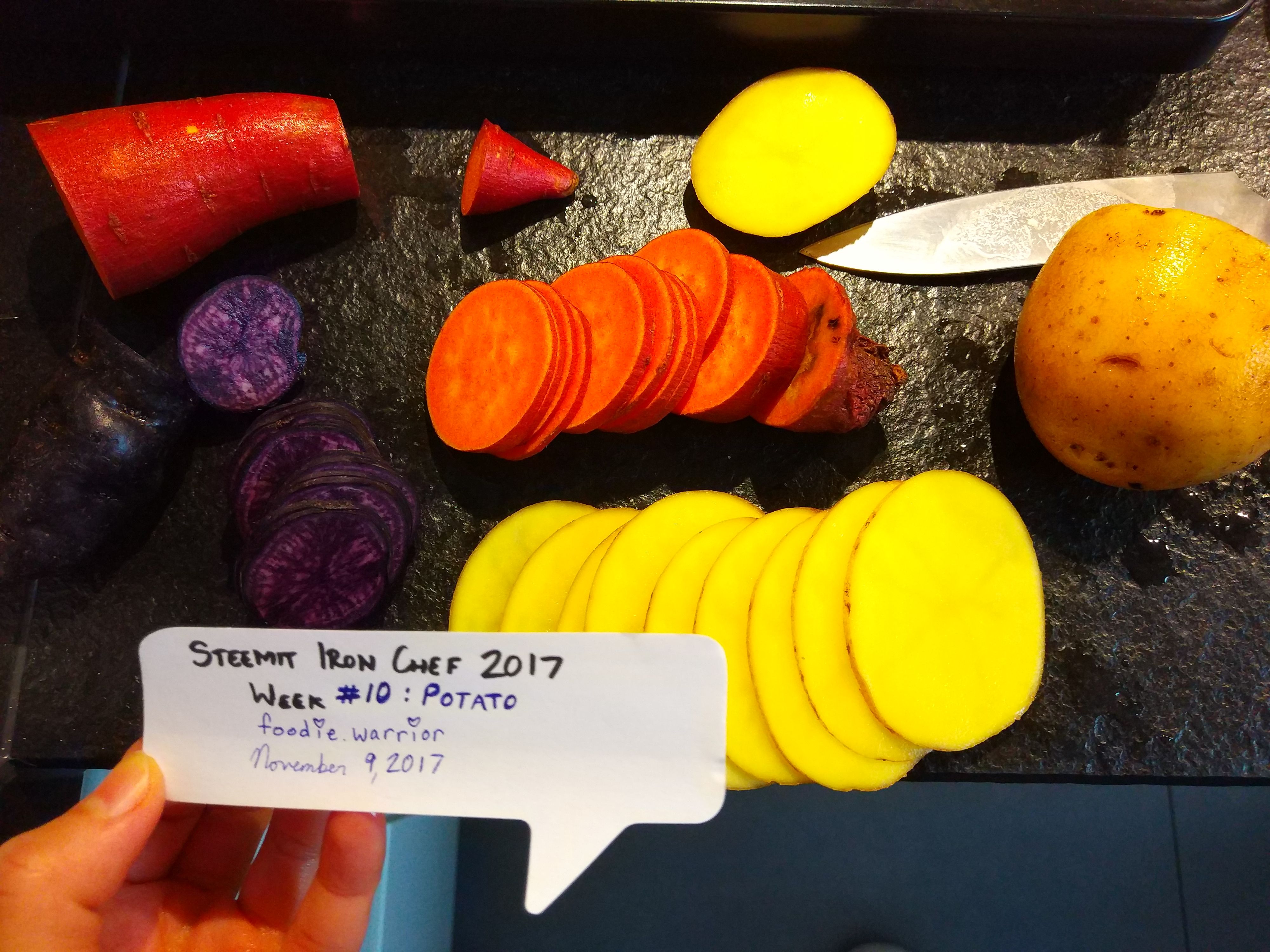 Each potato slice was brushed with an olive-oil and butter combination infused with fresh rosemary leaves and seasoned with salt and smoked paprika powder.

Then the stacks were assembled and stabbed through with a metal skewer. A fresh rosemary stalks was inserted into each hole to hold the stacks together during baking.

Ingredients Used in The Seasoning How to Make the The Seasoning

Combine all ingredients except for the Rosemary Stalks. Microwave at short bursts till butter melts. Mix together.

Brush the mixture onto all the potato slices. Assemble potato stacks, picking a large slice for the bottom and progressively picking smaller slices as you build up. The goal is to build a pyramid form with the stack. 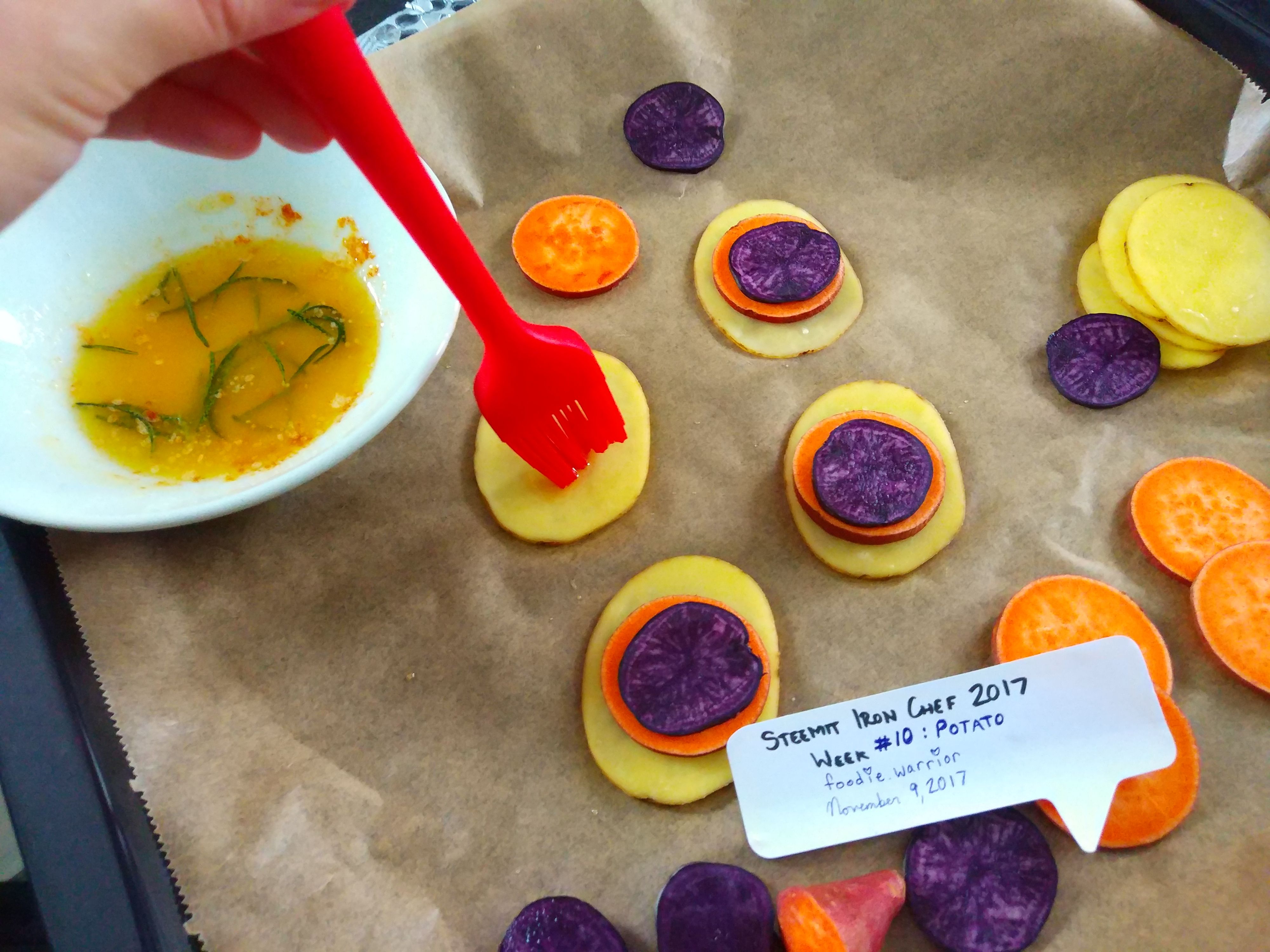 After the stacks are assembled, stab a vertical hole into each stack using a metal skewer. Insert a Rosemary Stalk into each hole and trim the top using a pair of scissors. 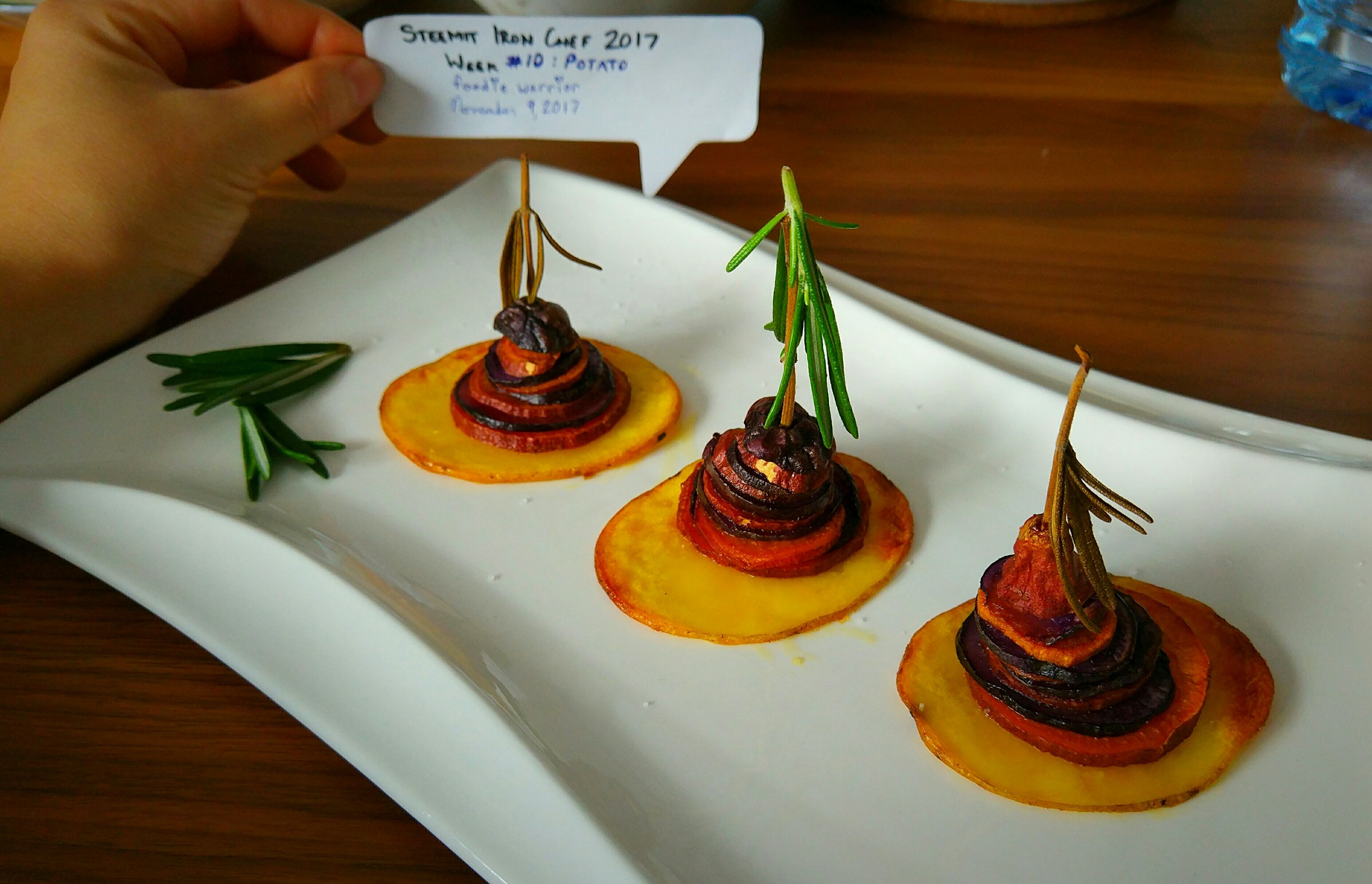 steemit-ironchef food contest recipe foodphotography
5년 전 by foodie.warrior56
$2.69
51 votes
댓글 남기기 10
Authors get paid when people like you upvote their post.If you enjoyed what you read here, create your account today and start earning FREE STEEM!
STEEMKR.COM IS SPONSORED BY

lovely towers ... I know what you mean I also prefer to be alone in the kitchen when I cook, unless I am cooking with my daughter ....

These are gorgeous, and they remind me of something out of a dr. seuss book! The colors and arrangement is beautiful!!

They are too pretty to eat! I love potatoes so I can easily see me wolfing down these tasty mountains. Blue potatoes? Never heard of a blue potato.

Ohhhh! So beautiful! The first time i see the potato mountain with different color, this work full of creativity, good luck my friend.

Could I order two those beautiful mountains please?

So many vibrant colours from so few ingredients, it looks divine :-)

These little mountains look so cute my friend! I am always amazed by your creativity...amazing!
I am same like you btw...I love to have the kitchen only with me in and I can work in peace!