This was an exciting and competitive one!

The tournament participation is steadily growing for what I am grateful for. Thank you to everyone who came to participate and compete!

The prizes money was delivered! Congratulations to the winners!

@schamangerbert(HerbyW) returned winning yet another chess tournament scoring a total of 31 points which is record so far in our tournaments, however with the absence of his usual rival @krasimirkolev he may now have found 2 new very fine challengers in the face of @kooshikoo(Hattifnatten) and @greatwolf both of whom showed to be very strong and skilled chess players.

Congratulation to @schamangerbert(HerbyW) for winning yet another tournament lets see if he can retain the winning streak next tournament or if he will finally be dethroned.

@kooshikoo(Hattifnatten) in his 1st tournament with us managed to surprise us with very strong game and 2nd place finish with just 1 defeat out of 5 games. Winning majority of his games on berzerk mode and even defeating the eventual tournament winner in his last game, he definitely impressed. The only game that he lost was vs the 5th Chess Tournament champion @greatwolf. 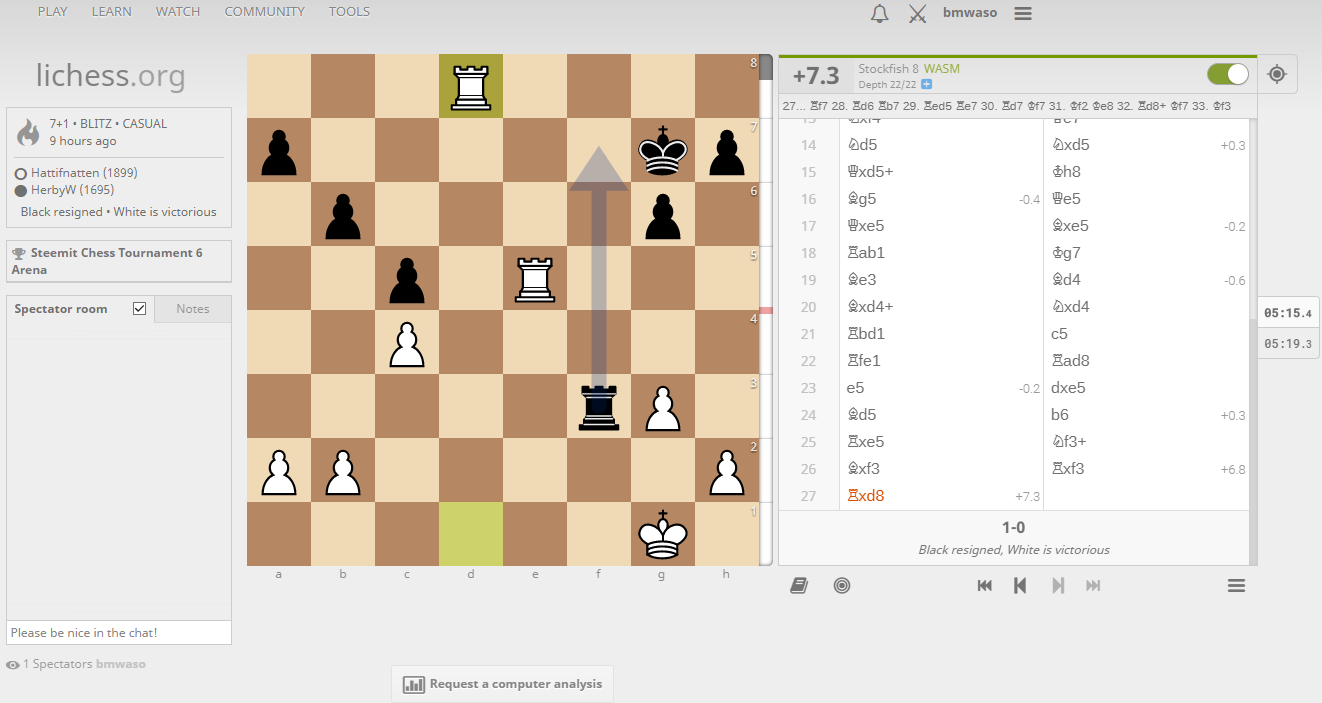 Aiming at the top!

@greatwolf once again showed that he is strong chess player and that he is capable of fighting for the 1st place every tournament no matter who is playing in it. After winning our last tournament, this time he finished on 3rd place but it could easily have been 2nd place or even 1st place again if he had more luck in the opponents draw. Out of his 5 games he lost only 1 game vs 2nd place @kooshikoo(Hattifnatten) and won vs @marty-art, @kooshikoo(Hattifnatten), @modnar and @bmwaso. @kooshikoo(Hattifnatten) with the whites trying the berserk mode vs @greatwolf. However he got surprised by @greatwolf and lost the match.

@marty-art and @modnar had some interesting games between them and @marty-art gave a fight to some of the big dogs, however he wasn't as succesful as last time. It was fun to watch you guys play. Hope to see you compete again in the next tournament. 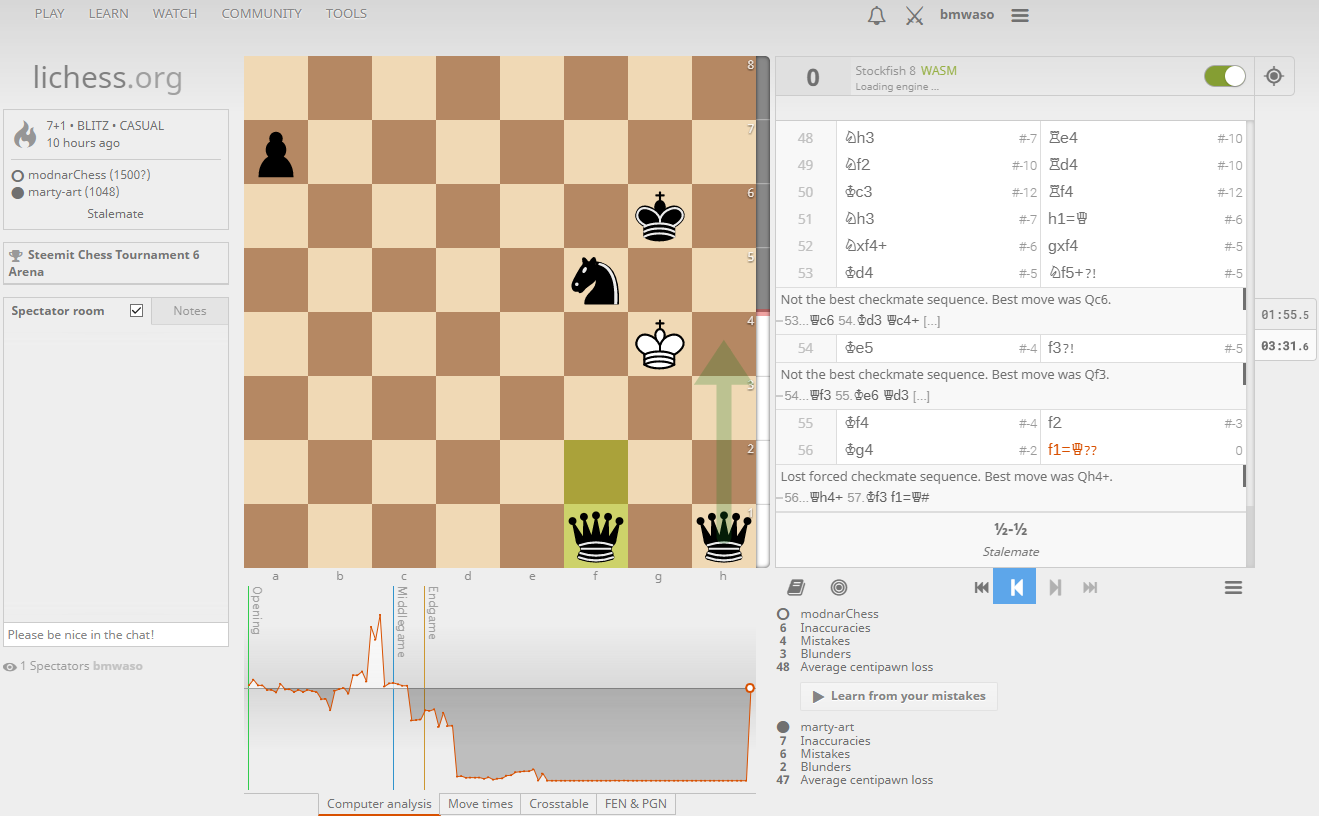 Another stalemate between @modnar and @marty-art! However this time it was @marty-art who couldn't finish the job even leading in every aspect of the game.

You may review all the matches HERE.

This tournament counted with 6.6 SBD prize pool! Update on the prize pool for next tournament will be posted the following days.

Any of the funds gathered by this post will be used to fund future tournaments & contests! I will be writing an update about next tournament soon, so stay tuned up!

A Special Thanks to @marty-art for Providing the Awesome Chess Pictures and to @schamangerbert for the Promoting and Financial help!

steemit steem chess blog contest
4년 전 via
chainbb
by bmwaso48
$1.33
13 votes
댓글 남기기 16
Authors get paid when people like you upvote their post.If you enjoyed what you read here, create your account today and start earning FREE STEEM!
STEEMKR.COM IS SPONSORED BY

Yep, was fun to play again! I have to say the time pressure gets to me - that explains my 1050 score at lichess - I've been playing too much blitz which I'm not all that good at, haha. But hey, it's the format of the game, long games take too much time. Looking forward to the next one, and thanks for the write-up!

I am the same. When I see how fast some people move I feel presured and then I make mistakes. But longer games would be harder since I guess most people dont have the time for it.

Thanks @modnar, glad I'm not the only one around here. But yeah, I understand a tournament has to go quick and I'm willing to play it like that. And I will keep doing so if it fits in my schedule. But there's nothing like a long, afternoon or evening single match, right? :)

Looking forward to compete with you again.

Thank you so much for this great report @bmwaso!
I think it would be fair when you take the steem from all the posts for you and only the SBD for the price pool, your work has to be worth something.
Nobody will be against that!

Yeah thats what I am trying to do. Still I get around 60% of the Steem for me, so it's fine I am earning something and if this grows in time I will earn more :)

I agree with that, your work is of value too, @bmwaso!

Thx Still I get around 60% of the Steem for me so is perfectly fine for now, I will wait to see it grow so I can get more :)

No tournament this saturday? I am writing the promotion post now.

Sorry I was away for the week. Didn't had the possibility to write, if you promoted it for this saturday, I will make announcement in a few hours for saturday 19:00 GMT but if you haven't promoted it for this time and date I prefer to make it next Saturday 19:00 GMT so I can promote it this week. Let me know what do you think are the best options. Or another possibility is to make it this Sunday 19:00 GMT and so I will have time to(promote it) and make 2 or 3 posts tomorrow about it. Let me know what do you think about it.

Thank You a lot for the promotion :)

I had no time in my post. You decide when to make it, then I replay to all comments again with the right time. That is more effective then a new post for me. The reply to a comment is shown in the home tab, the new post is quickly going away. And some I may contact in the chat as well.
Saturday or Sunday is good for me. Or next week. (Resteeming should be not a condition, it may hinder a bit)