Thank God Its Friday! So, I am keeping my analysis short and terse.

In the comments of my post regarding Steemit's Churn rate; users @dune69, @igster and @bronevik were interested about the distribution of vesting power with @dune69 particularly mentioning about VP distribution being a replication of the world's economic distribution. You can find their comments in the link below:
https://steemit.com/steemit/@dbdecoy/steemit-churn-rate-and-engagement-level-an-analysis

I have based my chart upon their suggestions to check the how Vesting power is distributed in the network. The data for today's chart was easy to gather as it involved pinging only the Accounts table for data. I am not getting into the 'identify/exclude the bots' debacle in this post. Primarily, because even the bots are the part of the network and have created VESTS. I am going ahead with the established hierarchy of users based on VESTS. New users can find the classification below:

Without further ado, below is the chart on distribution of Vesting Power in correlation with the size of the user base: 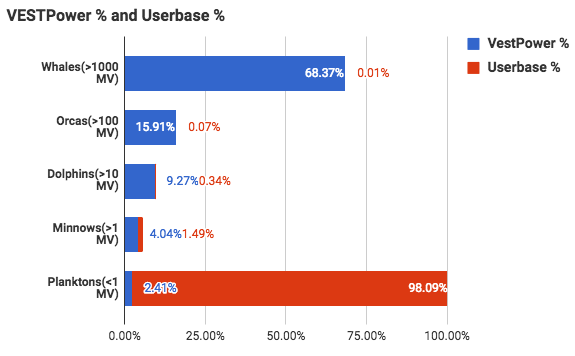 To compare the chart with the world distribution of wealth by population, I referenced data from Credit Suisse's data card, below is the chart we get from this data: The only inference I can think of is that Whales, Orcas and Dolphins are first world citizens with 98% wealth among them. Planktons' data looks like Africa's data. Minnows look like developing nations. Planktons form 98% of the user base having 2% of Vesting Power. Steemit is truly an oligarchy by numbers and wealth as of now!

I did a quick calculation to find the average STEEM power each user will have in its group.

Have a nice weekend!

steemit bisteemit stats technology math
3년 전 by dbdecoy53
$1.07
13 votes
댓글 남기기 18
Authors get paid when people like you upvote their post.If you enjoyed what you read here, create your account today and start earning FREE STEEM!
STEEMKR.COM IS SPONSORED BY

Top Steem Oligarch should vote this. I've voted, but my vote only worth $0.01:(
This hard work should earn more. BTW, may I use some of your data for my post and give my views from it?

You are always welcome to use this data. Not mine anyway, I am just querying steemsql.com 😊

This post has been included in steemitbc weekly rap. you can check it out here https://steemit.com/steemit/@steemitbc/steemit-blogger-central-s-rap-project

So the average SP of all the users is ~537 SP as I understand it. That would give it a worth of 8 USD cents.

8 cents for every vote would probably be significant in the developing world, and is quite likely a level that could be motivating for new users, and drive the exchange rate up...

Hoping for it to happen!

you have been busy. another good post. its good to see steemit data mashed with non steemit data.

Thanks! Had to study some economics for this post!

Just now noticed this post of yours when looking through mentions. I'll vote your newer posts instead to reward for your work on this.

You should do updates on this every 3-6 months or so to see where are we going with this.

Yes, I intend to do so. Need to see how the recent explosion in enrollment plays out.

If you are interested in knowing which users are bots etc. then have a look av @steemreports latest post, he has done a pretty good job already.

I will look into it after next week when I get a regular access to the desktop. Right now on the road.

How do I find out my MVests?

What does this mean and how are they acquired?

You can read about them at https://steemit.com/interest/@sigmajin/understanding-the-steem-economic-system-vests-sbd-steem-dilution-interest-and-all-those-crazy-things

That was extremely helpful...thanks for the link.

Congratulations @dbdecoy! You have completed some achievement on Steemit and have been rewarded with new badge(s) :