As you can see from the screenshot below, one witness, @complexring, is testing version 0.19.3 of the steemd blockchain.

The current version, used by the majority of witnesses, is 0.19.2, so that's a bit strange, because there was no official announcement of that, on either @steemitblog or @steemitdev accounts. Even stranger than that is that on GitHub the latest release is still 0.19.2. 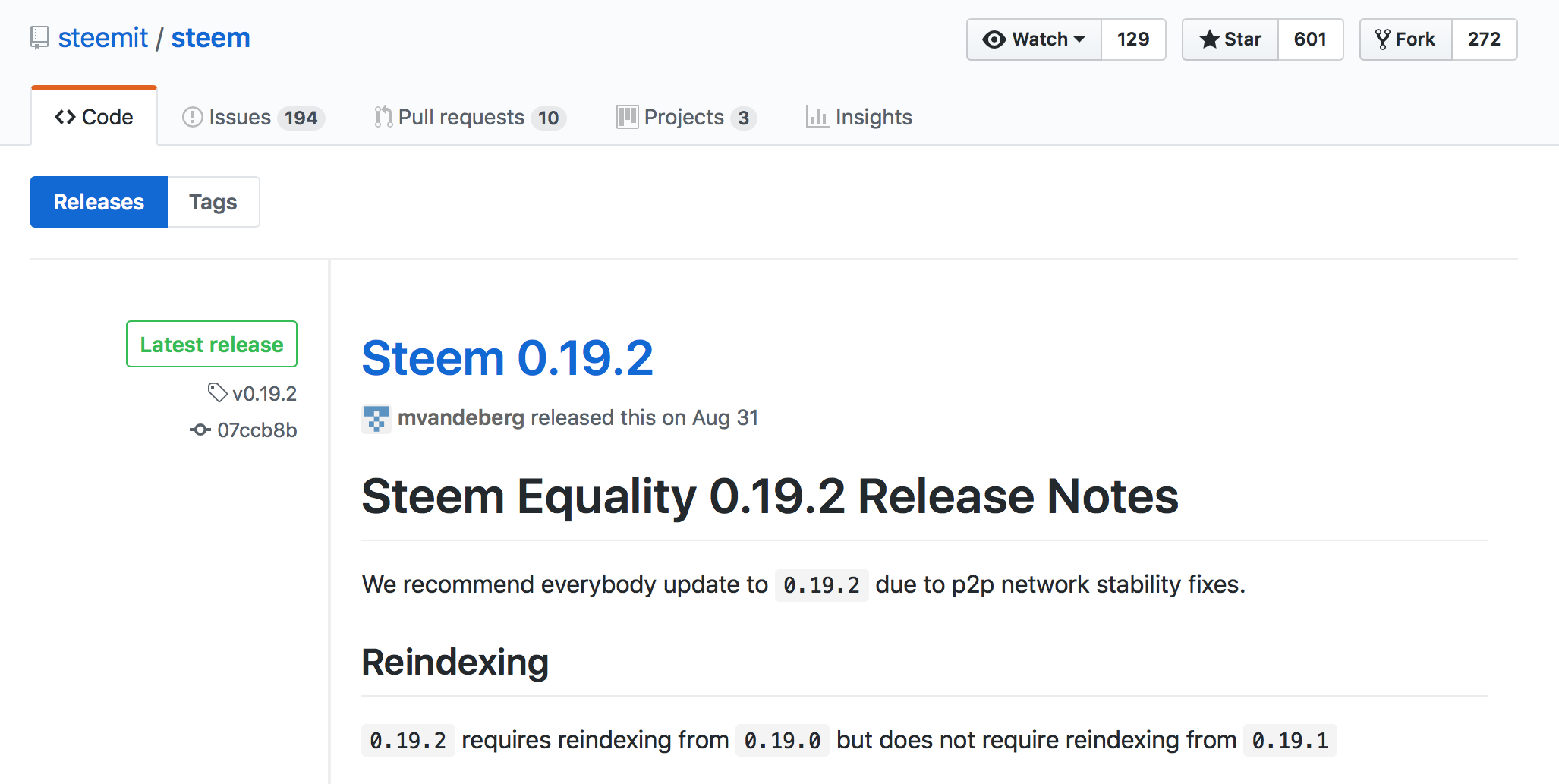 There are at least two options here:

Either way, I think we should prepare for hardfork 0.19.3 (which, as far as I know, won't impact end users, being a maintenance release with no significant changes).

You can also vote for me as witness here:
https://steemit.com/~witnesses

If you're new to Steemit, you may find these articles relevant (that's also part of my witness activity to support new members of the platform):

steemit steem hardfork witness
2년 전 by dragosroua74
$13.64
64 votes
댓글 남기기 17
Authors get paid when people like you upvote their post.If you enjoyed what you read here, create your account today and start earning FREE STEEM!
STEEMKR.COM IS SPONSORED BY

Why is the feed price variance so big?
Can it be arbitraged?
How does one buy or sell from or to a witness?

Each witness set up his own price feed and the final value is a median across all price feeds, so some of them are trying to arbitrage it by publishing big deviations.

You don't buy or sell from a witness, you can buy or sell from anyone in the internal market. The price feed doesn't represent the price at which the witness is selling his stake, just a price proposal, more like an oracle.

What prevents a witness from publishing an extremely exaggerated price feed?
What is the final median value used for?
What do you mean in your last sentence?

What prevents a witness from publishing an extremely exaggerated price feed?

nothing, other than potentially losing the support of those who delegated him (it's DPoS, not PoS)

What is the final median value used for?

For setting up the internal price of STEEM

What do you mean in your last sentence?

From your question I understand that you think witnesses are publishing price feeds for the STEEM they own, like an offer for selling their stake, and that is not true. Also, there is no price difference in buying from a witness or buying from a normal persons. Price feeds are like oracles.

Much of this information is in the white paper. I highly recommend to read that a few times to familiarize yourself with the ecosystem.

For setting up the internal price of STEEM

Internally, price is set up by witnesses. Of course, witnesses are weighing in what happens in external exchanges when they publish their price feeds. But there will always be an arbitrage opportunity if you follow the internal market closely. I saw gaps up to 30% between SBD/STEEM internal vs external, in both directions.

nice post friend, i think timely maintenance is absolutly essential for any platform. thanks for sharing

Communication is the glue of life.

Interesting.. I wish it was easier to keep up to date with the changes coming to STEEM and Steemit.

Do you happen to know what the status is of the update that will introduce communities and UI enhancements? Thanks!

For 0.20.0 there isn't much information, as it seems the efforts are on 0.21.0, which will introduce SMT. Hardforks are primarily related to backend, not UI. For UI, it's the condenser repo, where I see small changes are pushed to production without too much fuss, but no news on communities, so far.

This is good information, you always update the data to facilitate and analyze. This is a good job,@dragosroua

Congratulations @dragosroua! You have completed some achievement on Steemit and have been rewarded with new badge(s) :

Point releases (minor versions) are actually not hardforks - sometimes they include non-consensus softforks, but usually are not 'forks' at all.