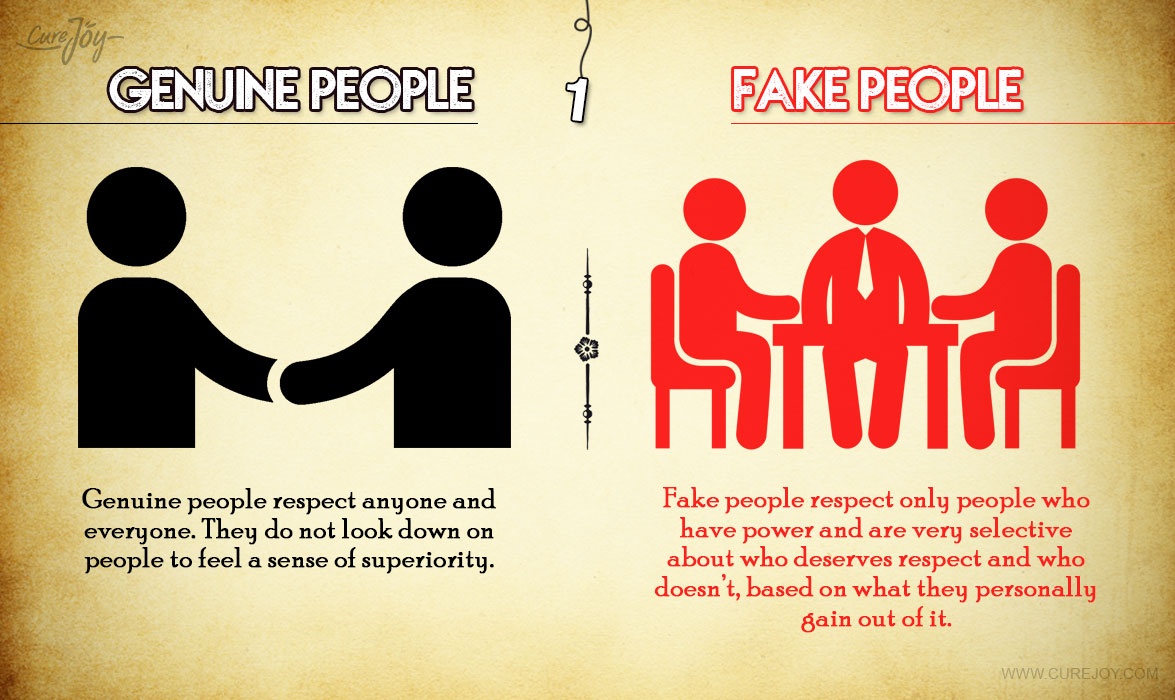 It's simple as that.

Men judge generally more by the eye than by the hand, for everyone can see and few can feel. Every one sees what you appear to be, few really know what you are.

The first method for estimating the intelligence of a ruler is to look at the men he has around him. - Niccolò Machiavelli

I'm not intending to write another novel-lenght blog. So, in a few short steps let's see how a genuine person looks like and the opposite.

Open to all genuine people.
Likes ideas and their development.
Enjoys philosophy, science, sports and other discussions.
Supports education in a positive way of gaining knowledge not a money-making certificate.
Shares knowledge.
Shares ideas.
Warns the others of the dangers.
Doesn't envy successful people in a harmful way.
Is successful by being genuine, no matter profession.
Doesn't undermine people's work.
Is not trying to get attention from wealthy and powerful people.
Is not avoiding poor people.
Likes a good laugh, and to provoke people reactions but in a sincere way.
Regrets for mistakes openly, and accepts them.
Supports the others in their pursuits of dreams/education/business.
Knows that's not a perfect person.
Accepts apologize and moves on.

Keeping secrets from everyone.
Likes only ideas from which can profit, even if it's illegal.
Doesn't like topics mentioned above, unless they will have some profit from it.
Enjoys being in a company of successful people, even though they aren't one.
Hates poor people.
Doesn't have any ideas, or steal them usually.
If they have ideas, they are mostly connected to frauds and illegal business.
Disfunctional family because of their behavior.
Does not accept apologize.
No regrets for mistakes. Continues to make them.
Supports only those who can help in moving up the ladder.
Gossiping and undermining other people's work in a harmful way.
Envious.
Greedy as Hell.

Exploits the others for their own success, sometimes
in a way of exposing their "flaws", thus gaining sympathies
from other fake people.
It's just, simply, freaking, fake. Like the CNN news!!!

steemit psychology life philosophy scam
3년 전 via
esteemapp
by freedomnation57
$0.66
13 votes
댓글 남기기 2
Authors get paid when people like you upvote their post.If you enjoyed what you read here, create your account today and start earning FREE STEEM!
STEEMKR.COM IS SPONSORED BY