Welcome to my Steem Stats Report for Saturday, March 24, 2018. All data comes directly from the Steem blockchain and is based on UTC time.

1. Daily number of Posts (including comments) 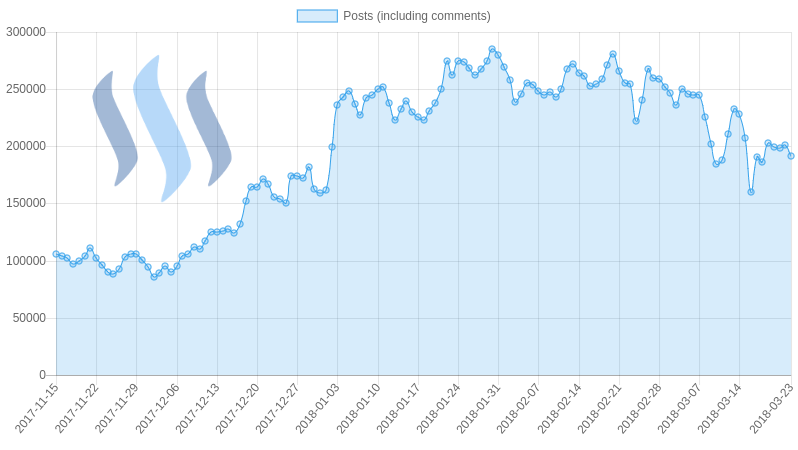 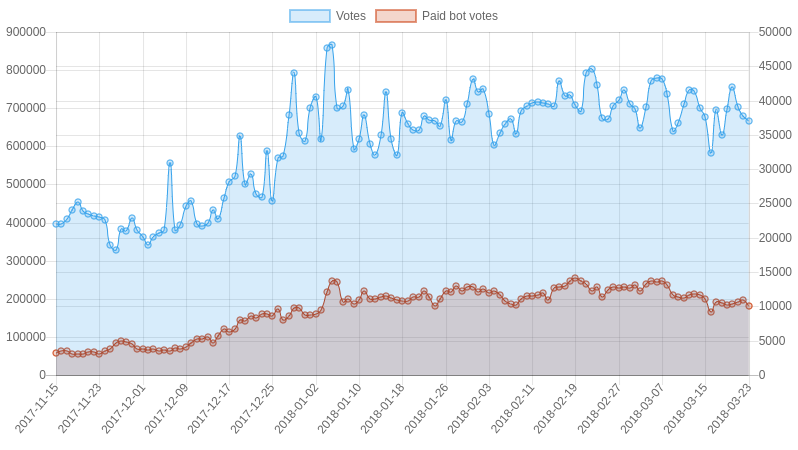 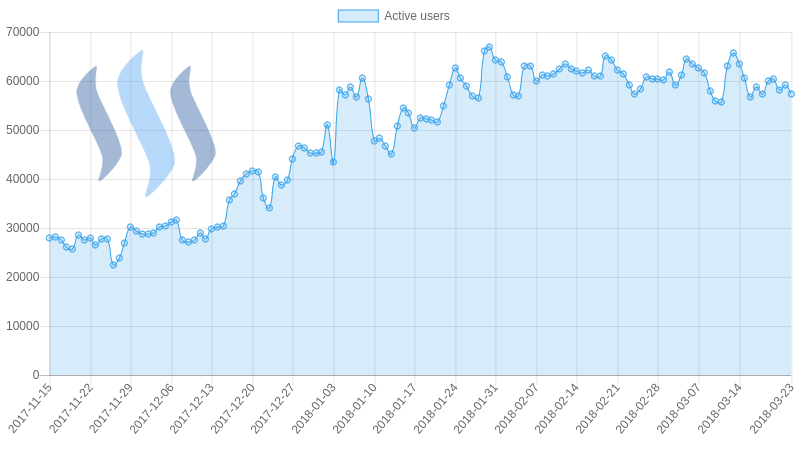 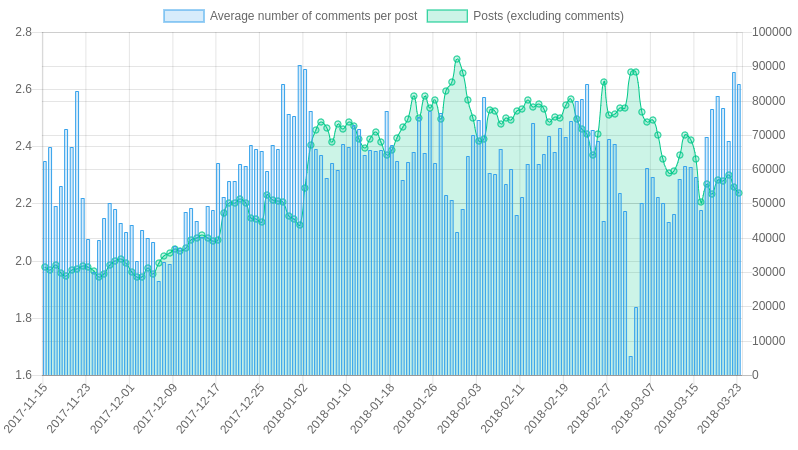 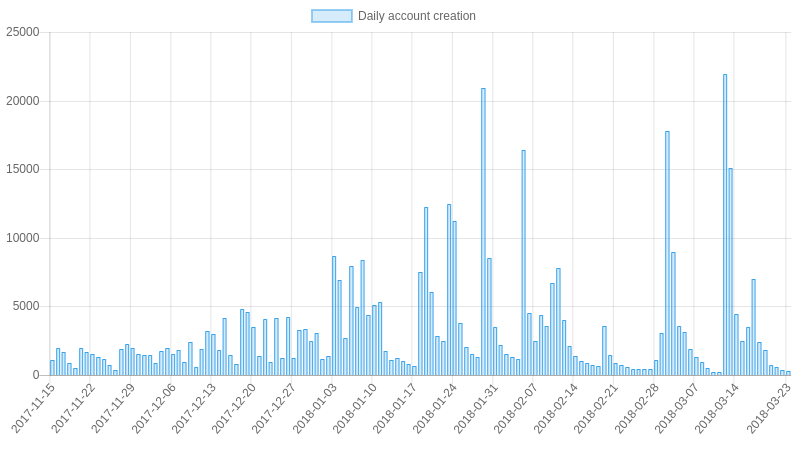 6. Daily Amount of Steem Powered UP & DOWN 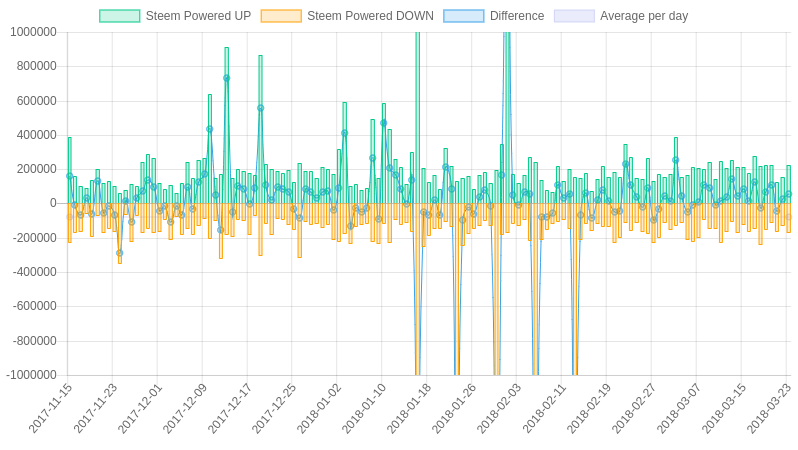 7. Daily Steem Transfers from and to exchanges 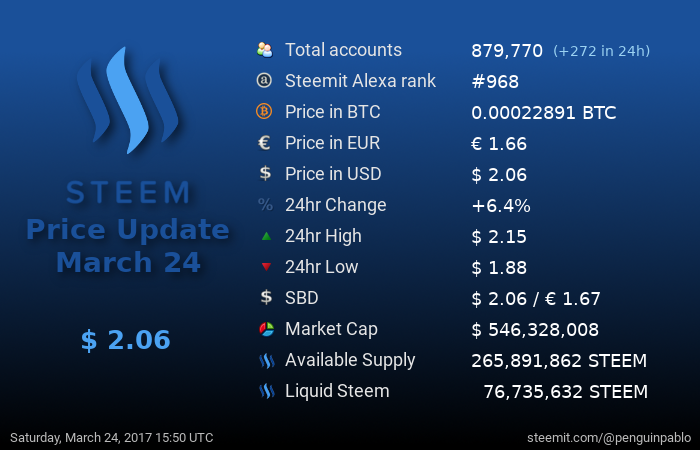 ¯\___(ツ)____/¯ Follow me @penguinpablo for daily Steem statistics.
steemit stats steem crypto cryptocurrency
3년 전 by penguinpablo75
$20.38
172 votes
댓글 남기기 38
Authors get paid when people like you upvote their post.If you enjoyed what you read here, create your account today and start earning FREE STEEM!
STEEMKR.COM IS SPONSORED BY

Guess the good thing with less people joining is more rewards for those who are on here daily.

isn't that funny? People on here are incentivized NOT to have new ppl join the platform.

no, accounts are still manually created and they typically approve a lot on a single day. You can confirm this in the graph above.

Ah, very well, but how do explain the decrease in Alex ranking? I thought so, but then just noticed that the stats were from a few weeks ago so the $3 price made sense. I hope we get back to that price!

I had the same question some time ago and wrote this post about it.
https://steemit.com/steemit/@penguinpablo/how-much-sbd-and-steem-is-sent-to-the-voting-bots-per-day

Thank you, Penguin. But that is not what I meant. I do not want to know how much a bid bot makes but rather ... what amount of upvote power goes through them. I am trying to build a blog on here but I have noticed that decent payout and as such future SP seems to only be available if you bot your post. I want to get an idea of if it is even possible to build your blog organically ... that is from real traffic to your posts.

If you look further - you will see many people with good payouts who are not using bidbots. Some do - some do not. Many of the older and bigger people here do not agree with the bot idea at all.

The best tips that have worked for me or other people I know are:

In my experience, unless you are willing spend a lot of cash and don't care what the return is - the bidbots are no longer a good strategy.

Here are some methods to make connections and money here when you are new. This is an old post I did. I no longer use the faucet idea except with @sydesjokes which is a good place. 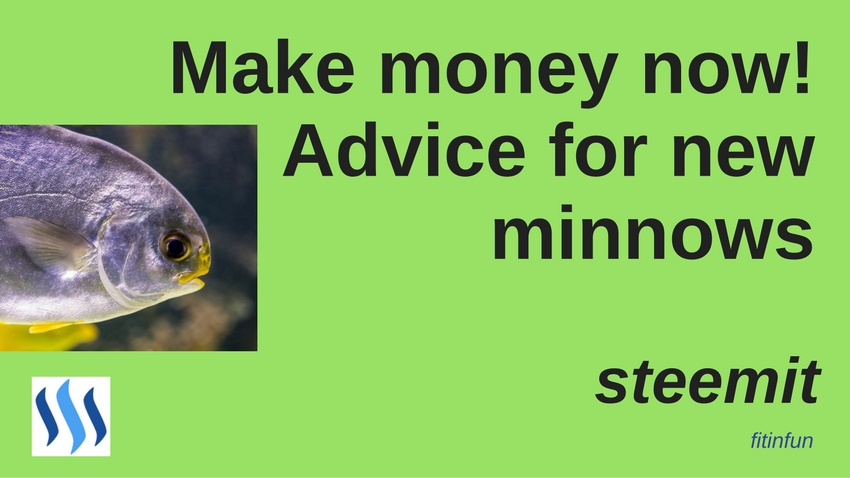 Great proactive advice. fitfun. It is much appreciated. Yes the bidbotting is a little deceptive. I gave it a go today to see what would happen. I spent 1 SBD and got back a vote just under that. The thing is if someone bids lets say 40 SBD and get back 30 ... it looks as though they made 30 on the post. Unless they follow up by looking at the wallet, they don't know they actually went into the hole.

I may use bitbots again, but I have to say I'd prefer steemit without them ... I post regularly but not too frequently and am super supportive ... without bots that kind of behaviour would be more valued. As it is ... there seems to be two economies going on ... one for minnows and dolphins and whales who don't bit-bot and one for whales with bid-bots. For a whale, it is much more profitable to run a bot than to roam around and curate the old fashion way and certainly less labour intensive. It keeps steemit very top heavy. But lump it or like it, I guess ... it is the way it is for now.

The formula I use for profit on bots is -

I would say that most people who have any level of success here do not roam around voting for anyone. Everyone is using auto-services to vote. The vast majority of my post voting is done by @steemdunk. If I want to support you - I will add you there and vote for you each time you post. Therefore I am supporting you but I will rarely even see your post. My manual upvoting mostly goes to comments.

I visit the people I upvote like that a few times a month to check on them and their content. If I was a whale - with a huge vote - voting many people per day automatically, I could not even do that. I have people that vote all my posts but I only see them come to comment once in awhile.

Most whales - and most people here - are not running bots. Instead they delegate to the few people who do run bots and get paid regularly. It is easier for big people to delegate and have low value for their own vote - otherwise they get thousands of comments of people begging them for votes.

Bots one way or another do seem run contrary to the stated ethos of the platform. It might work for the wealth of those at the top, but I wonder if it is good for the health of the platform over all. I remain with the sentiment that greater rewards should be filtered to those who are using the platform for social media and blogging purposes. If more people get wind of the bot situation, they may choose to not join or soon be run off and fewer will be willing to invest in SP. Given the issues FB is facing, now might be the time to focus on the overall health of the platform. That which becomes too top heavy, topples over.

I do appreciate the conversation. Wishing you a very good night:)

Thank you so much for pulling out the bot votes. This is very interesting. I used bidbots to good result from mid December until about mid February. Then they died as a profitable endeavor and I am not going to lose money on them in the hope a whale sees me - or whatever people are going for.

I used them small, and strictly to get my posts over $10 payouts (for the no-follow), to reward my real voters better, and to make a profitable bid for myself. That all changed after the cat and bernie got involved. I'm all for reducing spam and garbage here, so I do not really disagree with their efforts. I just stopped in case one of those guys decided I would be a good person to downvote since I have no time or energy to follow their rage and avoid them.

But now all the bots on steembottracker are big and require very large bids. Whenever I check - they are all crashing hard. I do not have that type of money to waste. Ten cents I can do - $5? No. Most of the little ones are gone from the steembottracker anyway now and there is no way easy way to find out if you should bid or not.

Meanwhile - many people have delegated their sp to the bots and don't vote at all anymore. The bots are also sucking up the paid delegations, so the little guys are priced out there too.

Hopefully this monster will evolve in some better way to help the little guys. I'm not following the situation much now, but I still have hope. However, I checked a few friends who are still using bidbots and they are losing money big time - I would be sick to have such negative roi.

I really appreciate your reports and Steam Now. Thank you for all you do here.

Looks like Steem activity is down a bit... We need to start promoting Steemit and get more users onto the network!

Not as bad of a drop off as I expected for the price point so thats a good thing. Are SMT out because if they are they really seem to be doing nothing...

SMTs are not released yet.

Though price is going down but thw community is growing! 😍😍

Wow! Those are some impressive numbers! The steemit community is going strong💪

Steem is going down again :( It making me sad and sad :(

I appreciate this steemit...

I would like very much if you could read some of my posts ... I really put a lot of love and effort into them. I only ask that vote for me if I deserve it, but you would make me incredibly happy if you at least read it!
Receiving your support is like a dream to me
You have my vote, and I stay attentive to your next publications!