What is it with all the Fake Accounts?

I have noticed lately that every time I post article I get several new ‘instant’ followers. Someone mentioned in a recent article that they may not be people but bots.

So I decided to check out my latest set of ‘fans’ to investigate what was going on. I figured quickly that today’s set of new followers were a little different than usual.

In the space of ONE minute I had acquired ELEVEN new followers. This is more than usual so good for my experiment I think. Let’s see who they are:

After checking out ALL of them, they all have the same characteristics. I don’t believe for a minute these are genuine accounts. I think they have been created by the same person.

So what is the motivation, what are they hoping to achieve by doing this? If it is the same person controlling all 11 accounts, why are they not voting each other up?

Today I posted again, and FIVE new followers appeared, all created in March 2018 with the same characteristics shown above.

This is really making a mockery of the follower’s number as it’s less real than it was before. We all know that a certain percentage of followers are bots, but now it’s getting really stupid.

If these accounts are being ‘pre-created’ by someone, then why are the following someone who is an active user, and who creates REAL original content?

Many years ago I was addicted to MMO’s, particularly World of Warcraft. It all seems like another lifetime now, but over the course of several years, yes years of playing this game I saw more and more automation appearing.

‘The Chinese Farmers’ they were called, accumulating virtual gold using bots, and selling it to other real players for Euros, Sterling or Dollars. Is this the start of something that is being organised by automation? I worry about the future of Steemit and what it is becoming.

EDIT: And here we go again, I post this and I get all these new followers, all doing the same thing. That single link to YouTube and nothing else. 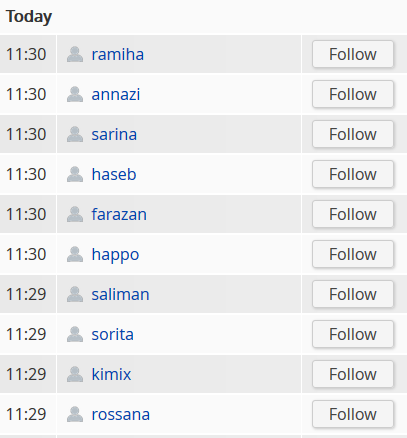 If you found this article so invigorating that you are now a positively googly-eyed, drooling lunatic with dripping saliva or even if you liked it just a bit, then please upvote, comment, resteem, engage me or all of these things.

steemit abuse blog followers fake
3년 전 by slobberchops74
$14.60
103 votes
댓글 남기기 35
Authors get paid when people like you upvote their post.If you enjoyed what you read here, create your account today and start earning FREE STEEM!
STEEMKR.COM IS SPONSORED BY

I noticed new followers too everytime I post but I didn't check their profiles. I just assumed they are bots.

I want to read real things, these are not followers, they dont engage, they dont vote up anything, and they are just polluting our system.

lol... reminds me of my 1000th follower celebration :P

Well.. at least you googlyguys upvoted the article!

It's making a mockery of my forthcoming celebrations!
We should maybe divide the followers by 10 and thats the real number, maybe 20, I think 5% are probably active.

Most certainly bots coming to take over! Probably could use some tooth whitener! I suspect that only around 1 in 5 accounts is a real person. May even be less. Steemit are supposed to be getting them, but it looks like there are ways around that. You can buy accounts, but that costs. It should be possible to see if they were created that way. I've not looked into who my new followers are. I only care about those who comment. I worry these are being prepared for some sort of spam campaign.

'I worry these are being prepared for some sort of spam campaign.'

Your last point is the one I am concerned with too. Are they being prepped for someting that is going to further compromise the reward system?

Hey @slobberchops, I was thinking about posting something akin to what you wrote. I noticed that too: gaining between 5 and 10 new followers every time I post... It started happening this week I think, because before that I was gaining followers "organically". And they indeed have just a few posts, links to youtube videos, and never upvote anything.

Bots indeed, but I am wondering if these bots were created to artificially increase the number of active users on steemit. There have been many posts lately discussing the gap between total users and active users. It is huge.
So, were they created to boost these numbers? If so, who does that?

Also I have a question: does the number of followers have any influence on the reputation? My guess is "no" but I am not sure...

As you mentioned it started last week, and now every time I post I get more 'crap' followers. I wish I had answers, but it seems nobody has any idea. I wanted to get the message across, and it seems you have noticed it too.

The reputation system does not have a bearing on the number of followers you have.

I gained 43 followers after posting a photo of my dog last night. None of which upvoted. 13 in a few minutes after my previous post. I don't get it. Why follow if not upvoting, commenting, etc?

Do any of those have the same names as the ones mentioned above, or even the same characteristics?

Yes, many of the same accounts. I checked Steem Followers and it looks like it started on May 18th. Some of the accounts have unfollowed me. Most were created in March, and many have a few thousand followers.

Same thing happened to me, twice. A block of accounts all followed me at the same time with similar characteristics. Only a few of them had an image.

I agree with you. I was getting excited when I started to see my follower count grow and grow. Then I got looking at the accounts and realized, they aren't that old and they have very little SP and Rep. There is no way they are upvoting any of the content I am putting up, so I am not sure why they are following me. I also have those accounts that follow and unfollow me multiple times a day. I am not sure what is up with those, but it is kind of annoying!

Sigh...no wonder new people who actually want to get on the Steemit platform who genuinely want to produce content have to wait weeks for an account. You are right, we want to read stuff from real people and not just copy and paste stuff from the bots. A lot of SP being used badly!

The sign up process is much better now, around 2 days I think. A friend of mine signed up recently and that was his wait time. It does cost SP to create accounts as 15SP is delegated to new ones, so yes.. a lot of SP is being wasted.

Really? So good! A friend registered on the 16th of May and as of now has yet to receive an approval

I can only speak from my experiences, it is better now than my 3 weeks I had to wait though.

Wow ok that is really long!

When I first started in Steemit one of the things that I was impressed was the reputation of accounts.

Here I was a Reputation 25 and I saw the first people that were guiding us had reputation of 55 or higher and some even at 60 already.

Then their followers were at a thousand followers so in my mind I wanted to be at 1000 plus followers and 60 plus reputation.

Fast forward to 6 months and I saw that the number of followers is of no use unless you use busy.org and then your followers total SP will be of use unless they are all 15 SP lol but then 15 SP multiplied 1000 accounts that is still 15,000 SP and would give you an upvote from Busy every12 hours hahha.

Yet it is alarming how many bot accounts are being created while real users take long to have an account set up.

The setting up of accounts is getting faster now. A friend of mine only had to wait 2 days, a marked improvement on my 3 week wait last February. They are doing better in that respect.

These fake accounts, I have no idea what they are about.

hiya! its not the start its been going on for months and ive been trying to get some folks attention about it. thanks for the post!’ not only are they doing this but botting these accounts into the hundreds as well. its disgusting and takong shares and much more away from
the platform. smh

This is frustrating and slightly worrying, I agree. I'd welcome an option to block unwanted followers.

Every time i post i get 5-6 new followers which is very odd. Inside a few seconds of posting. I think someone programmed accounts to follow everyone that posts on steemit inside a few secs. Odd, since ive no idea what good that will do but whatever.

I get this each time, also if you use an upvote bot. I just report them all to Steemcleaners to try and get a bounty on all of them!

Bots are an issue appearing on every social network, here with a more focus on monetary goals. Where money can be made in an automatic way, there always be a group of people exploiting it. The question has to be asked, how to detect does accounts and stop them. But that is already an issue on its own.

How can the system allow this, what are the bot creators doing to make so many?

I wish I could tell you, I have no idea.