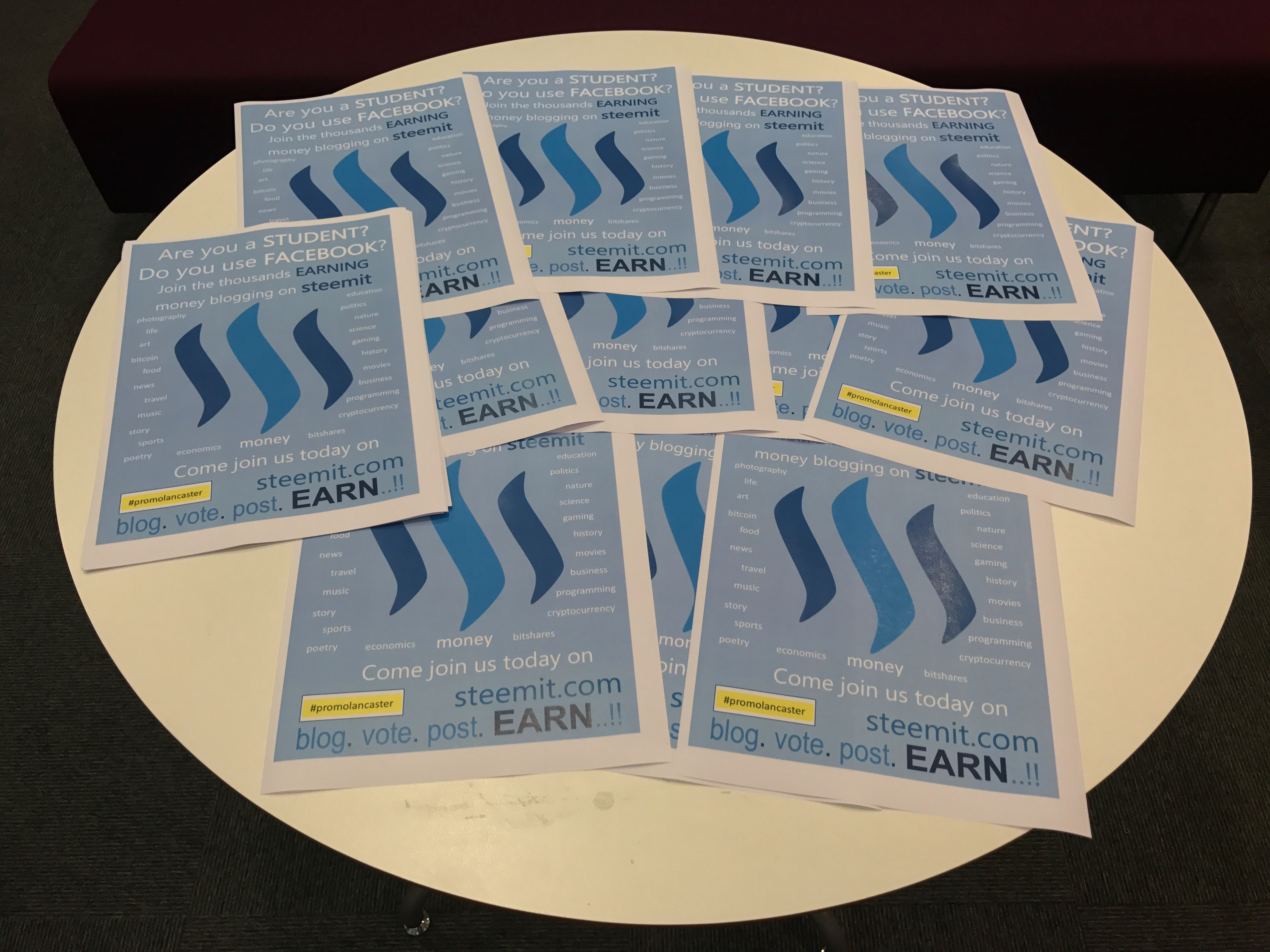 Following on Stephen's @stephenkendal Blog last night I am excited to announce that I will be promoting STEEMIT under the tag of #promolancaster in and around Lancaster University.

The initiative of the #promo-uk Team is to spread the message about STEEMIT throughout UK Universities by targeting young individuals who we believe could really benefit from STEEMIT.

As a University Student I am I looking forward to sharing my experience on STEEMIT with my fellow students.

Over the past few days, we have designed a #promo-uk poster and these have now been put up.

The posters have been designed so that the STEEMIT logo can be seen very easily from a distance.

Today we debut the new poster!

I have placed the posters all over the campus in strategic points, including those which are passed by HUNDREDS, if not, THOUSANDS of students and staff each day, allowing direct access to the target market, 18-24 year olds!!!

The great thing about Lancaster University is how its been designed around a central pathway, "the spine". This enables targeted posters to be placed along it, and more so at the break out point as you go into the central square. 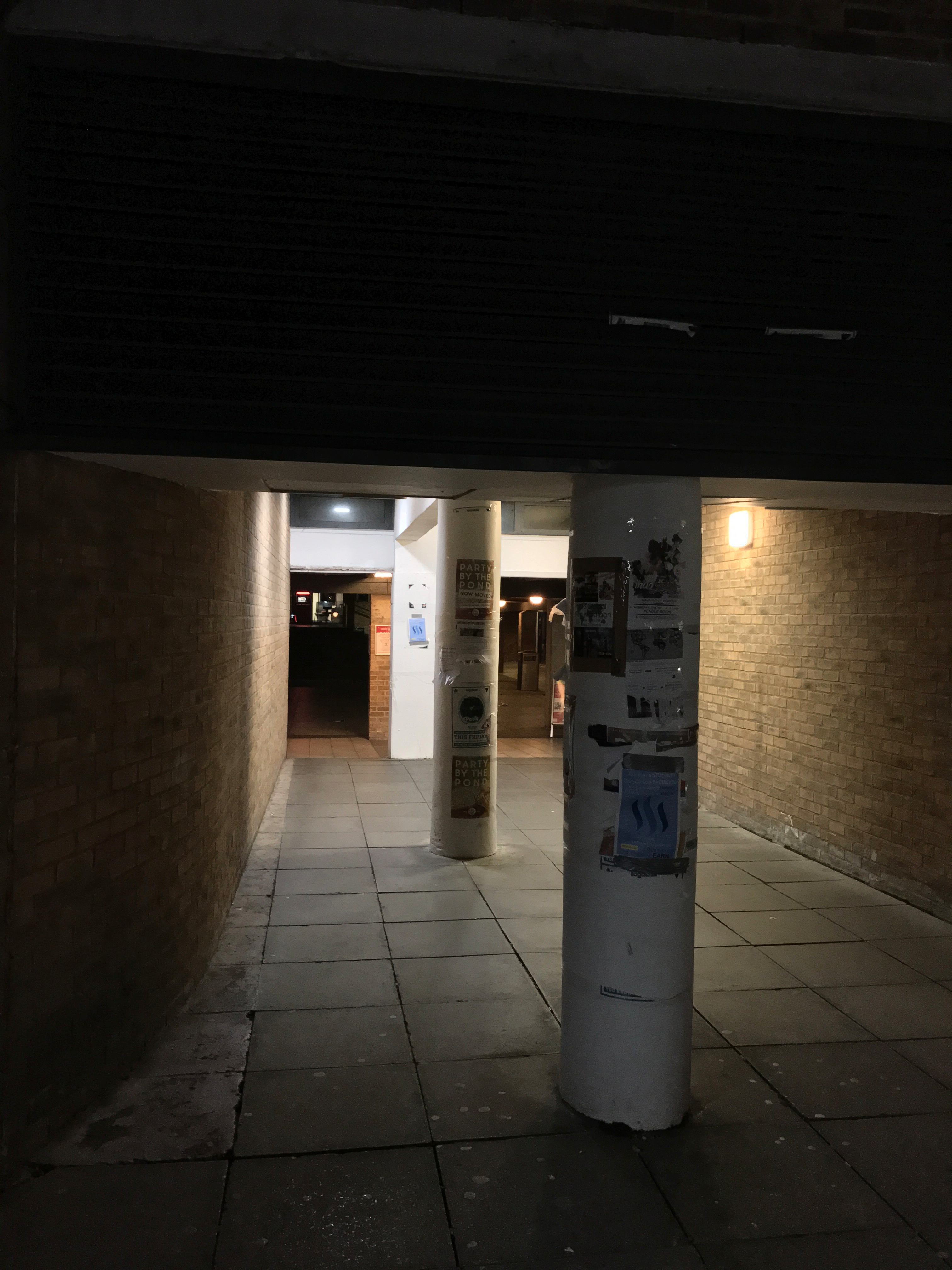 Not only is it important to target access routes, but also where everyone works and studies, so I placed around 200 posters in the labs around campus including one of the main computing labs. 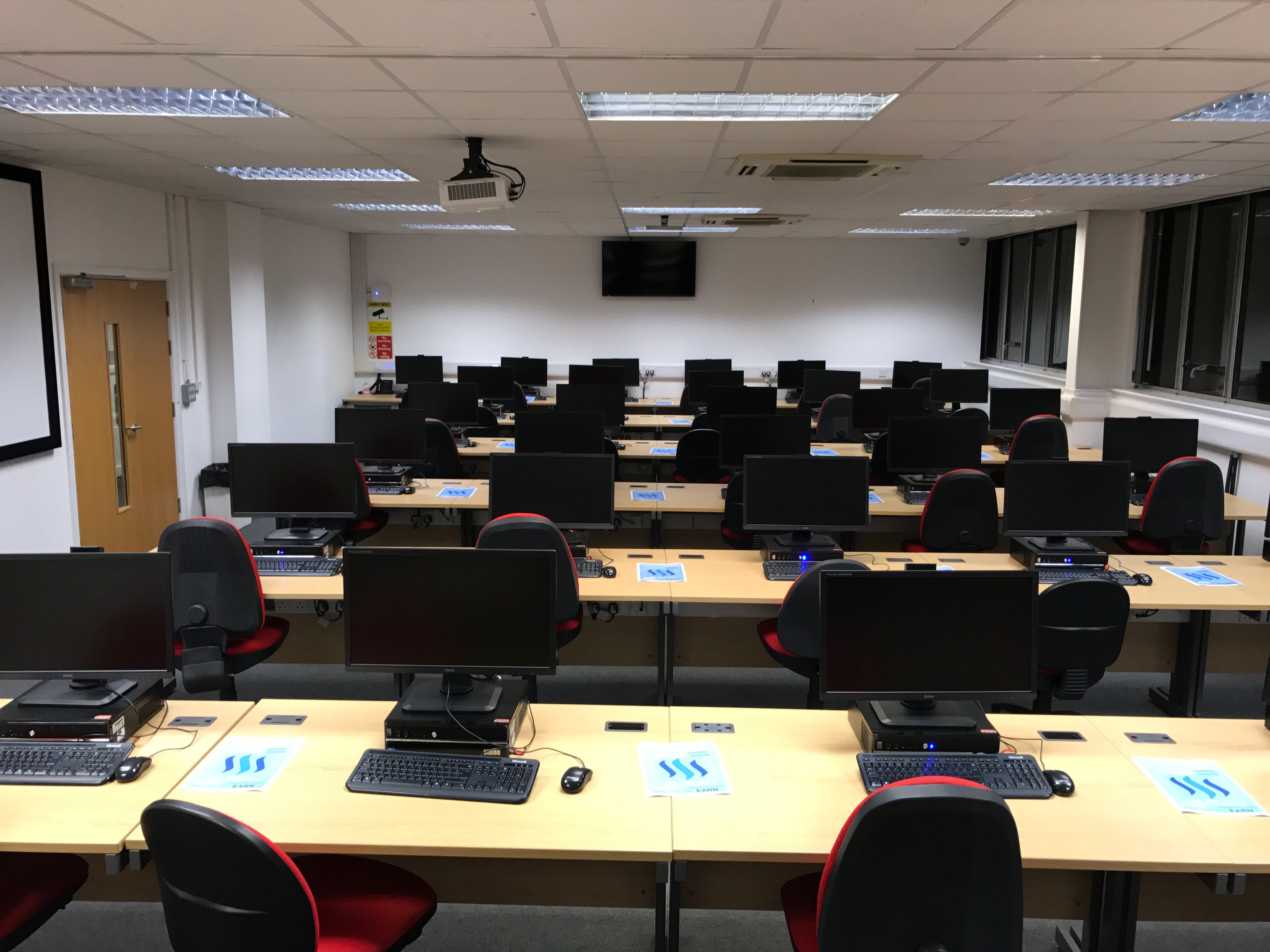 Students this morning will have entered the labs lab and seen all of the posters!

Students will definitely see them and take notice. With Steemit posters being up it's now a case of handing fliers and posters out to individuals to spread the word! 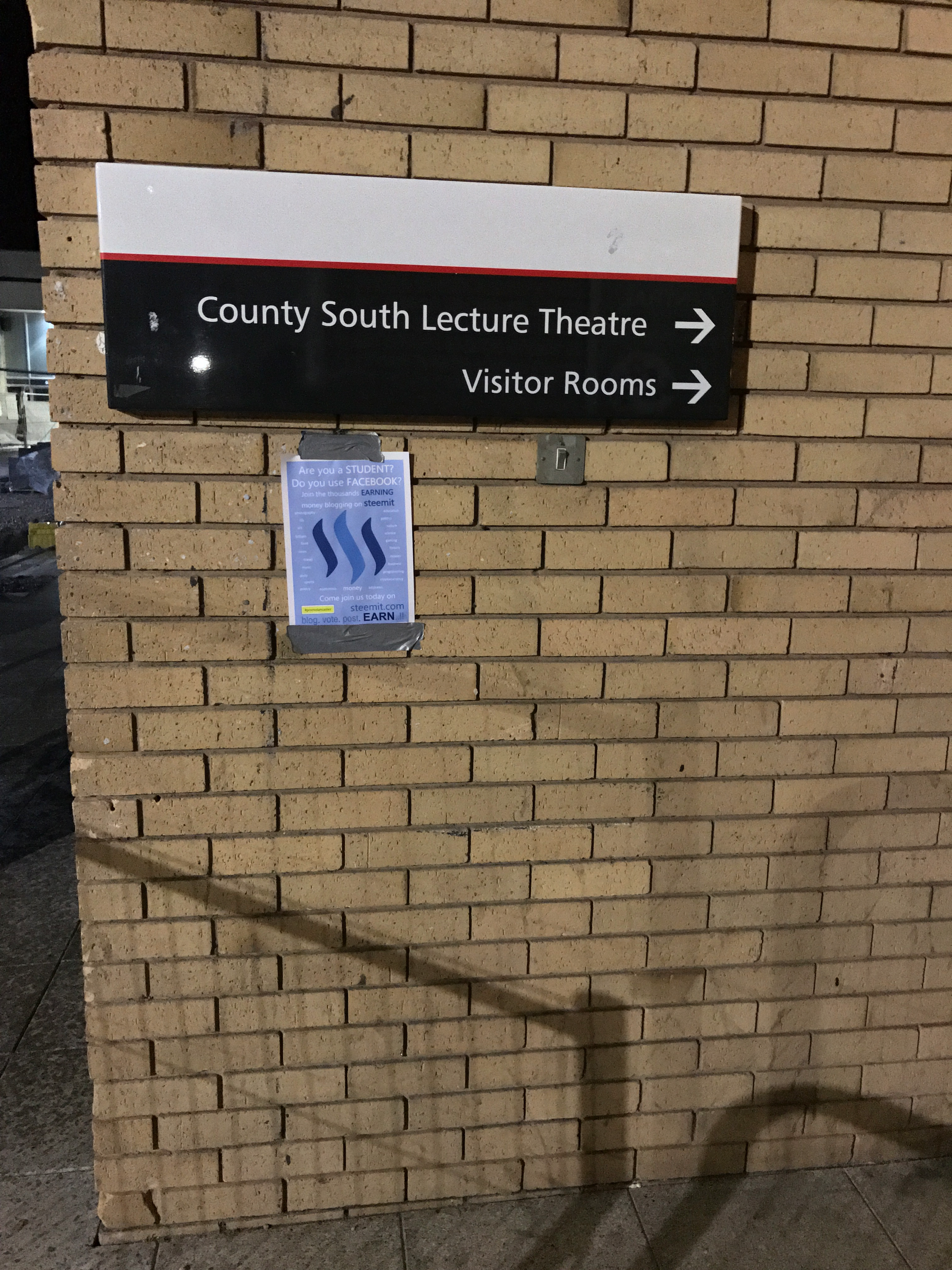 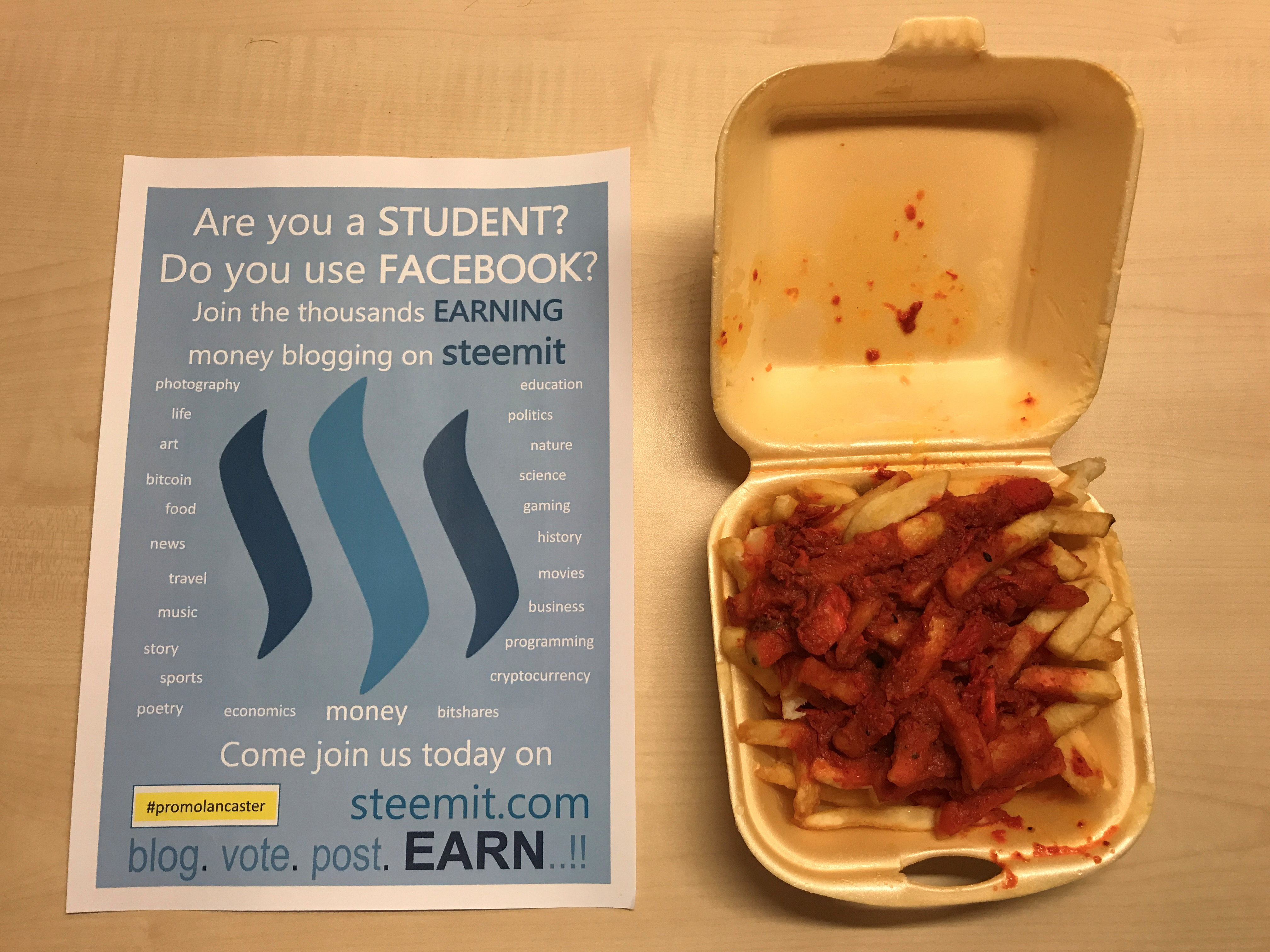 steemit life marketing promolancaster promo-uk
4년 전 by themeanbean47
$15.14
28 votes
댓글 남기기 19
Authors get paid when people like you upvote their post.If you enjoyed what you read here, create your account today and start earning FREE STEEM!
STEEMKR.COM IS SPONSORED BY

Excellent work mate keep it up! Hopefully a lot of those who you've reached out to will give Steemit a try

Excellent marketing initiative... thanks @themeanbean for making steemit popular, your efforts will be rewarded....

Well done Kiran. This is simply AWESOME.. !! I am excited to have you on the #promo-uk Team and look forward to getting some feedback from you over the next few days what your fellow students think. This is EXACTLY the kind of thing I put #promo-uk in place for. Once again Kiran, WELL DONE..!! Stephen

Thanks Stephen! I'm really enjoying being part of the #promo-uk team and and excited to continue working!

Good stuff this is a fantastic idea! Good luck and please keep us updated I am following. Cheerz!

It's amazing how Steemit is changing so many lives!

Thanks for your support! Cheers, Kiran

Thanks for the support! Really appreciate it. Cheers, Kiran

Excellent work you are doing here! Following the Brits from over here in Spain 👍🏾

The weather is probably better over there than here!! Thanks for the support.
Cheers, Kiran

I should hope so! No worries, well done to all involved.

excellent a local person on here.

You give that info away for free?? I charge people to find out about Steemit it's so valuable :D :D Nice post. I like your page. We should connect! I gave an up vote.