Yesterday I received the following comment on one of my Steemit posts.

So naturally, I wanted to do some research of my own in order to find out the truth behind Superior Coin. This is what I found.

The History of Superior Coin

Clicking on the link in the posting above brought me to this page, which accuses the CTO of Superior Coin, Nathan Senn, of allegedly stealing Superior Coin from the "Original" founder Michael Q Todd back in June 19, 2017.

From there I followed a countless number of different links and read numerous other postings that were all written by Michael Q Todd, accusing Nathan Senn of allegedly stealing Superior coin. While most of these postings were written about 8 months ago or so, which was leading me to believe this was all old news by now. I started to notice there was a new resurgence in postings by Michael Q Todd after several months of silence as you can see in the photo below.

So Who is Michael Q Todd?

From what I could find, Michael Q Todd isn't the most reputable looking person in the World. Yet, aside from appearances alone, he appears to be a fraud who is claiming to be the 100% owner of Superior Coin. I say this because the claims made by Michael Q Todd simply just don't add up. For instance, his timeline of events continue to change. If you look closely at both photos above from the forums postings you will notice that he states Superior Coin was first stolen on June 19, 2017 at the time of his first posting. Then in the second posting, written today, he is alleging that Superior Coin was stolen on July 21, 2017. Additionally, #sydesjokes wrote an article on this topic that provides more details about the matter, which you can read here called Is Superior Coin Really Superior?

After learning more about the history of Superior Coin, I kept asking myself why now? Why is Michael Q Todd just now starting to make all these false allegations against Superior Coin as all this news appears to be yesterday's news in a sense as it all stems from back in June or July of 2017. From what I can tell, the timing is oddly coincidental to the recent rise in price of Superior Coin as can be seen on coinmarketcap over the past 24 to 48 hours. steemit scam kryptonia cryptocurrency blockchain
4년 전 by tspink49
$2.74
69 votes
댓글 남기기 52
Authors get paid when people like you upvote their post.If you enjoyed what you read here, create your account today and start earning FREE STEEM!
STEEMKR.COM IS SPONSORED BY

Please how can i buy the superior coin

GREAT post and you gotta love MQT (not really, you can't love or even like a person that continues to spread untruths). It is amazing how far @SuperiorCoin has came since the split. #SuperiorCoin is traded on 3 exchanges and listed on CoinMarketCap.com which is a huge accomplishment. I have remained pretty quite and haven't said much but not anymore MQT has continued to try and discredit Superior Coin and Nathan Senn through intimidation and threats as you can see from his comments on this page. The people have looked at the facts and they speak for themselves. He has tried to manipulate the price and other underhanded techniques. The people have spoken and Superior Coin continues to grow. The person that needs to cease and desist is MQT. A reputation of 3 speaks loads and I am not being paid to write this. If Superior Coin was so important to MQT he would be trying to build it up and not bring it down. I got lucky and got my initial investment back and the current Superior Coin Management Team allowed me to keep the coins that were in my wallet. I have since invested more and I earned the coins I was allowed to keep by promoting the project from the beginning and continue to promote @Kryptonia and Superior Coin. I helped Superior Coin become the Official Cryptocurrency of Citizens Action Network which is a growing worldwide all volunteer network on Facebook (facebook.com/Citizens.Action.Network). CAN has the main page, 50 state pages, several country pages, numerous "special interest" pages and has a few affiliate pages. Thanks to posts like this and there has been many we have exposed what has become known as a "Snot Goblin" . Put that in your search engine and you will find some great stories. Again Thanks for this post and beware the Snot Goblin lives. @fhstralow This is a great book. I fully recommend everyone reading it.

Awesome. I didn't know she wrote a book I will have to check it out. I knew she had wrote some stories that I read. Thanks for letting me know Ms. Joan. Is it available on Amazon US?

Tried to buy his support. Only way can get people to help you.

I upvoted, commented, and resteemed.

P.S. wonderful post: Here's something I found from back in July:

To the Holders of Superior Coin: On the 26th, SuperiorCoin issued its first major statement since circumstances forced SuperiorCoin to sever ties with Mr Michael Todd and Mrs Yoriko Todd. Following that statement, several online blogs and other sites that focus on cryptocoins began to comment on the statement - all of which have mirrored the majority of comments on the SuperiorCoin site: cautious optimism as it continue to go forward in the work. Given the circumstances and many statements and reckless comments made by Mr. Todd last week, that is all that can be asked for.

Following the issuance of this Wednesday's statement, SuperiorCoin has become aware of certain statements made by Mr. Michael Todd in which he allegedly offers to refund any coin purchases. SuperiorCoin has no idea how, or even whether, Mr. Todd's promises are intended to be accomplished.

Mr. Todd is more than welcome to do as he best sees fit with his personal accounts. But while he may well do this on his own, any actions taken by him will not reflect a change in logged Coin ownership or a removal of coins by SuperiorCoin from any holder to him.

If and when deciding to take up this offer by Mr. Todd, please, make sure that you determine, what terms and conditions Mr. Todd is conducting them under. He has no authority to commit resources of, or changes, to the SuperiorCoin structure as it exists today, and as set forth in Wednesday's official statement. That being the case, and to make clear: as far as SuperiorCoin is concerned, a refund of any sort by Mr. Todd does not alter the current holdings of the individual of whom Mr. Todd is refunding. Mr. Todd is not authorized by SuperiorCoin to trade SuperiorCoin's coins for any type of compensation. Currently the only available methods that exist and are currently in place for Trade are private from wallet to wallet.

As referenced in our earlier Statement, SuperiorCoin will be maintaining regular updates and will advise you of SuperiorCoin's progress, and of efforts to deal with coin-holder options as the work continues.Thank you all and please look for our next progress update on Monday, July 31.

I have been waiting for FBI to throw me into prison since July 21st 2017. According to that clown, I'm part of a cyber theft. What ever that means.

Why is your reputation a 3 then?

You’ve listed a lot of people without providing any evidence of support. So either all of these people are wrong (including myself) or you just remain one simply disgruntled person without any evidence. I have read through your files (Please read the post). You’re “facts” and reputation do not support your story. It’s as simple as that.

Why was I mentioned here? I literally have nothing to do with the subject

@crowdifywepayyou That's about the most pathetic pile of "conclusive evidence of theft(''Bull Shit")" I've ever seen. Lies from a meth smoking losser! It's so blatantly obvious that you care only about your self and never had the investors best interest in mind. You say so many lies about the FBI looking for people that no one is ever going to believe anything you say. Lawyer my ass!

Michael Q Todd has nothing to do with Superior Coin, just ignore anything he says

Superior Coin and Kryptonia are great uses of blockchain technology. I also saw some of the allegations that Michael Q Todd made but he never offered a shred of evidence to backup his claims.
I mean what if I suddenly announced to the world that I am fact satoshi nakamoto without any evidence to backup my claim (actually I am but don't tell anyone, I am trying to stay anonymous). As far as I can see these are just false claims by someone trying to take advantage of the work done by others.

You bring the evidence and I'll bring the popcorn.

great article thank you so much for the support! community members like yourself is the reason superior coin is so superior.

Congratulations! This post has been upvoted from the communal account, @minnowsupport, by tspink from the Minnow Support Project. It's a witness project run by aggroed, ausbitbank, teamsteem, theprophet0, someguy123, neoxian, followbtcnews, and netuoso. The goal is to help Steemit grow by supporting Minnows. Please find us at the Peace, Abundance, and Liberty Network (PALnet) Discord Channel. It's a completely public and open space to all members of the Steemit community who voluntarily choose to be there.

I also receive some comment about supercoin thaf it will vanish soon. But I still believe in supercoin because it is superior!

Only one that needs to vanish is @crowdifywepayou. No one will take him srious with 0 Reputation

Thank you for the post. We will continue to support the Krytonia and superior coin project.

Here's a comment by Michael Q Todd claiming to have bribed police all over the world. Check it out. :) 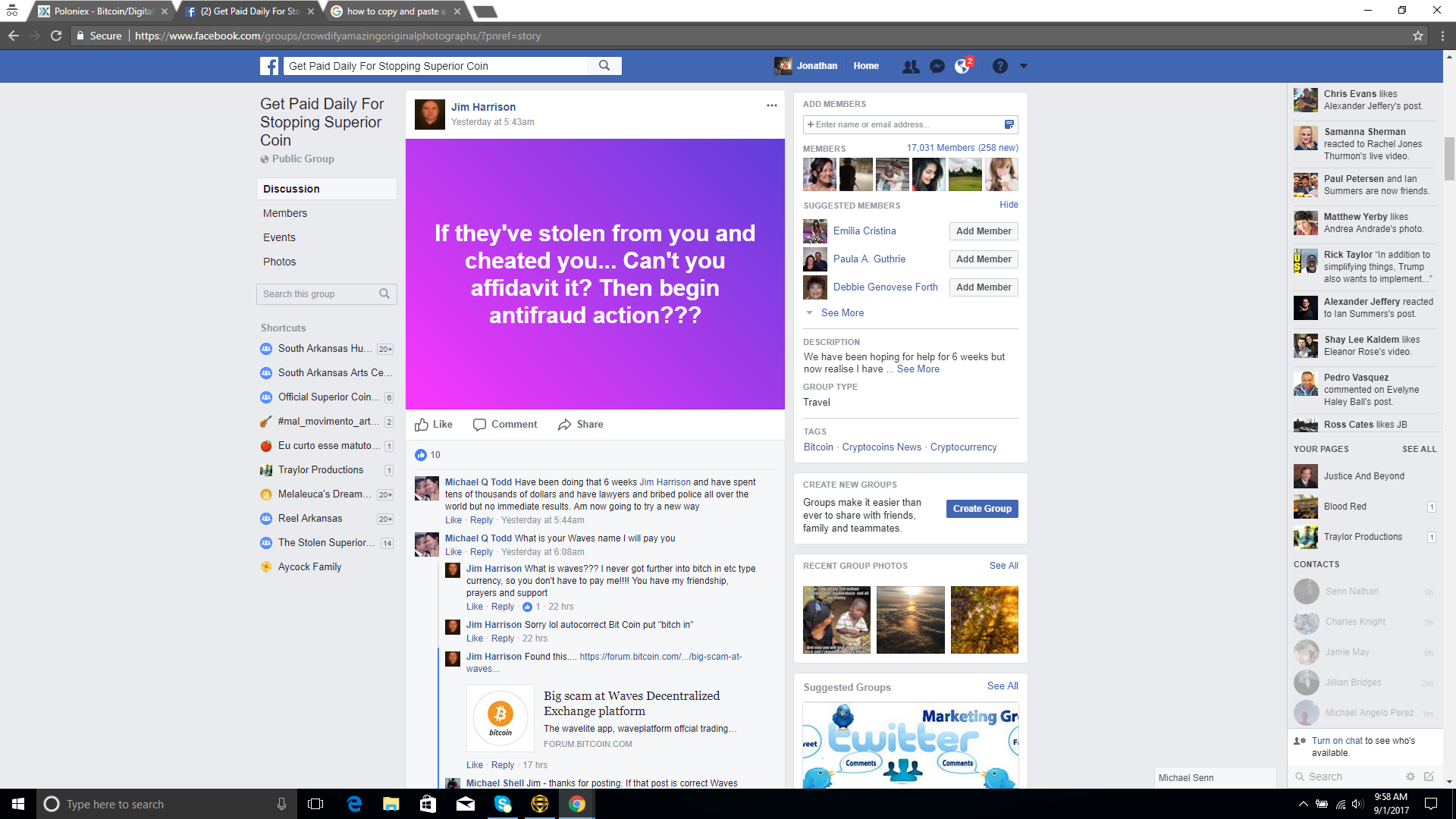 Yes also saw him on Facebook asking his followers to attack people on social media and he would pay them with his worthless scam Wave Tokens.

Great post which lays it out for those who don't know the infamous Micheal Q Todd!

Thank you, I had never heard of him before until he posted on one of my comments the other day. Figured I had to share with the rest of the community :)

Another coin launched earlier than Superior Coin that did not work : http://www.michaelqtodd.com/crowdify-money

I once saw a petition that had thousands of signatures, that petition was for banning water from a towns water supply. They just used the name dihydrogen monoxide.