A CRY FOR SALVATION FROM HUMAN RIGHTS INFRINGEMENT IN NIGERIA 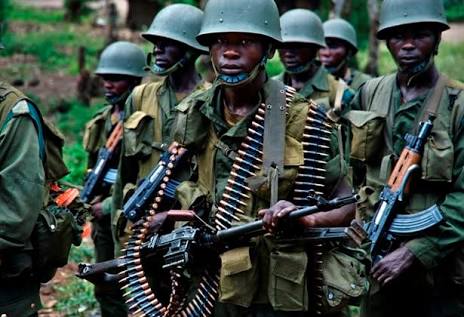 Everyday i wake up after going to bed with endless thoughts; thoughts of fear of what we are slowly becoming. We all wake up to hearing cases of merciless man-slaughters, injustice and all kinds of barbaric acts being melted out on our own kind, and all for mere possession,and never ending insatiable greeds and craves. I keep asking myself a particular question : what kind of forces do we have in Nigeria today? civilian protectors or civilian oppressors? upholders of the law? or advocates for injustice?
In nigeria,news of heart-shattering attrocities being perpetuated by the military and other forces in the nation keeps finding their way into my ears. The painful thing is that, this is gradually becoming a norm in my home nation. People don't view these stories as things that are worth protesting against. Rather, it is a case of "every man for himself" in Nigeria.

HOW DID WE EVER GET TO A POINT LIKE THIS IN OUR 58YEARS JOURNEY AS A NATION?!

With that question in the way, i'd love to talk a little bit on the history of nigeria's military force and possibly give narrate some stories on how we ever got to a point like this.
The Nigerian military is without doubt among the largest in Africa. It is divided into the 3 units, that is; vis-à-vis, Nigerian Army, Nigerian Navy and Nigerian Air Force. The nigerian army was first established in 1900 and its former name was Royal West African Frontier Force.And please i would also want to involve the nigerian police force in this post, as they are also a major party in this evil.
Nigerian Army’s present Commander-in-Chief is the president of Nigeria, and that is General Muhammadu Buhari,and the Present Defense Minister is Mansur Dan Ali. The present Chief of Defense Staff is General Abayomi Olonisakin. The Nigerian Army is prominent among members of ECOMOG(The Economic Community of West African States Monitoring Group) . As at present, the Nigerian army has up to 102,000 men and officers, the Nigerian army had also been able to seize power from democratically elected presidents two times already, namely 1966 and 1983. To be honest, the mixture of the military and government has had "side-effects". Side-effects that include corruption, injustice, etcetera .
Presently, in the nigerian society, the government uses the military for activities other than majorly protecting the lives of citizens,self centered activities that involve using army officers to protect themselves and their families. The nigerian army now plays the role of bodyguard for the rich and high in the society,rather than living to protect the very existence of the masses.
The "people of power" in the nigerian society use the army to block the path of justice, and at their will, they can take dire actions against any member of the lower class on the society that makes the mistake of crossing their path.

This is a clip that brings great sadness to my heart. WHAT IS THE REASON FOR THE ACTION OF THE SOLDIERS?
Well, the group of boys in the video are in an association known as community youths, they basically ask for certain amounts of money whenever people of other communities come to buy landed properties in their own community. This act is a norm in nigeria. It happens in every state of the federation. Although this action isn't backed by the law; the actions taken against them for such was too harsh. An elite in the society was the one that bought a certain property in their community this time, and immediately they asked him for money; he used the army to bully them.
The reason why this action annoyed me was because, he could've followed the right process for justice. But he didn't, rather he took matters into his own hands just because he could.
The unfair system in Nigeria is dis-spiriting.
Apart from the fact that the elites of the nigerian society use the army to act out their selfish purposes, the army on their own perform merciless acts that i hear on the news everyday.
Recently, i heard of the story of my uncle's friend whose rights were abused by soldiers when he embarked on a journey last week.
It was a monday morning and he was late for work, and was in a hurry to get to his office.
At one point, he came across a van filled with nigerian soldiers, and as he drove past them.
The mere action of him driving past them; got them angered. They chased him down and got him to stop his car. They beat him up mercilessly and told him to roll in a gutter that was nearby. When i heard of this, i cried so hard for what my dear nation has become.

This is the height of human rights infringement, i fell on my knees and prayed to God almighty when i saw this video. What sort of soldiers do we have?
Brutalizing the very citizens that they are meant to protect. Causing physical pain to their fellow humans. They now use tools for herding cattles to inflict pain on their own kind just for their own personal reasons. I shake my head in shame for what i just saw.

Another news coming in on venturenewsafrica.com was that the State Security Service (SSS) arrests blogger in Abia State

Just a few weeks ago, the State Security Services arrested a blogger, Emenike Iroegbu, in Abia state-Nigeria. A human rights lawyer, Inihebe Effiong, noted that Emenike, who publishes Abia Fact newspaper, has been constantly harassed by the officials of Abia state government over his publications in the past. He said records show that the Abia state officials are not comfortable with Emenike’s publications. Wow!

While the Abia state government denied its involvement in this, Emenike’s wife confirmed that he was arrested by the SSS. This event indicates the height of human right abuse in Nigeria.

I can only pray that God helps us in a nation where our police force is ranked the worst in the entire world. WHY US?
May God save us!. Please feel free to drop your comments below, and i am very much interested in comments that suggests way in which my dear nation can deal with this problem of human rights abuse, when our very own forces are oppressing us!.
THANKS FOR READING.

steemiteducation life nigeria stach communitynews
2년 전 by juderoyal52
$0.03
3 votes
댓글 남기기 3
Authors get paid when people like you upvote their post.If you enjoyed what you read here, create your account today and start earning FREE STEEM!
STEEMKR.COM IS SPONSORED BY

WARNING - The message you received from @ethan1209 is a CONFIRMED SCAM!
DO NOT FOLLOW any instruction and DO NOT CLICK on any link in the comment!