Sabayang Pagtugtog : A Community Musical Journey in Bayawan Through Walk of Hope ( WOH) 2018 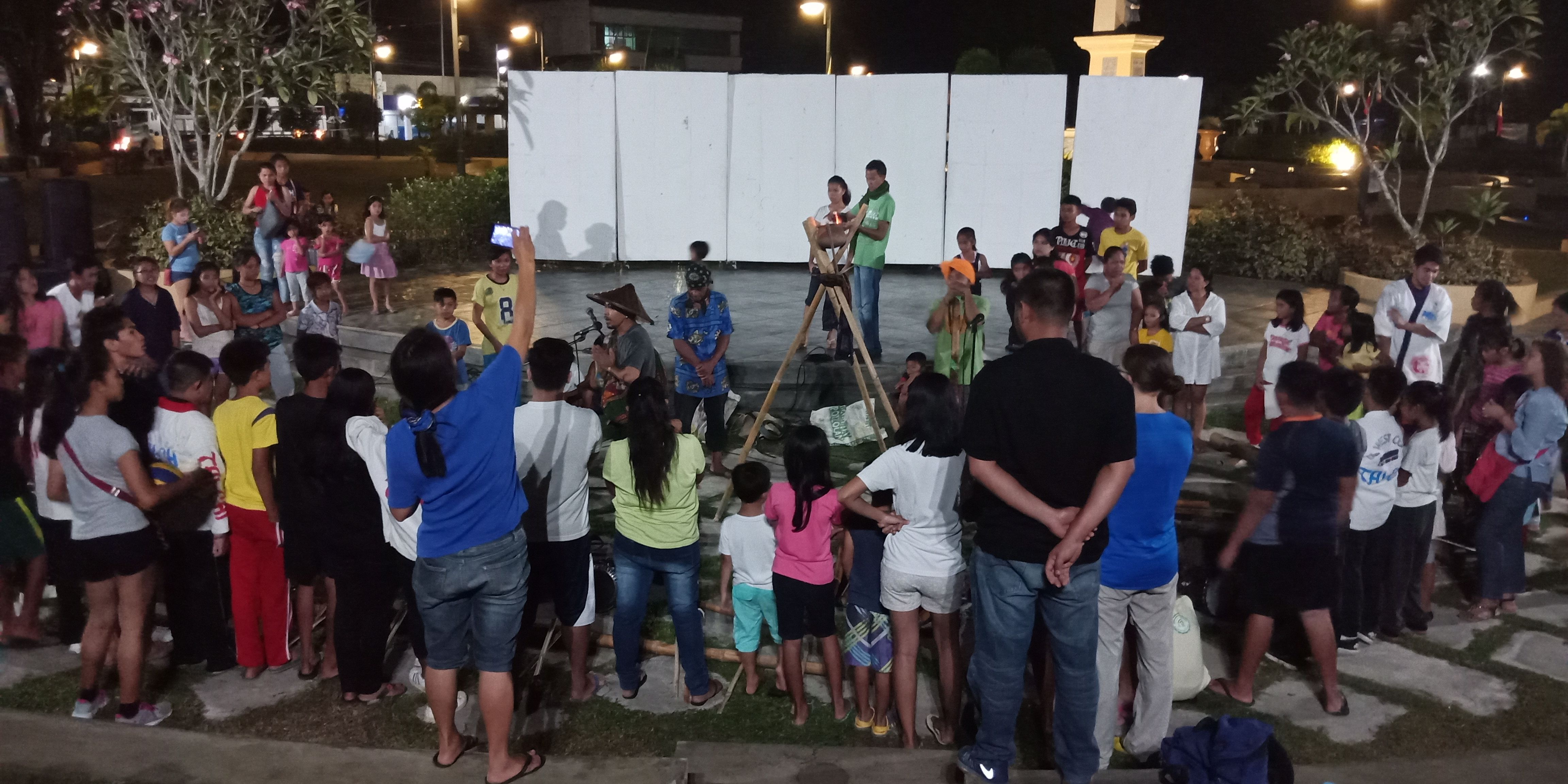 Walk of Hope (Lakad ng Pag-asa) : KAPWA , KaSINING at KaUGNAY. is an on going walking journey . By walking to different parts of the country, there is an exchange of learning and culture with the children, adults, out of school youth, inmates, special children etc. I , walking and bringing with me my Ilocano culture, will get to know others inherent cultural values, rediscover, be proud of one's place of origin and know the materials and resources endemic to their locality, making them reconnect and become uniquely Filipino.

Last Friday, April 6 , I was invited to hold a lecture-demo and an hour of Music Workshop at the Ampitheater in Plaza Bayawan

Going to the venue, Tatay Filcon dumat-ol Rivera a.k.a Tatay Dagsa of Dagsa Alternative Lifestyle Institute (DALI) and I brought 3 bamboo bolos as tripod, almost 30 bamboo sticks and 3 long bamboo poles which will be played as the long drums by the kids later. I brought all my instruments including the new one I have personally created from the bamboo we have harvested. At first, we set up the instruments at the center of the stage but I opted to have the final set up at the grounds instead. This was because there will be a group who will demonstarte Taichi. No worries. It turned out to be a better idea ,too. This made the instruments closer to the audience for the music playing later. 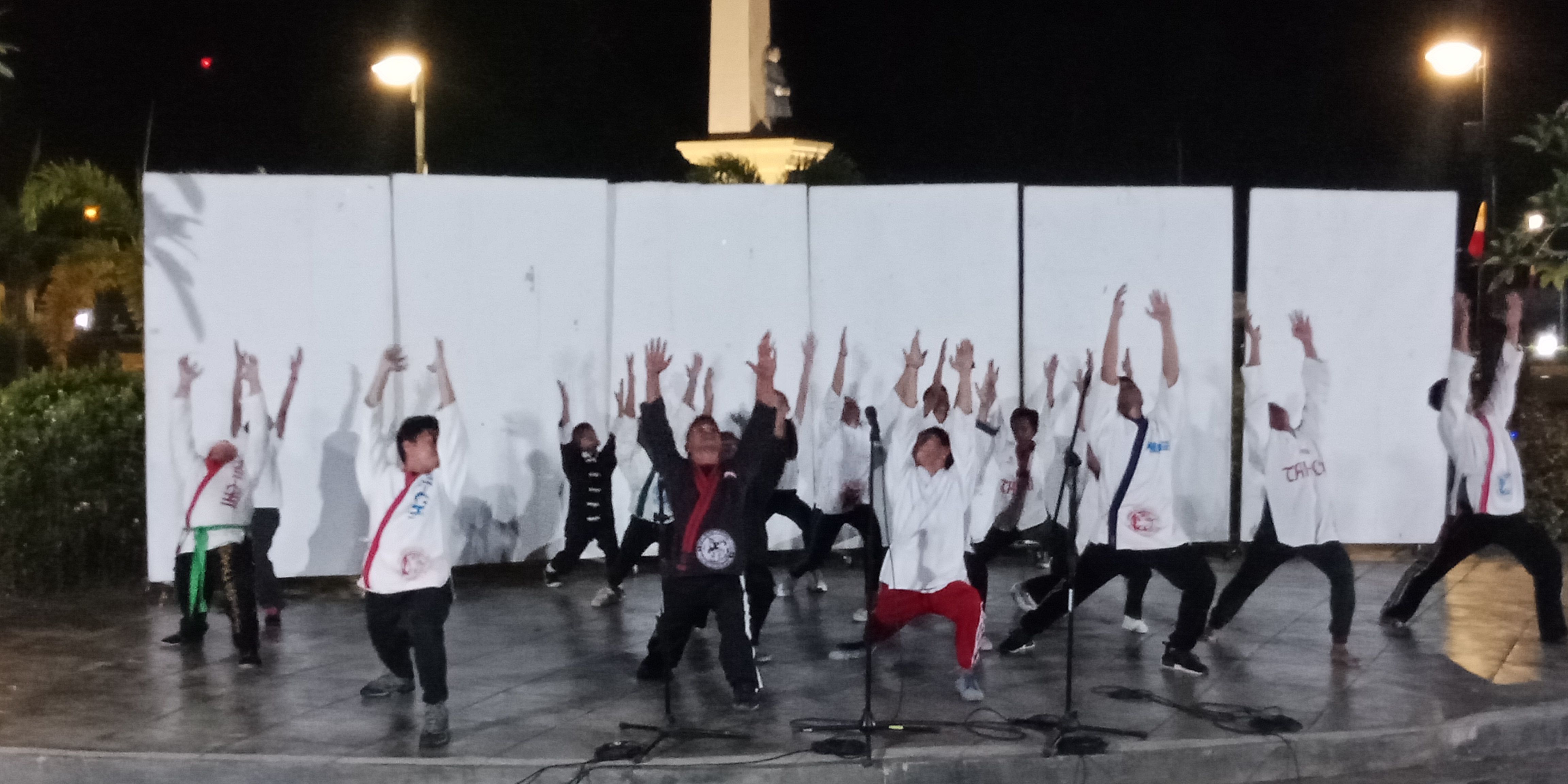 When it was my turn to be on stage, Tatay Dagsa introduced me. I was finding my ground while the instruments were in semi circle of the Amphitheatre. I burnt some kamangyan ( frankincense) as sort of clearing the space, event and venue. Our forefathers and other tribes still do this kind of ritual since time immemorial. I then started playing the side flute whose bamboo was sourced from my hometown Vigan, Ilocos Sur. When all were settled and in a calmer pace, I blew the Budyong ( shell ) as a Calling- a sign we are about to begin . The Didgeridoo I personally made from Bayawan's bamboo was played by my fellow artist Mark Karon from Cebu. Then I started flickering the tip of the Kubing ( Jaw harp ) . A kid added some percussions using the rainstick. and as we fade to end the call, in prayer of gratitude , I uttered;"

( "To one free and grateful celebration ,
Satibay for your warmth welcome, Bayawanons
and to our re- bonding, tatay Dagsa.
Satibay for the blessings and abundant beauty of your City ") 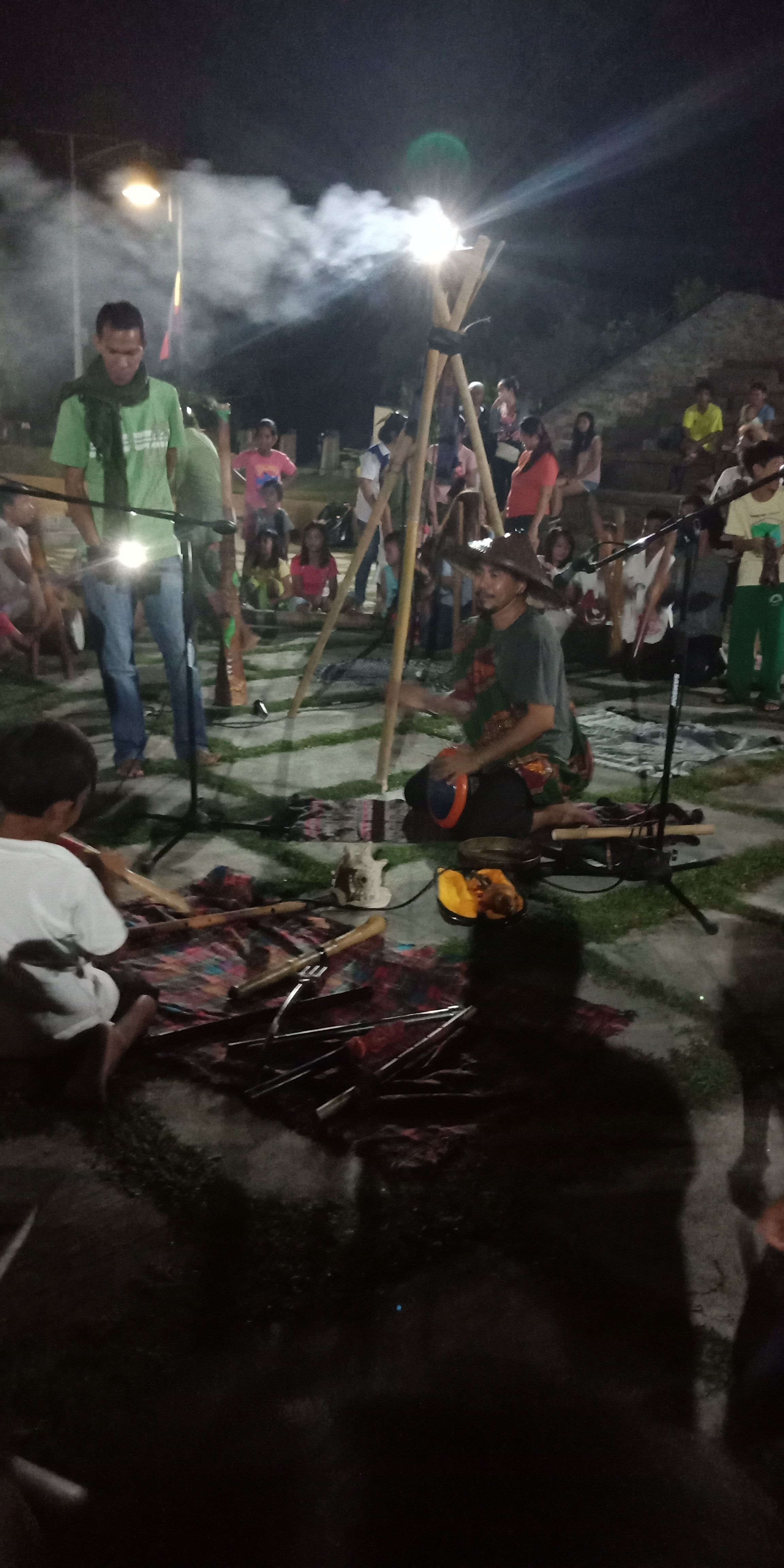 To continue my so-called Musical Journey , Tatay Dagsa played the Faglung ( lute guitar from Blaan Tribe of South Cotabato), while I thumped the gangsa ( flat gongs) from the Mountain Province. Mark karon, this time played his side flute and we mixed the sounds with the HULUSI , a chinese flute and the SHAKUHACHI a Japanese end-blown flute followed by Djembe drumming. As I have invited the community to create music through mimicking my clapping. I mentioned that being a member of the Itneg tribe , clapping our hearts out is a way of sending our gratefulness to the earth, water, air, fire, clouds , sun , moon, stars and all of Mother Nature. The kids from the audience were able to transpose the beat to the tongatong ( bamboo tube drums) , and to the long pole bamboo and used the 30 bamboo sticks we have just created early morning , just before this activity. The sound created by the community became livelier, the crowd thickened and made the music faster and louder. I led the group and asked them to do the loud -soft dynamics until the music faded. We were all happy but I asked them to take a deep breath , sit comfortably , find their spot inside the circle and be present . This will allow them to learn much more about this musical journey. 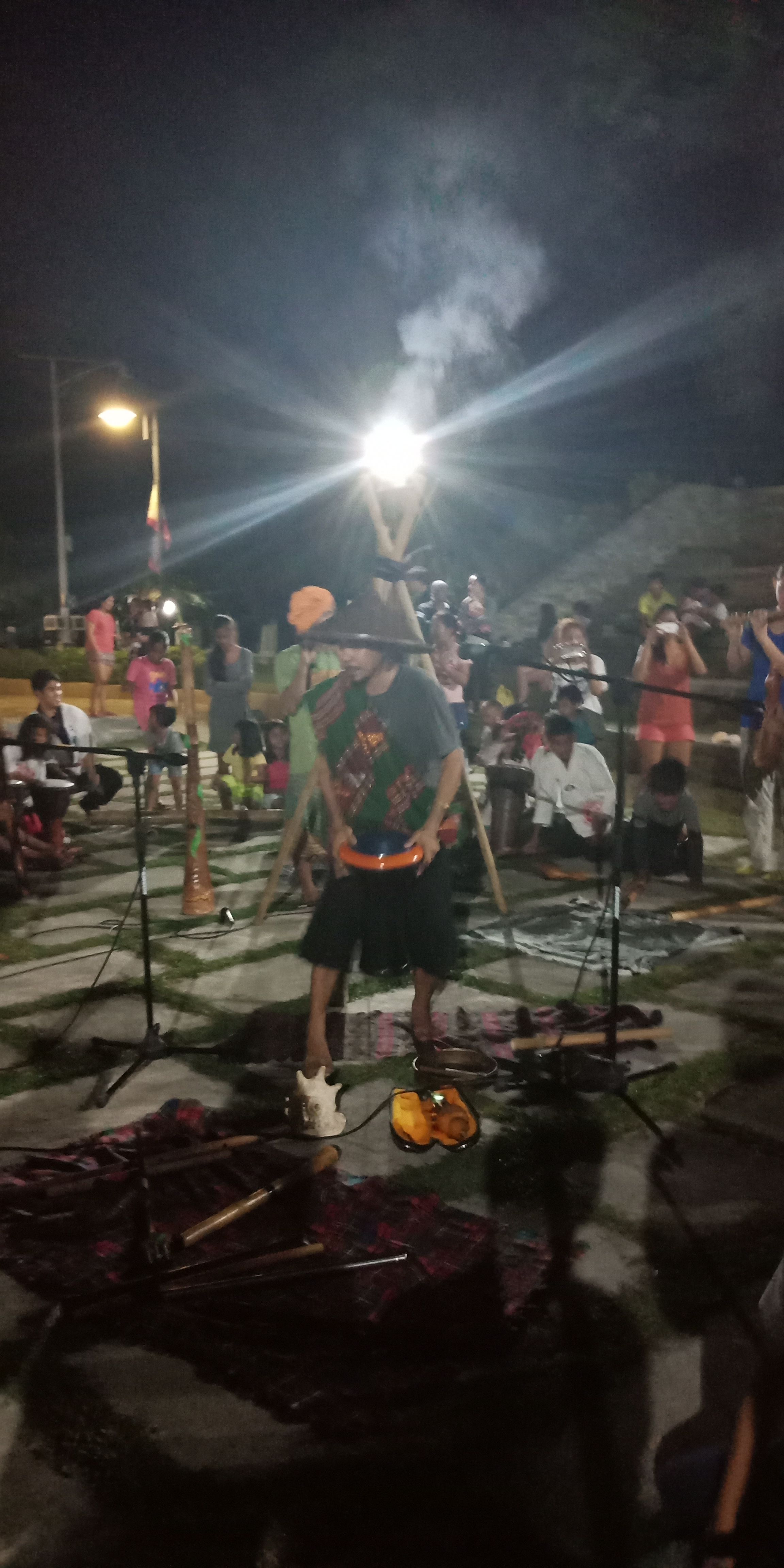 Upon introducing each instrument, showing what other countries have and what could be similar to us or as their counterparts, I allowed them to repeat the names of each instrument by vocalizing it, because the senses leads to a powerful memory retention. We also had a contest for those who may identify the instruments I would be asking. When they guess it right, they will bring home a new pair of the tongatong and Tribu Alinaga's ( my performing group ) CD. Congratulations to the winners who guessed SHEKERE ( African gourd drum)and the DUMBEK ( goblet drum) . It was just alarming that no one was able to identify our GANGSA properly. They were calling it KULINTANG ( metal nipple bossed from down South ) . But I made it a point to reiterate the GANGSA and KULINTANG. They know it by now.

It was very overwhelming being able to share this musical journey outside , into the open air on one lovely evening . One of the most memorable part is when a parent approached me and thanked me and said, " Even if given such a short period of time , I was able to learn so much and I felt I was indeed able to travel to other countires by having a glimpse and knowing a bit of their music and culture." Their children were amazed. Both parents confessed they never thought their children could be so interested. Satibay po. 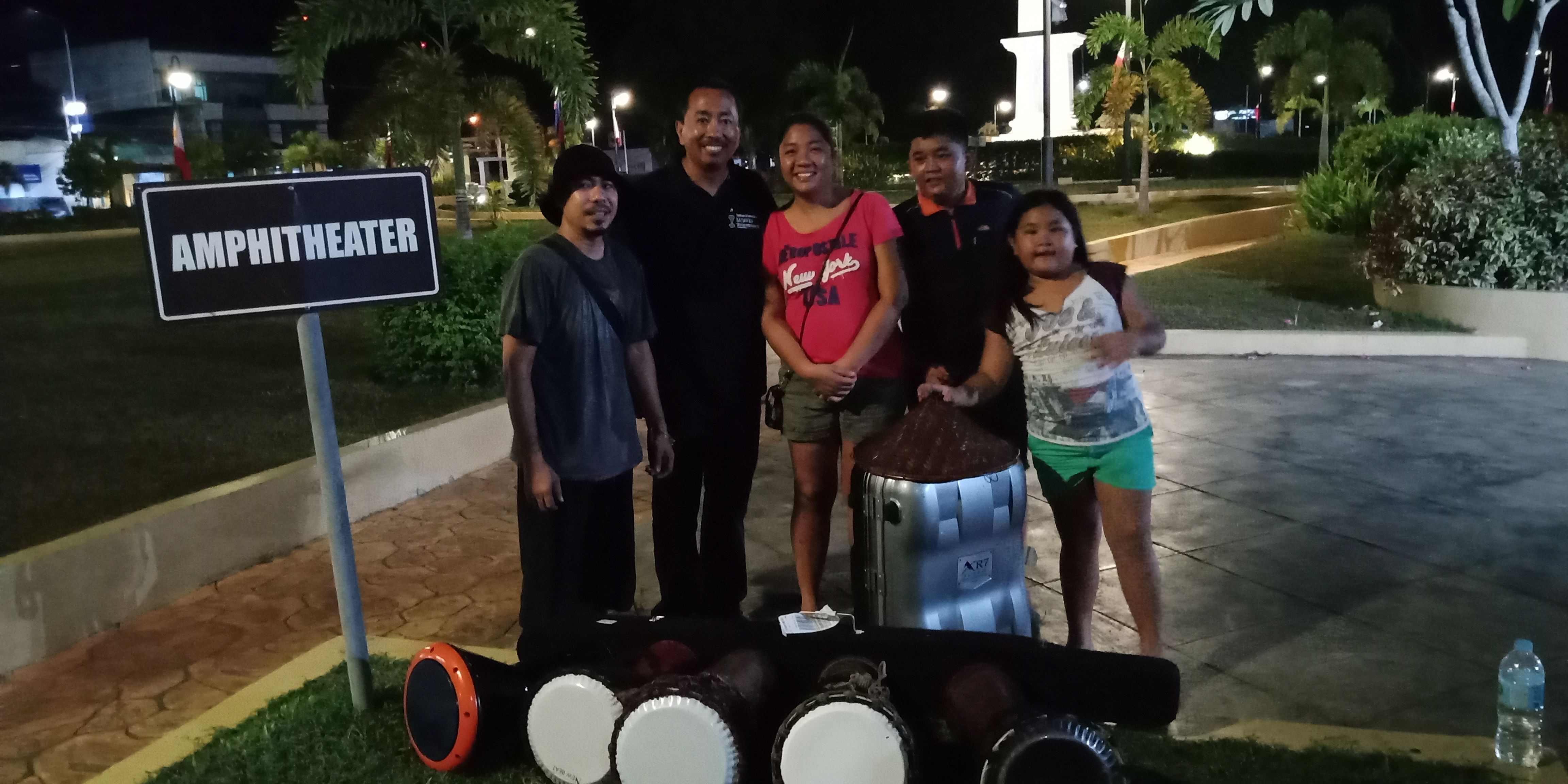 The next day, and at the middle of the street of the Paunay Public Market , we held a similar lecture demo and performance during their Saturday Market. Vendors and people were bustling the street and while we were setting up, they would stop , ask us. They were all eager to know what will happen next . Many surrounded us and took videos and photos. When Sir Richie Mortillero from the Municipal Office introduced me, and he started translating my messages into their language Bisaya, the crowd participated enthusiastically and the children stayed until the night. They were free to play with the instruments. 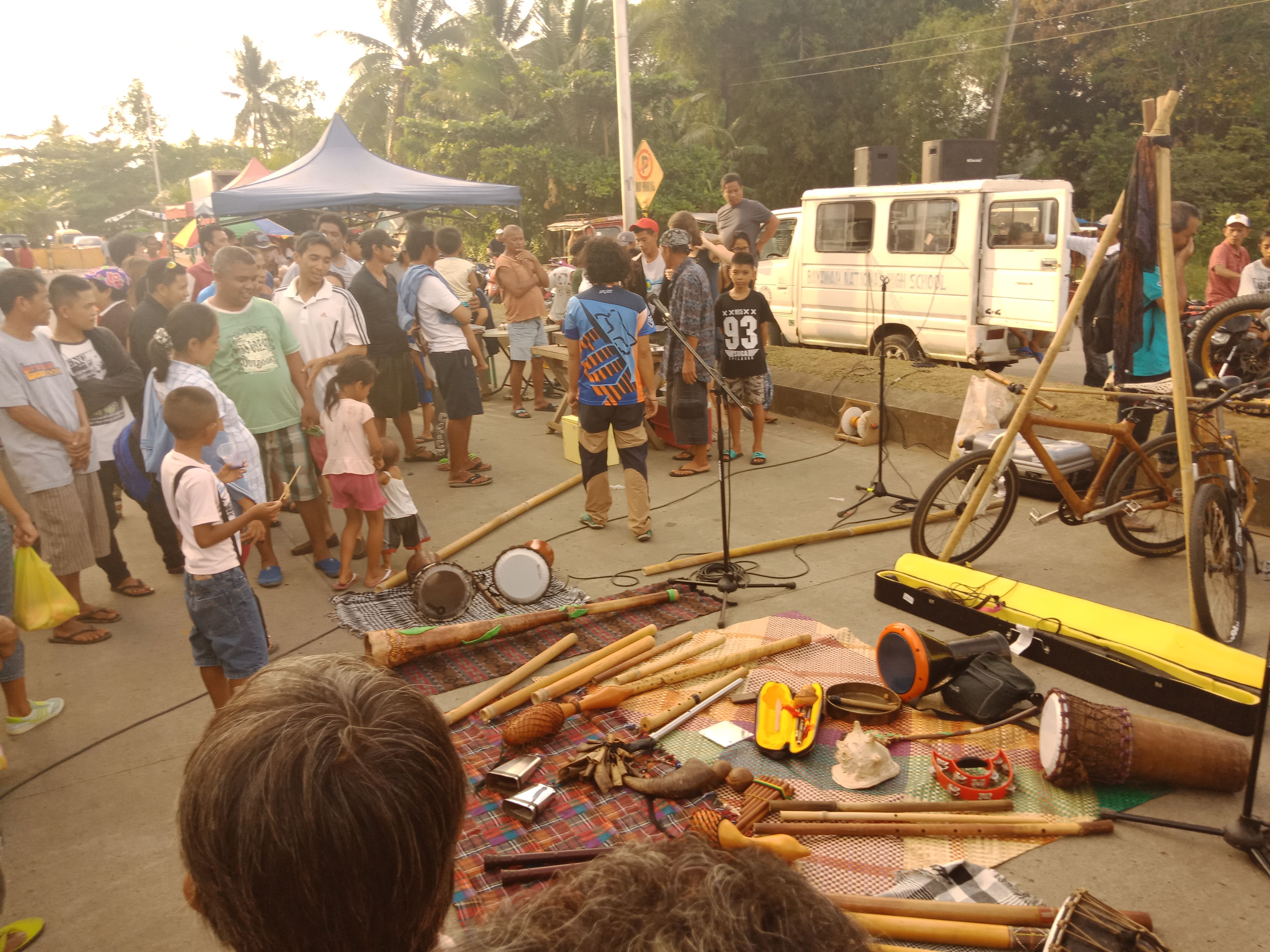 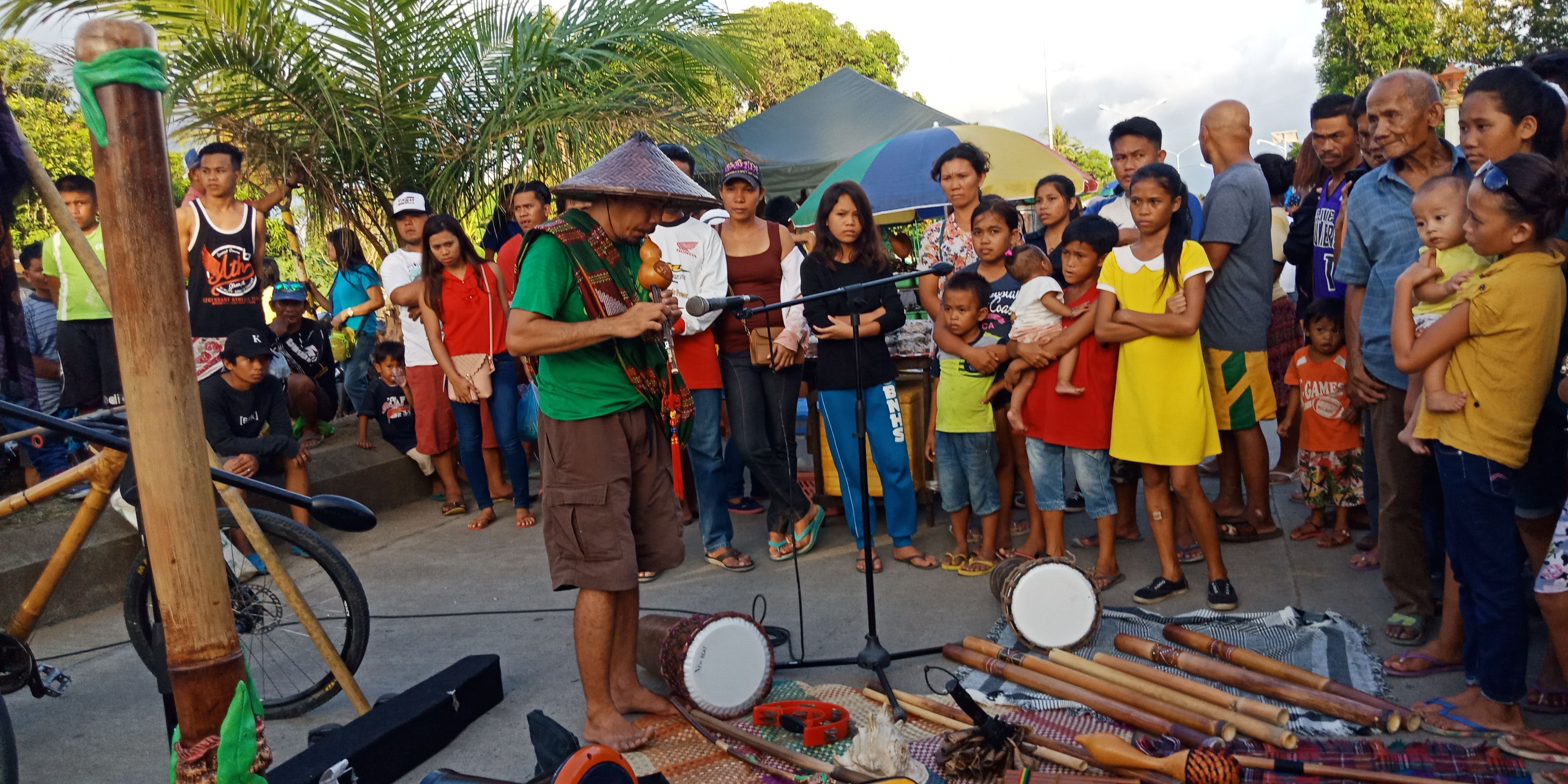 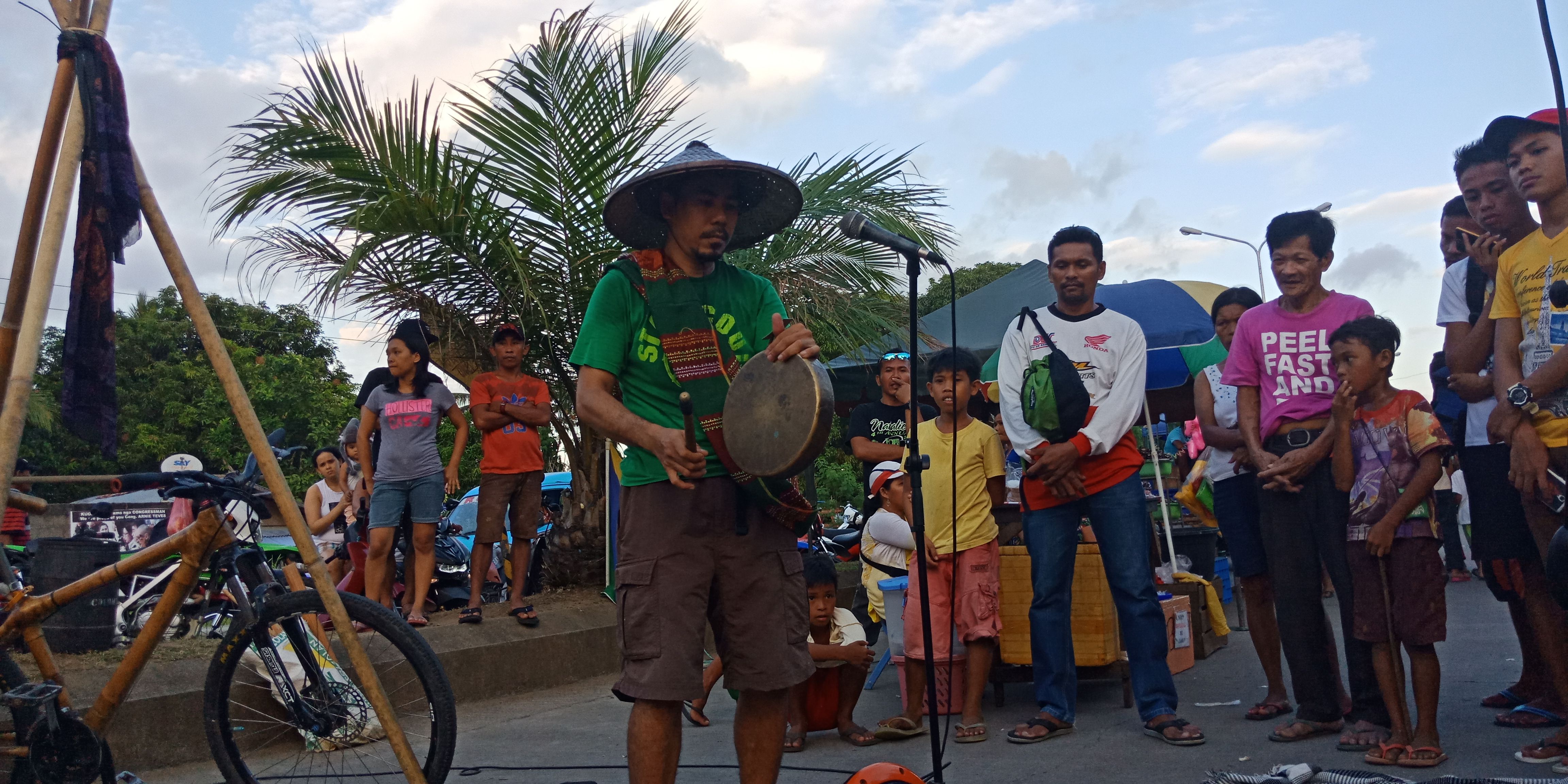 Indeed, this is what life is all about- to be one in harmony. I could say this is truly pag iisa at sabayang pagtugtog, Oneness and Community Musical Journey. I am definitely looking forward to more sharing and workshops here in Bayawan. See you. Satibay! 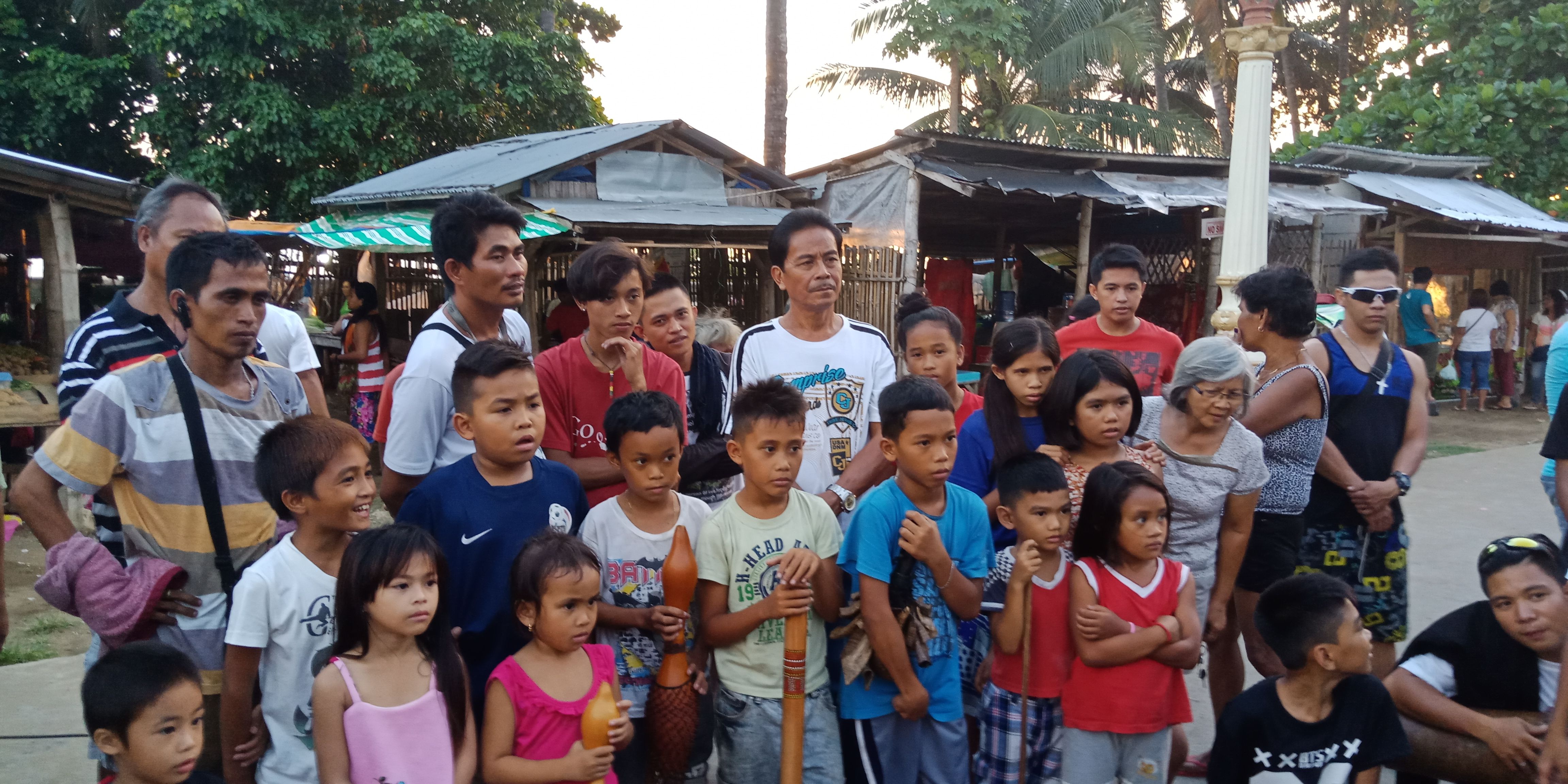 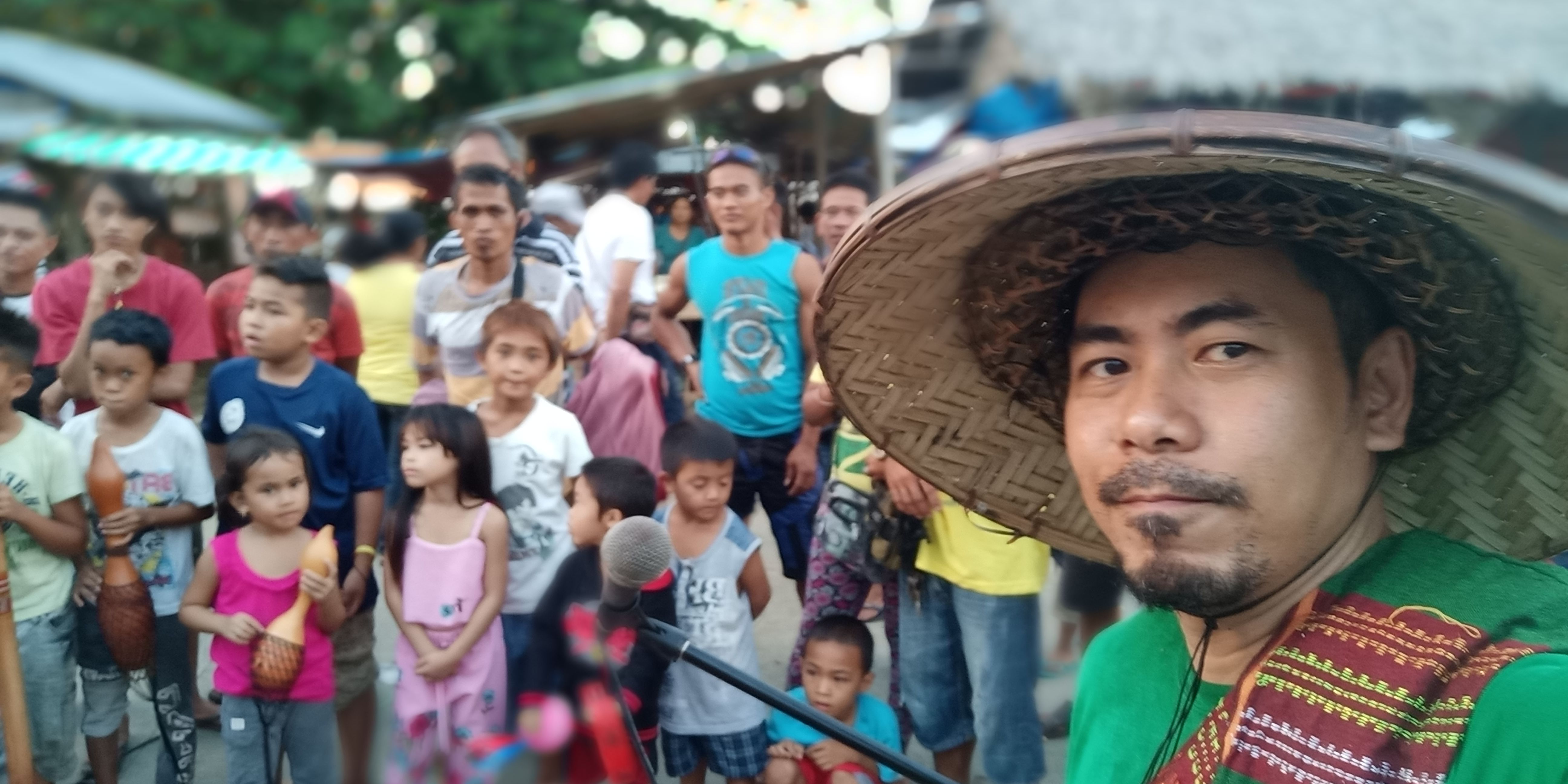 Oppo F5 was used for the Photos taken by the author 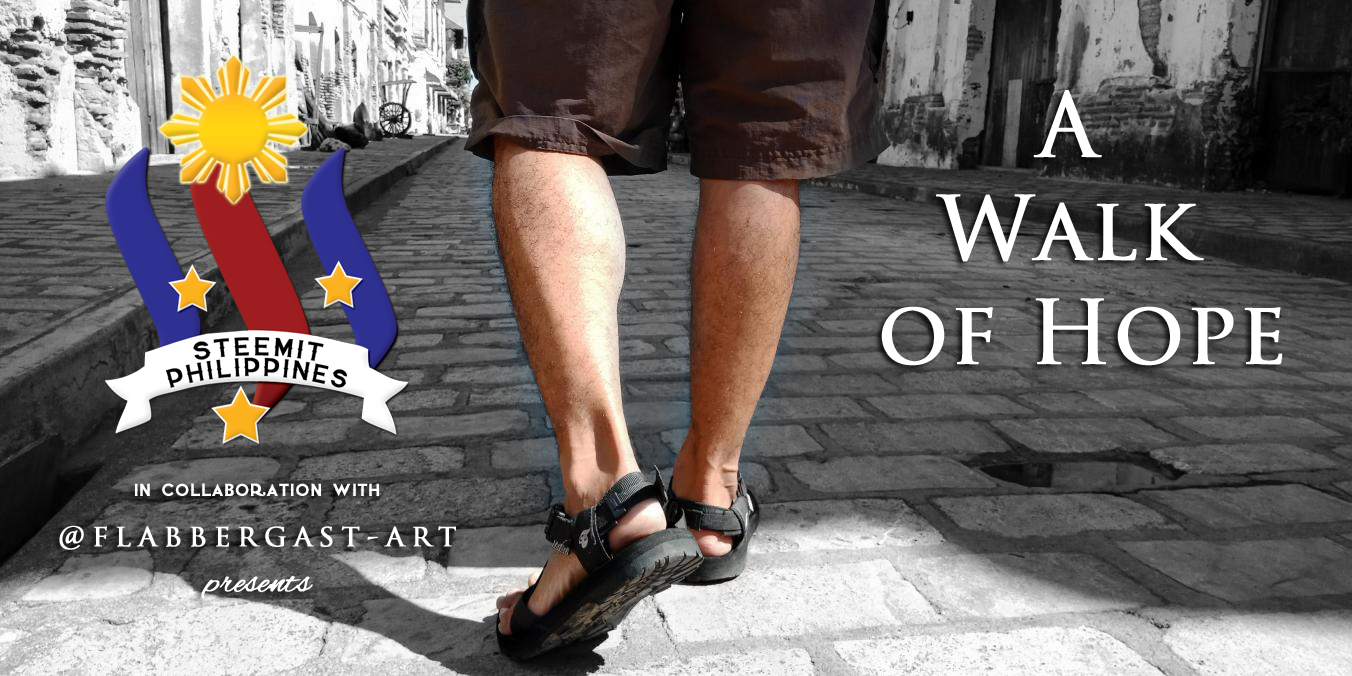 steemph walkofhope philippines music arts
3년 전 by flabbergast-art49
$3.38
36 votes
댓글 남기기 7
Authors get paid when people like you upvote their post.If you enjoyed what you read here, create your account today and start earning FREE STEEM!
STEEMKR.COM IS SPONSORED BY

Satibay ate @immarojas there will be lots of street performances in every town in luzviminda....

I thought you said Luzon won't be included?
@flabbergast-art