Russia adds another 25 tonnes to its gold reserves!

The Central bank of Russia (CBR), has increased their gold reserves in February. Russia also bought 19 tonnes of gold in January, with total gold reserves at 1.857 tonnes. 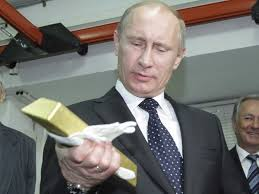 According to the official gold reserves, the CBR is moving ahead of the Peoples Bank of China (PBoC). But we are sceptic about the Chinese figure, given that it has reported zero increase in its gold reserves for 15 straight months now.

steemsilvergold investors-group gold russia news
5년 전 by chinchilla51
$0.12
7 votes
댓글 남기기 2
Authors get paid when people like you upvote their post.If you enjoyed what you read here, create your account today and start earning FREE STEEM!
STEEMKR.COM IS SPONSORED BY

Incredible that Russia has pulled ahead of China in official purchases, considering the relative size of their economies....I highly suspect that China is discreetly accumulating at a rapid pace.