So close, no matter how far: Concept of Limit

So close, no matter how far

I’d like to start this post off quoting one of my favorite artists who always inspire me to do maths, Metallica. Yes! I’m not kidding. Distractions can do nothing if you have the power of heavy metal piercing through your soul.

Anyways, you might have probably guessed the theme of this post. If the title did not give you enough clues, here’s a hint. It’s about limits. What exactly is the limit? Something that separates a man from God? Or perhaps you from your superhero? Or maybe you from approaching a girl. Mathematically, limits have the same sense but these senses get quantified into more perceivable forms of what you cannot perceive.

Let me try to get through to you through an anecdote. Think about it like this. A frog tries to get to a well. He’s a lazy from and so, decides to take half the step he previously took. So, will he ever reach the well? Stay tuned to find out! (Now you want to know, don’t you? ) . Now, let's move into real maths.

The concept of limit is one of the most important concepts in mathematics. It is the fundamental concept in the development of calculus. Also, it is a simple concept to grasp. I will try to make it even simpler using figures and examples.

Limit, here we mean limit of the function. The mathematical symbol for the limit is given below.

What is the function?

let X and Y be any two non-empty sets. Then the relation from set X to set Y is called the function if every element of set X is associated with a unique element of set Y.

It is denoted by

x is the element of X

y is the element of Y

Let us break down the formal definition;

(Source: self=drawn in A4, scanned by camscanner app)

What is the value of the function?

Let f be the function from set X to set Y and x =a be any element of set X. Then, the value f(a) of set Y in which x=a in set X is associated is called the value of the function f(x) at x=a.

If the value of function i.e. f(a) is undefined, the function f(x) doesn’t exist or defined for x=a.

is the value of function at x=1;

= undefined. So, the function is not defined at x=2.

Let x be any variable and

Again, let x takes a value of 1.1. It is close to 1. But, 1.01 is closer to 1. The closeness increases with the increase in number if 0 in between numbers. Due to 1 at the end, the value will never be equal to 1. That means, the numerical difference between x and 1 will be some small non-zero number. We say that the value of x is approaching 1 from the right. It is denoted by

For the value a, we can write that

In this section, I will explain famous two examples to give you the intuition of the limit. The first one is using regular polygon inside a circle and other one using a sum of series. 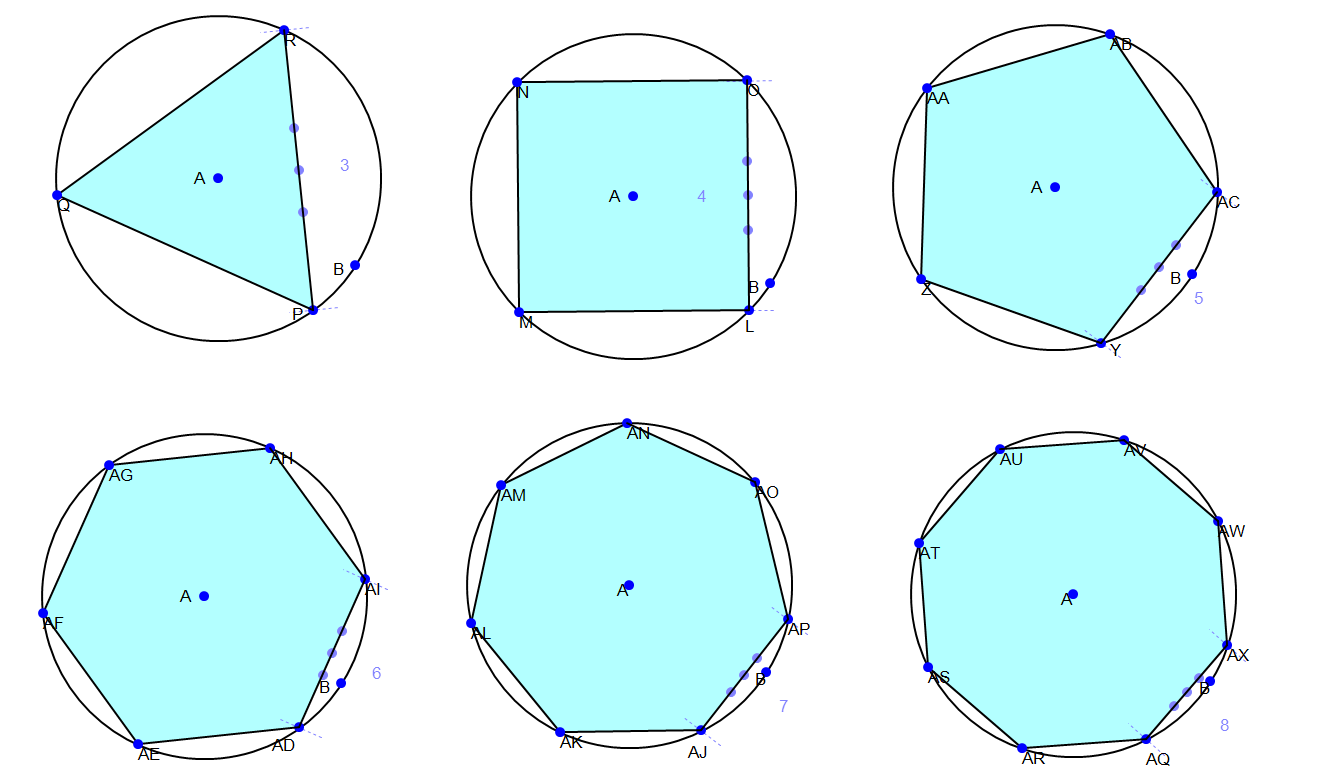 (Source: Self, Drawn in Math Illustrator)

Let S(n) be a sum function which gives the sum of series unto n. Then,

Making a table for the other values.

From the table, we can see that the sum approaches 2 as we increase the number of terms. However large number we choose the sum will never be 2. We can make the sum sufficiently close to 2 by increasing number of terms. We can prove that the limiting value is 2.

It is geometric series with common ration ½. So,

When n becomes sufficiently large then

becomes sufficiently small that we can neglect it. So, the limiting value of the sum of series is 2.

We can denote it by;

Limit of a Function

that is when x

Hence, we can finally define the limit of the function.

Let us consider a function f(x) =

Thus, we see now what a function is and how it can be limited in its sense of value. A limit poses a restriction to a function or even the way the variables in a function, approach a value.

Now that you know about limits, you have known another part of Mathematics you’ll never use in your life ever again? Really?? Hell no! The limit is everywhere. Limits are the very basis of Calculus. “But Bikki, we won’t use calculus ever again either!” Are you for real right now? Calculus is used in all fields from modeling of physical situation to cryptocurrency.

So, Does the frog ever reach the well? I hope to see your answers in the comment.

steemstem steemiteducation mathematics science busy
3년 전 by bikkichhantyal52
$44.90
178 votes
댓글 남기기 9
Authors get paid when people like you upvote their post.If you enjoyed what you read here, create your account today and start earning FREE STEEM!
STEEMKR.COM IS SPONSORED BY

though i am out of these ideas. it is realy innovative. great job

You could also think about limits as a mathematical object which tells you how to make a function continuous.

For example in your case f(x) =

can be extended to the function

Observe that this function is continuous.

In the case when you are dealing with infinity there are mathematical methods which let you apply the same trick.

This is the reason why we consider limits for functions.

First of all, sorry for the late reply
and secondly, thank you for the suggestion.

I think I have properly defined infinity in this post. How to tackle that can be subject of the next post.

You can substitute continuity in my reply by approaching something. It is not necessary to define it formally.

In terms of a series or sequence your approach makes sense since they are discrete since they are evaluated for 1,2,3,4 etc. But limit in the sense of this function f that you used is in a sense different since you are relying on its continuity by approaching in a continuous sense a certain value.

The point of using that example was that the limit can exist without function being continuous. we can intuitively see the function is not continuous at x =1, but we are not interested at exactly that point. We are interested in how the values are approaching. I may be relying in the concept of continuity at other points than x=1, but I still dont know why should I make function continuous at x=1.