My love for drones started in 2011, when “Osama Bin Laden” was captured and killed. I saw the monumental task drones performed in the surveillance of the terrorist. As i watched top military personnel speak on the television about the incident and how drones have played a vital role in preventing numerous terrorist attacks and has made operations easier for the military.
However, I became more fascinated by drones this past few years as application of drones increasingly began to find use in several other sectors such as Photography, weather analysis, video coverage, commercial contracting, search and rescue, forestry etc In recent times drones have become a part of the everyday life of some businesses and individuals because of the immense way it has contributed to the ease of operation of different professionals, businesses and hobbyist in their daily activities. This can be attributed to massive investment in drone technology especially the business and consumer drones which has led to the fast pace of drone technology.

Due to new innovations and the constantly evolving drone technology, drones basically come in different shapes and sizes depending on the use. From the largest and most advanced drones such as the Predator drone used for military purposes to the smaller drones which can be launched from the palm of one’s hand

At this point let me not fail to point out that initially drones were developed for the military to carry out surveillance and intelligent operations since it completely eliminates “human sacrifice” scenarios and lowers insurance. The drones were primarily created to eliminate risking lives of the personnels and perform various tasks such as providing tactical support, hacking purposes, to observe traffic, bomb detection, dropping missiles etc at the lowest risk possible.

With so much advancement in technology more variant of drones are being produced regularly and Drones are not only used in fields that involves risking lifes such as search and rescue, locating defects in structures, Carrying information to inaccessible locations.
Drones are now so sophisticated and depending on the state of the art feature of the drone, they have a wide range of activities in various Commercial fields that have facilitated productivity in ways that are unimaginable for example in agriculture drones are fantastic tool for commercial farmers because it helps them to monitor their vast fields and livestock’s

It also helps construction engineers see their projects from all the angles and help to spot errors and facilitate accuracy in their construction.

Drones are now a core part of film industry, News reporting, photography because it has made production easier for professionals.
once the drone is programmed with a GPS location, the drone could fly itself to the exact location and await further instructions while it holds its position or the drone can follow the user around by tracking the signals from the user’s mobile phone: this feature is called the “follow me mode"

In the field of electronics, aeronautics and robotics drones are one of the most advanced equipment and By now you would realize that Drones are combination of all advanced technologies, working perfectly together to deliver to the user a worthwhile performance for the different application it is used for.

What then are drones?
Technically drones are referred to as “Unmanned Aerial Vehicles” (UAVs). Drones are aerial vehicles which are controlled either by remote or control systems from the ground or it can work autonomously as per set mode.

In a simpler way I like to refer to drones as a flying robot or computer. The physical components of the drones are controlled by the intelligent software installed in the drones, and this software also help to effectively manage the drones from a remote unit.

Parts of a drone

Most drones basically consist of some similar system, so right before I discuss the operations of a drone I would like to give a brief insight about some of the basic components.

How do drone works

Now that we know the basic parts of the drone, I can now show you how these parts work together to achieve flight and smooth operation.

The navigation systems and sensors in the drone are located in the nose of the drone and depending on the size of the drone, they can either be launched easily by hand or they would require a short runway for it to take off

To reduce weight and ensure increased maneuverability, drones are mostly made up of light composite materials that can absorb vibration which in turn decrease the noise, the strength of this materials ensures determines the altitude to which the drones can fly.

The launching, navigation abilities, landing and general movement of the drone is determined by the controller. Proper communication channel between the radio waves and the remote unit’s communication is established by the Controller. For example, some controllers a boxy unit with two thumb joysticks and a collapsible antenna and use 2.4gigahertz radio waves or some look like a gamepad or some could use software programs on smartphones, tablets or computers. 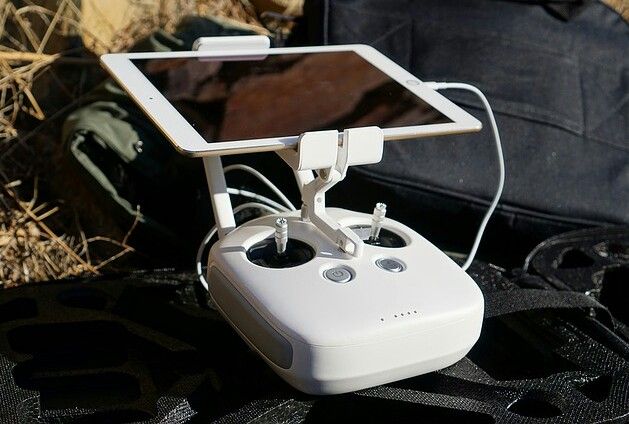 However, if the Lift of the drone is really small the drone would moan, groan and eventually crash and in some cases the drone might not get off the ground.
The direction and altitude of the drone is changed by the spin of each propeller relative to the other.

For the drone to tilt to one side, this can easily be achieved by creating more lift on the side of the drone we want. So basically for the drone to tilt two of the rotors spin faster on side, when this occurs some of the upward lifts turns into a sideways force. At this point the drone can now move forward or backwards.

I am sure by now you understand how drones make certain movements, but you don’t need to worry about all the details because the algorithms and code built into the drone does all this automatically at the push of a button and apply the necessary power to each propellers when required to make movements.

For the drone to maintain its orientation in space, drones make use of Accelerometers and gyroscopes, without this instruments in place the drone cannot fly safe and can easily crash to the ground or even injure the user or any unsuspecting individual. This instruments detect all the directional cues such as linear acceleration, tilt etc and ensures the drone doesn’t crash.
The sensors on the drone determines the speed, altitude and motor rotation as well as help the drone stay in the air for long period and adequately ensure the drone maintains the required height and in the required direction.

The drone makes use of specially designed multi propellers to reduce failure such that if at any point any motor in the drone stops working, the drone keeps flying regardless because the drone gets its support from the propellers working in groups. The multi propellers is thereby a key component that ensures the drone is independent. However, nowadays drones come with automatic features that help reduce risks and simplify some of the difficult aspects of flying drones such as the landing assistance.

There is no doubt that drones are truly an engineering spectacle, it is the combination of all advanced technologies, working perfectly together to deliver to the user a worthwhile performance for the different application it is used for.

Drones are useful equipment for professionals, companies as well as the military. However, drones are more or less like flying computers, with an operating system, main boards with programmable code, flight controllers and they can also be hacked if proper structures are not put in place, so if you intend buying a drone anytime soon be sure to protect your priced possession from hackers.

New innovations and modifications are constantly being done on the structure and internal electronics of a drone and all the latest drones have advanced intelligent flight controllers and fantastic modes like the follow me feature, Active tracking, Waypoints and the Return To home modes etc

what is a drone and how does it work
what is drone technology
drones
how do drones Fly
drones: what are they and how do they work

steemstem stemng technology science ocd-resteem
2년 전 by dannybravo9449
$35.85
230 votes
댓글 남기기 15
Authors get paid when people like you upvote their post.If you enjoyed what you read here, create your account today and start earning FREE STEEM!
STEEMKR.COM IS SPONSORED BY

Drones have always been fascinating to me. I go to the extent of downloading diy videos hoping to build one for myself someday. Nice post bro. In the future, we cn start sending gift boxes and hand written letters to each other via drones lol... but when these things become more common, maybe there'll be avenues to charge them while on air or what happens to them when the battery suddenly runs down?

I saw life performance of a big drone few weeks ago. To answer your question, the drone flew back to its exact position when the battery was getting very low

Exactly.... It All boils down to the level of Sophistication of the drone

Oh... thats cool. That must be the "back to home" function the post mentioned. Thank you.

I can't agree more.... Infact the likes of Amazon are investing massively in drones to facilitate Easy delivery....

To answer your question about batteries @mykelade: it All depends on the Sophistication of the drone... Some drones have the "back to home" feature where the drone automatically returns to the user when the battery returns to a certain level

Drones are wonderful things i have always looked at..

Great job with the education.

Thanks for stopping by to read @adetola

My love for drones started in 2011, when “Osama Bin Laden” was captured and killed.

I dnt see many people staring a article with name of Osama, lol..! :D
Anyways, Ur article is good..! Try to add some more photos in next post, a few photos among the loong paragraphs are pleasing to reader's eyes..!
Best wishes..!

Oh yea...starting with osama was intentional...

Thanks for the tip

Drones are earlier stages of UAV. UAVs are the future of air transportation. A lot of factors are still being investigated which are hindering its commercialization. Scintillation one of such. Its amazing what technology has brought to mankind. Great post

Yes... You are right on Point!
The basic hindrance to the commercialisation of drones is Privacy and Control

Congratulations @dannybravo94! You have completed some achievement on Steemit and have been rewarded with new badge(s) :

Just when I thought I was the only one going crazy about drones! Great to know I have like minded persons out there too. Thanks for sharing bro.