Hey guys, Welcome back to my blog. It is a beautiful day and another opportunity to explore the world of engineering.

One of the most challenging projects I have ever been involved with was during my internship with the transmission company of Nigeria in Ibadan and I was opportuned to be part of the team that installed a 150MVA 330/132KV transmission substation to increase transformer capacity at the station. It was a really tasking time but also a fantastic experience.
That experience gave me this deep love for electrical transformers. So today I would be focusing on the operation of an electrical transformer.

Transformers definitely not the movie An Electrical transformer is simply an electrical device that transfers electrical energy by electromagnetic induction from one circuit to another. It is used to Step up or Step down Voltage without changing the frequency.

Why are transformers so important to power stations?

Transformers are one of the most important parts of power stations because they play a major role in reducing power loss. Power systems transformers are used to step up or step down voltages depending on the need.
For instance, with increase in voltage, current decreases, so to minimize transmission losses voltage is stepped up at the transmission end while at the distribution side the voltage is stepped down to the required level.

How do transformers operate? 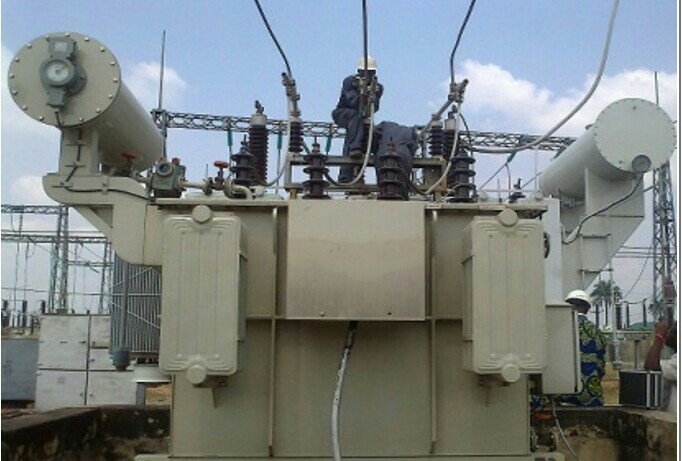 image of a transformer at Ayede transmission station by @dannybravo94

That’s not All …Electricity is so cool, don't you think?

In order to make electricity pass through more efficiently from the primary coil to the secondary coil they are wrapped around a soft iron bar usually called a CORE. To make a curl of wires we curl them round into TURNS.
For instance, If the secondary and primary coil have the same number of turns, the electric current in both coils would virtually be the same.

Now, this brings US to step-up and step down transformers which I would explain briefly

In a step up transformer the secondary coil has more turns the primary coil, hence it boasts a low voltage into high voltage.
As a result of this a bigger secondary voltage and a smaller secondary current is generated.

Now taking a closer look at both transformers you would realize that the coil with HIGHER number of turns would have HIGHER VOLTAGE, while the coil with FEWER turns have HIGHER CURRENT.
You see how simple and straight forward it is…

The role of transformers in power stations for transmission and distribution cannot be overemphasized and I am sure by now you understand why I love transformers with so much passion.
Just in case you are wondering why transformers are rated in KVA: Its simply because transformer losses depend only on current and voltage.
There you have it………

steemstem stemng science engineering ocd
4년 전 by dannybravo9449
$0.08
5 votes
댓글 남기기 5
Authors get paid when people like you upvote their post.If you enjoyed what you read here, create your account today and start earning FREE STEEM!
STEEMKR.COM IS SPONSORED BY

The electric transformers are a very important aspect in power generation. I remember when our transformer had problem and we didn't have light. Was really bad.

I also recall these from electrical machines at undergraduate level. Well done.

@lawkay did something about electricity today too, it's nice to be learning about the science and art of electricity.
Thumbs up bro

as brief as this post is, about 20% of it is a plagiarised content. This is not acceptable to us at steemstem.

@gentleshaid I have spotted the problem and it is the laws i stated .. The fact that I am new didn't let me know how its done.
I would be more careful when stating laws subsequently

I noticed the same thing. I guess newbie error.